The Magnolias came to us at about 3 months of age. They’d been put in a carrier and abandoned at a local business, where they were luckily discovered before it was too late. They were found to be healthy, so after they were spayed and neutered and id chipped, they came here for a short while. They were hissy and growly for the first few days, reacting to the trauma they’d been through. After they got that out of their systems, they warmed up quickly, and their playful, lovebug nature shone through.

They were named after characters from the movie “Steel Magnolias.” Drum is the sole boy; M’Lynn, Truvy, Clairee, and Ouiser (pronounced “Weeza”) are all girls.

You can read about these guys beginning with this entry (there are links at the top or bottom of each entry; click on the one on the right to take you to the next one).

Exactly a year later Drum and Clairee, who had been adopted together, were returned to Challenger’s House. They stayed here with us for a couple of days (read about that beginning here), and then went to Petsmart where they were adopted again – together. Clairee passed away unexpectedly in 2015. After about a year, it was decided that Drum needed a companion, and Branwen (originally Juniper) was adopted as his new sister.

See all the pictures I’ve taken of this bunch over at Flickr or scroll through them below. 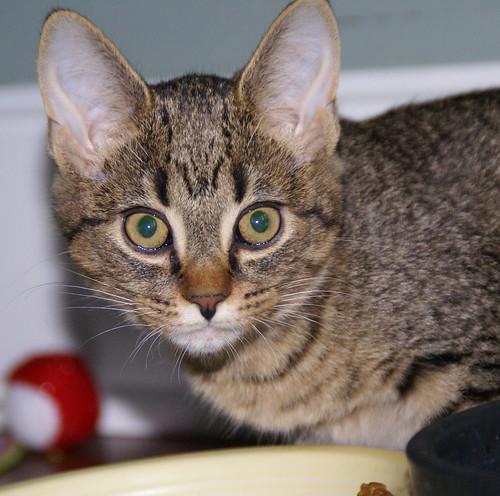