Privet was the first Evergreen kitten to come to us, on July 15, 2016. I was on vacation in Maine, and Fred told me that a kitten had shown up on the side stoop. It took him five days, but he finally trapped her and brought her inside. She was a little scared at first, but warmed up quickly and showed Fred that she had an instant purr.

I knew that she needed friends – Fred told me that she was bored – so I asked fellow Challenger’s House foster mom Winnie if I could have her fosters, who were a bit older. She kindly acquiesced, and two days after I got home, I went and picked them up from her.

Spruce and Cypress (boys) and their sister Juniper joined Privet on July 21st. Their story is that, when they were little, a Challenger’s House volunteer spotted them behind her business in Huntsville. When Winnie and Kathie showed up to trap the kittens, they discovered that there was also a mother! So they trapped the mother as well. Winnie fostered them, and Willow went off to Petsmart (she was adopted on August 2nd), and a few weeks later, her kittens came here.

Hemlock joined us on July 23rd. During adoption hours at Petsmart, Winnie decided to walk across the parking lot (on a scorching hot Alabama July day!) to go to Michael’s. She heard the sound of a kitten in distress, and tracked the sound down to a car. Poor little Hemlock was up inside this car, and with the help of Kathie and Frances, Winnie removed Hemlock and rushed him to the vet. After an exam and some rehydration, Hemlock was ready to go, and he came here. What’s one more, right?

There was some hissing and growling between the kittens when we threw them together (not from Hemlock, though – he loved the other kittens immediately!), but now that they’ve been together for a while, they all play and snuggle up like they were always together!

About the naming theme: Spruce, Juniper and Cypress and their mother were trapped on Willow Drive. Their mother became Willow, and the kittens were named after trees. Privet was initially named Meowth – I figured, the sooner I got her named and into the Challenger’s House “system”, the less likely she’d end up becoming a permanent resident, so I named her before I ever saw her. However, once I knew I’d be adding the other three kittens (who were already named) to the foster room to join her, I figured I’d go along with the name theme that was already in place. I initially named her Hemlock, but Fred told me that before he’d been able to trap her, her favorite place to hang out was in some Privet growing along a fence. Here in Alabama privet is an evergreen, so Privet she became. And a good thing, too – two days later, we needed to use the name Hemlock!

You can read about Privet, Spruce, Juniper and Cypress beginning here, and Hemlock beginning here. There are links at the top and bottom of each entry; click on the one on the right to take you to the next entry. 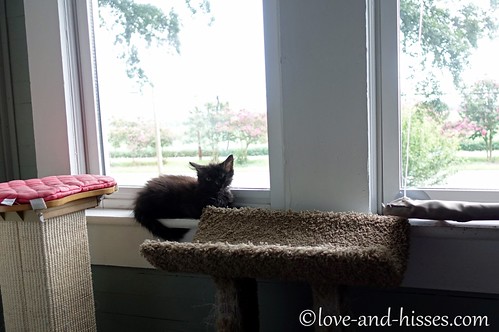