Robyn, could you tell us again about the cat fence you have? What’s the brand? I’ve got a co-worker who is determined that their cat should go outdoors. Currently, they just have a wooden fence and the cat can climb it, so I’m trying to suggest a better solution! Thanks!

It’s the Purrfect Fence, and there’s a post about it here (if you scroll down to the bottom, there’s a picture that shows just how it works.) There are two kinds – one is a standalone mesh fence, and then the one we have, which is the conversion system that attaches to an already present fence. It works great for us – the few times a cat has escaped the back yard it’s because they found a spot under the already standing (wooden) fence where rainwater has eroded enough dirt away from the fence that the cat could get under. (Interestingly, since Kara died last year, no one has escaped the back yard at all. Hmmm….)

Canasta is such a present mom. Loved seeing her try to play with them in a vid you posted yesterday. Have you had other moms like that?

Most of the moms we’ve had would play with their kittens, though the younger moms tend to play more. I’m looking forward to the kittens getting older and being able to actually tussle with her – I suspect she’ll enjoy that quite a bit!

Canasta always has something to say…is she talking to the kittens, you, or herself?

All three, I suspect… to the kittens so they know she’s there (and where she is), to me she’s saying “I hope you’re keeping an eye on them!” and to herself she’s saying “There’s little whatshisface… where’s the other one, the one with the freckle, oh there she is… Is this all of them? It feels like more than this sometimes…”

I have never seen a mother nurse her kittens sitting up like Canasta does. So funny! Have any of your other foster mom’s nursed in that position?

Khaleesi did it once or twice, but never to the extent that Canasta does it. I love it so much!

Canasta is one of the best moms ever. Or are all moms like that and I just don’t remember?

All my mamas have been flat-out amazing! Some mamas were more into the mothering thing than others, but we’ve been REALLY lucky.

Ha! I remember that trip to the dealership like it was yesterday. (And if I never had to visit another one in my entire life, I’d be happy about it.)

Guess what the kittens are doing now? 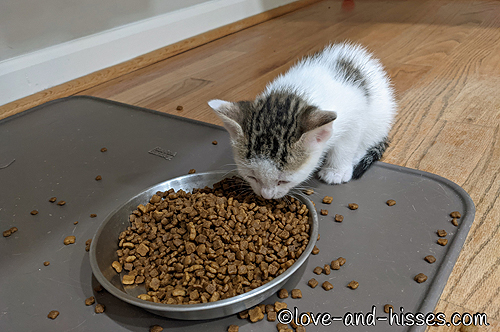 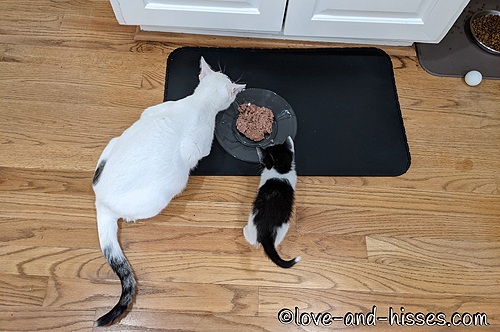 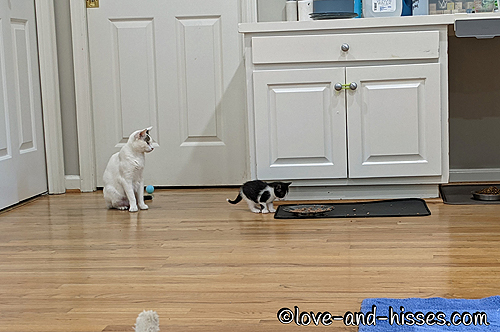 At this point I’ve seen everyone but Pinochle at the food bowl or the plate of canned food. I mean, don’t get me wrong – they’re still nursing and I’m sure will continue nursing as long as Canasta lets them do so. But they’re eating solid food – and like a week ago they were still wobbling around their crate. 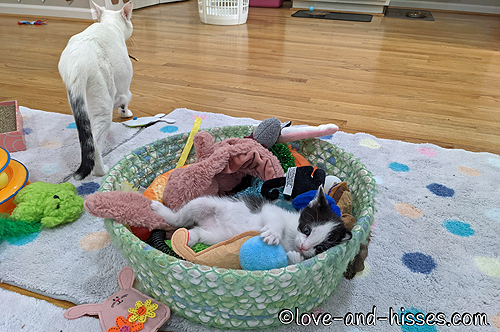 They’ve discovered the basket of toys and find it comfy. 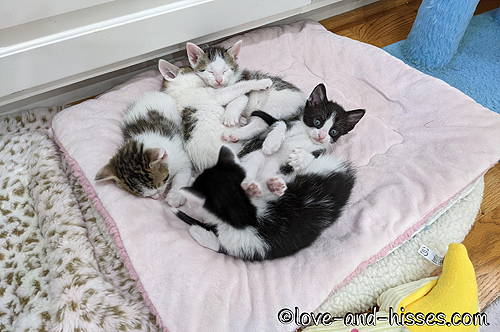 Talk about your cuddle puddle. 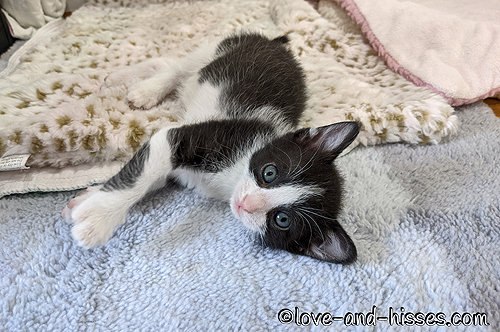 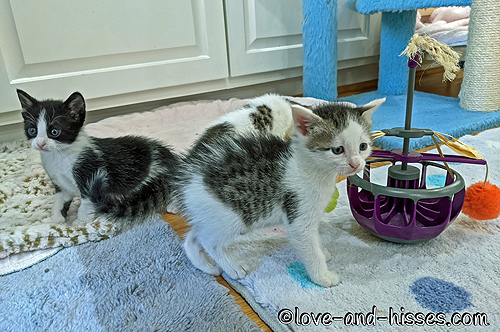 I wish I’d gotten a better picture of this to illustrate it, but it turns out that Fizzbin has been voted The Kitten Most Prone to Floof for No Apparent Reason. She does it a LOT. 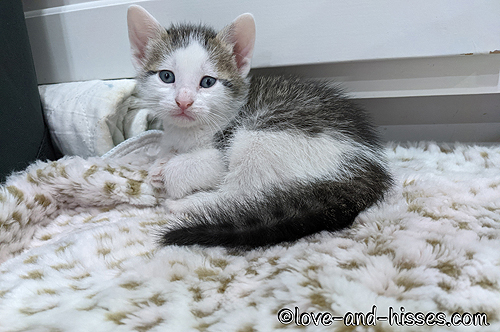 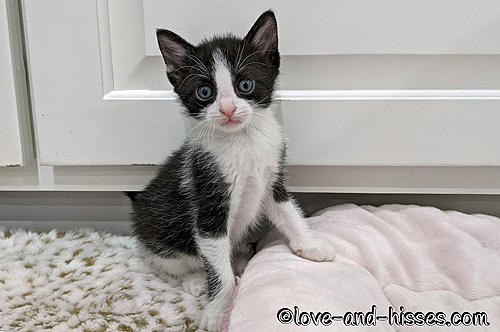 The white eyeliner around Rummy’s eyes really make them pop. 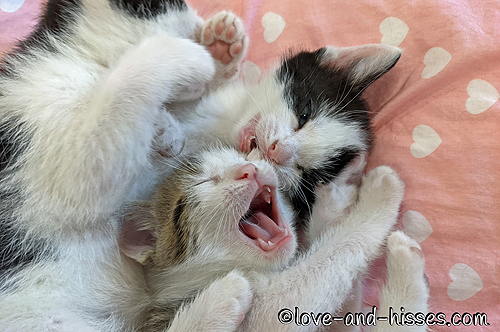 Pinochle’s got his Open Mouth of Outrage going on. 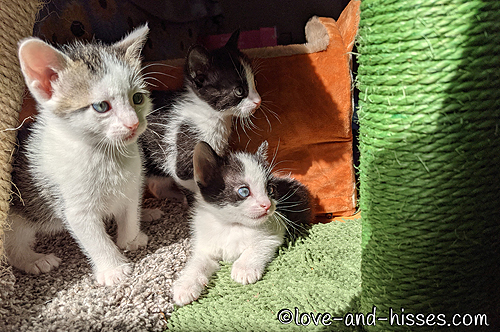 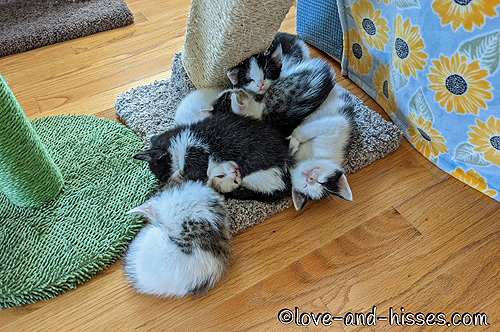 And then they piled up on the bottom of this scratcher because of course they did. 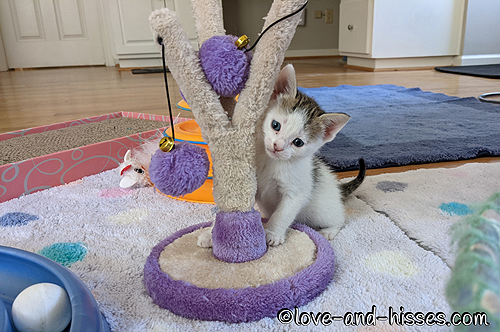 Whist is considering climbing that tree.

The kittens are 5 weeks old today! In the past week they have discovered and mastered the litter boxes – in fact, Fizzbin discovered that with a little effort she can climb into Canasta’s litter box, so that’s the box she gravitates to every time now. I’m used to accidents happening while they figure out the litter box, but I haven’t seen a single puddle outside the litter box at all. They’ve all started eating solid food (I assume Pinochle is, although I haven’t seen him actually doing it. If he’s not yet, he will be soon enough.) They’ve started climbing – not only the small cat tree, but I spotted Fizzbin climbing up the side of the couch (so I put beds and blankets on the floor around the couch just in case there are any falls.) Once they left the crate, I haven’t seen any of them sleeping in there at all. They’ll occasionally go into the crate and play, but for the most part they’re out in the room… all OVER the room.

I’ve seen it a zillion times, but it is still utterly amazing to me how quickly they go from tiny unformed little blobs to mini kittens who know how to use the litter box, run toward me howling when I walk into the room, and floof up. I haven’t seen any skitterbugs yet… but it’ll happen very soon, I suspect! 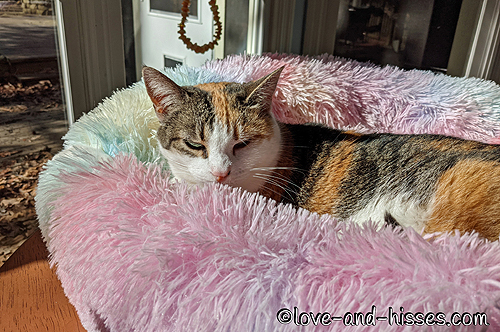 Alice’s favorite bed gets a ton of sun right now. This is her happy face.