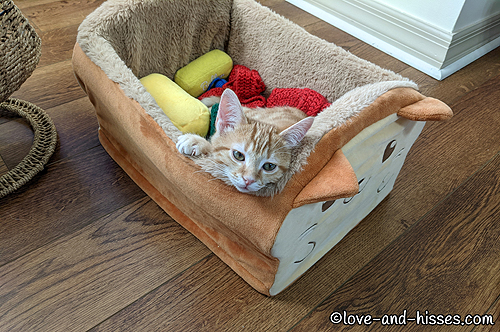 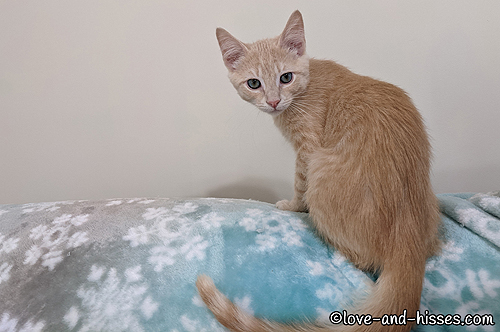 Sammy has hit his long and lanky stage. 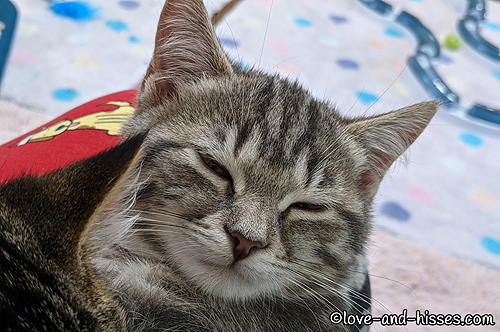 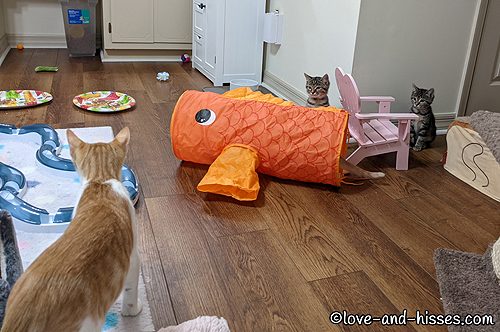 Alfie and Christopher went galumphing through the kitten room, and it put the Elements kittens on high alert. 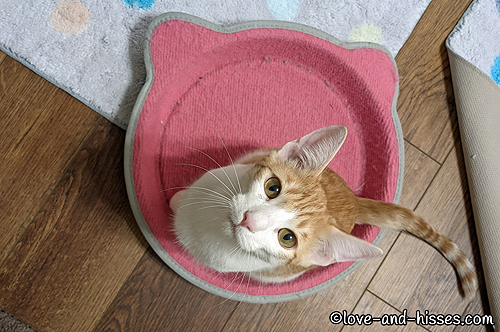 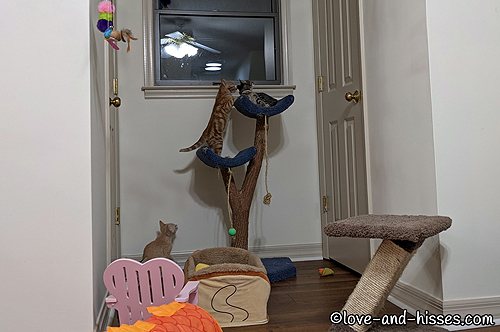 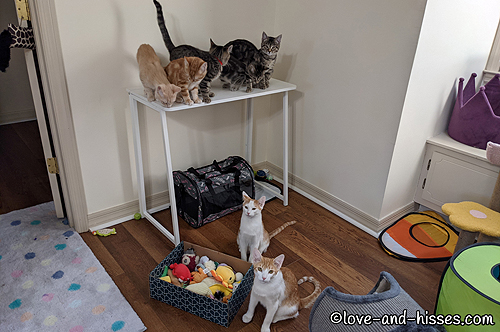 I tried having Churu time on the desk with all 8 kittens and Alfie and Christopher politely noped on out of that situation (but worry not, they got their Churu while they were sitting on the floor.) 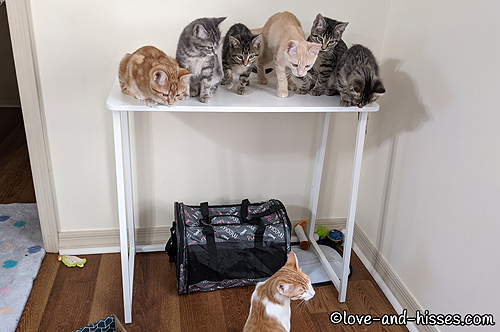 The little kittens were ever so puzzled – “What you MEAN you get your Churu on the floor? That’s not where Churu time takes place! You’re breakin’ the rules!” 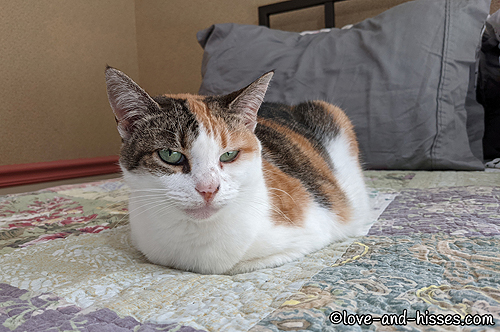 Alice Mo cares for no kittens, but continues to love her Daddy, yo. 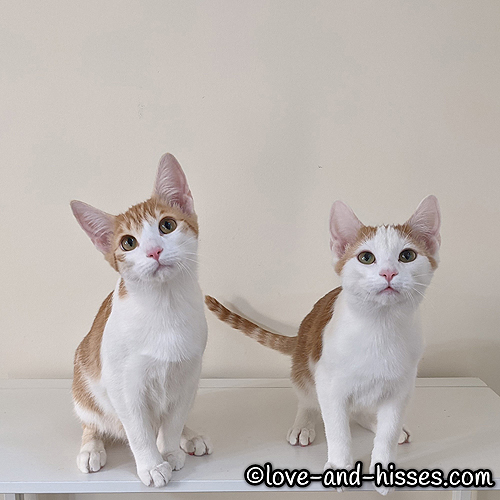 In case you missed it on the blog, on Wednesday I brought Alfie Alfredo (left) and Christopher Chutney home from Petsmart. They’ve been there almost 2 months, so it was time for a break. They’ll be with us for a couple of weeks and then head back. 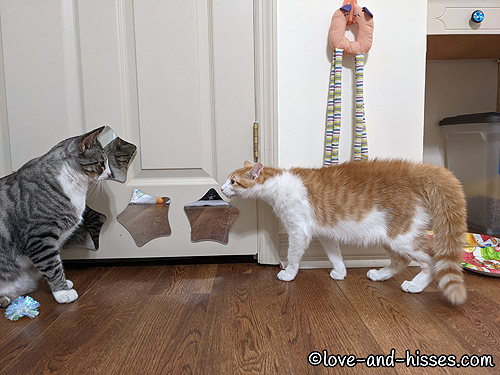 Alfie Alfredo put on his best floof suit to greet Uncle Charlie. (I know they look nearly the same size, but Alfie is literally half the size of Uncle Charlie.)

YouTube link
Wednesday morning I went to Petsmart and brought Alfie Alfredo and Christopher Chutney home so they could get a break from being at Petsmart (they’ll go back in a couple of weeks.) They’re in the foster room with the little kittens, and I made a video after they’d been in the room with the little kittens for a few hours. There was hissing and growling, but (it’s now been almost 2 days) they’ve relaxed a bit. 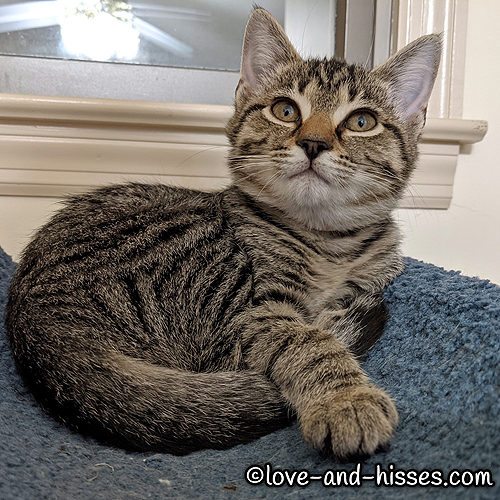 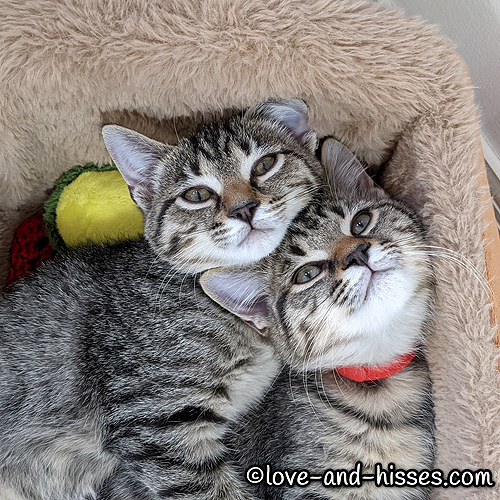 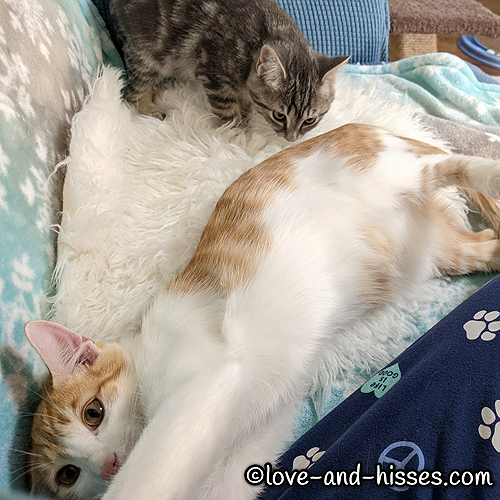 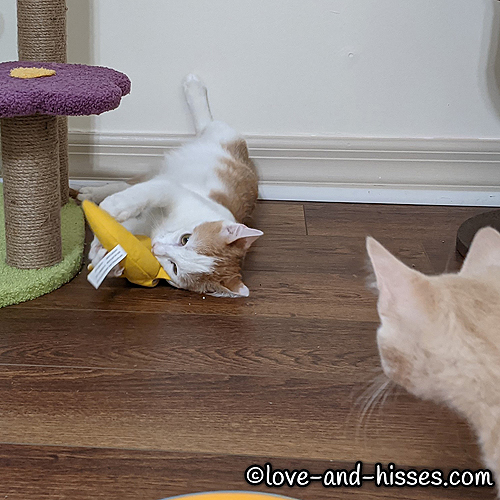 Christopher Chutney was getting hiiiigh off the catnip banana, and Sammy was all “?” 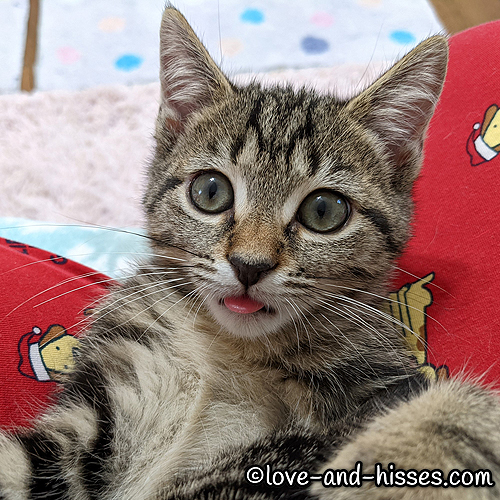 Nikki and the blep.

YouTube link
The Da Bird teaser (made by Go Cat – available at Amazon, possibly Chewy, and at PetSmart) is always popular around here! 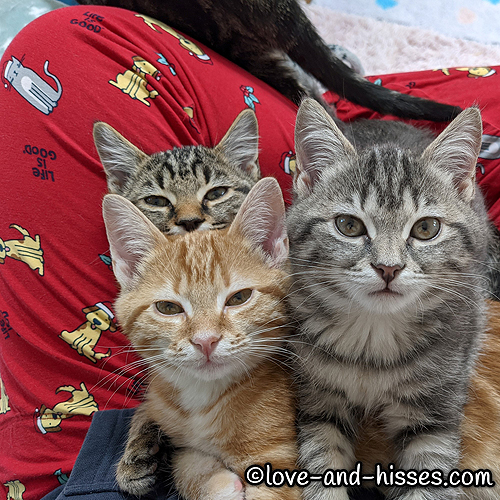 Good night innernets. (Barry, Ozzy and Carli, with Nikki nearby) 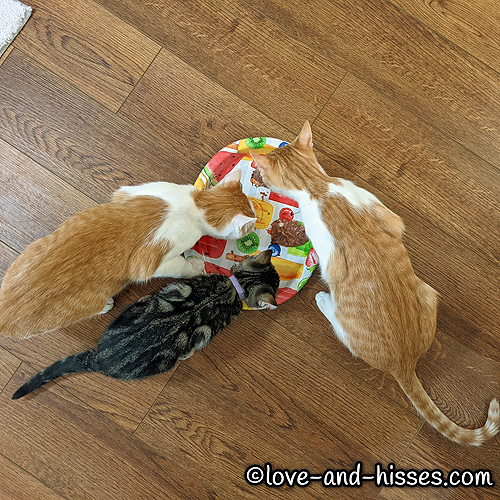 I’ve been feeding Alfie and Christopher on their own plate because they tend to be growly toward the little kittens when they’re eating. This morning Nikki was all “Hey, I wonder what’s on THEIR plate*?” and went stomping over to check it out. And neither of the boys hissed or growled at her! That’s progress.

*The exact same stuff that was on her plate… but apparently it was tastier in this location. 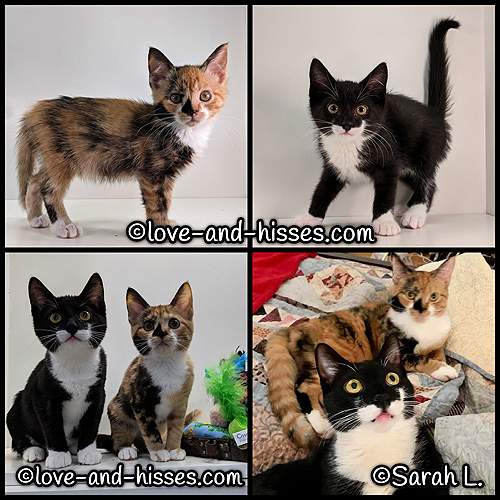 It’s been a year since tiny calico Calamity Jane (now Kiki) and her tuxie brother Davy Crockett (now Mr Mustachio) were adopted, and here they are now (bottom right). He’s still got those crazy eyes, and Sarah reports that Kiki is still tiny but a tough girl who takes no nonsense from her brothers! (Thanks for letting me share, Sarah!) 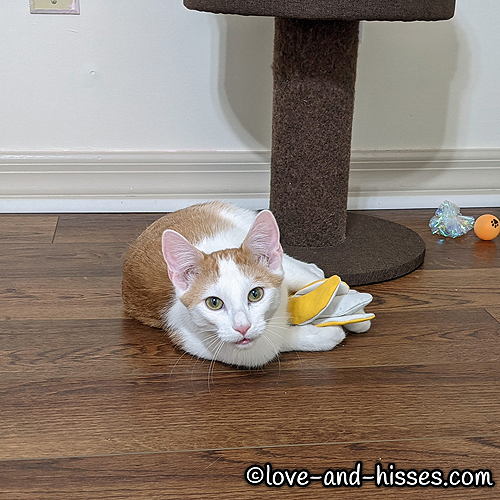 YouTube link
(I meant to post this the other day, but didn’t get around to it.) When I brought Alfie Alfredo and Christopher Chutney home from Petsmart on Wednesday, I let them out in the foster room with the Elements kittens. I made this video about 30 minutes after they’d been released into the room. Pretty calm, right? (I mean, the hissing and growling did start up eventually, but at this point they’re mostly over that.) 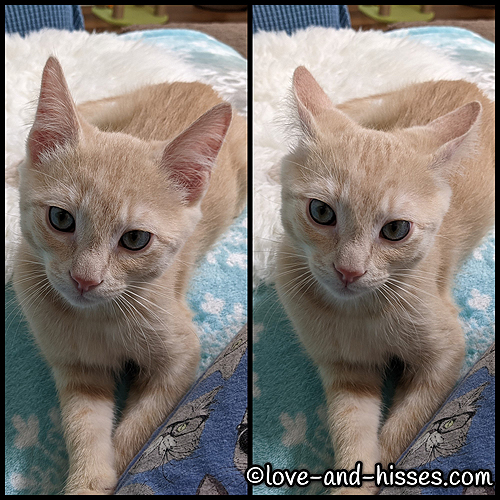 I don’t know what I did to get the Ears of Annoyance from Sammy, but I’m glad I captured both versions of him. 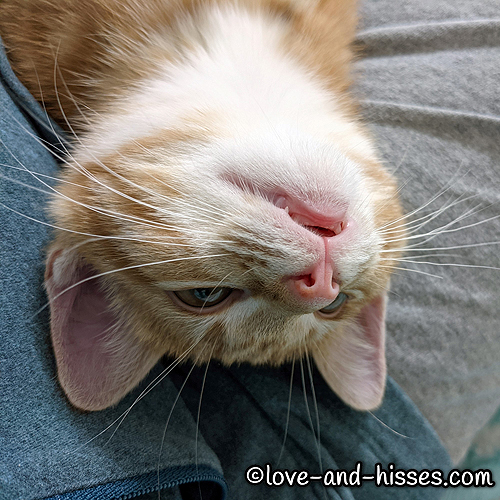