Steps or a railing on that deck!! I’m surprised it passed home inspection without something there!! Be careful please!

Decks can be questionable. Even a single rail railing on my deck didn’t pass inspection, but my inspector, knowing it was just me in the house and no children, asked if I wanted it written up, and I said no. There were more important things I wanted the seller to fix. 😀

Oh, I’m very careful – I actually rarely go to that end of the deck, and when I do I pay attention to where I’m going. And we let a lot of things slide when we were buying this house because it’s such a hot seller’s market, and this was the only house we looked at that was actually in livable condition – that is, things need to be done, but they can be done gradually while we’re living here. (Please note: I have not yet painted a single room. I’m hoping to start small, with the downstairs bathroom, in January.)

It’s tiiiimmmmmeeeeeeee! Tis the season – which does not begin until the Love N Hisses holiday card notice goes up!!! Whoo hoooo! PS: Kudos, Robyn, you’re ahead of schedule this year, no?!? whooo hoooooo!

I did start sending out holiday cards early this year! I’ve always started taking names the day after Thanksgiving, but with the way mail has been this year I thought I’d give it a few extra days (and actually, I would have started even earlier except that I ordered them later than I should have, so I didn’t actually have them in hand ’til last Saturday!) 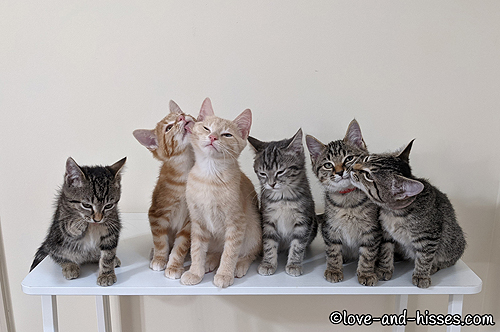 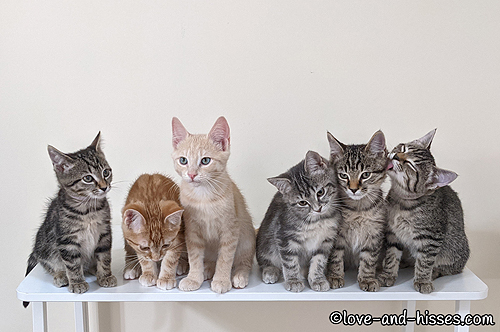 It might be their favorite part of Churu time!

So on Wednesday I went to Petsmart and brought Alfie and Christopher home with me. They’ve been there for almost two months, so it was definitely time for a break. They’ll be here for two weeks or so. 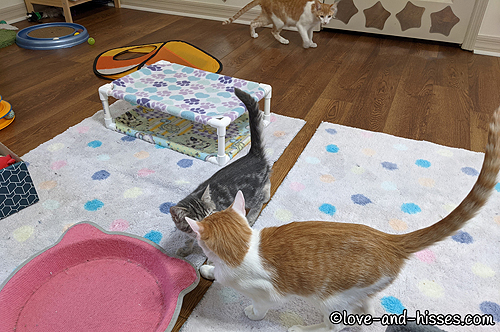 Carli stomped right on over to Christopher to see what the what was. 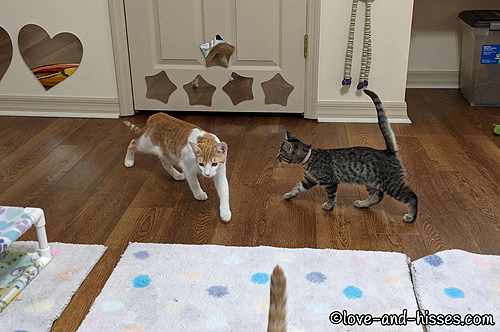 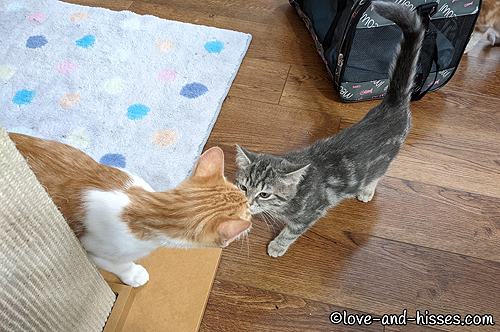 Carli was all “Oooh, a new kitty friend!” 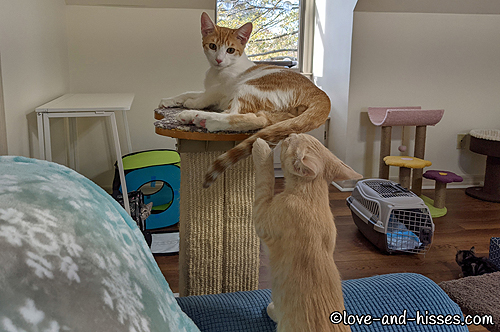 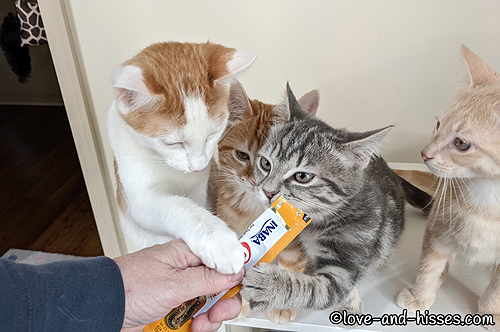 Christopher was happy to take part in Churu time. 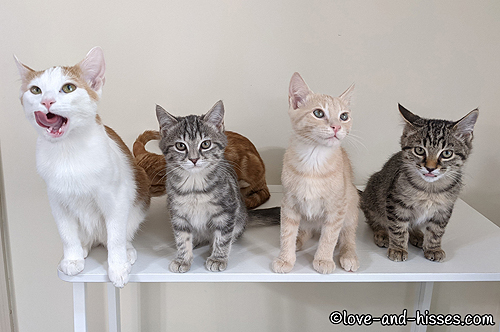 Carli’s FACE. She was all “I didn’t know we was gonna have to share our CHURU.” 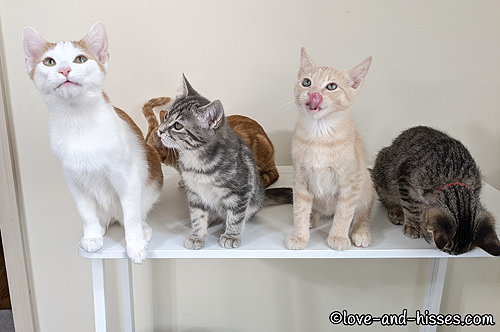 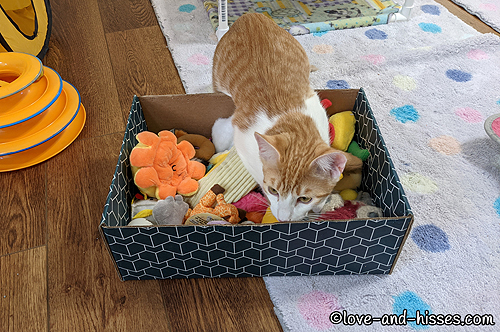 Alfie preferred to check out the box o’ toys.

So for the first few hours it was all curiosity on everyone’s part – the little kittens sniffed the big kittens, and vice versa. I thought “Oh, how sweet, they’re gonna be BEST FRIENDS!”

After the first few hours, though, the hissing and growling began. It kept on through the evening, and when I checked on them before I went to sleep Christopher and Alfie had claimed the cubby on the front of the house (with the built-in window seat and the window bed) as theirs, and the little kittens had claimed the cubby on the back of the house (with the awesome cat tree) as theirs. The hissing and growling continued through yesterday (that’s one way to celebrate Thanksgiving, I suppose), though there was less of it. I’m sure it’ll take a few days for them all to acclimate – at this point everyone’s comfortable enough to eat, use the litter box, and play, and there are occasional interactions between the big kittens and the little ones. No one is picking on anyone, and Carli is determined to be buddies with Alfie and Christopher, so we’ll see how it all shakes out.

When we went into the room in the evening Wednesday night, Uncle Charlie joined us. Alfie had an opinion about that. 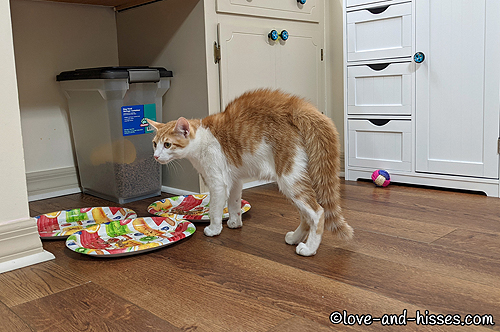 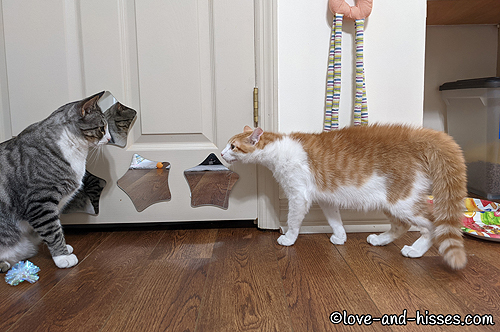 Charlie mostly just looked at Alfie and rolled his eyes. He is SUCH a good uncle! 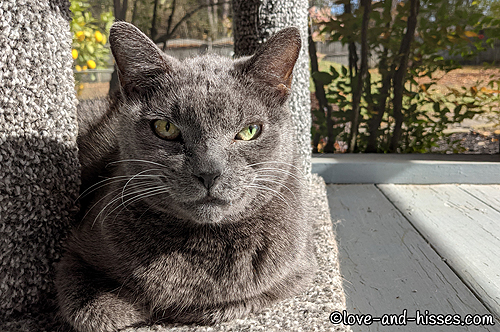 It’s a Jake in the sun. Jake always looks so AMUSED. 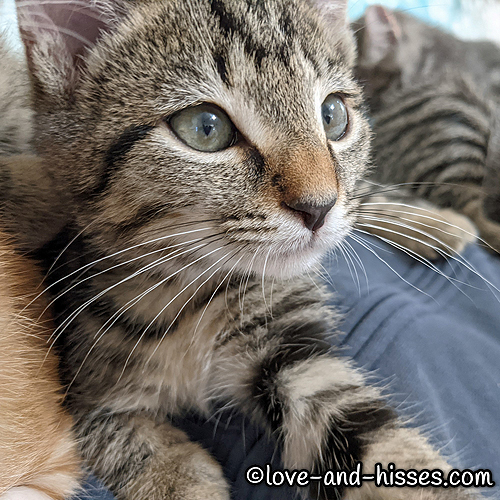 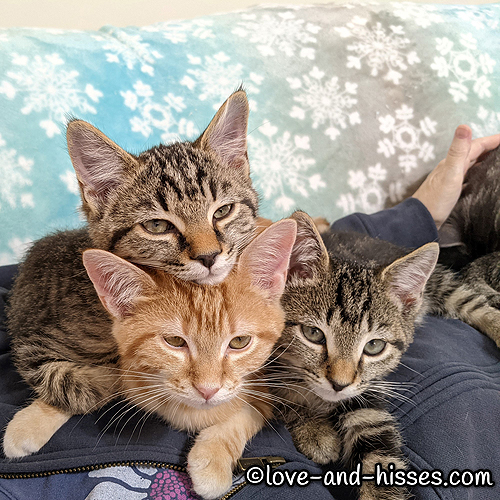 Barry, Ozzy and Nikki. Barry loves to do this head-stacking maneuver. I guess his siblings are comfy chin rests. 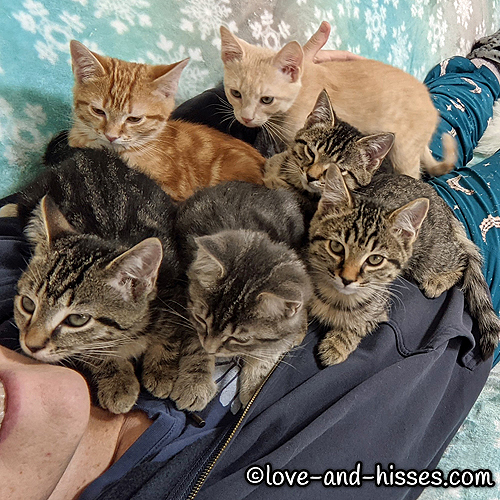 Wherein I am a very comfy kitten bed.

YouTube link
3 minutes of kittens playing. Nikki’s got that butt-wiggle down to a science! 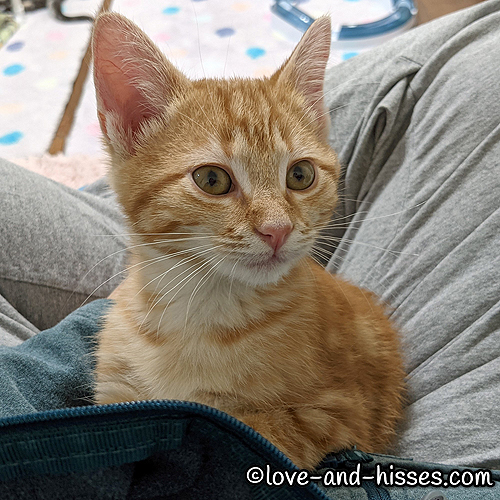 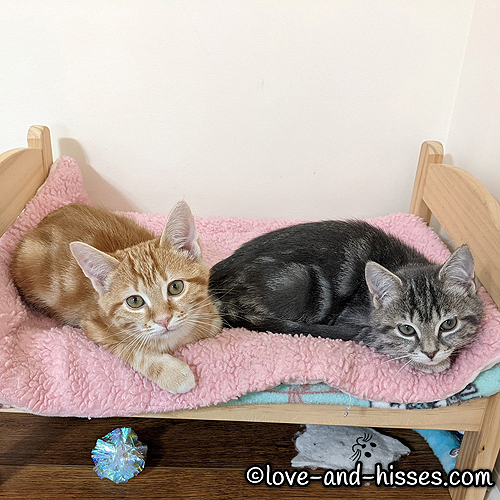 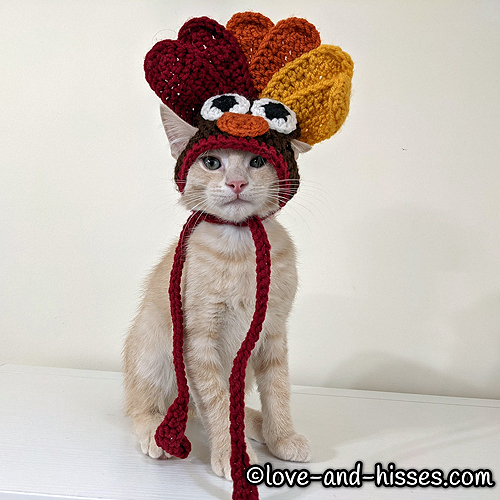 YouTube link
Kittens are wearing their crazypants! Must be all that turkey… 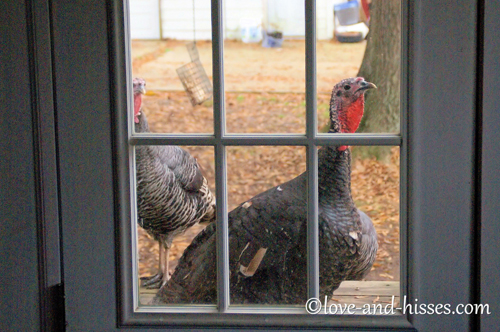 Throwback Thursday: Thanksgiving 2009.
“Are you sure they said 11:00? I don’t see anything in there but a roasting pan. Are we too early?”
(That picture was taken back in 2009, the first and last year we ever raised turkeys. I always say that God created chickens and then he said “Huh. I wonder if I could make something dumber than a chicken” and he did.)

YouTube link
Nikki (classic brown tabby with the swirly markings on her side) and Ruthy (striped/ticked brown tabby) certainly know how to make their own fun.

YouTube link
Uncle Charlie’s giving baths. Isn’t he just the BEST Uncle? I swear they have stars in their eyes when they look at him.

YouTube link
It’s dinner time and the kittens are hungryyy.

YouTube link
Nikki Nickel is one feisty little girl. Check out those ears! 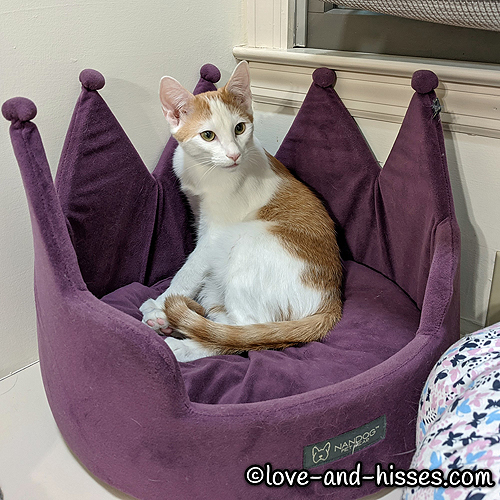 Good night innernets. (Christopher Chutney (pictured) and Alfie Alfredo are back here on break for a couple of weeks.)