I can just imagine the maintenance man’s delight on discovering… hey, there are kittens in here! 🙂 I’m surprised Ozzy wasn’t all over the new person, considering. Maybe next time maintenance man will get a lapkitten!

Oh, can you imagine opening a door to a room full of of kittens?!?!!

I would love to happen upon a room full of kittens! Maybe next time, he could take his boots off.

Ha! I imagine his surprise walking into a kitten den!!

That guy actually didn’t return with the crew after Monday (I guess his part of the job was done), so there were no more visits to the kittens.

This makes me think of when we had Crooked Acres on the market, and the time came for an open house. At that point we were fostering Nola and the Cajuns. This was early to mid summer, and although we had places we could put them during the open house, I didn’t want to move them. So we left them in the foster room and put a note on the door that said “We are fostering a mother cat and kittens for a local rescue. You are welcome to come in and look around and even pet the kittens if you’d like, just please don’t let them out of the room.” Naturally, we were a little nervous about letting strangers have free access to the kitten room, but we had cameras in the room and the realtor promised he’d keep an eye on things, so we figured it’d be okay.

I looked back on the camera at the end of the day. We’d had something like 30 people come through the house and EXCEPT for two women who squealed when they saw the kittens and went in and petted them and took pictures, every single other person just opened the door, peeked in to see what the room looked like, and then shut the door. I mean, can you IMAGINE? I told Fred “If we ever looked at a house and there was a room of kittens, they’d have had to kick us out at the end of the day!”

Just out of interest, is Uncle Charlie the only permanent resident that visits with the kittens?

Yeah, Uncle Charlie is really the only one who visits with the kittens, though they’re all allowed to if they want to (they just don’t want to!) Very rarely, Archie will ask to go into the room, so we let him in, he gets immediately overwhelmed by the number of kittens, growls at them and then leaves. The rest of the permanent residents are 100% OVER foster kittens and have zero interest in them.

Oh! I did not know the Magnificent One ever came inside. I am glad you don’t have to hover over a deluxe, heated outdoor cat house in the dead of Winter to admire him.

Oh, Khal comes inside regularly. Especially at TV time when he jumps up next to me, gets mad when I move his tail away from my face so I can see the TV, and then floomps off in a huff.

Sweet little faces…are the tabbies hard to tell apart? I noticed some of them are wearing snazzy collars.

Yeah, the three brown tabbies are wearing collars (Nikki’s in purple, Ruthy in pink and Barry in red). I still sometimes have a hard time telling Barry and Ruthy apart if I can only see their faces, and they’ve been here over a month!

Another visit from Uncle Charlie. 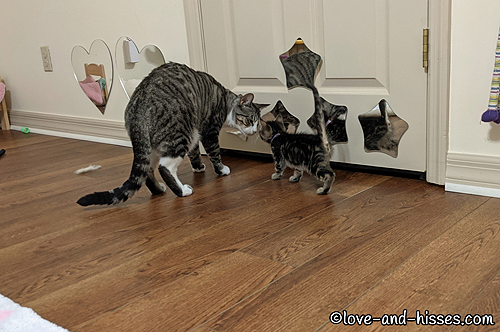 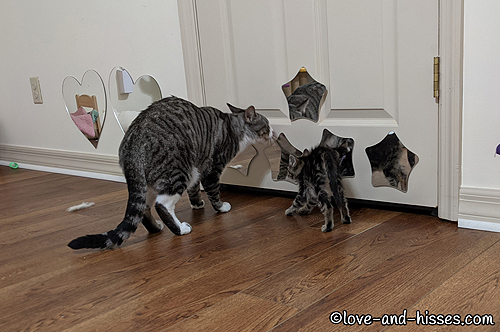 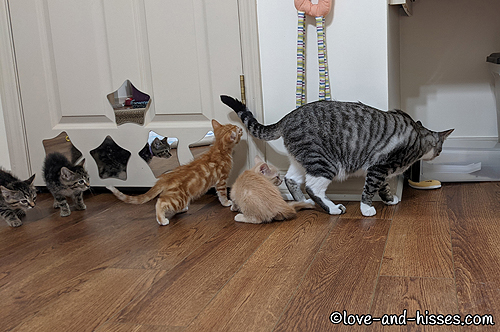 A whole lotta sniffin’ going on. 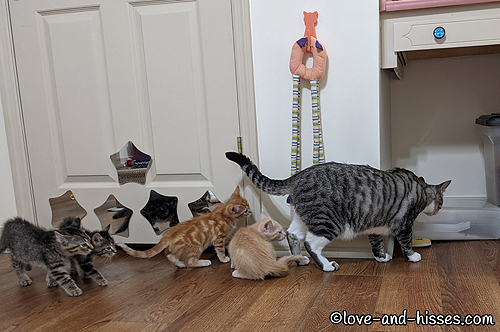 Note that Ozzy and Sammy are all up in his business and Nikki and Barry are still wearing their fancy Floof Suits. 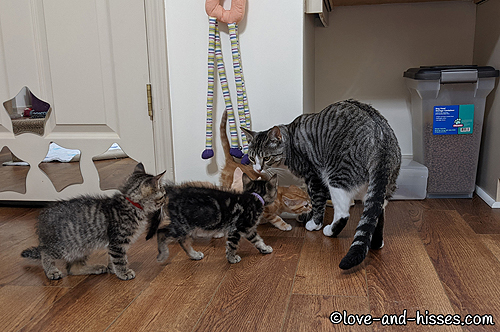 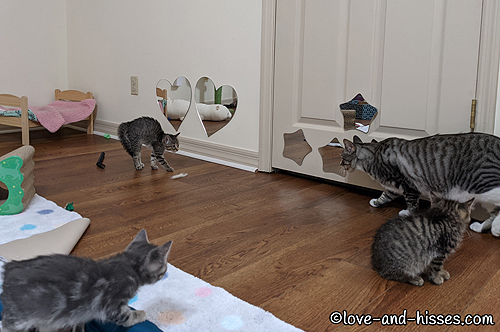 Ruthy finally caught sight of Uncle Charlie and was all “NOPE. NO THANK YOU.” 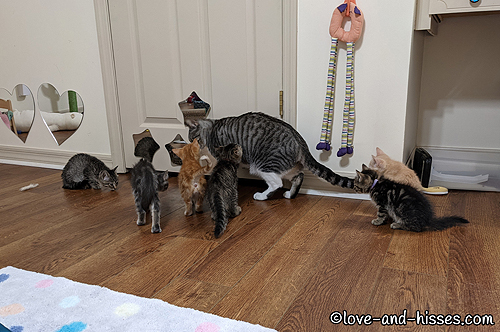 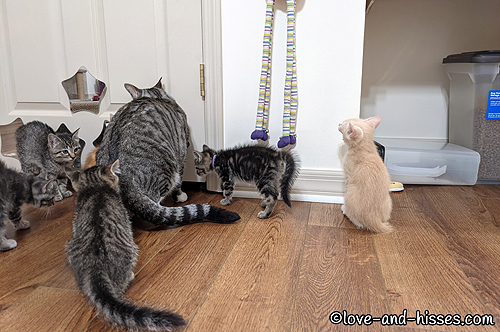 I’m going to declare Nikki the winner of the Floof Suit contest. 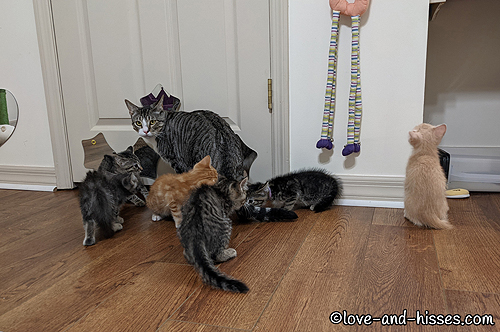 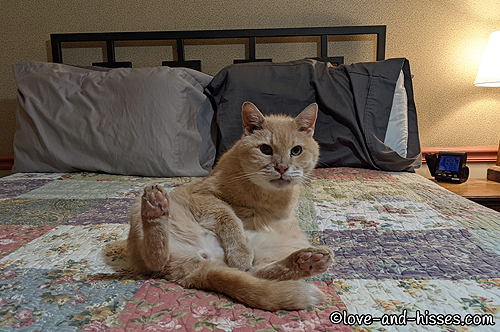 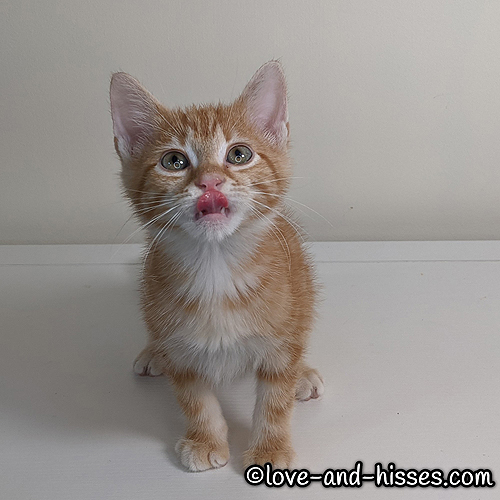 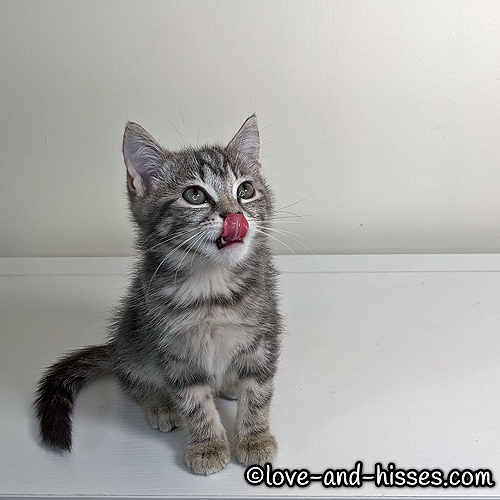 YouTube link
Wheeere’s Ruthy? Not under the blanket, nope, no Ruthy here! 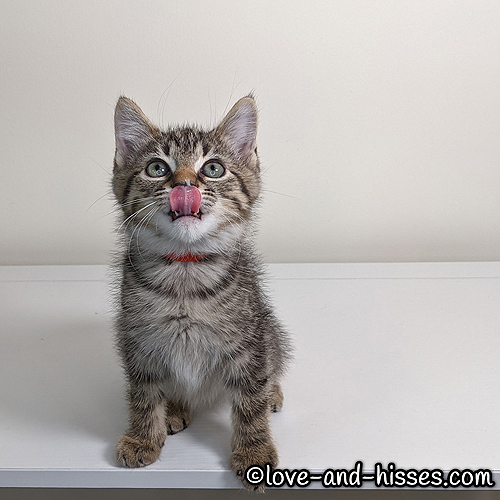 Barry gets his thlurrrp on… it is Thlurrrpsday, after all!

YouTube link
Throw Back Thursday: In April of this year we were fostering Canasta and her kittens (the Cardsharks). One evening I was feeding them their canned food, and Fred and Uncle Charlie were waiting for them to finish eating so they could play with them. Fred – FOR SOME UNKNOWN REASON – decided to start whistling, and a moment later I closed a drawer. This started a Category Six Kittenado that scattered to all the corners of the room. Fortunately, I was able to stitch together video from three Nest cameras to show the Kittenado is all its glory (my particular favorite is Uncle Charlie’s reaction to the scattering kittens. My other favorite is Canasta, who was on the counter in her pink onesie, and reacted not at all to any of the nonsense.) Fred was of the opinion that I’d caused it to happen by closing the drawer, thus his “That was you!” in response to my turning and looking at him. 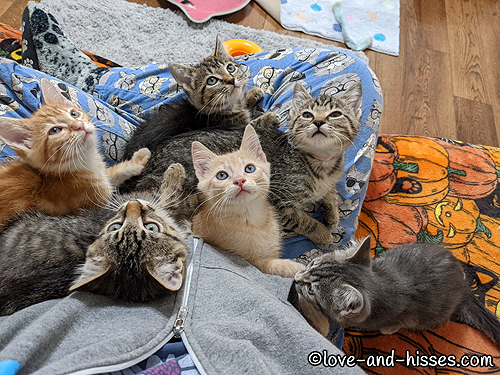 That is a lap full o’ warm, purring kittens (Carli, over there on the side, was warm and purring too, but opted to wait ’til there was more room in my lap.) 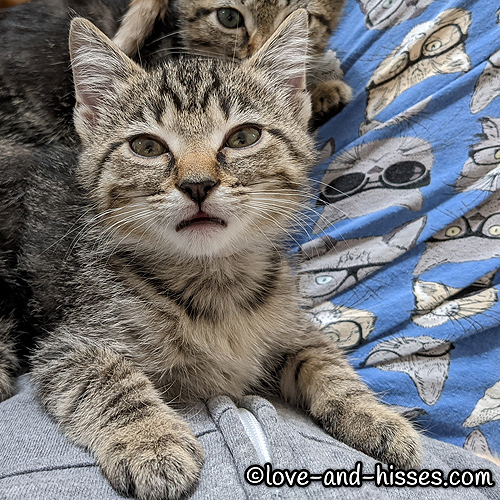