Do the kittens take long naps, or lots of short naps? I can’t remember what our kitty did for sleeping when he was little (other than that he really wanted to play at 3 am!)

They seem to sleep for several hours at night (I know they settle down by 10 and then sleep until 2 or 3) and then take lots of shorter naps during the day.

Surely it’s just the angle or something but Jake’s legs look 4 inches long with a 12 in tall body! Very very funny, since other pics he looks proportional.

Oh Jake! Love that cat! That picture is so funny, must be the angle but his wee little head looks too small for that body, lol. And I thought Elwood was the chunker, perhaps Jake gained in memory of that dear boy. Loved them both, but Jake has always had my heart.

I’d love to tell you that it’s the angle, but no – he’s just as goofy as he looks in that picture. He 100% has a tiny pinhead, a big body, and short little legs, he always has. He doesn’t move like the other cats, he kind of slinks around like a fuzzy eel, possibly because of those short legs. He’s actually one of our smaller cats (Alice is just a bit smaller), but he could probably lose a little weight (the previous vet declared him overweight; our current vet gave him an A+. So I guess it’s just a matter of opinion!) Elwood was definitely the larger of the two, though. 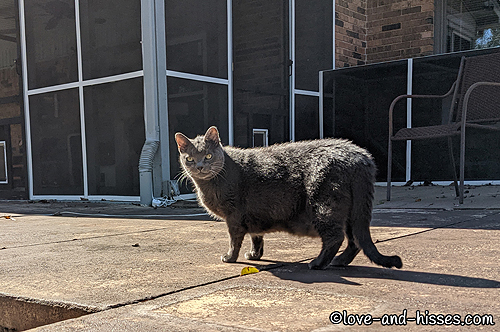 How are the kittens liking the cactus climbing toy (seen briefly in today’s “Post-Breakfast Zoomies” video)? I got one for my normally playful girl, but she totally ignored it, so I donated it to my local cat cafe a few months ago. This week I got a note of thanks with pictures: the cats loved and played with it so much that they all but decapitated the top part!

They love climbing on it, but it’s funny you mention the one you donated all but being decapitated – this morning I noticed that the top is starting to come off, and I’ll need to utilize my (terrible) sewing skills to reattach it on one side!

Another visit from Uncle Charlie! These are getting to be daily events now. 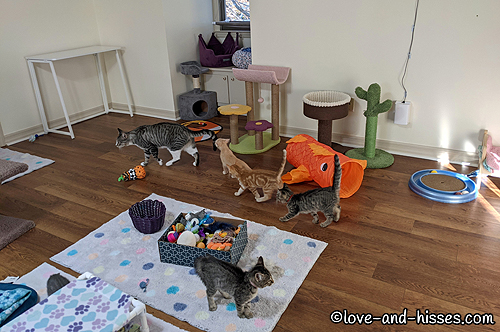 I love how they follow him around with their tails in the air. 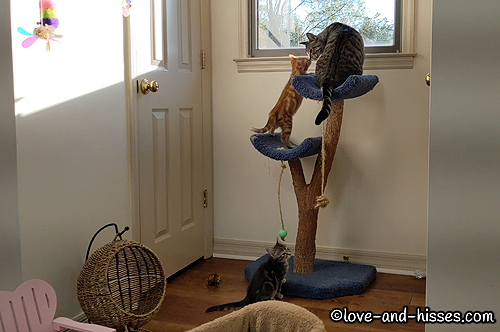 He decided to check out the cat tree, and Ozzy followed to get a good sniff. 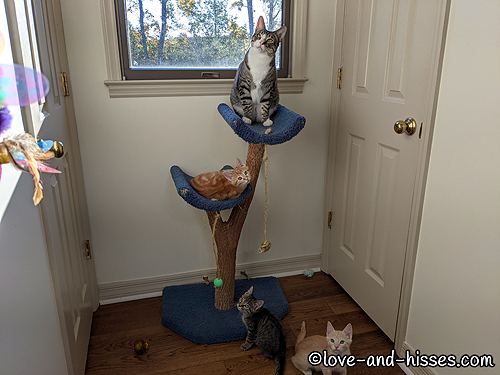 Charlie sat and gave the feather teasers the Eyes of Lurve. 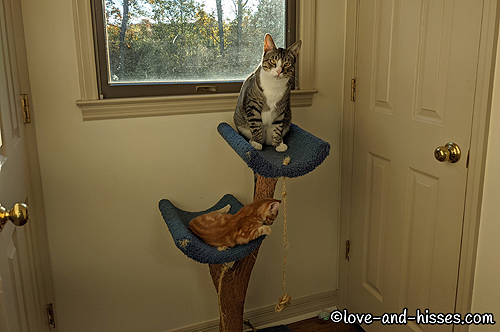 Then he sat and gave me the Eyes of What You Doin’ Lady. 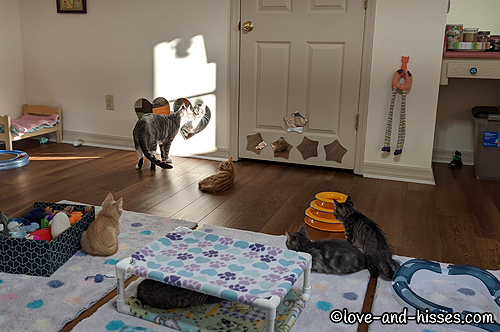 He checked out that gorgeous boy in the mirror. 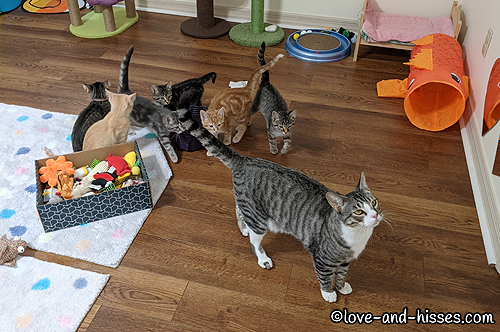 Then he looked at the door. 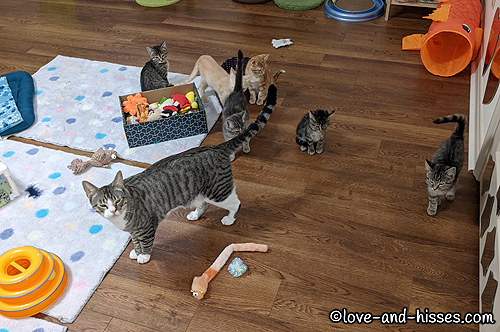 And at me, while the kittens milled about in the background. 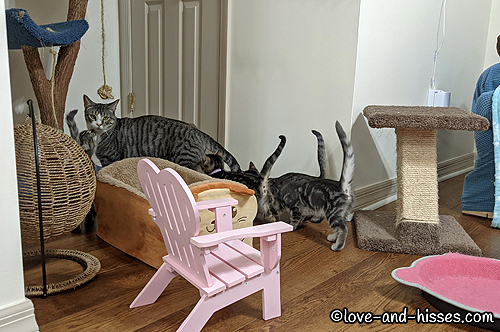 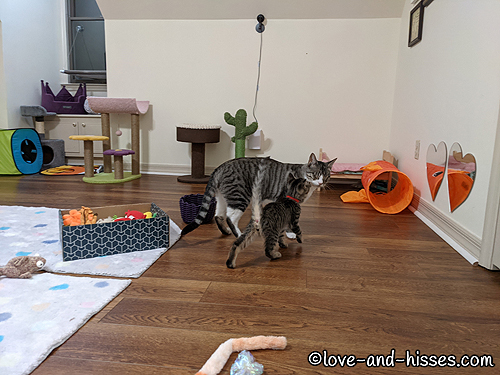 Barry ran over for a quick sniff. 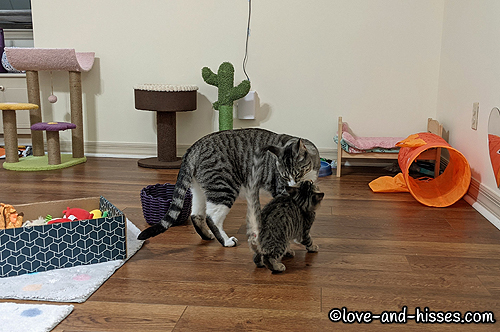 And got one in return. 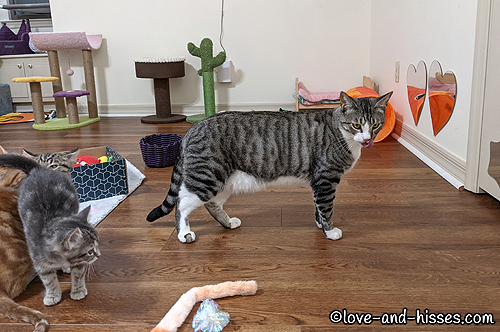 Uncle Charlie took one more look around before he headed out the door. 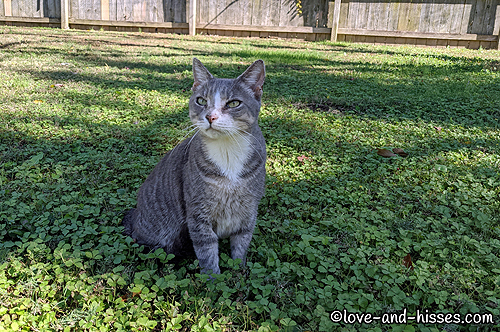 Archie in the back yard. He’s such a good-looking boy.

I’ve had a few people surprised that Archie is actually friendly to strangers. Archie isn’t scared of strangers at all. He’s full of love, loves to be petted, will rub against you all day long, but when he’s done he’s all “I SAID GOOD DAY SIR” and off he goes. If you try to pet him after that? He’ll hiss as he stomps off. He’s got his limits and he’s not hesitant to tell you about them. He also LOSES HIS MIND if you try to restrain him. I’m sure I’ve told the story of how he went to his yearly checkup last fall and was full of love, rubbing against the vet tech and the vet, until the vet tech held him so the vet could look into his mouth, and Archie LOST. HIS. MIND. He’s really scary sounding when he hisses and growls and yowls, but he is 100% all talk – he’s never scratched or bitten anyone, he just sounds really scary. The vet added a note to his chart that he “might need sedation” for his next checkup. For his checkup this year, we got Gabapentin from the vet and gave it to him beforehand, and it worked amazingly well. Highly recommended! 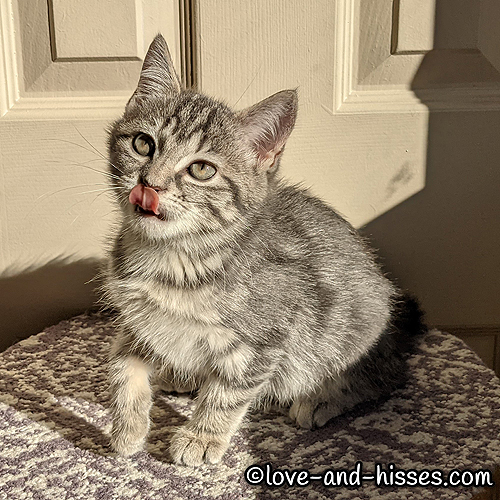 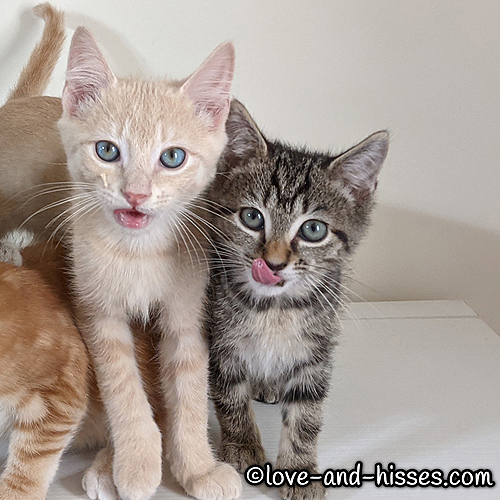 Did Sammy and Nikki mention that it’s Thlurrrpsday? 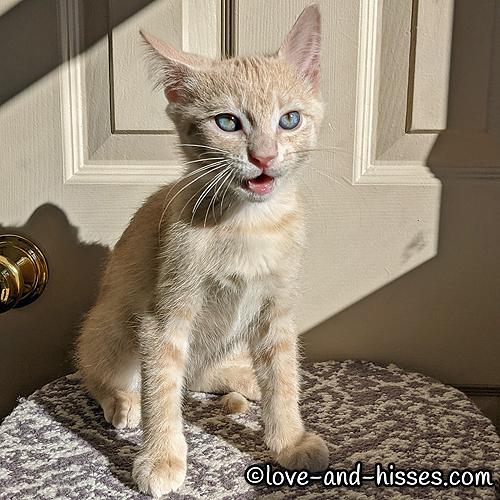 Getting a bit of the ol’ teenage attitude from Sammy. 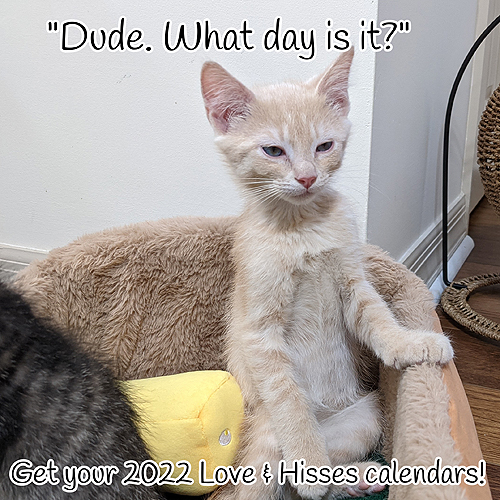 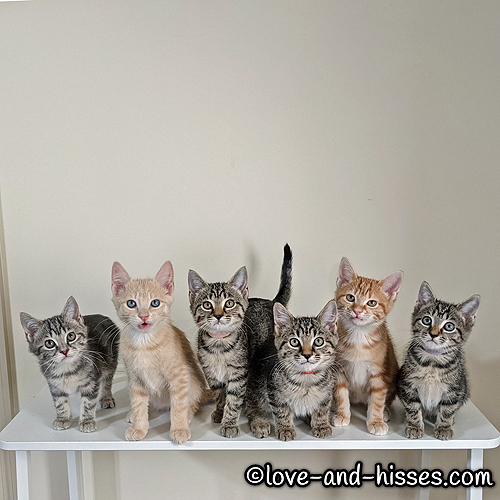 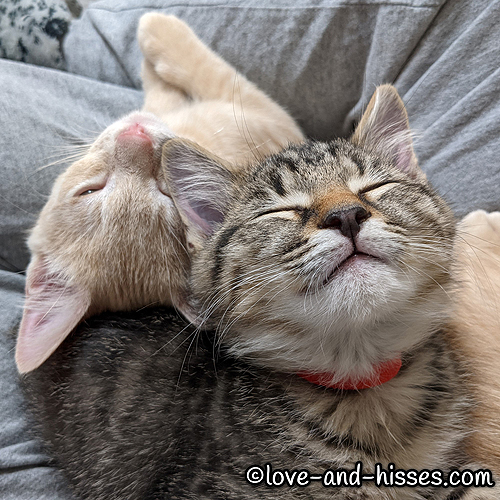