Yet another visit from Uncle Charlie 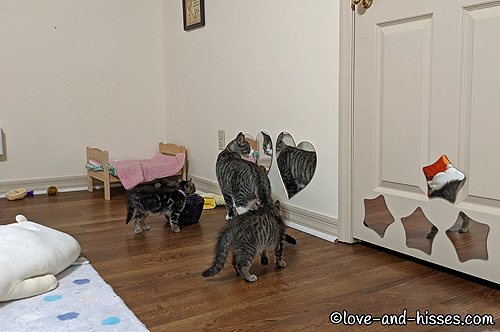 I love how Charlie is ignoring them, and Nikki (left) and Barry are all “LOOK AT US WHILE WE’RE FLOOFING AT YOU!” 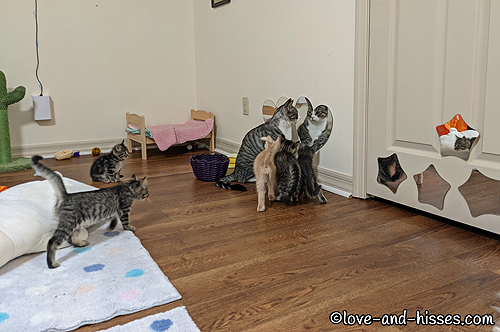 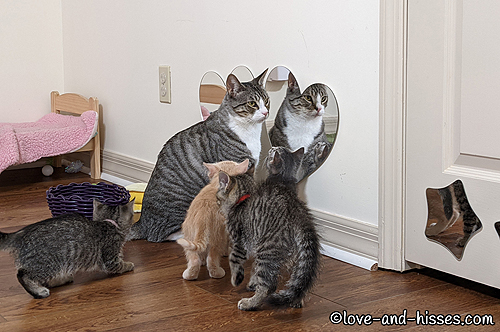 Charlie’s like “Sigh. Why do I keep coming in here?” 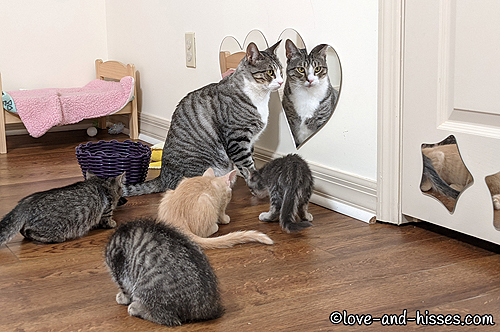 “What was I thinking?” 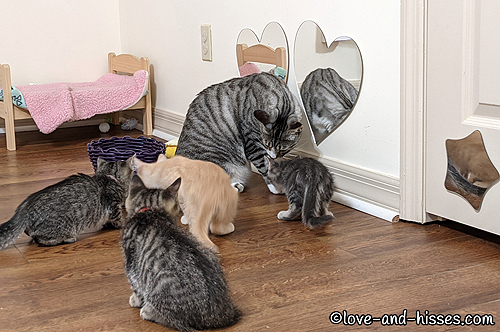 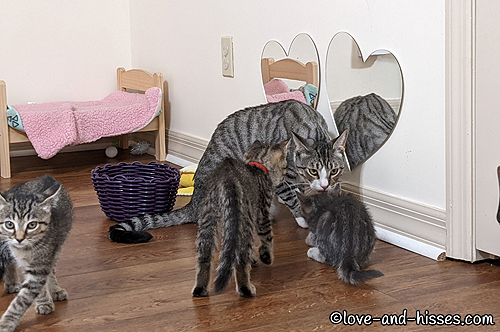 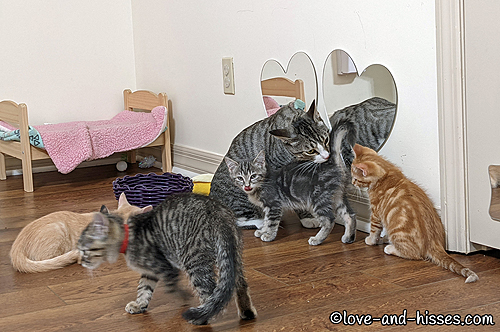 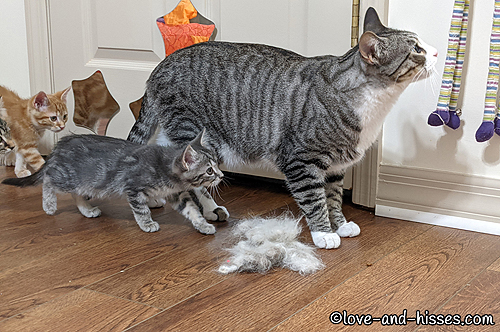 “You and me against the world, Unca Charlie!” 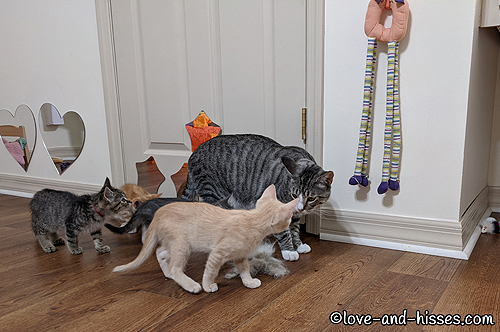 Sammy’s all “You seem A-OK, Unca Charlie. But I’ma floof at you next time, probably.”
“No problem, kid.”

(For the record, when Charlie visits the kitten room, it’s at his request (a wail outside the door), and he generally only stays for 2 or 3 minutes. As soon as he asks to go out, we let him out. The kittens have seen him for a limited amount of time, so really he’s still a stranger to them, thus the floof suits.)

Speaking of Uncle Charlie, he went to the vet yesterday for his yearly exam and shots (he was due a few months ago, but things have been a little crazy what with the moving and all). He now weighs 15 pounds, which makes him our biggest cat (followed by Khal at 13 pounds. Everyone else is around 11 or 12 pounds.)

Anyway, his vet visit went fine, and the vet said that Charlie has an “unusual” look to him, like he’s part wild cat, which was interesting to hear. 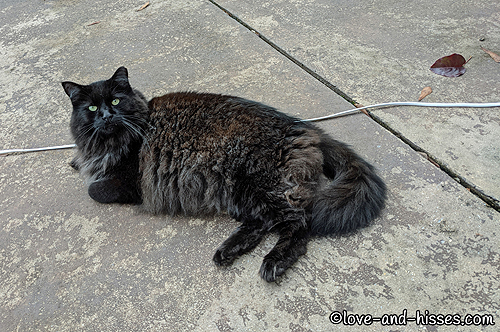 Khal’s all “Did you just tell the entire internet my weight? How very dare you, Madam.” 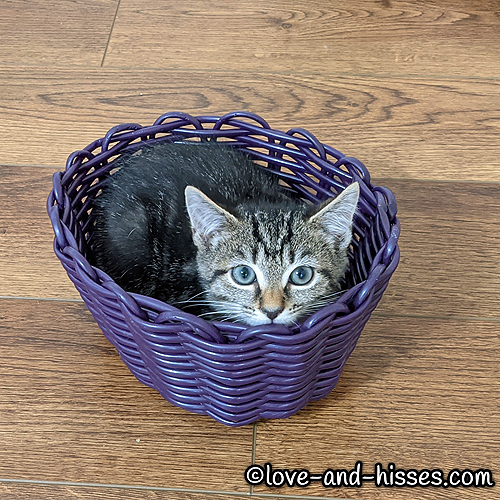 It’s a Tiny Nikki in a Tiny Basket. 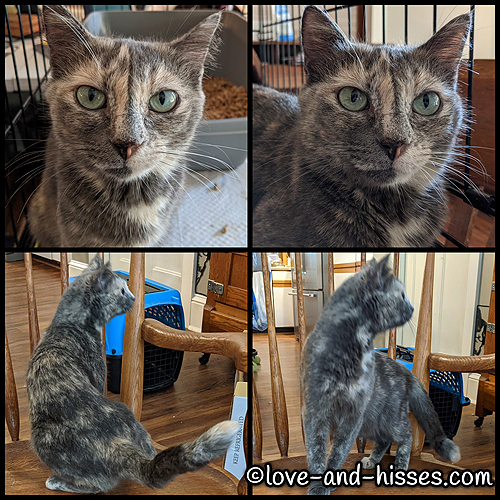 I stopped by Michelle’s house yesterday and while I was there I saw Maddy Magnesium (Mama to the Elements kittens; she went to Michelle’s house about 3 weeks ago because she was ready to stop with the mothering thing.) She’s doing great! Her milk is all dried up, and she was just chilling. I wish the pictures on the bottom had come out better: she caught sight of herself in a mirror and was enthralled (confused?) She let me pet her a bit, and then wandered off to do whatever was on her “to do” list.

YouTube link
It’s easy to think of (permanent resident) Charlie as a “grown up,” but he’s really only a year and a half old and still has a lot of kitten left in him. 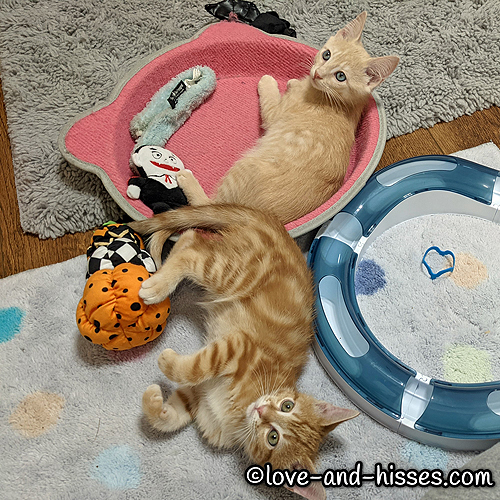 YouTube link
These kittens have made it their goal in life to FLATTEN THAT TENT. 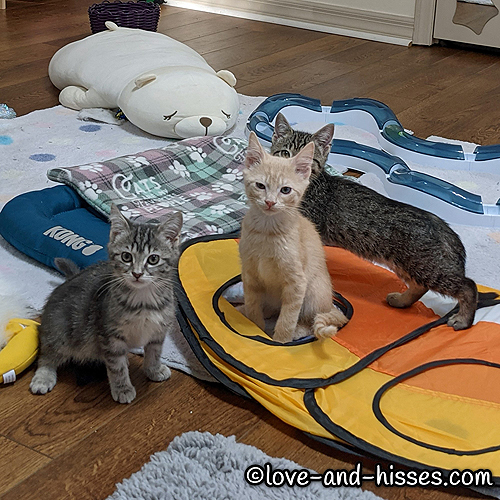 The looks I got when I said “If y’all spent as much time on schoolwork as you spend flattening that tent, you’d have no problem getting into college!” 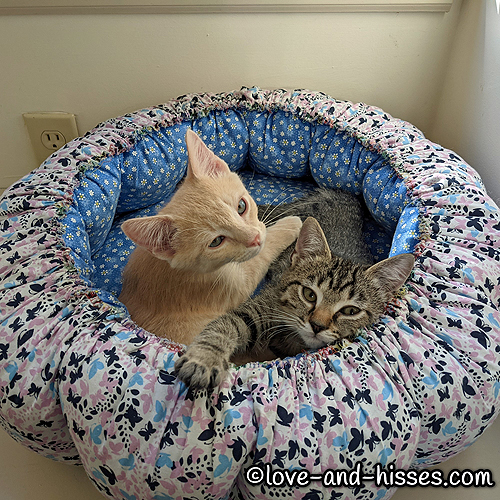