Nola came to us on March 22, 2017. She’d shown up on someone’s doorstep earlier in the year, and when they realized she was pregnant they contacted Forgotten Felines. As it happened, I was going on a long weekend’s vacation to New Orleans with my sister, so a temporary space was found for her until I could get back and take possession. I worried that she’d have her kittens before I could get her, but as it turned out not only did she not have them, she went on to wait nearly another two weeks before she finally had them.

She was named Nola after the abbreviation for New Orleans, Louisiana, and I planned to give her kittens some sort of Cajun naming theme.

Nola gave birth in the morning hours of April 3. By the time I walked into the room at nearly 8:00, she’d had two kittens and went on to have two more – one orange and white tuxie boy, and three brown tabby and white girls. After some dithering, I named the kittens Andouille (the orange and white tabby boy), Beignet, Praline, and Roux. You can read about Nola beginning here. There are links at the top and bottom of each entry; click on the one on the right to take you to the next entry. Read about her kittens beginning here.

You can see all the pictures taken of Nola and her kittens here at Flickr, or scroll through them below.

Andouille and Beignet were adopted together and have been renamed Andre and Bella. They have their own Facebook page here, which they occasionally share with their big sister Jessica.

Praline and Roux were adopted together and went home on 7/17. 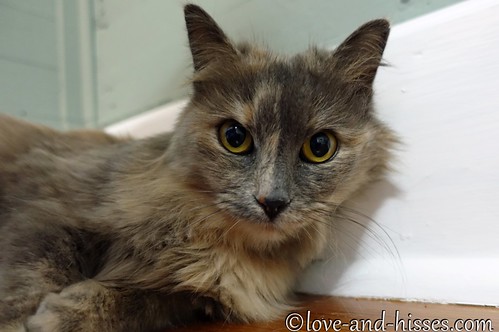