I can’t remember–have you ever had any polydactyl cats? We have had several over the years and just lost our last one in December. 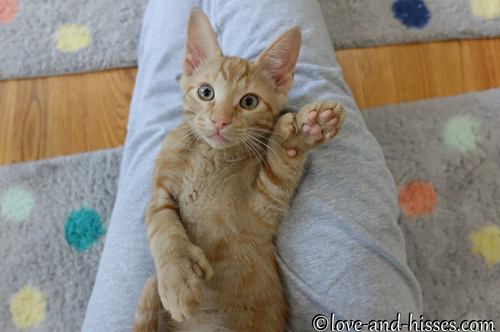 Brian Boitano from the Olympians (Kristi’s son, 2018) – now Harry of Harry and Harley – had about 73 extra toes, and he lovingly posed with those toes front and center at every given opportunity.

We also had an adult polydactyl – Thomas – in 2014 who was polydactyl. Also, Terry of the True Blood 6 wasn’t polydactyl – he had the normal number of toes – but they were separated oddly, so at first glance it always looked like he had extra toes. It’s entirely possible I’m forgetting someone (and if so, y’all feel free to let me know who I’ve forgotten), but those are the only polydactyls we’ve had that come to mind.

In the 3 seconds between reading the results and going to type “Peterbald cat” in Google Images to find out what it meant, I somehow converted it to “Piebald cat” and got tons of adorable pix of kittens who look like the Cardsharks. I had no idea this was a variation of tuxies. And then the idea that all the Cardsharks are wearing tuxedos made me think of some in The Rat Pack: Bogie, Sinatra, Deano, Lauren, Judy, and Ava.

A. I love those names, and B. I remember running across the description “Piebald” at some point in the past and it always makes me think of an old horse – I don’t know why, all I can imagine is that an old piebald horse was featured in something I read as a kid and it’s stuck with me.

Y’all can read more about piebald cats here and Peterbalds here (and now I feel like Canasta must have some Peterbald in her genetic makeup).

Now that you have that info, what do you do with it? I’m asking rhetorically because I wanted to do that for my Khal look-alike, but don’t know what to make of that mix. Deep thoughts…

I can’t speak for anyone else, but I’m going to save the graphic on my phone so that I can respond to the “Is he Maine Coon/Norwegian Forest Cat/Siberian/Something else” questions with the graphic (I get that question a LOT).

Mostly, it’s just interesting to have an answer.

Look at them snoozing away… Again I wonder, as I do with all new little litters, if they smell more like flowers, or fresh Chex snack mix? Maybe banana bread baking…

The 2018 headline entry makes me crack up “Kristi has officially made me wait the longest“. BAHAHA!

That made me laugh too!

Is this group the most wiggly? They seem to move around a lot during breast feeding. Also, how many times a day do the babies need to breastfeed?

I’d say they’re about average on the wiggly scale – all kittens are pretty wiggly at this age! As far as how often they need to nurse – I honestly don’t know. It seems like they’re always nursing, but I suspect they just nurse whenever the milk bar happens to be there and they’re hungry.

Does Canasta have an extra toe on her front right or just really big paws?

She’s got big paws with lonnnng toes (but no extra toes).

When do you expect the first crate escape and who do you predict will be the trail blazer?

I expect the first crate escape to happen by… oh, let’s say mid-week next week. They’re still wobbly right now and can’t quite figure out the concept of lifting their legs to get over the side of the crate (and also, they have short stubby little legs), so it could be even a little longer.

In previous years I have had baby blankets on top of the crate pad, which made it a bit easier for the kittens to get their legs over the side of the crate. However, with being unable to retract their claws at this age, they tend to get their claws caught in the baby blankets, and I don’t like seeing that (and the kittens don’t much like it either), so I’m sticking with just the crate pads. Which may mean that they’ll be a little later to escape the crate than previous kittens, but I think that’s okay. They’re still pretty young to be wandering the entire room.

As far as who the first escapee will be, I predict either Whist (who spends a lot of time looking over the side of the crate) or Rummy (who was the first to look over the side).

Can you believe these guys are THREE WEEKS OLD? 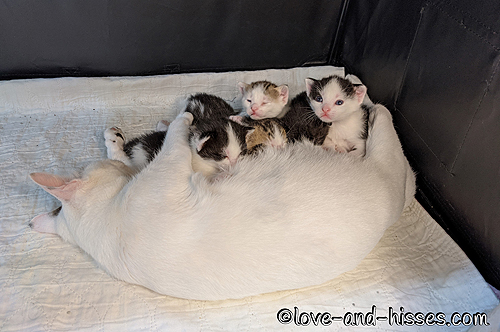 Still (mostly) fitting in at the milk bar. 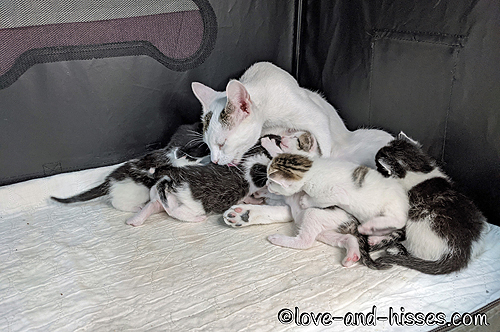 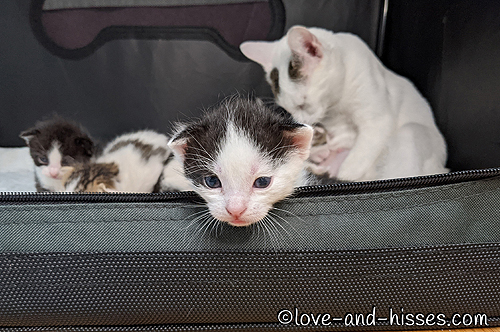 Slapjack checks out The World Beyond the Crate. 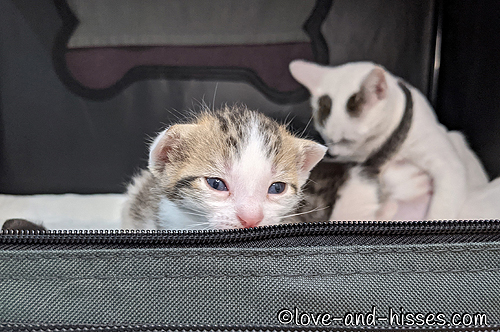 Pinochle thinks it’s a big scary world out there. 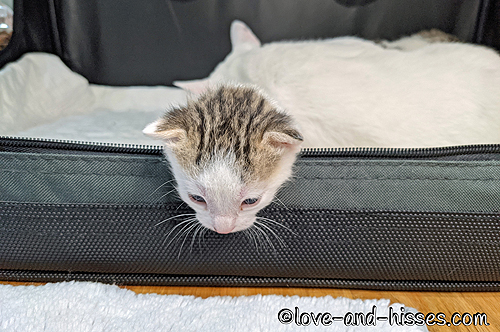 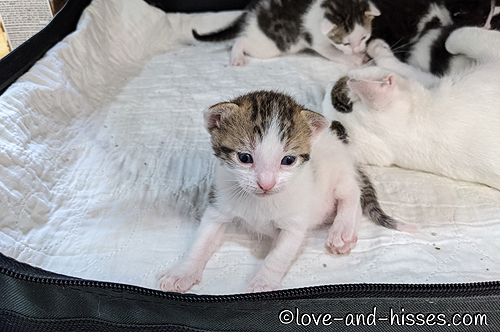 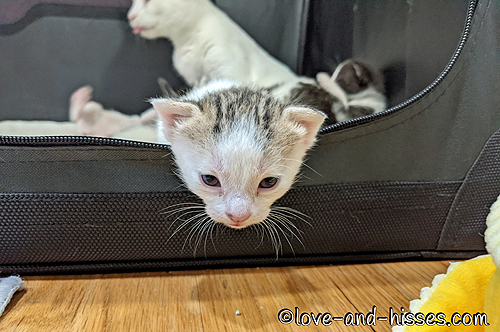 One of these days Whist is gonna figure this out. 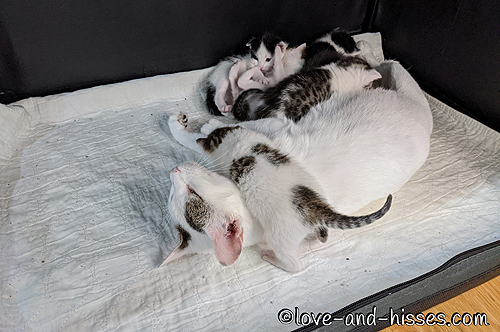 ‘Til then, she’ll be at the milk bar. 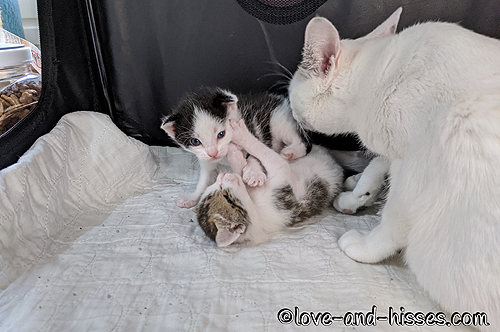 Slapjack’s all “Mooooom, stop givin’ me a bath, I’m trying to wrassle here!” 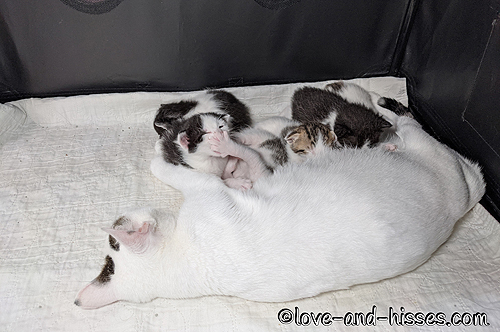 Fizzbin encourages Slapjack to talk to the paw. 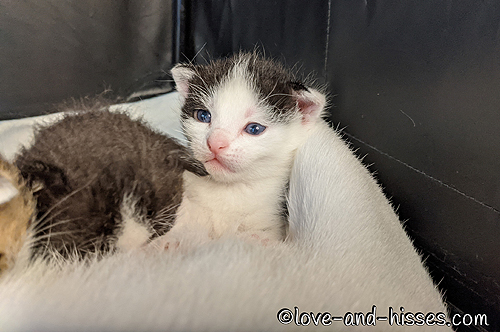 Slapjack’s got a case of bedhead going on.

I’ll get pictures and weights on these guys this morning and get them posted on social media mid-morning. I feel like Fizzbin might be close to 1 pound. I’m getting to the point where it’s hard to hold them up in one hand and take their pic with the other, they’re getting so big. 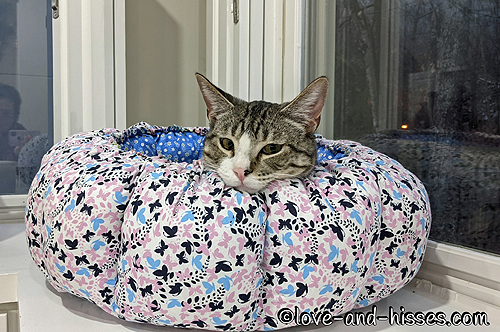 Charlie has now been banned from the foster room – not because he’s been a bad boy or anything (he’s an angel), but because Canasta’s made it clear that she doesn’t want him in there. She’s always been pretty slappy with him and he’s ignored it, but the last couple of times he’s come in in the evenings with us, she’s been truly mean to him. When she tried to bite him the other night, I decided that was the end to his visits. I’m sure with the kittens moving around the crate more and not far from figuring out how to leave the crate, the idea of having him in the room makes her feel really protective, so it’s best for them both. He actually seems okay with it, and has only asked to come into the room once since I banned him.