I just want to repeat myself: thank you all so much for your kind words about Archie. We appreciate it so very much, I can’t begin to express it.

The other permanent residents seem to be adjusting just fine. Alice has been hanging out with us a lot more than she has in a long time. I don’t know that Archie was actually picking on her, but she seemed to think he would, and so she spent a lot of time squirreled away in various spots. (We did try, at one point, giving her her own space where none of the other cats could go, but she made it very clear that she didn’t want to be in a room by herself, and we didn’t want her to feel like she was being punished.) It’s nice to see her out and about more.

Fred reports that breakfast time – he feeds the permanent residents canned food when he gets up – is a lot quieter these days. 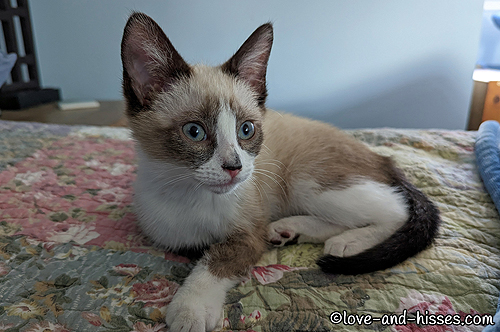 Linzer and those amazing ears. 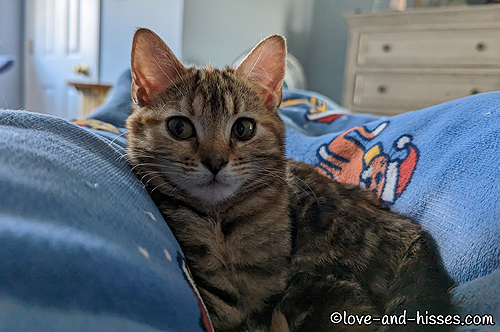 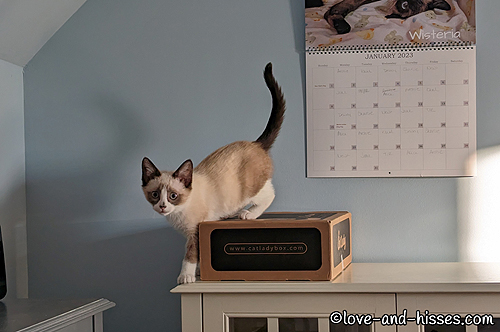 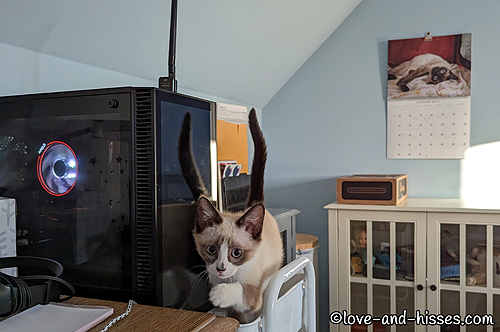 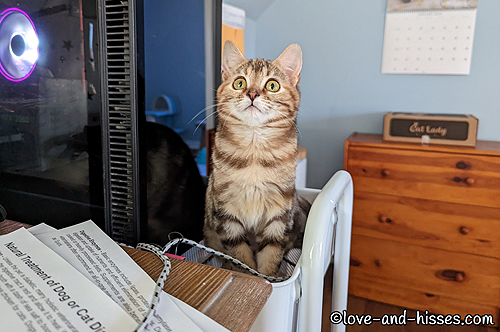 Later, along came Cinnaspin. (They love to sit in front of my computer in that little kitten-sized space.) 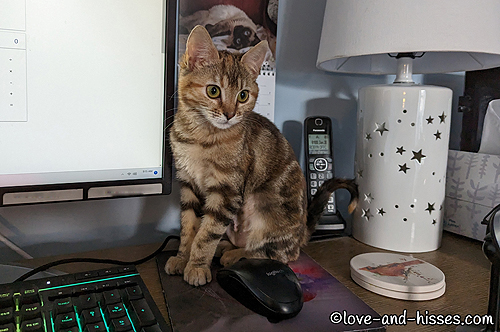 Also on my mousepad. (And it goes without saying that they love to try to stomp across my keyboard. I’ve finally given up and have ordered a clear keyboard protector. We’ll see how that goes.) 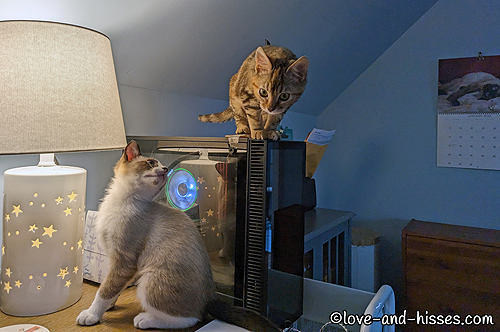 Atop my computer is a favorite spot, too. I had to tape a thick piece of cardboard across that exact spot where Cinnaspin is sitting, because that’s where the power button is. I kept finding my computer turned off and worried that something was wrong with it until Cinnaspin demonstrated her skill for me. I sure wish they’d stop putting power and control buttons on the top of flat surfaces where cats will OBVIOUSLY like to hang out. I’m looking at you, air purifier manufacturers. 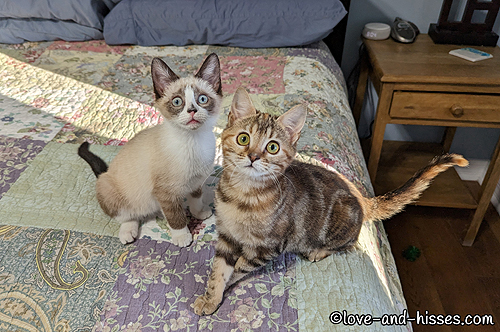 “Who, US? We’d never!” Such beautiful eyes, these girls. 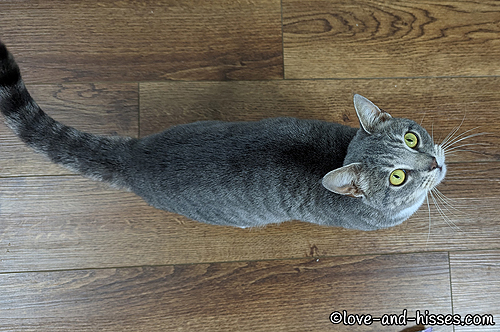 Brioche is all “Time for you to sit down, because it’s lap time, lady.” 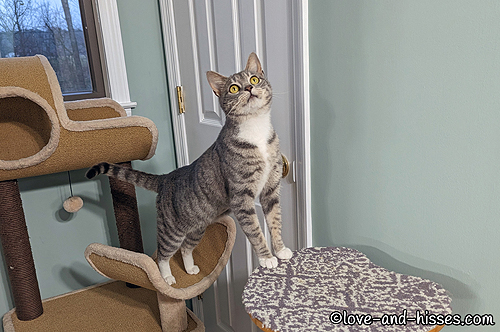 She is such a cutie. 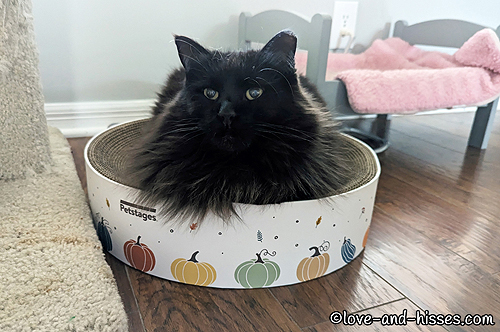 The Magnificent Khal in the scratcher bowl bein’, y’know. Magnificent! 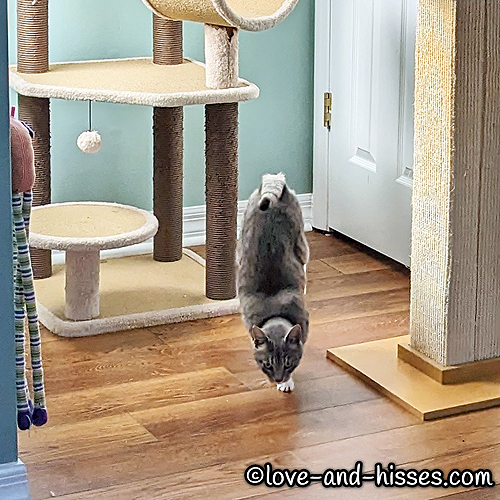 Brioche was on the cat tree when I walked into the room, and she knew it was breakfast time, so she jumped to the floor, and I happened to catch this picture, which cracks me up. She looks like she’s doing yoga, just balancing there. 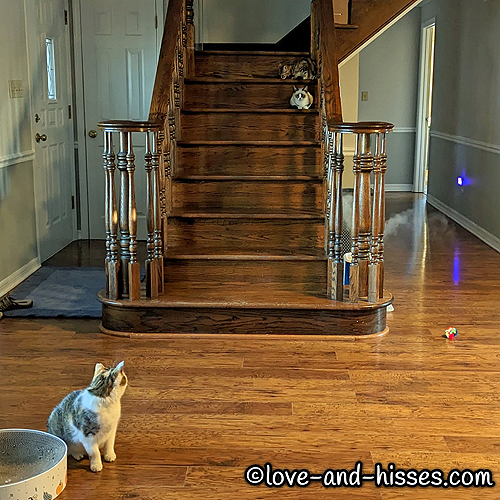 The Cookie Girls (on the stairs) get a look at Auntie Trixie, and they’re not sure what they think. (Trixie hissed quietly at them, but was pretty much unconcerned.)

YouTube link
Cinnaspin and Linzer, playing downstairs in the front room. Look at how easily Linzer climbs that cat tree! Bonus appearance by Uncle Khal. (Video ended suddenly because Fred was on a work call and it probably wasn’t top secret, but it certainly was boring.) 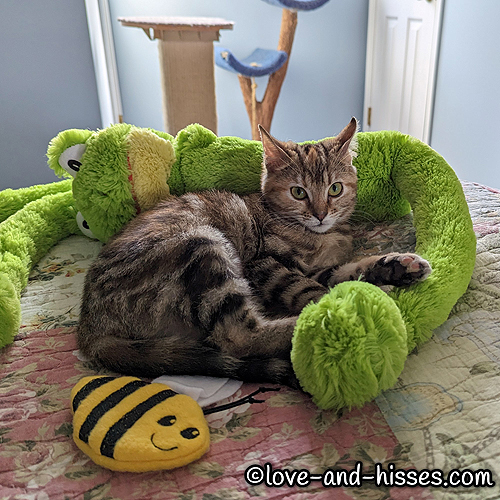 That long-legged frog is actually a dog toy, but I bought it ’cause it’s cute, and kittens always like it. Cinnaspin likes to curl it around her and fall asleep with her chin on one of its legs. I haven’t been able to catch a picture of her sleeping like that, but it is very cute.

YouTube link
Cinnaspin gives Linzer a bath and then gives herself a bath. It’s all about cleanliness, y’know. (There was, surprisingly, not any purring going on. Or it was so quiet I couldn’t hear it.) 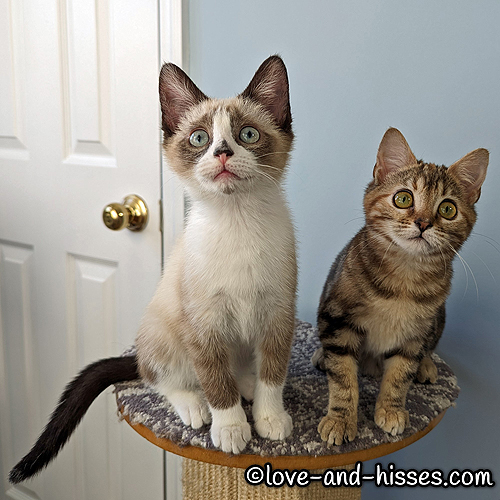 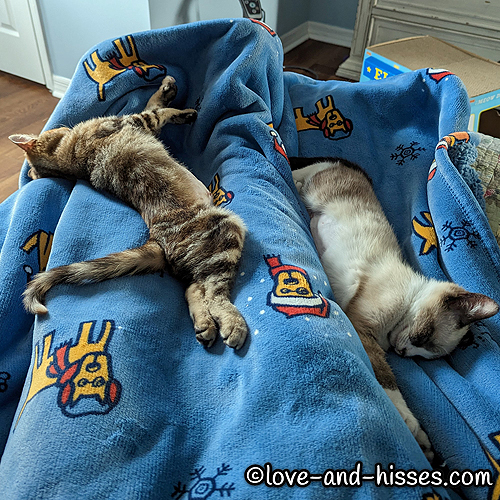