Los Gatos Hermanos (named after characters from the TV show Better Call Saul) came to us on August 1, 2022. Mama Kim Wexler and her 5 kittens were at our local high-intake animal control and desperately needed to get out of there. The kittens were 5 days old when we got them. Just a few days later, a tiny kitten was found in a hay bale (left there by his mother), and needed a place to go so we introduced him to Kim. She immediately accepted him – we named him Mike – as her own. He’s a bit small for his age, so I am supplementing him with bottle feeding.

Francesca – girl – all black, with an occasional sprinkle of white fur. Pink collar.

Lalo – boy – Siamese mix (currently looks to be mostly white, but his points are coming in.)

Mike – boy – all black with a tiny white locket at his throat and a splash of white on his lower belly.

Saul – boy – black and white tuxie with a stripe up his nose.

You can read about Los Gatos Hermanos beginning here. There are links at the top and bottom of each entry; click on the one on the right to take you to the next entry.

You can see all the pictures taken of this bunch here at Flickr, or scroll through them below.

November 3, 2022: Gustavo and Lalo were adopted together. Gus is now Darth, and Lalo is now R2. They join a wonderful family that includes former foster Angus (now Obi).

November 19, 2022: Mike was adopted and has gone home to Arizona to join former fosters Slapjack and Rummy (Canasta‘s kittens!) He is now Milo, and you can see him on their Facebook page and Instagram page. 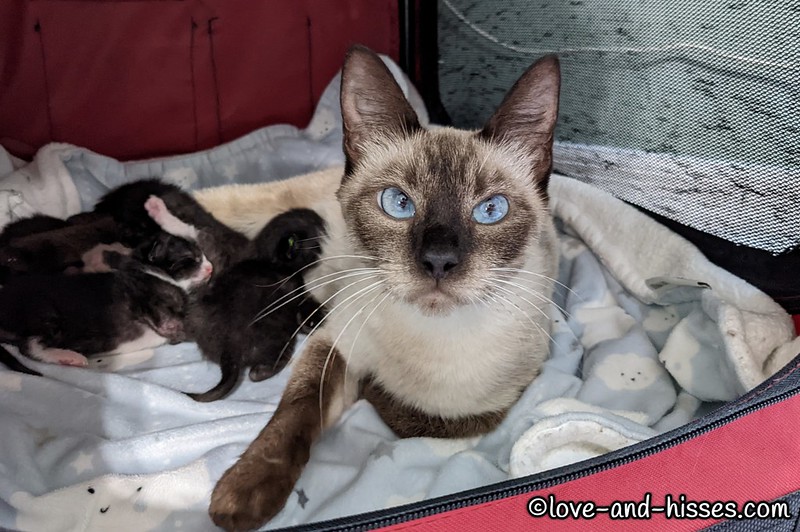 See the weight chart for this litter right here.