Much like nature, my foster room abhors a vacuum, so wanna meet the new fosters? You know you do! 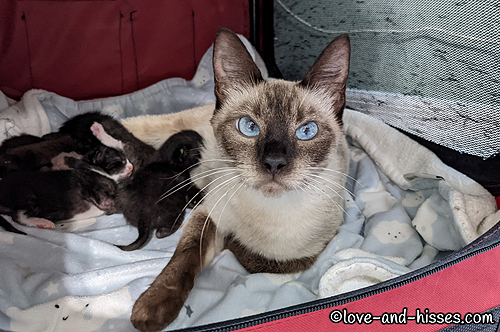 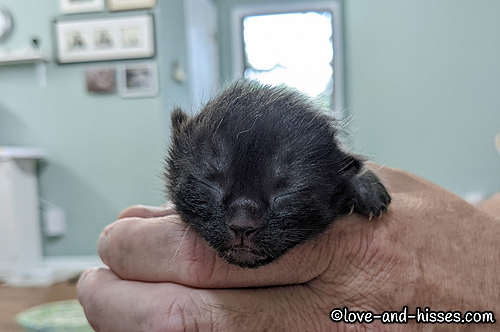 The only girl of the litter, all-black Francesca. 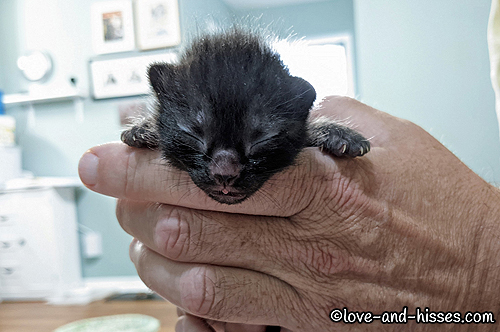 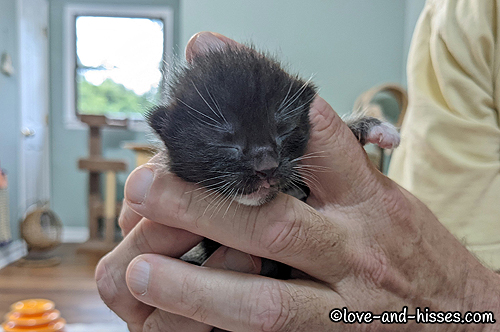 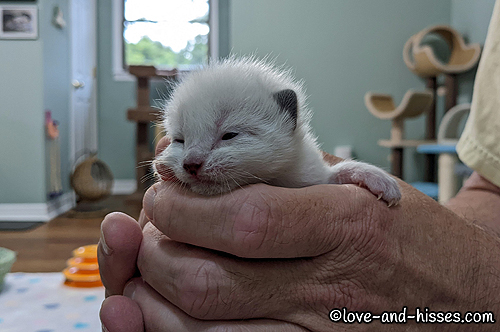 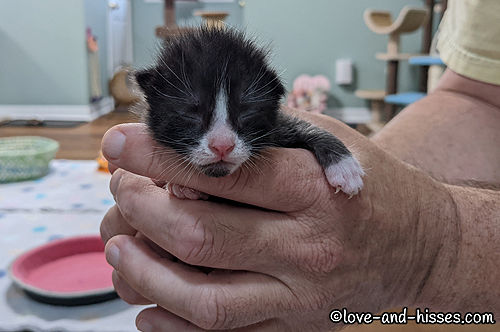 And last but certainly not least, tuxie boy (white stripe on his nose, white feet) Saul.

Either those names mean nothing to you, or you watch Better Call Saul. I have no idea yet what to call the litter as a whole (I considered “The McGills”, but am open to better suggestions.)

They came to us yesterday morning – I picked them up from our local animal control. The kittens are 6 days old, born on July 27th. And as you’ll note, Lalo already has his eyes open. The others won’t be far behind, I’m sure. I don’t know what Kim’s story is, I’m sure she was either an owner turn-in or found stray. She’s a bit timid, but super friendly and though she tends to hide when she hears strange noises, she comes right out when I go into the room. She’s a very attentive mama, and I look forward to spoiling her. 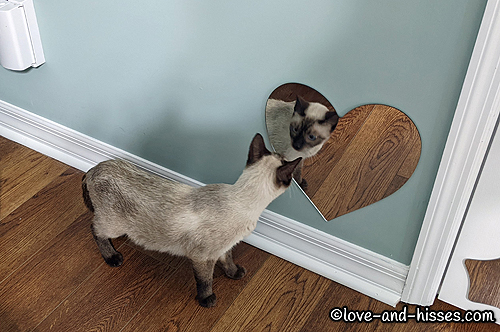 She’s not sure about those mirrors. 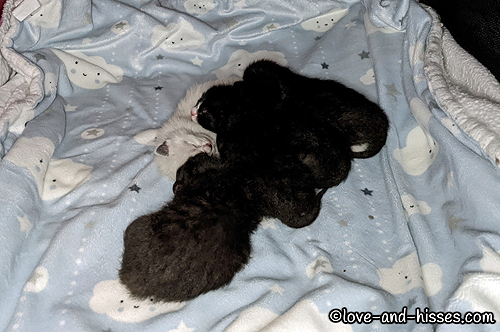 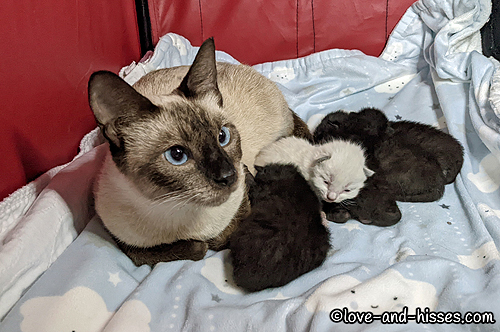 She’s so pretty – and yes, her eyes really are that blue. 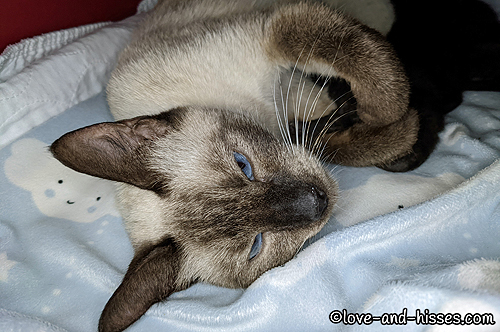 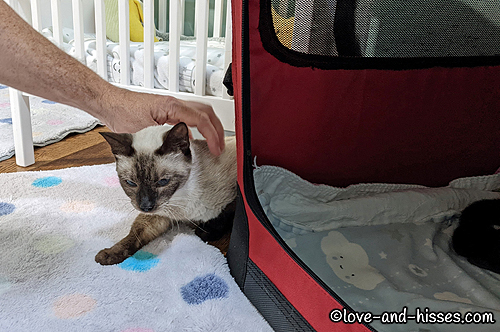 When she’s not in the crate with the kittens, she likes to hang out under the crib. Here she is coming out so Fred could pet her. 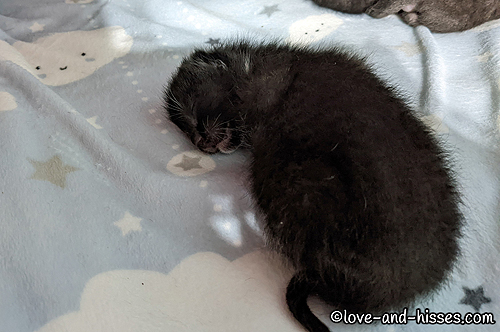 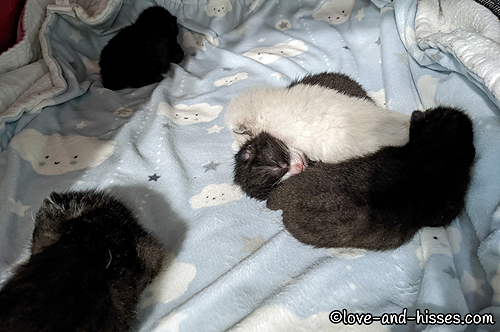 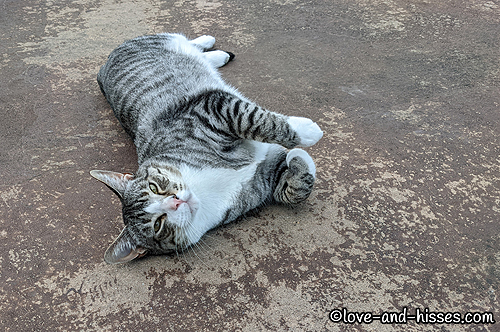 Charlie’s glad to hear that there’s a new batch of kittens for him to meet in 2 – 3 months! 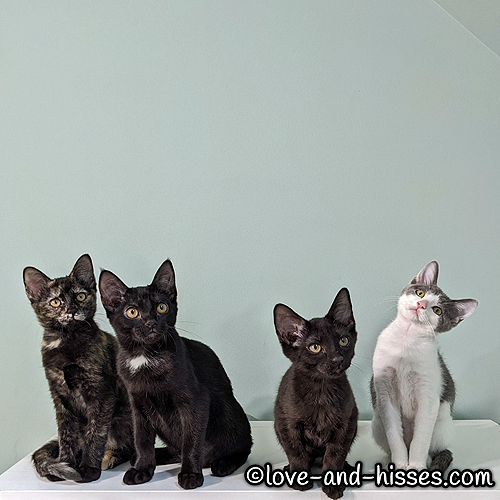 In case you missed it, Jenny, Lizzie, Roger and Brianna have gone to Petsmart. We’ve had no inquiries about them in the past few weeks, and it’s become clear they’re not going to get adopted sitting here in my foster room. They need to be where people can see them, and so Petsmart it is.⁠
⁠
While at Petsmart, they are cared for by Forgotten Felines of Huntsville volunteers, who do a wonderful job. Any adoptions are still handled by Forgotten Felines – they are only housed at Petsmart, they do not belong to Petsmart. If they remain unadopted for a while, they’ll get a break at my house or at Michelle’s.⁠
⁠
Obviously this isn’t ideal – we’d prefer them to go home straight from here – but sometimes this happens, and they need to be where people (who aren’t on social media!) can see them.⁠
⁠
I will, of course, keep you updated on any adoptions as they happen.⁠ 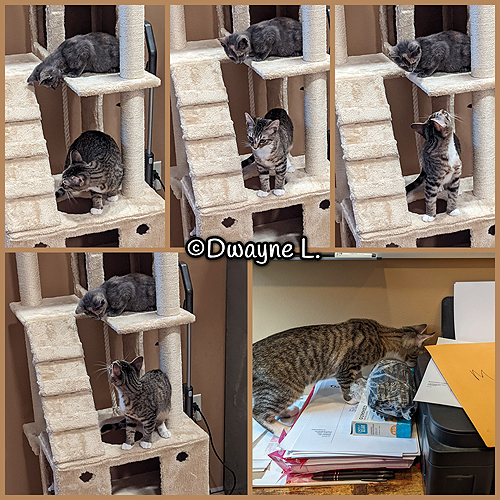 We have an update on Dolly Parton (formerly Marsali, who went home Saturday.) She and her sister Janis Joplin are still not sure about each other (but it’s early!) ⁠
⁠
Dwayne says: ⁠
⁠
Dolly has definitely bonded with me, without a doubt. She won’t leave my side. So much so that I didn’t get much sleep last night as she insisted with sleeping with her rear end in my face and attempting to shove her tail down my nose.⁠
⁠
And by the way, Dolly was definitely a good name for this little girl. She “sings” and talks all day long. I always know where she is!⁠
⁠
(Thanks, Dwayne!)

YouTube link
We get the Pusheen Box Cat Kit (it comes quarterly), and while the things inside are always popular with the kittens, the box itself is far and away their favorite thing.

I’ve documented the destruction of the most recent box, set to a soundtrack of Angus’s purr. 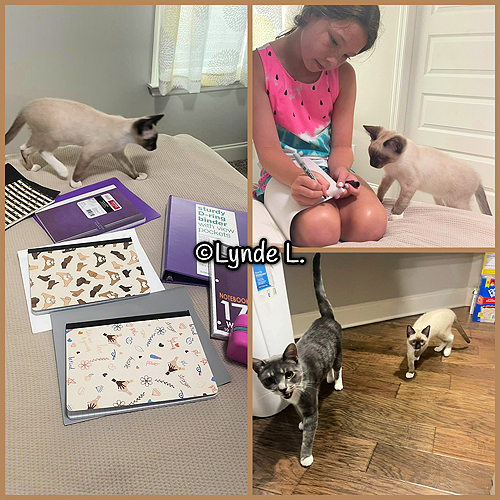 Lynde says: The kitty formerly known as Fergus, now TJ, is amazingly curious! He and his brother, Kevin, love each other like the best of friends do. And they fight like the brothers that they are 😂 We can’t thank Robyn enough for the love she shows all of her fosters 💕⁠
⁠
(Thanks, Lynde!)

YouTube link
The very first and last pictures I took of each Outlander Clan kitty. Set to a purring soundtrack, of course. They were with us for about 7 weeks, and they really changed a lot in that time! 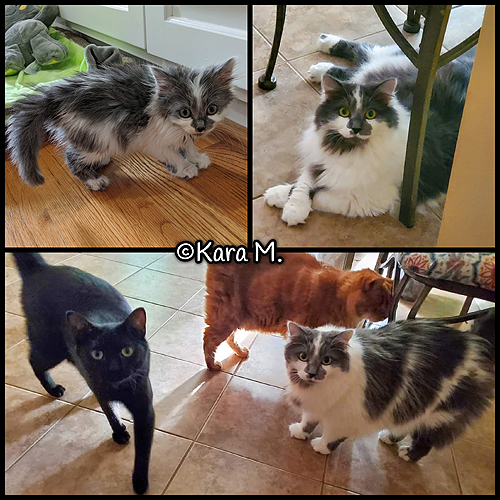 Back in 2020, we had this floofy little cutie named Winter. She was one of the Mewsketeers litter. This is what she looks like now! Hasn’t she grown to be a beauty? She crosses her paws like a proper laydee. ❤️ (Thanks, Kara!) 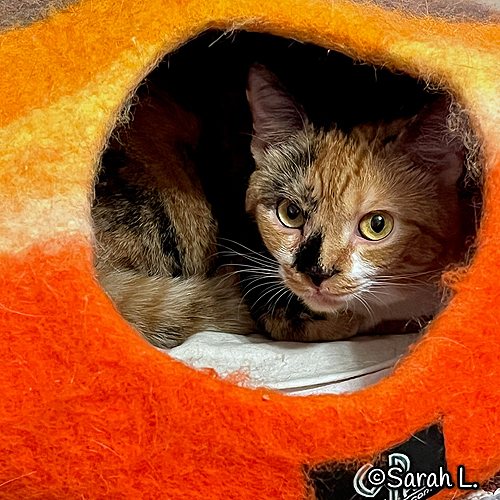 Look at gorgeous former foster KiKi! (She was Calamity Jane when she was with us back in 2020.) Sarah reports: Yes, the heat index is 103 degrees, but KiKi still thinks it’s ok to sleep in her wool cave. She’s such a tiny pretty thing & she knows it! She comes to find me several times a day if I’m working from home, just to check in, give me a tiny meow, get a pet on top of her head & then move on! So sweet 😻😻⁠
⁠
How absolutely adorable is she? (Thanks Sarah!) 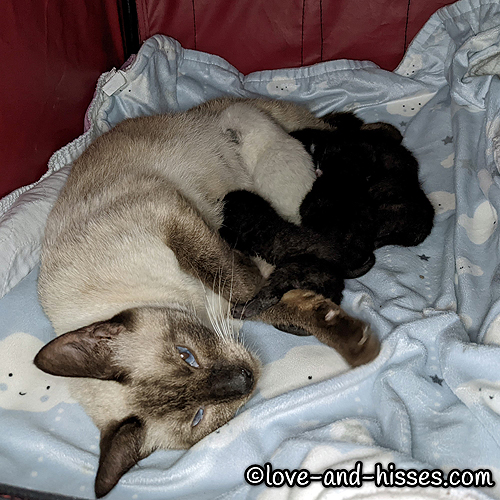