The Squash Bugs – girls Ambercup, Calabash and Pattypan and their brother Zucchini (Zuke) – came to us on August 2nd and were estimated to be about three weeks old. Their mother, a stray, had given birth to them, cared for them for a few weeks, and then disappeared. They went to Eva (bottle baby fosterer extraordinaire) for a few days, and then came to us. When we got them, Pattypan had an abscess on her right front leg, and it got worse before it got better. She required twice-daily warm compresses, dressing changes, and antibiotics for her first few weeks with us, but she finally healed up and it doesn’t look like she’s going to have any issue with that leg.

All four kittens were super snuggly and friendly as soon as we got them, and after a little longer on the bottle than they probably needed (I can’t help it, it’s hard not to spoil a happy bottle baby!), they’re now eating on their own (I’m writing this at the end of August).

The Squash Bugs have been combined with a slightly younger litter of kittens (the Swimmers) who were also bottle babies; yes – for a while we WERE bottle feeding and pottying EIGHT little kittens several times a day – and they get along like they’ve always been together.

On October 6th, the Squash Bugs went to Petsmart.

You can read about the Squash Bugs beginning here (there are links at the top and bottom of each entry; click on the one on the right to take you to the next one). You can see all the pictures taken of them during their stay with us here at Flickr, or scroll through them below. 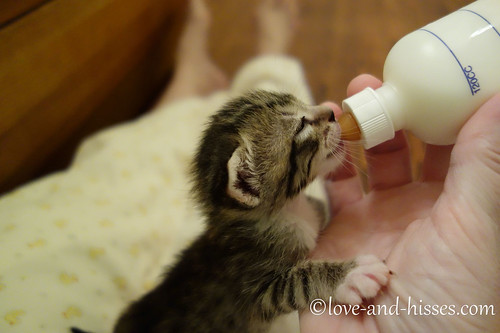