Regina Phalange came to us with her six kittens (boys: Art Vandelay, Bert Macklin and Ken Adams; girls: Chanandler Bong, Princess Consuela and Susie) on March 4, 2016 when the kittens were three days old. She belonged to someone whose cat had had kittens about a year and a half previously. He found homes for all of the kittens except Regina, and she grew up and started having kittens of her own. Currently she’s raising her third (and last!) litter, and is proving to be an exceptional mother – she keeps her babies spotless and is competent, calm, and watchful.

She is a very sweet girl who loves to be petted, have her chin and ears scratched, and lay down next to you for a belly rub. (It’s our experience that mother cats really like to have their bellies rubbed, probably because of the stress of having kittens nurse all the time. Sometimes they continue to enjoy belly rubs when the kittens are weaned, and sometimes they don’t.) She’s very thin at the moment, due to nursing all those babies, so we feed her often. She’s very playful and especially loves to bat ping pong balls around and will chase after just about every toy you toss for her. She does NOT fool around when you bring out the feather teaser – she grabs it, takes it away from you, and begins ripping feathers off. She must have been a mighty huntress in her outdoor days!

You can read about The Fakers beginning here (there are links at the top and bottom of each entry; click on the one on the right to take you to the next one), and read the explanation for the individual names and litter name in this post. You can see all the pictures taken of The Fakers during their stay with us here at Flickr, or scroll through them below. 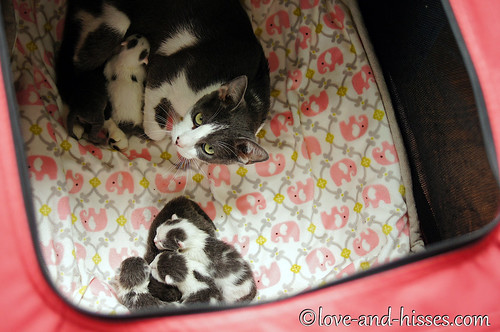