Mother Kristi (dilute tortie) and her daughter Katia (black) came to us on February 19th (Katia) and 20th (Kristi), 2018. They were part of a large colony of outside cats who were being fed by a family. The number of cats kept growing, and the people who were feeding them asked for help. Forgotten Felines trapped all the cats in the colony, and since Katia and Kristi were both clearly pregnant, they came to me to foster. Since the Winter Olympics were taking place, I named Kristi after figure skater Kristi Yamaguchi and Katia after figure skater Ekaterina Gordeeva.

Everyone who saw Kristi before I got her told me that she’d be having her kittens nearly immediately, because she looked like she’d swallowed a basketball, and they weren’t kidding. Katia was also clearly pregnant, but much smaller.

To our surprise, Katia had her kittens first in the early morning hours of February 25th, giving birth to four kittens – two black kittens (boys) and two black and white tuxie girls. Torvill, who was initially believed to be a girl, was named after ice dancer/ gold & bronze medalist Jayne Torvill. After realizing our error, we kept the name, but switched from Jayne to Torvill. Dean, also known as Deanzilla due to his propensity for charging into a crate of nursing kittens and stomping across them on his way to the milk bar. Dean was named after Christopher Dean, ice dancer/Olympic medalist and partner to Jayne Torvill. We referred to him as Christopher at first, but when we switched to Torvill’s last name after realized he was a boy, we did the same with Dean. Oksana was named after Olympic figure skater/ gold medalist Oksana Baiul. She is very floofy (she’s very light under all that fur), and we expect her to be a long-haired cat. Katarina was named after figure skater/ Olympic gold medalist Katarina Witt. Like her sister Oksana, Katarina (the kitten) appears to be headed toward the floofy side of life, and will likely be a long-haired cat when she’s done growing.

We watched Kristi nervously for the NEXT THREE WEEKS as she grew larger and larger. On the morning of March 19th I woke up knowing that I was going to take her to the vet to have her checked out and to make sure that she was okay and there were no problems with the kittens. But she showed me – she went into labor a little after 6 am, and between 6:30 and 9:00, she birthed six healthy kittens – two orange tabby boys, two Siamese mix girls, a gray girl, and a frosted black girl. The entire time Kristi was in labor, Katia was right there with her, helping to clean and care for the kittens – I’ve never had co-mothering cats, and watching how wonderful Katia was while Kristi was giving birth was amazing. This gray girl kitten was named Tessa after Canadian ice dancer/ gold medalist Tessa Virtue (you cannot have a Scott without a Tessa!) This frosted black girl kitten was named Debi after figure skater/ bronze medalist Debi Thomas (and also because the kittens were born on my sister’s birthday and her name is Debbie!) We named this little meezer (Siamese) girl Picabo after skier Picabo Street. (The only kitten not named after a skater, but Picabo Street was an Olympic gold medalist, so it’s in keeping with the theme. And Picabo is a great name for a kitten!) You can see all the pictures taken of the Olympians here at Flickr, or scroll through them below.

Edited to add: Dean and Katarina were adopted – together, yay! – at the beginning of May, and you can follow their antics on their Instagram page.

Brian Boitano and Picabo were adopted – together! – on June 23rd, and have gone to Michigan to live. Brian Boitano is now Harry, Picabo is now Harley, and you can see them on Facebook, here!

Ohno and Tessa were adopted – together! – on June 23rd, and have gone to North Carolina to live.

Debi and Scott were adopted – together! – on July 25th. Despite the fact that they were never around any dogs here, they have a new doggy sibling in their new home, who they are buddies with, and all 3 of them even snuggle up to sleep together. How cute is that?

Oksana & Torvill were adopted – together! – on September 30th. Hurray!

As of June 25th, Kristi and Katia have gone to another foster who will work with them and hopefully convince them (specifically Katia) that humans aren’t so bad.

Update, January 1, 2020: At Michelle’s house (Kitty Boot Camp), it was discovered that Kristi and Katia weren’t as bonded as initially believed. As long as there are other cats around, Katia is fine – it doesn’t have to be Kristi. And Kristi pretty much ignored Katia. Kristi turned into a lap cat! After a lot of time and work, Kristi gained enough confidence that Michelle & Brittany believed she’d be okay at Petsmart. So she has moved to Petsmart, and Katia is still at Michelle’s house.

Kristi was adopted on January 7, 2020. Unfortunately, the house was not the right fit for her so – due to reasons that are not her fault – she was returned in August 2020. She is currently at Michelle’s house and doing fine. 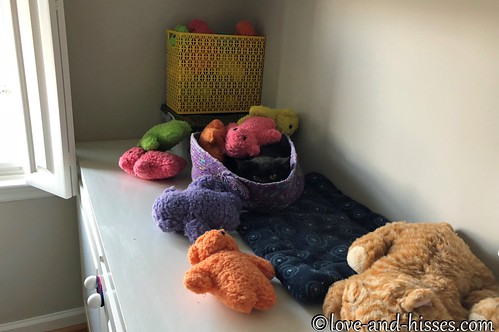