All the older kittens have an estimated date of birth of May 7, 2019. (I might be off a bit – some seem older, some seem younger – but I think I’m close.)

Adult tortie Margeaux came to us on May 28, 2019 from a rural high-kill shelter. We were told that she and her three kittens (Siamese mix kittens Jacques and Esmee, and brown tabby Amelie) were taken in from a hoarder, and Margeaux was stressed from being at the shelter and not dealing well. As it turned out, she was stressed because those three kittens were NOT hers, she wasn’t producing milk, and the kittens were skin and bones. She and the kittens had been removed from a hoarding situation along with 11 other adult females (most of them mothers) and a large number of kittens. When they put the kittens in with Margeaux, she didn’t object and so they (“they” being the people, not the kittens) assumed they were hers. (Yes, I am making that face too. All I can say is that it’s a constantly-packed shelter, and they do the best they can.) There was originally a 4th kitten, who passed away before they came to me. They joined Margeaux, Amelie, Jacques and Esmee, and the litters blended well. Katriane will let any of the kittens nurse from her, and she and Margeaux get along well. They all have French names because I joked that Margeaux was “like the French au pair who eats all your potato chips and ignores the kids.” (IT IS A JOKE, POSSIBLY A BAD ONE, AND NOT INTENDED TO OFFEND HARD-WORKING AU PAIRS, FRENCH OR OTHERWISE.) We call the blended litter Les Chatons (French for “the kittens”.)

Katriane isn’t producing a LOT of milk, but she appears to be producing enough. All of Margeaux’s (not)kittens have put on weight and are thriving since Katriane came to live with them.

Update: Margeaux had her kittens – 6 of them, 4 brown tabbies and 2 gray tabbies (3 girls, 3 boys) – in the early hours of July 10th (read the post about that here). They’re all healthy little guys, and Margeaux is taking wonderful care of them, despite her stated desire to NOT be a mother. (This will be her last litter, we can guarantee that!) Katriane is still here with us, keeping Margeaux company and acting as Auntie to the kittens, who think she’s great fun. **Antoine and Madeline were adopted TOGETHER on August 2, 2019 and are now living in Tennessee.

**Jacques and Francois (now Charley) were adopted TOGETHER on August 31, 2019.

Margeaux and Katriane were adopted – TOGETHER! – on October 11, 2019, and you can see them on Instagram, here!

Beauregard was adopted on November 12, 2019. He joins an older kitten, Lucy, in his new home.

Luc was adopted on November 24, 2019 and went to live in Maryland! He’s now Reggie, and he has a slightly older brother named Archie, and a much older sister named Lily.

Fleur was adopted on December 20, 2019. She has two siblings – one a young cat who needs a playmate so that the older kitty can have some peace.

Henri was adopted on December 31, 2019. He has two kitty siblings – one of them is our former foster Cooper, formerly known as Almanzo! – and a doggy pal named Alf. (You can follow them on Instagram or Facebook!)

You can see all the pictures taken of the family here at Flickr, or scroll through them below. 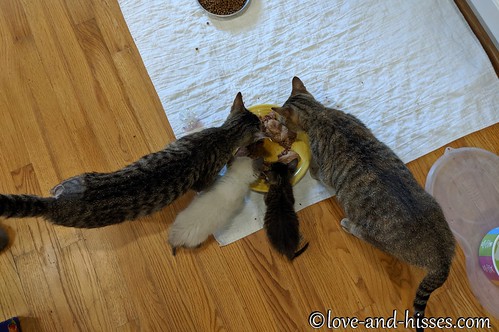