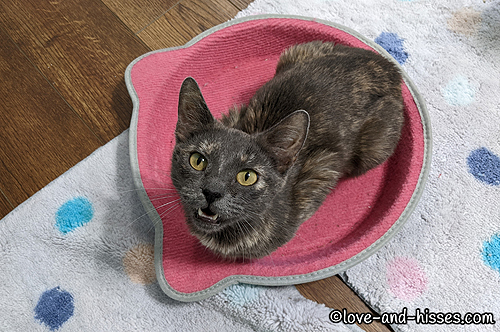 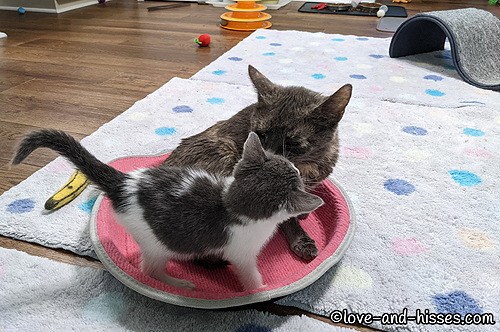 Then along came Brianna. (Jocasta gave her a bath and a quick snuggle, then sent her along her way.) 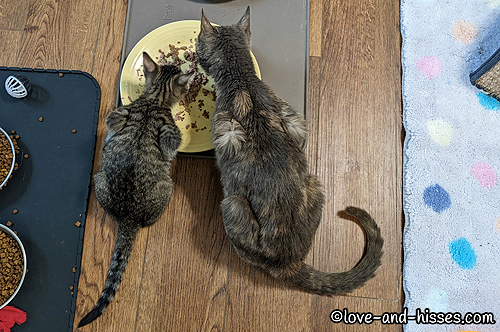 Jocasta and Marsali have a little breakfast together. 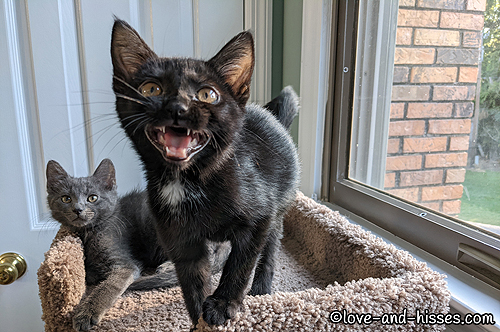 Lizzie had somethin’ to say (while Lord John looked on.) 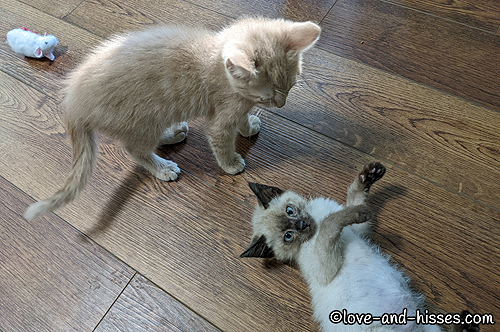 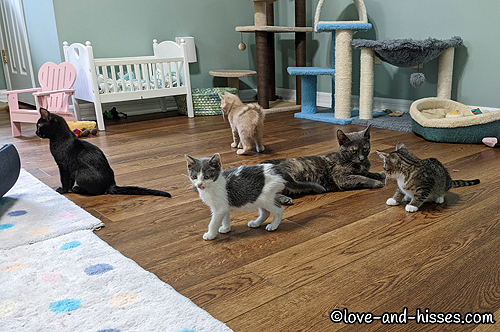 I think there was some attempted nursing, but Jocasta wasn’t having it. 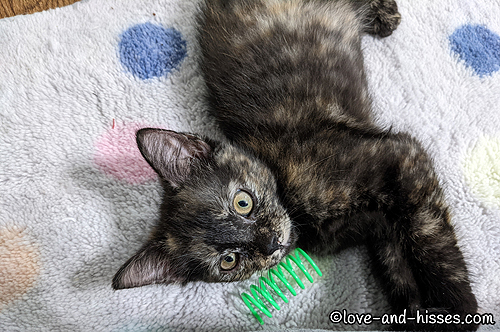 A Jenny and her spring. 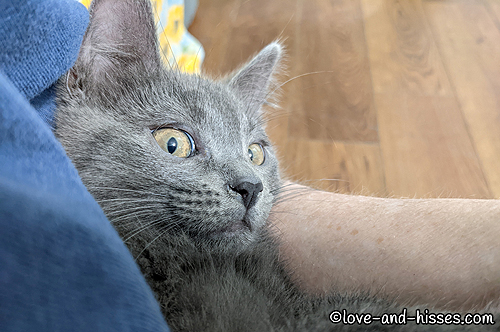 Getting in a snuggle with Lord John. 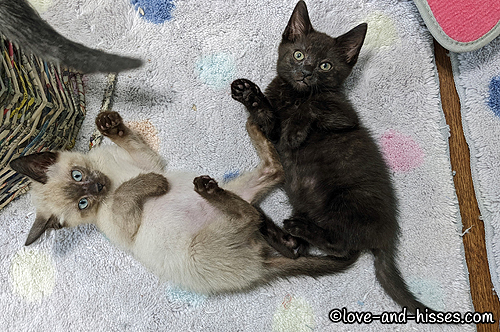 Ian and Roger are all “What, lady? We busy here!” 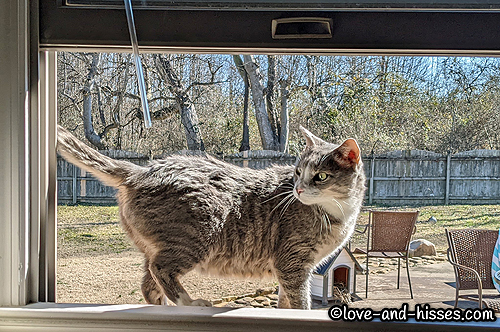 Archie loves the fact that occasionally Fred will let him out into the backyard via his bedroom window. This seems like a good precedent to set, no? (NO.)

Note: I edited these captions slightly so as to not make the entry 10,000 miles long. Please EMAIL FORGOTTEN FELINES OF HUNTSVILLE at INFO (at) FFHSV.ORG to inquire about adopting Jocasta or any of the kittens. 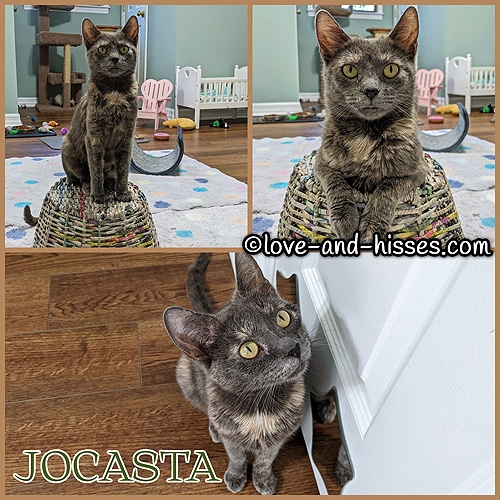 Jocasta (DOB: 6-1-20; dilute tortie female) was a neighborhood stray who came to Forgotten Felines of Huntsville with 5 of her own kittens and 1 from another cat in the neighborhood (possibly Jocasta’s niece). Jocasta’s been a wonderful mom not only to her own kittens and her niece, but also 4 slightly younger add-ins. They’re all nearly old enough for adoption now, and Jocasta is ready to move on to a home where SHE gets to be the baby! ⁠
⁠
This super-sweet, friendly, laid-back girl would be a great addition to any home. She has the sweetest trill, likes to talk to you (especially when you’re opening a can of food for her or opening the treat jar), and loves to snoopervise whatever you’re doing. She hasn’t played much in her foster home, but that’s most likely because she is always surrounded by kittens who need attention or reassurance. We’re certain that when she’s given a little space to breathe, her playful side will come out. She hasn’t been introduced to the other adult cats in her foster home yet, but we are very sure that when properly introduced, she would be perfectly fine with other cats. ⁠
⁠ 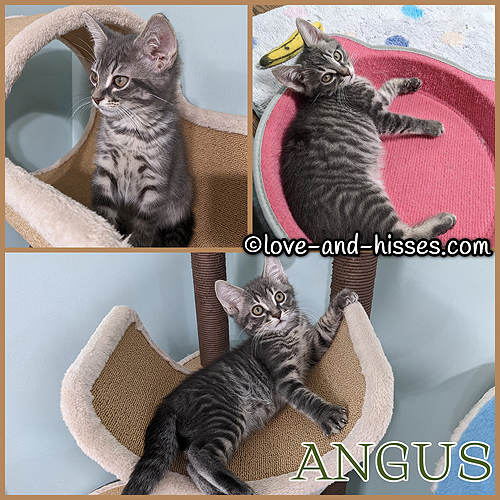 ⁠Angus (DOB: 4-9-22; gray tabby male) is a super-sweet and very playful boy who has never met a lap he doesn’t love. If you sit down, he’ll come right on over to see if you need a snuggle. If you pick him up and flip him onto his back, he just stays there and purrs while you pet him. Eventually he’ll race off to play, but once his energy is expended, he’ll be back for a snuggle, you can count on it. He loves toys with feathers on them, leaping up after the feather teaser, and wrestling with his siblings. 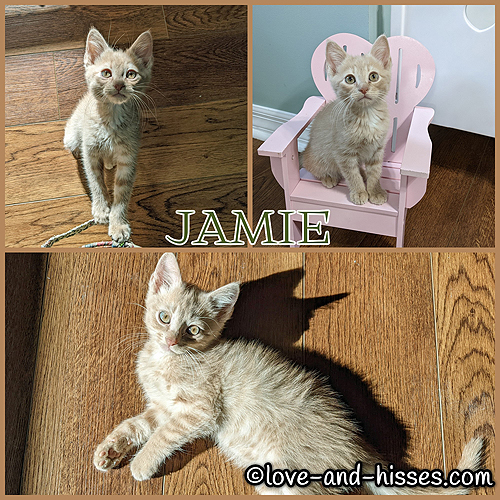 Jamie (DOB: 4-9-22; buff tabby male) is a very laid-back, very sweet boy who will sit back and check out the lay of the land before he approaches for petting and snuggles. He loves being kissed and enjoys a good belly rub, but he’s always got his eye on the activity around him. If he finds a more interesting situation, off he goes to check it out. He’s super playful and enjoys most any toy you want to toss for him, especially if it makes noise (like a rattly mouse or a jingly ball.) 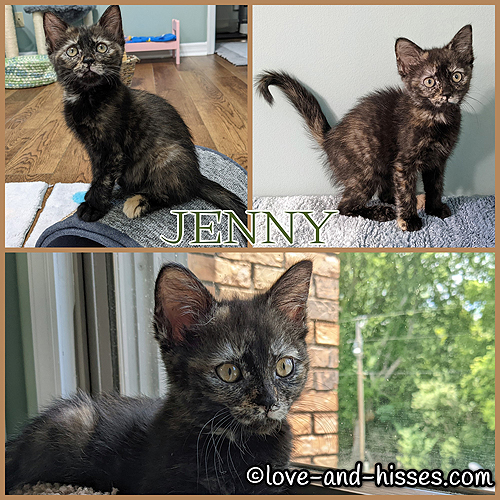 Jenny (DOB: 4-9-22; tortie female) is a very sweet, sassy girl who wants to always be in the middle of everything, keeping an eye on what’s going on, and making sure she’s part of it. She will come to you to be petted, loves to be snuggled, and enjoys a kiss or two, but excuse her she is VERY BUSY and has things to do, so off she races. She likes toys that have feathers attached, loves to chase toys that you toss for her, and adores carrying pieces of paper or cardboard around. ⁠ 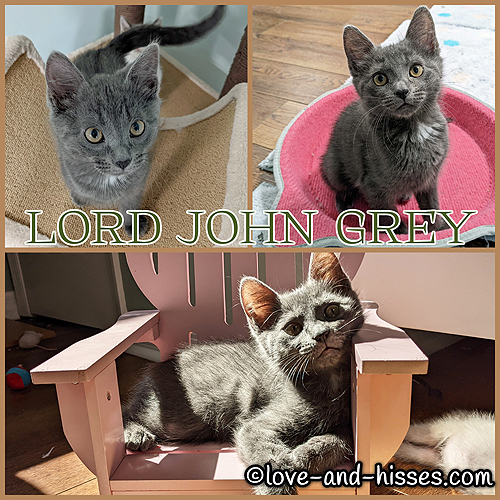 ⁠Lord John Grey (DOB: 4-9-22; gray with white locket male) is a very sweet little charmer who doesn’t really like to be in the middle of a crowd. He prefers to sit back and watch his siblings’ shenanigans and then race off to play either by himself or with one or two of his siblings. When it comes time for breakfast or dinner, he prefers to wait until everyone else has finished eating before he approaches the plate to eat. He’s not in any way shy or scared, he just likes his space! He likes bouncy toys – like Ping Pong balls – and lightweight felted balls, and will chase them for as long as you’d like to toss them. 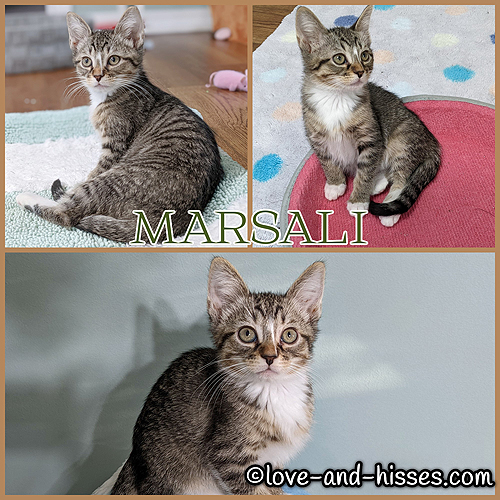 ⁠Marsali (DOB: 4-9-22; brown tabby and white female) is a sweetheart who will stomp right over to you and demand to be petted. She’ll lie in your lap for a belly rub, LOVES to have her ears rubbed, and doesn’t mind a kiss or two. She likes to be in the middle of the action and if there’s a feather teaser being waved around, she will leap up after it in hopes of capturing it. She has taken on a bit of a big-sister role with some of her smaller foster siblings, and likes to mother them a bit. She’s a very playful girl who loves it when you toss toys for her (her favorites are toys with feathers attached) and is an excellent soccer player when she finds a Ping Pong ball. 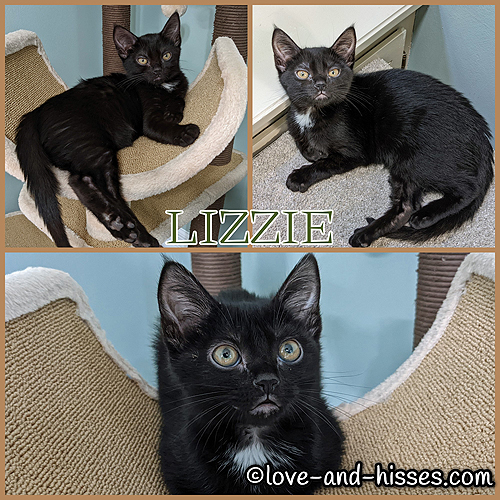 ⁠Lizzie (DOB: 4-4-22; black with white locket, female) is a very confident girl who will come right over to you to see what you’re doing. She doesn’t much care to be flipped onto her back, but she LOVES it when you hold her up on your shoulder and pet her, and she has the sweetest purr. She thinks being kissed is a little weird, but she tolerates it well. She’s got a great leap, and if there’s a feather teaser being waved around, she can jump higher than you’d expect. She also likes to chatter at the feather teaser. She’s a social butterfly who always likes to see what the other kittens are doing and perhaps join in, She loves all toys equally, and will play with whatever you toss for her. 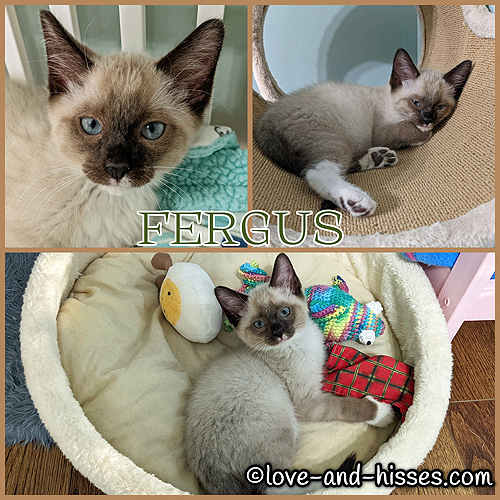 Fergus (DOB: 4-23-22; snowshoe male) was pulled from an overcrowded animal control facility along with his brothers Ian and Roger. Fergus is a very sweet boy who clearly wants to be petted and snuggled, but he can’t really sit still for long – he’s afraid he’ll miss something! – so after some quick petting, a lot of purring, and maybe a kiss or two, he races off to see what’s going on. He absolutely adores wrestling with his brothers and with his other foster siblings, and is still learning that when they cry it’s time to be gentle. He likes to play rough, but he’s a very sweet boy. When he’s sleepy, he always wants to snuggle up with another kitten – whoever’s closest will do – to recharge for his next wrestling session. He’s a very playful boy and in addition to wrestling, he loves to climb scratching posts, chase toys, and is very, very fond of stuffed toy mice and toys with feathers attached. 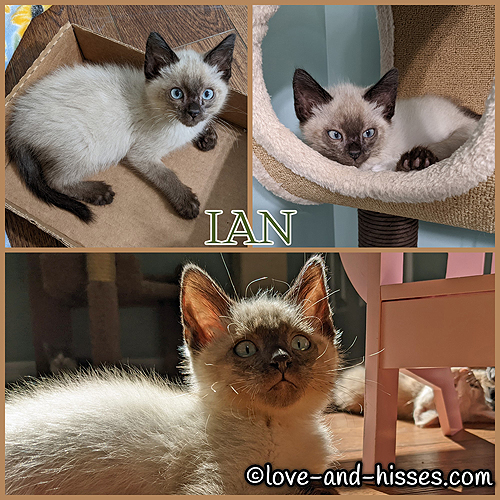 ⁠Ian (DOB: 4-23-22; seal point male) was pulled from an overcrowded animal control facility along with his brothers Fergus and Roger. Ian is a gentle sweetheart who loves to be held and snuggled. He will occasionally fall asleep in your lap, and also really likes to be kissed. He’ll allow you to flip him onto his back like a baby, but really prefers to be held up on your shoulder (…like a baby.) Ian’s a talker, and whether you’re just passing by and he wants to tell you something, or he wants you to sit down and snuggle with him, he doesn’t hesitate to let you know his thoughts. He doesn’t particularly like to jump up after the feather teaser, but he really enjoys sitting back and watching the other kittens leap. He loves toys with feathers attached, rattly mice, and jingly balls. He is also VERY fond of batting at other kittens’ tails until they get annoyed and run away. 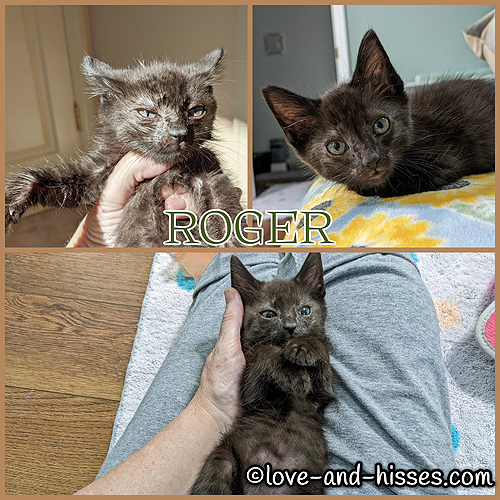 Roger (DOB: 4-23-22; black male) was pulled from an overcrowded animal control facility along with his brothers Fergus and Ian. Roger is a funny little guy who had a bit of a rough start, but is feeling much better these days, and is really developing the most charming personality. If you reach out to pet him, he arches his back up to meet your hand, and after a bit of petting he will happily flop onto his back for a belly rub. He’ll let you pick him up and hold him on his back like a baby while you rub his belly, and he just purrs and purrs. He is enthralled by the track toy, and loves to watch others play with it as much as he likes to play with it himself. His hands-down favorite toy is tails. His adopted mama’s tail, another kitten’s tail, whatever tail he sees, he’s gonna bat at it. He hasn’t discovered his own tail yet, but we’re sure when he does, it will blow his mind. Aside from the track ball toy (and tails), he loves toys that make noise (rattly mice, jingly balls, mylar balls) and is an excellent soccer player when he finds a Ping Pong ball. 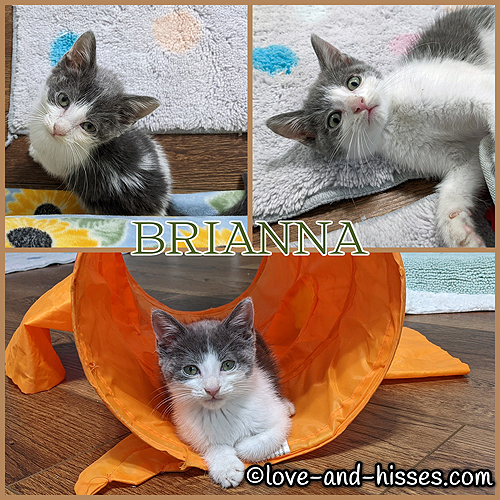 Brianna (DOB: 4-4-22; gray and white female) was the kitten of a feral cat who was scared and ran off, leaving her behind. Brianna had a very rough start and is small for her age, but she’s feeling (and looking!) much better now, and growing bigger every day. Her personality is really emerging, and it turns out that she’s a bossy little thing. She’s the first to yell when she thinks it’s time for breakfast or dinner, and she keeps up the yelling until the food is put in front of her. She doesn’t mind jumping on one of her foster siblings – whether they want to play or not – though if they get the upper paw in their wrestling match, she’s not above crying “Stop! I’m just a BABY!” She is the MOST curious little girl, and there’s not much that happens that she doesn’t want to be in the middle of. If there’s a closed door, she wants to see what’s on the other side, if there’s a toy, she wants to bat at it, and if there’s a litter box being cleaned, well – there she is, getting her business done and the person scooping the litter box can just wait. She’s a feisty girl, and hasn’t yet met the toy she doesn’t like. She’ll bat at the nearest tail, she’ll grab a plastic ring or steal a Ping Pong ball and play soccer with it. 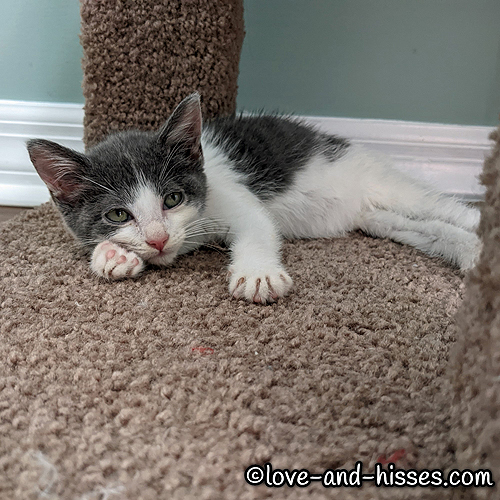