The older kittens (everyone but Ian, Fergus and Roger) will be going for their spay/neuter surgeries on July 8th, and could go home soon after. (Jocasta has been spayed and could really go home any time now.) Preference is given to people who want to adopt in pairs; all kittens must either be adopted with a sibling OR be joining a home with another cat already in residence. At this point, I am not seeing any bonded pairs among the kittens; they all get along with each other quite well.

He called him “the kitten” or one of his fall-back nicknames: Waldo or Jethro.

Hee, Fergus is cross-eyed! At least a little bit, from that photo. He’s right, he is a cutie.

Both Fergus and Ian are a tad cross-eyed occasionally! Not a lot, but you can really see it if they’re looking down at something.

You may have answered this before, but how on earth do you keep your cat trees looking so fur-free? You must have some special magic, because no matter what I try, my tree is always covered!

There are actually two answers to this: if you’re talking about the cat trees in the foster room, then I keep them (relatively) fur-free by fostering kittens. Kittens actually don’t shed much until they’re at least 6 months old. So in the kitten room, all I have to do is brush the occasional fur off the cat trees with a cat brush (I like the Furminator).

In the rest of the house, I use the vacuum attachment to vacuum the cat trees about once a week, and I also use an Uproot Lint Cleaner to get any fur the vacuum didn’t. An ad for the Uproot showed up in my Facebook feed and I bought two of them while also feeling skeptical that they’d work as well as the ad claimed. But whattaya know: it does a great job! I have cat trees on the screened porch that I nearly never clean. I think it had been at least 6 months since I’d used a brush on the cat trees out there, but I tried the Uproot on them, and got a huge ball of fur off of them. I wish I’d taken a picture, honestly, it was kind of amazing. (Look there, I just gave myself permission to ignore those cat trees for 6 months so I can demonstrate the awesomeness of the Uproot in a future post.)

Side note: Fred was brushing Archie the other day. “This brush is terrible,” he complained. That’s right: he was using the lint remover on Archie. When he switched to the Furminator brush, things went a lot better for them both.

Jocasta is the “get off my lawn” face of reality that’s almost comical in your kitten pics. Sometimes to the detriment of the pic…what a wet blanket. 😉

Jocasta’s face cracks me up. She LOOKS like she’d like to just punch everyone square in the face, but she is, I swear to y’all, the SWEETEST girl on earth. This must be the year of the mild mamas, because I can do just about anything to her (medicate her, trim her claws, clean her ears), and she just looks mildly disappointed. Never fights me one tiny bit. SO SO SWEET.

Is someone purring up a storm in the background of that second video, or is that something mechanical running in the distance? I thought I heard a motor, but it could’ve been… well, a motor, but of a different sort. 😛

These kitties are a bunch of squeaky talkers! <3 Jocasta included. Did you ever figure out who was growlyhissing for a second there?

I think (though I can’t swear to it) that it’s something off in the distance you’re hearing. Our neighbors are getting a new septic tank, so there’s been heavy equipment running next door for the past couple of days.

I didn’t really determine who the hissygrowler was, but a safe bet is that it was either Fergus or Roger, because those two seem to be the usual culprits. 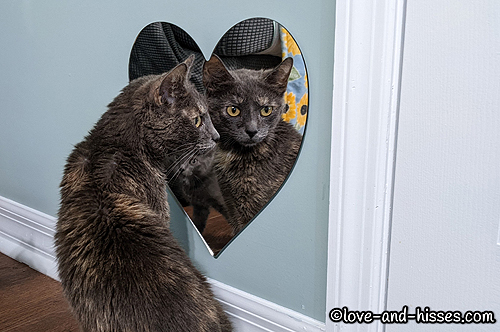 The mirrors are up, and Jocasta is enthralled. 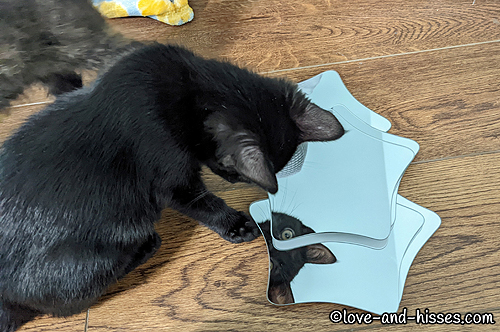 Lizzie helped me put the mirrors up, but kept getting sidetracked by the pretty girl she kept seeing. 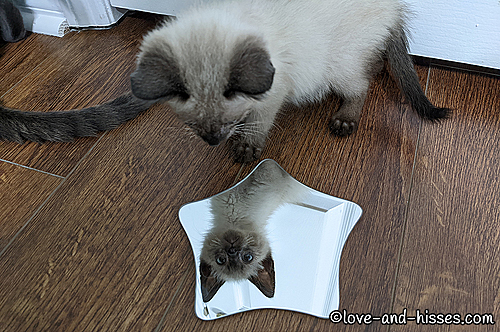 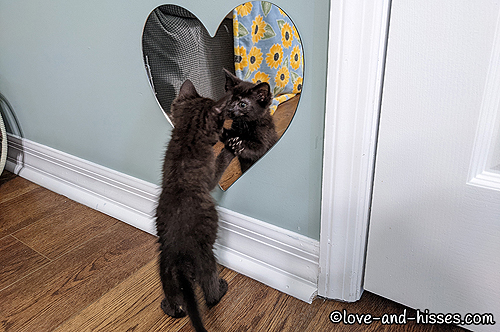 Roger was all “What is going onnn?!” 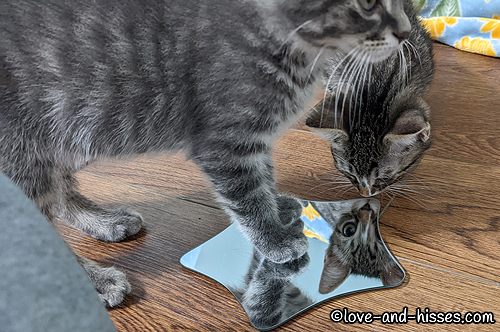 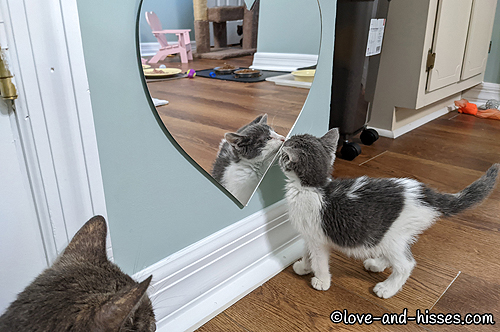 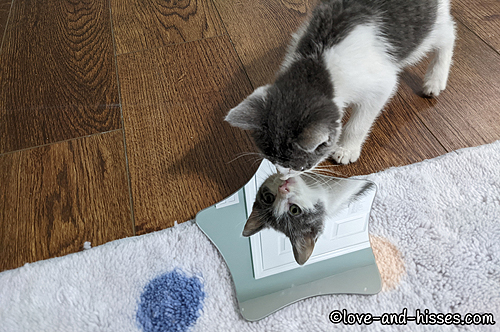 And Brianna checking more things out. 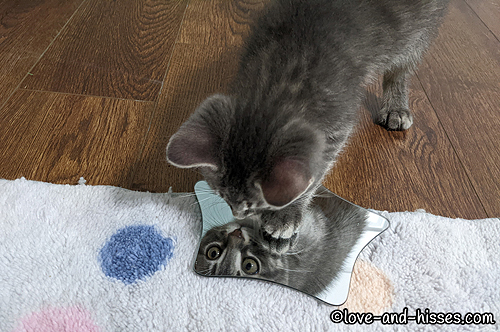 Angus is all “Now, that is a good-looking guy right there!” 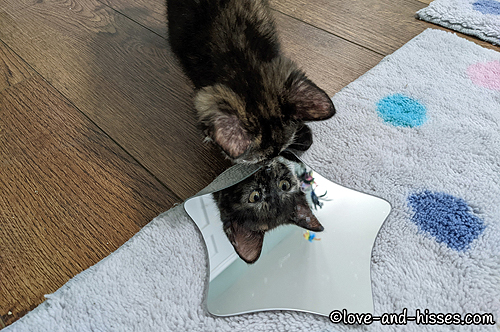 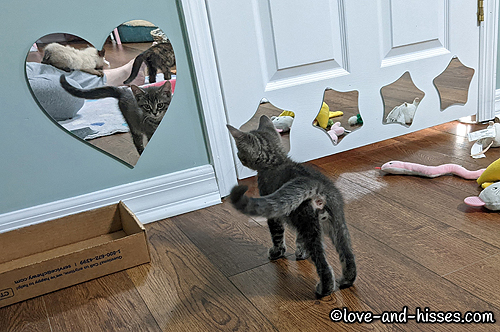 Angus admiring himself. (And in the reflection, Ian balancing on my leg.) 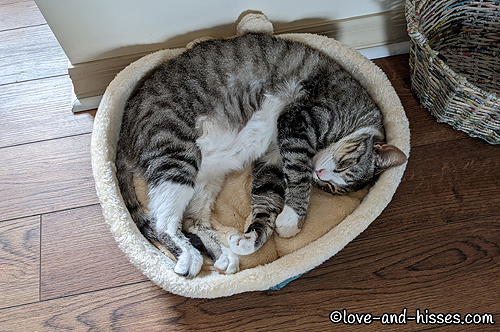 When Charlie’s inside during the day, that’s a sign that it’s TOO DARN HOT out there. 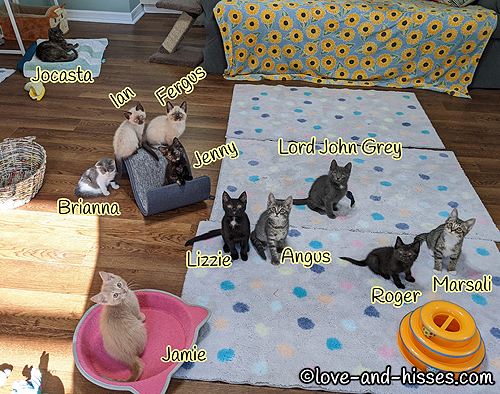 If you are interested in adopting any of the Outlander Clan kittens or mama Jocasta, now is the time to inquire – email Forgotten Felines of Huntsville at info (at) ffhsv.org ! (PLEASE please please read the entire post before inquiring.)⁠
⁠
The older kittens – Lord John Grey, Angus, Marsali, Lizzie, Jenny, Jamie and Brianna – will go for their spay/neuter surgeries on July 8th and will be able to go home shortly after. The three younger kittens – Ian, Fergus & Roger – are not old enough yet, and will be neutered later in the month (after July 23rd.)⁠
⁠
PREFERENCE IS GIVEN TO ADOPTERS WHO WANT TO ADOPT PAIRS. Kittens must EITHER be adopted in pairs OR be joining a home with at least one cat already in residence.⁠
⁠
There are no bonded pairs among this bunch – they all get along really well with all the other kittens. ⁠
⁠
We are located in Huntsville, Alabama. Adoption to other states is allowed, but adopters MUST COME HERE to complete the adoption – Forgotten Felines of Huntsville does not transport kittens.⁠
⁠
Once again, EMAIL info (at) ffhsv.org TO INQUIRE ABOUT ADOPTION. Leaving a comment stating that you are interested in adopting on Facebook/Instagram/Twitter posts, writing it in your own private diary, whispering it to a dear friend, or shouting it to the heavens is not considered inquiring about adoption (I don’t always see every comment until sometimes days later). Emailing Forgotten Felines of Huntsville is the only way forward, my friends. One last time (for this post) – that’s info (at) ffhsv.org 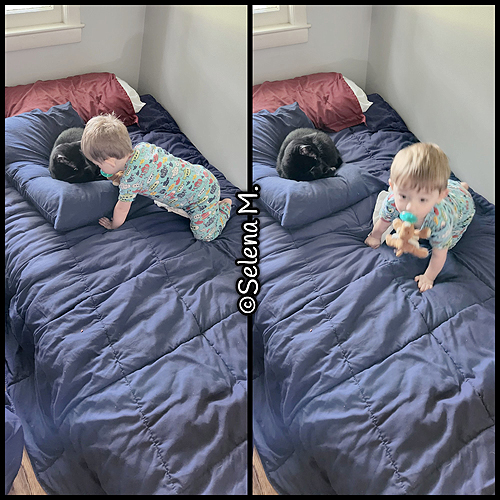 How absolutely adorable is this? That kitty is Flynn (formerly our foster Kohle, 2012) and that child is Jordan, his kitty-loving brother. There are mattresses on the floor at their house for now (waiting for beds to be built), and Flynn and Jordan think it’s the best thing ever! (Thanks, Selena!)

YouTube link
Roger is pretty sure Jocasta’s tail is the best toy EVER. And she is so patient with him, such a sweet girl! 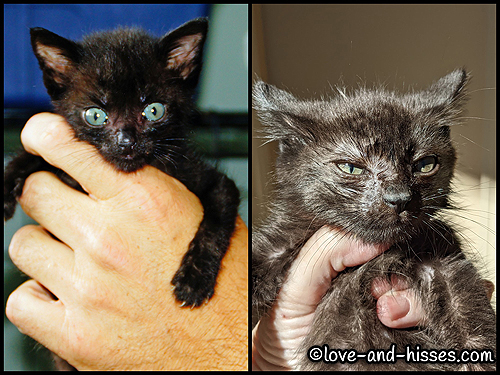 In 2012 (!) we fostered a litter of kittens known as the Pickles, which included this little black kitten (left), Tony (Rocky Horror) Pickle*. Whenever I get a little black kitten who’s a hot mess, I immediately think of him. Here’s Roger, right, for comparison.⁠
⁠
Tony (Rocky Horror) Pickle was a MESS when we got him – not only was he the runt of the litter, but he had worms and coccidia, and didn’t want to eat. At one point we thought we were going to lose him, but he pulled through and thrived (he was adopted with his brother Joe Pickle, and renamed Toothless, after the dragon in How to Train your Dragon.)⁠
⁠
*We actually got Tony (Rocky Horror) Pickle a few days after his siblings. The siblings were Petey Pickle, Percy Pickle, Joe Pickle and Polly Pickle. ⁠
⁠
Fred had been wanting to name a kitten Tony Rocky Horror** for years – at one point we talked about naming a whole litter of kittens after characters in TV and movies who are referred to but never seen – and after we got the four Pickles, I told him that next time we had a single male kitten, we’d use that name. I didn’t REALLY think that this counted as a single male since he DID have a litter, but rather than fight it, I gave in.⁠
⁠
**Tony Rocky Horror is a character in Pulp Fiction who is referred to, but never seen. He got thrown out of a window for giving Marsellus Wallace’s wife a foot massage. Vincent (John Travolta) and Jules (Samuel L. Jackson) talk about it – and Tony Rocky Horror – at length.

YouTube link
The Outlander kittens are big BIG fans of the feather teaser! 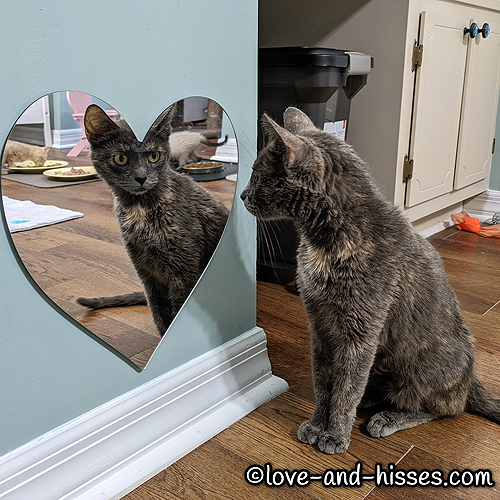 The mirrors are back! (I took them down so that the room could be painted.) Jocasta is all “Who IS that gorgeous girl right there?!” 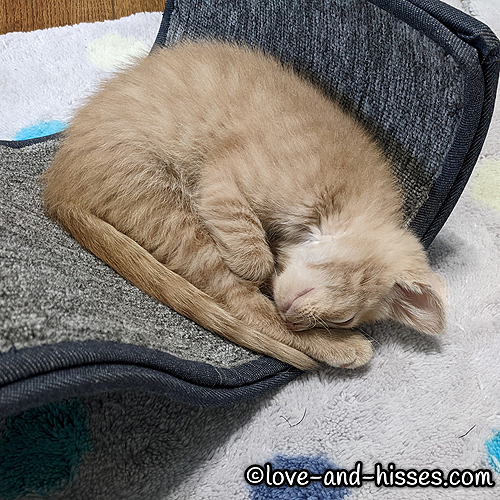