Have you noticed a flavor preference with the Churu? I tend to stay away from flavors I know my kitties avoid as wet food, or is that wrong?

I’m a newbie when it comes to that stuff.

I haven’t noticed a flavor preference – they always seem to ADORE whatever I offer them!

OK- the cats are adorable, but how on earth do you keep those banisters dust free??

I keep threatening to put Swiffer slippers on the kittens and let them do the work, but until that happens, I just wipe them down whenever I think of it. I wish I had a more interesting answer!

I know cats/kittens sneeze and yawn and even fart. But have you ever had a kitten burp?

I ask because I accidentally burped in my ginger and white girl’s face (Dr. Pepper will do that for ya) and she looked SOOOO offended. I’ve sneezed in her face and she in mine, and we’ve traded yawns before. But I’ve never had her, or any previous cat, burp. Ever. Or at least not in my hearing.

Google says it’s possible. But has anyone actually seen/heard one?

Oh absolutely, I hear kitten burps all the time (usually right after they’ve eaten!) I hear the occasional burp from the adults, too, but not nearly as often.

Thanks! I got it at Target and I love it too!

If you foster again, how will I know?

I’m not going to suddenly stop fostering now, believe me. New fosters will show up on the blog or social media (Facebook/Twitter/Instagram/Tumblr) – I should have new fosters in about a week (depending on how the work on the house goes). 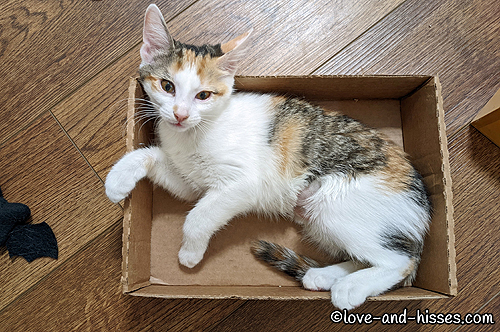 This picture of Hollyhock was taken the night before last – Wednesday night – right before bed. She was still a little glassy-eyed and groggy from her spay, but by yesterday morning she was bright-eyed and racing around. 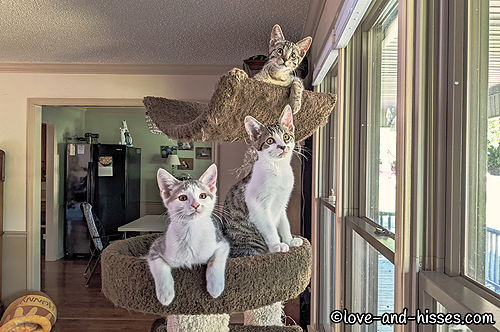 Kudzu, Bramble and Mondo hanging out on the big tree. 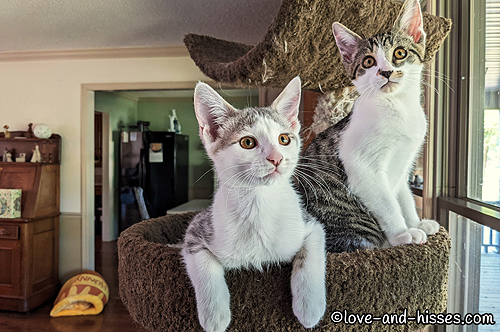 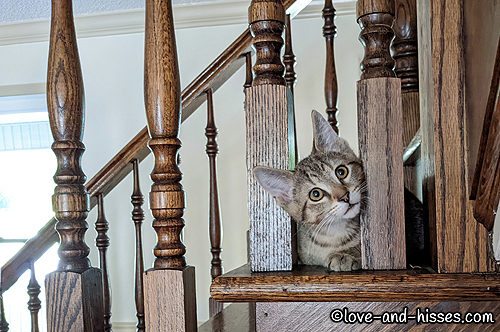 Clover’s keeping an eye on me. 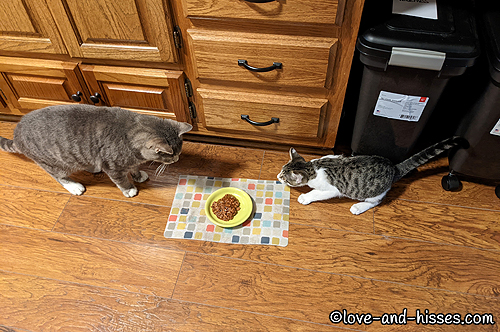 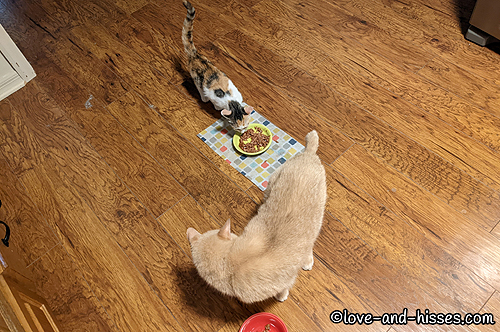 And then Uncle Newt was eating off that plate, but was distracted by this little bowl of food Fred had put down, so Hollyhock thought the plate was fair game and Newt said “HEY.” 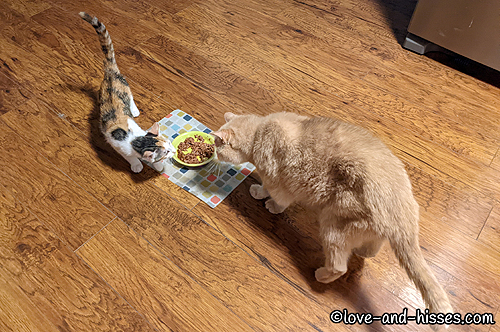 Uncle Newt came back to the plate to eat, while Hollyhock watched. I love the way she’s so interested and respectful of the permanent residents (even if they’re not interested in her.) 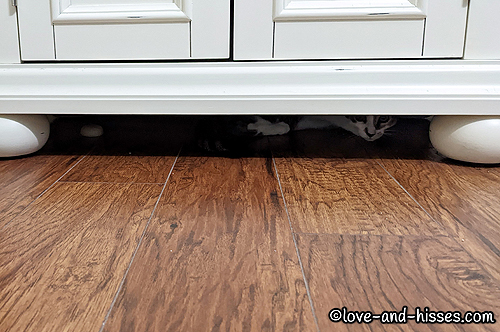 There’s this storage pantry in the dining room, and I would not have guessed a kitten could fit under there, but Bramble saw something interested and just kind of eeled his way under. He’s so long and lanky right now! 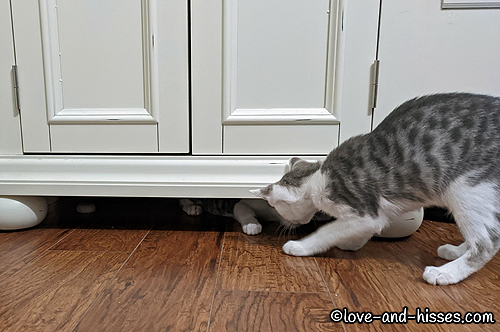 Kudzu was all “Send out any toys you find!” 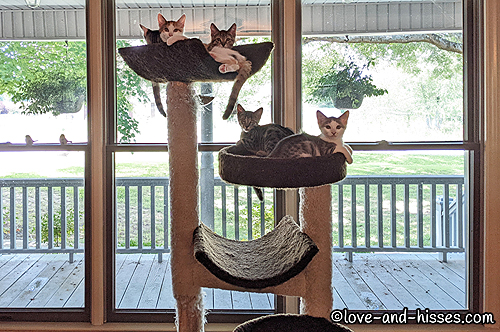 All 5 cats on the big tree – though Bramble was too busy looking out the window (top level, behind Hollyhock) to look at the likes of me.

The kittens are headed out of here tomorrow morning – Bramble and Hollyhock in the early morning, and Kudzu and Mondo later. That will leave us with Clover, who has diligently been making friends with the permanent residents (and making headway with Charlie). As mentioned in yesterday’s entry, we are having work done on the house next week, so posting here will likely be sparse. I will definitely do a wrap-up post on Monday, and then probably take the rest of the week off from the blog. 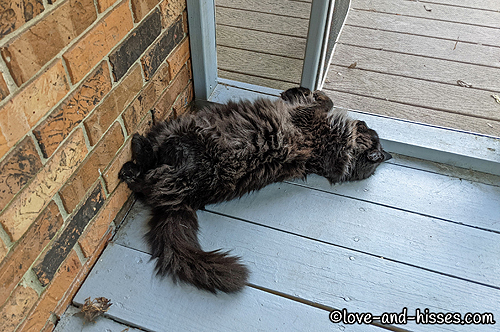 In recent weeks, Khal – the magnificent pile of fur you see before you – has taken to snoozing in this spot on the back porch. I’m not sure why this spot is such a favorite, but no one seems to mind having to walk over him to get through that entrance behind him, so whatever Khal wants is fine with us all. 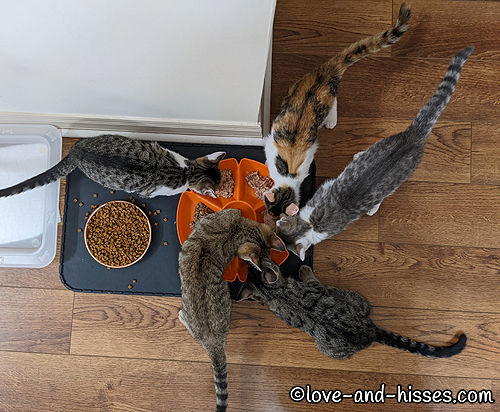 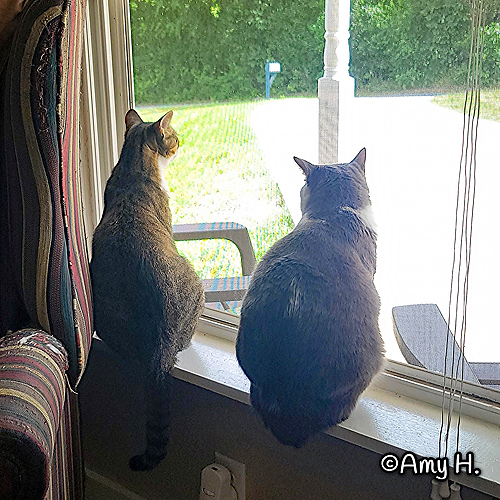 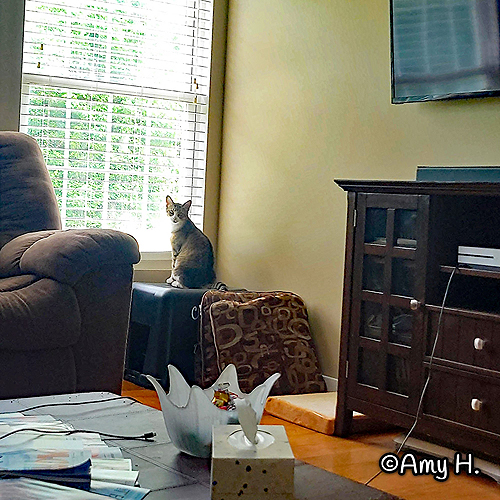 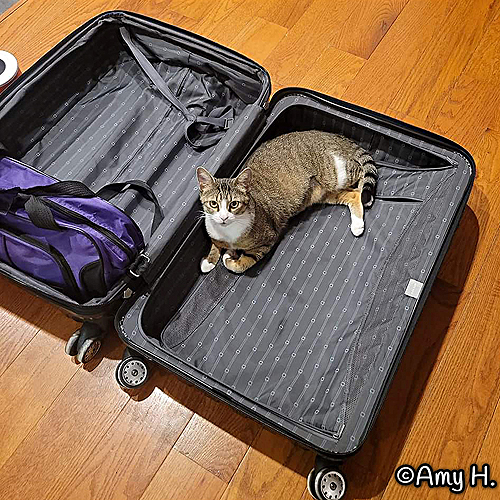 We have a Mimosa update! Amy says: “As you predicted, she is chief bird watcher. Her sister Puma (Bob tail kitty in first photo) is still quite unsure of this new kitty but all is well on that front. Also, Mimosa LOVES cat grass. I can’t get her to stop bothering my propagates on my window sill!”⁠
⁠
Thank you, Amy! ❤️

YouTube link
Kudzu and Clover at play. I’m not even sure what to call this move, where they rear up on their back legs and kind of bounce around – but it always makes me laugh. 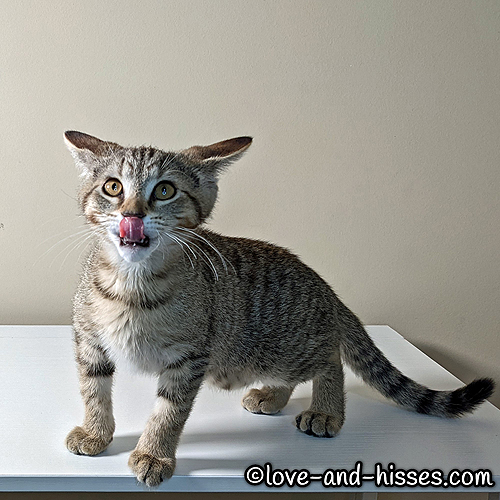 It’s Thlurrrpsday, and please note that Clover is a multi-tasker. Thlurrrping and Ears of Annoyance at the very same time! Nicely done, Clover.

YouTube link
Bramble was dreaming, and then he woke up and had to tell me all about it. And then Hollyhock got talkative, and then everyone was clearly waiting for me to join them for nap time, so. They’re the bosses of me! 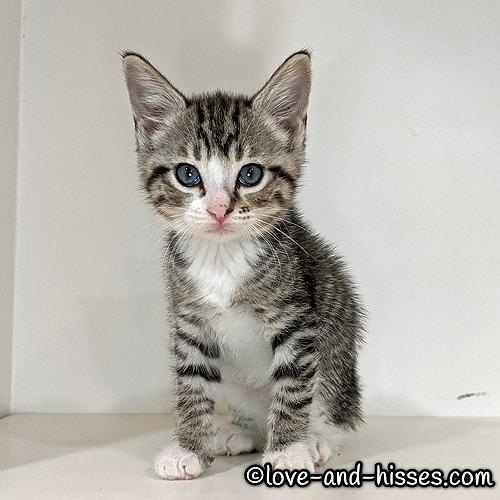 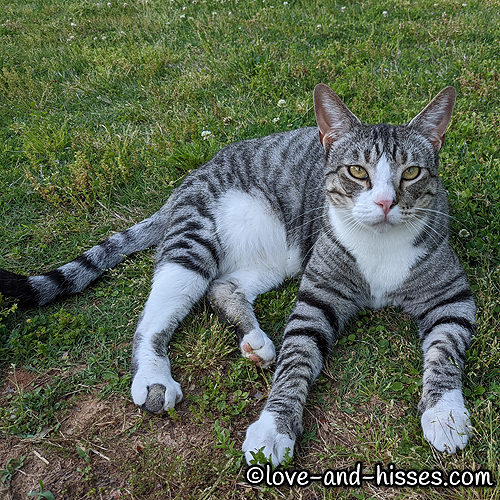 Happy 2nd birthday to Charlie (aka “Uncle Charlie”), who came to us as part of the Mewsketeers litter in July 2020. He was named Aramis then, but when we decided to adopt him we changed his name to Charles, Prince of Wails due to the fact that he’d sit outside any closed door and wail like his heart was breaking. (He still doesn’t like a closed door, but he deals with it more quietly, for the most part.)⁠
⁠
We initially had no intention of making him a permanent resident, but as his foster siblings were adopted and we faced the idea that the last three kittens might have to go to Petsmart, he suddenly seemed like he might be permanent resident material (side note: the other two kittens were d’Artagnan and Porthos. They were adopted together and got to go home without a stay at Petsmart). He got along really well with not only his foster siblings, but also the permanent residents. He and Archie became buddies and were often seen playing together, and after a little while he and Jake became good buddies, too. The clincher was when he walked toward Alice – who finds kittens somewhat terrifying – and when she hissed quietly at him, he changed direction and avoided her. He turned out to be a really good choice to become a permanent resident (not least because he is very interested in being friends with the fosters!) and remains an all-around sweetheart.⁠
⁠ 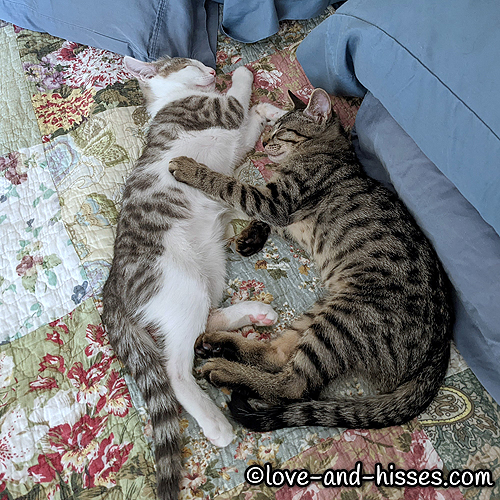