We are home again! It was a very, very long week filled with anxiety over whether the people doing the work on the inside of the house would finish by Friday. But bless them – they showed up early every morning, worked until at least 5:30 every evening, and finally finished up at 10:00 Friday night.

I don’t think I mentioned specifically what we had done – we had the textured (“popcorn”) ceiling removed through the house, and had the hallways (upstairs and down), front room, and stairwell painted. Having your textured ceilings removed is unbelievably dusty. They cleaned up once they were done, but we’ll still be cleaning dust out of every crack and crevice of this house for the foreseeable future. At one point, it was our plan to live here while they were doing the ceiling, and have them do it in stages (upstairs first, then downstairs), but there is absolutely no way that would have been feasible. If the dust didn’t get us, the fumes from the paint would have. Though the whole experience was super stressful, I’m glad we did it the way we did.

Although there’s the occasional flaw in the ceiling and the occasional dribbled paint on the walls or trim, I am beyond happy with the job they did, and think that the house looks 1000% better.

(I’d offer pictures here, but I don’t really have any yet. I’m hoping to get pictures taken and posted by mid-July, which will mark 1 year that we’ve been living here.)

There are still a few rooms left to be painted and otherwise redone, but we’ll do that slowly from here on out.

We slept in a hotel about 10 minutes away, and spent our days at home in the garage. We’d moved Fred’s office and my desk to the garage, moved the big cat tree (and many toys) out to the garage for Clover, and moved a recliner out there, too. Clover traveled back and forth between the hotel and the house with me every morning and evening. When we first checked into the hotel, he walked around, his tail in the air, and checked out every inch of the place. He handled the whole experience even better than I’d hoped. 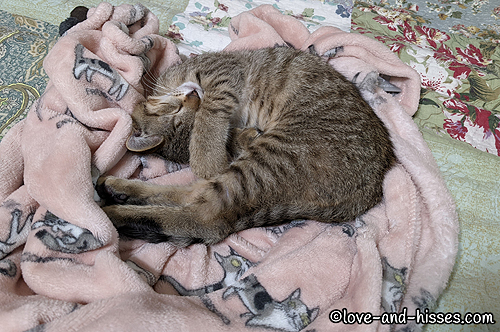 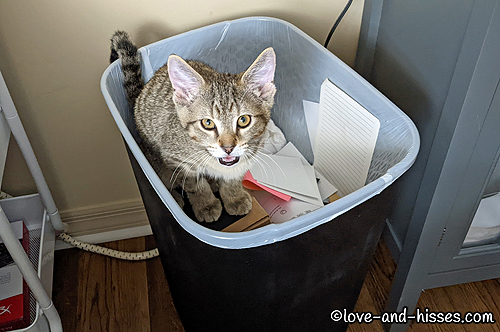 Judging my trash can. “Lady! You throw too many papers away!” 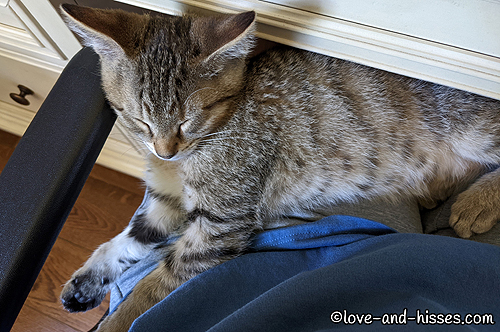 I’d say it’s safe to call him a lapkitten. 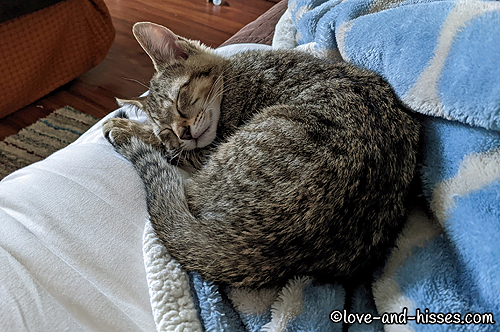 He slept with me every night at the hotel, only getting up occasionally to play. 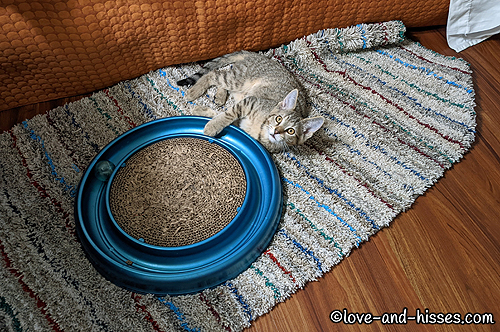 I packed a LOT of toys and beds for our hotel stay. He appreciated that I brought the track toy. 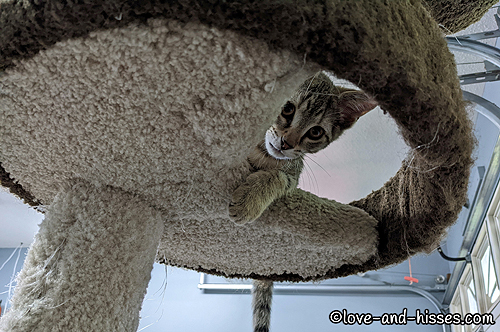 Atop the cat tree in the garage. 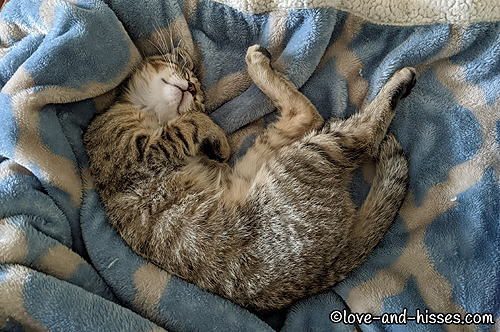 The boy can sleep. 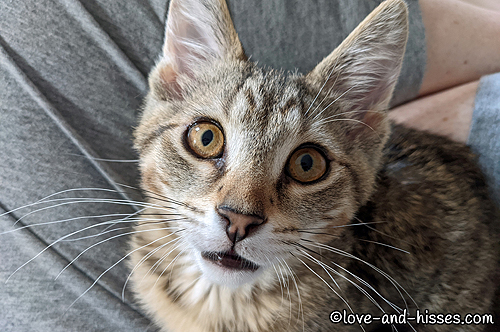 Now that we’re home, he’s having a blast. Between all the toys (which I brought BACK from the hotel, of course), the permanent residents to stare at, and the room to RACE from one end of the house to the other, he’s keeping busy. When he wants attention, he’s not shy about coming to let me know. I pick him up, snuggle him, and then put him down so he can go racing off again. 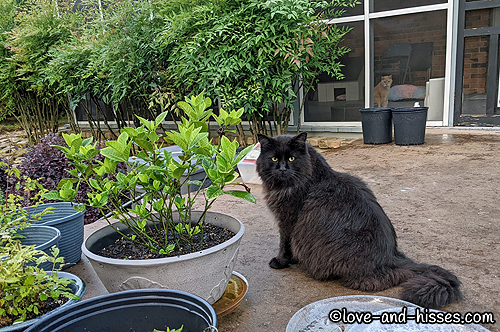 Khal checks out my gardenia while Newt photobombs from the screened porch.

The permanent residents handled the whole thing pretty well. Newt was a little irritated at the change to his routine, but I’m not sure the others even noticed. They always spend a lot of time on the screened porch anyway, so this wasn’t that different for them. They’re glad to be able to get back into the house (especially Newt), but I’d say their routine wasn’t too upset.

(We did consider taking Newt to the hotel with us, but he is a TERRIBLE traveler, and I’m not sure he would have appreciated having a kitten in his face, so we decided against it.)

Posted on social media (Facebook/Twitter/Instagram/Tumblr) over the past week. 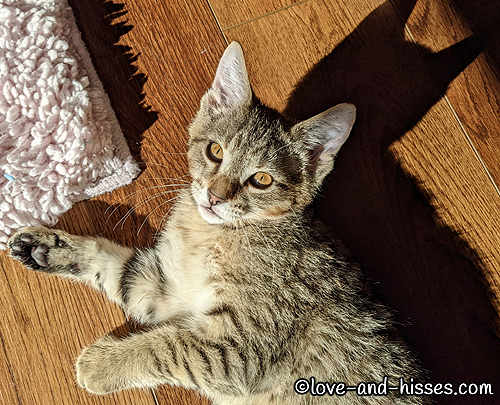 Clover is SUCH a pretty boy.⁠
⁠
In case you missed it in today’s blog post: we’re having work done on the house this week, so we’re checking into a hotel this afternoon and will be spending a few nights there. Clover will come with us, and the permanent residents will stay on the screened porch (which is where they spend the vast majority of their time anyway.) Fred will return to the house to work each day (we moved his office into the garage.) We will ALL be very glad to have this week behind us!⁠
⁠
So there’ll be no more blog posts this week, and though I MIGHT occasionally post on social media, posts will most likely be few and far between. Keep your fingers crossed that all goes smoothly, and that we’ll be back to normal by the end of the week. 🤞🤞🤞⁠ 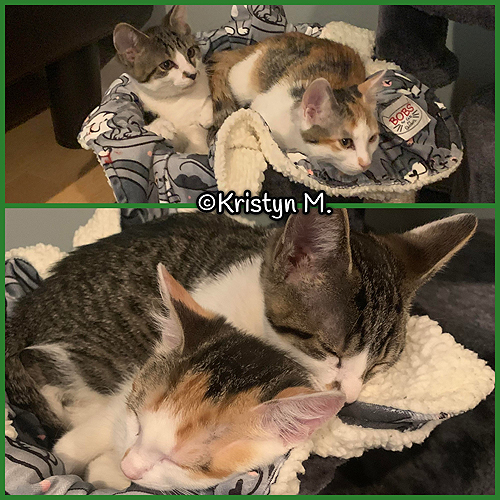 We have an update on Bramble & Hollyhock! Kristyn says: ⁠
⁠
“Hollyhock and Bramble have settled into their interim room beautifully. They purr now whenever we go in and we’ve all had some lovely napping snuggle times as well as plenty of crazy playtimes. Stompers is still nervous of them, but doing better. Today I had him sit in his favorite spot with me while my husband and son carried the kittens in. He stayed calm even with them very close, only giving a hiss or two. Afterwards we gave him treats and praise. I’m hoping to keep gradually increasing their time together over the week. We are doing everything we can to make him feel loved, safe, and know he isn’t being replaced, but just getting new friends! For their part, they are utterly fearless and just interested in him. Not a hint of floof!” (Video coming in a little while!)⁠
⁠
I just love seeing them so happy! (Thanks, Kristyn!) 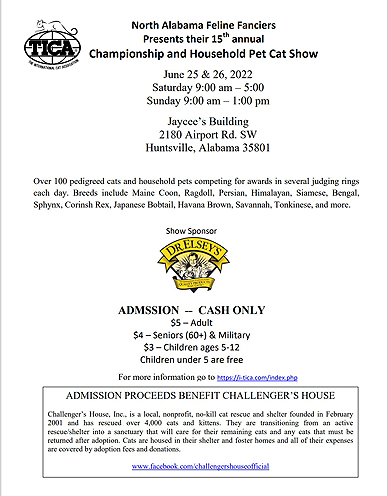 If you’re in the Huntsville, Alabama area, the annual cat show is coming! It benefits Challenger’s House – they receive 100% of the gate income.

Challenger’s House is looking for volunteers to help out during the cat show (it’s simple, just wiping down cages between occupants, and there are a lot of cool kitties to see.) You can email them at challengershouse@mchsi.com, call at (256) 420-5995 (leave a message), or message their Facebook page Challenger’s House, Inc. – Official 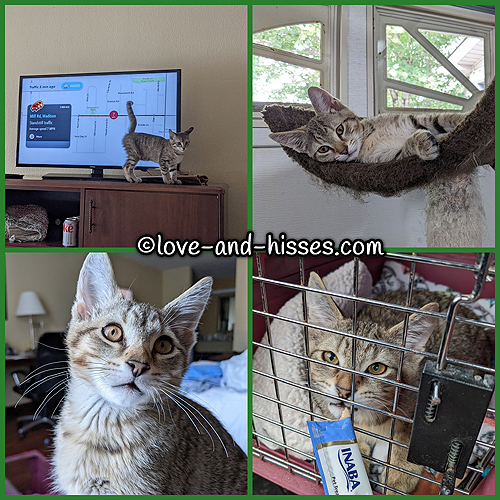 Clover would like y’all to know that sitting around a hotel room is boring as can be. (If you missed it, we were having work done on the house that necessitated us being OUT of the house while they were working, so we spent our nights at a hotel 10 minutes from home.)⁠
⁠
We spent the days at home, in the garage (where we temporarily relocated Fred’s office), and our afternoons/evenings at the hotel being bored. This meant that Clover had to ride in the carrier twice a day, and he handled it really well – he handled it even better when there were treats involved.⁠
⁠
They finished up the work on the house late last night, and so we are back at home in a very dusty house (I’ve been cleaning like crazy.) Clover will be with us for another week (he’s adoption pending, and his adopters are currently out of town), and he’s got the run of the house all the time now. He’s still trying to make friends with Uncle Archie, who is not interested, but Clover’s not taking that personally. ⁠
⁠
The permanent residents spent the week on the screened porch. They didn’t love it (Newt wanted very much to speak to my manager), but they handled it okay. They’re definitely glad that life is back to normal! 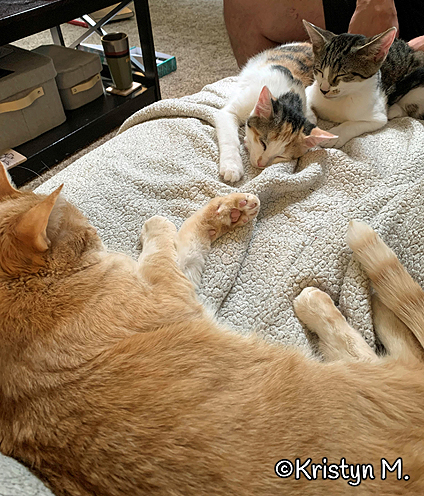 Update! Kristyn reports: “Every day Stompers and the kittens get closer to being friends!”⁠
⁠
I LOVE how relaxed they all look! (Thanks, Kristyn!!) 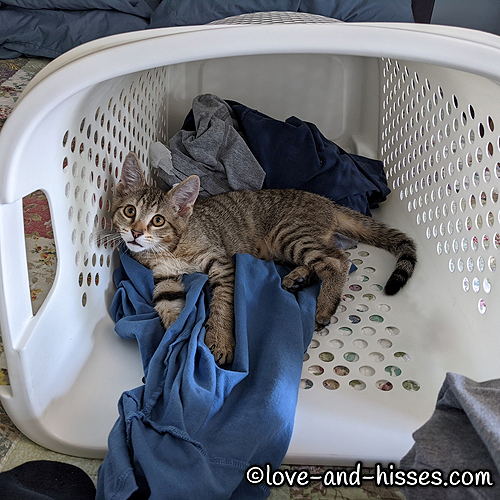 Clover’s the best little laundry helper ever (except for the part where he gets distracted and chases his tail instead of folding clothes. But he’ll learn!) 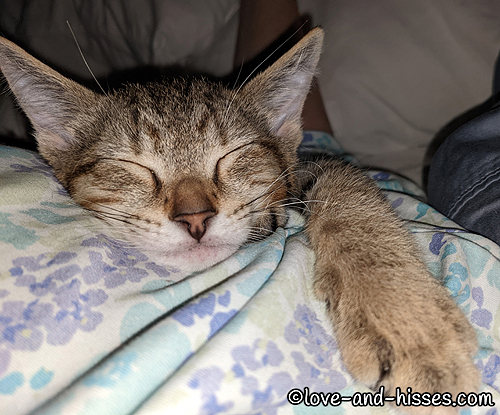 Good night innernets. (Clover has turned into the snuggliest snugglebug who ever snuggled.)