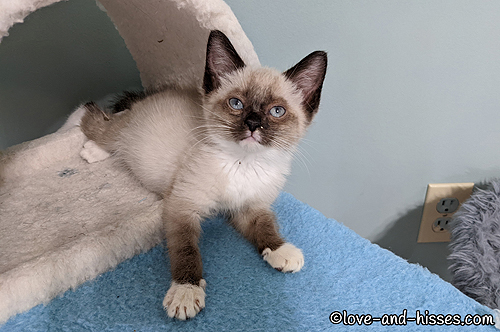 Fergus is a sassy little thing. 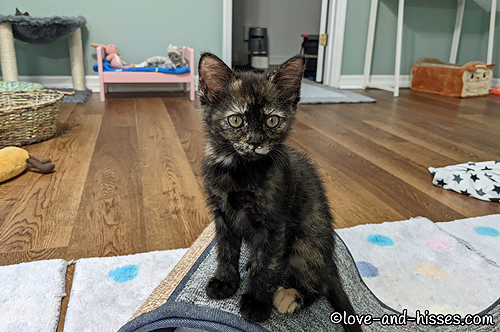 Have I pointed out Jenny’s orange foot? I know you’ve noticed her eyebrows and mustache. (Also, the gray ears sticking up from the hammock in the upper left corner of the picture is Lord John Grey.) 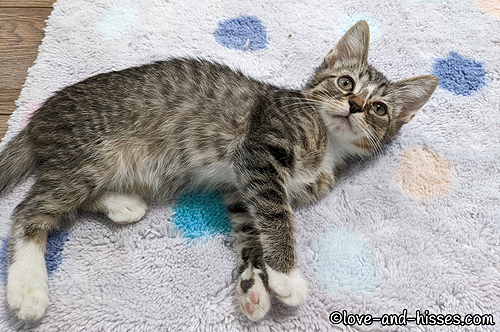 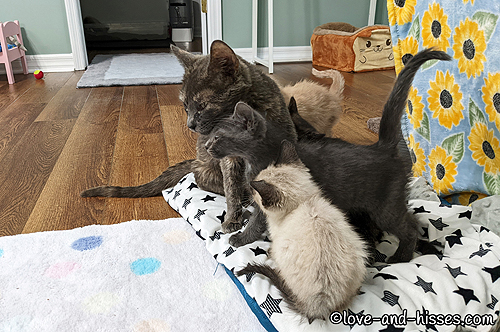 Lord John Grey loves his mama (with Ian looking on. Also, Jamie’s on the other side rubbing against Jocasta. These boys love their mama.) 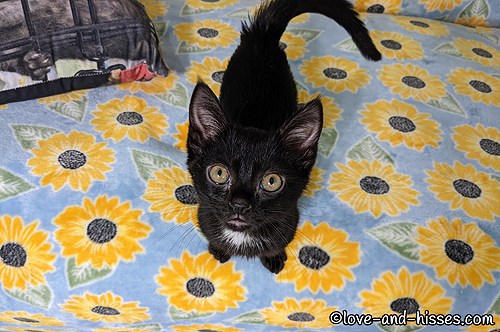 Lizzie’s all “You gonna sit down? It’s time to snuggle!” She’s the boss of me. 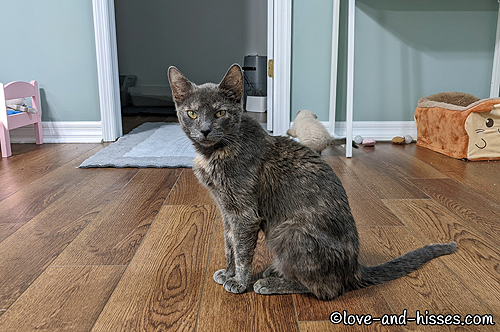 Jocasta’s eyes are looking SO much better – still a bit goopy, but much better. She’s also not sneezing as much – I think we might be about on the other side of this upper respiratory issue. 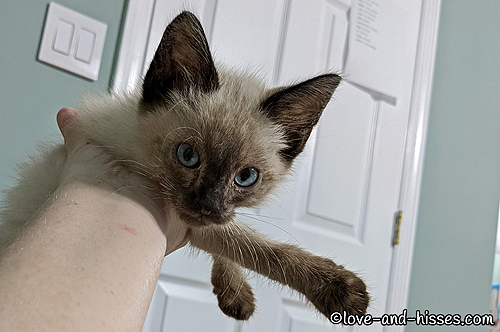 It turns out Ian’s going to be the one from this litter who’s the hardest to get pictures of. He’s either off racing around, or rubbing against my legs. He doesn’t sit still often! 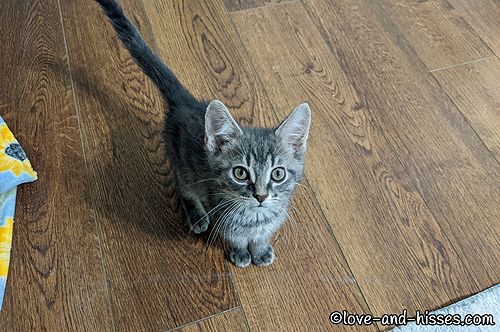 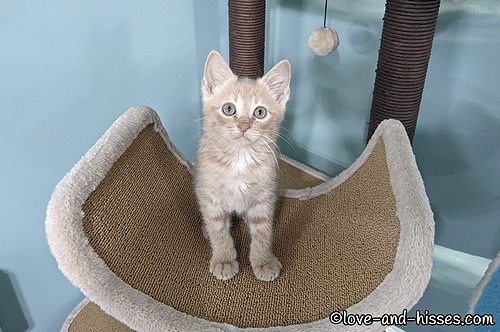 Jamie is just so darn PRETTY. (This whole litter is a pretty bunch.) 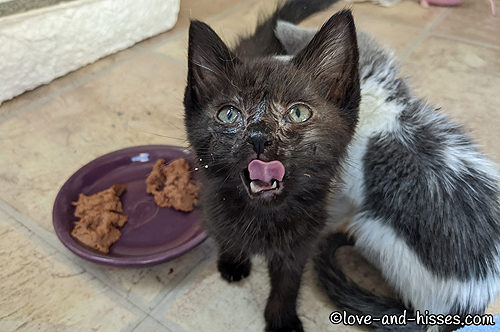 You haven’t seen many pictures of Brianna, I know. When I have kittens who look as awful as she has looked, I tend not to take pictures because I’m too busy staring at and worrying about them. She’s improving, though – yesterday morning I was beyond thrilled to weigh her and find that she is now OVER 1 pound (435 g). When I got her, she weighed 12.3 oz (348.7 g), and then dipped down to 11.8 oz (334.5 g). When she decided she wanted to eat, she was serious about it and it’s nice to see the weight gain – she looks so much better (maybe I’ll remember to take a few pictures of her as proof!) and I even saw her play momentarily yesterday. I am very pleased with her progress. 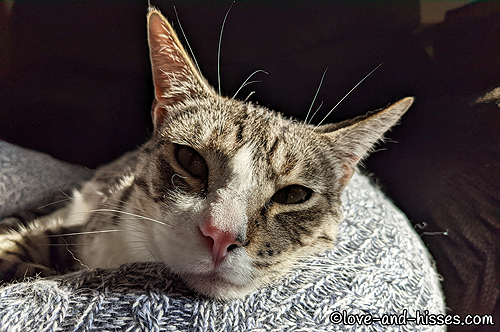 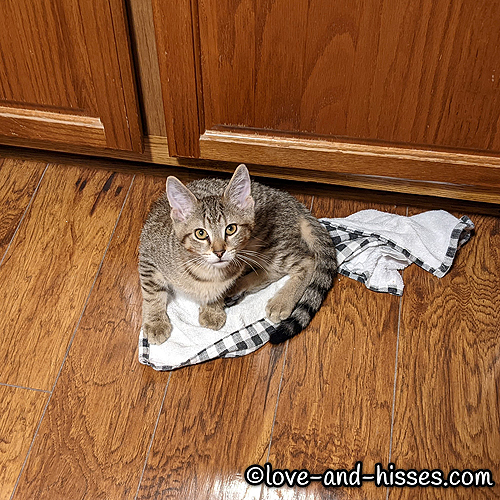 Looks like Clover’s taken some instruction from Uncle Archie. (Our permanent resident Archie is a killer of dish towels.)⁠
⁠
To answer the questions: Clover has not met the new fosters and won’t meet them. They’ve got some upper respiratory stuff going on, and I don’t want to expose him to that. He has had zero reaction at all to being shut out of the foster room, and is out in the rest of the house alongside the permanent residents and the humans. Some nights he sleeps with me; some nights he’s got more important things to do. He’s having a good time, to say the least.⁠
⁠
Clover will not be becoming a permanent resident – he is ADOPTION PENDING, as I have mentioned approximately 748 times. He’ll go home when his people are back in town (early next week), and judging by how he’s handled the chaos of last week, I think he’s going to adapt just fine. 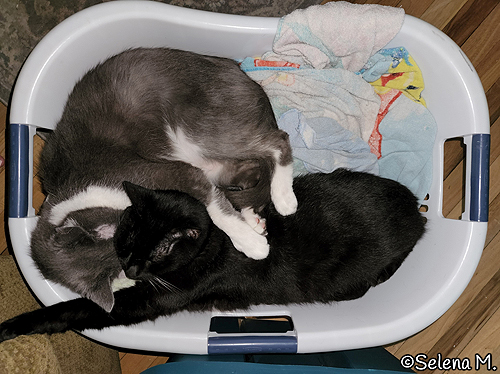 Look at these two sweet boys! That’s gray and white Hook (formerly known as Puff, 2013) and Flynn (formerly known as Kohle, 2012.) Selena says: “Just in case anyone wonders if they still love each other. 9 years later and they are still BFFs. And yes. They are sleeping in a laundry basket with my clean towels. Guess they get to be washed again.”⁠
⁠
(Thanks, Selena!)

YouTube link
Mama Jocasta lets the Paw of NOPE do the talking to Jamie. (Also, sweet Lizzie is in my lap being adorable.) 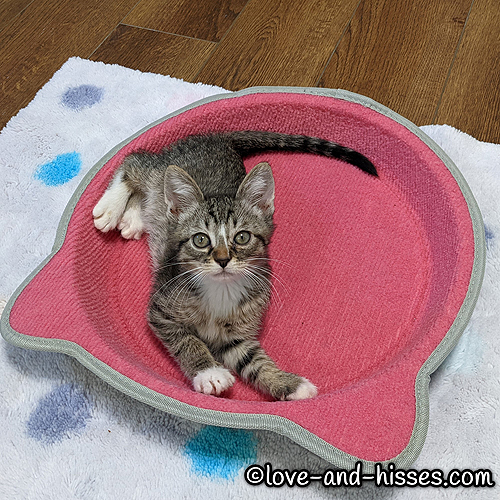 YouTube link
I barely even had to pose the question before Ian was all “ME! I AM! I’M DA BAYBEE! IT’S ME!” 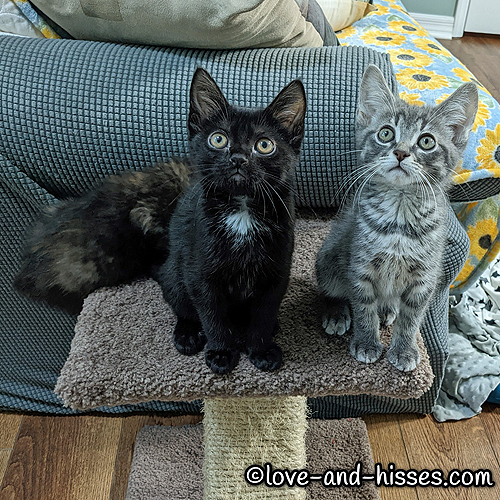 Lizzie and Angus (and Jenny behind them) would like to know just what I think I’m doing. Judging by these kittens, I am endlessly fascinating. 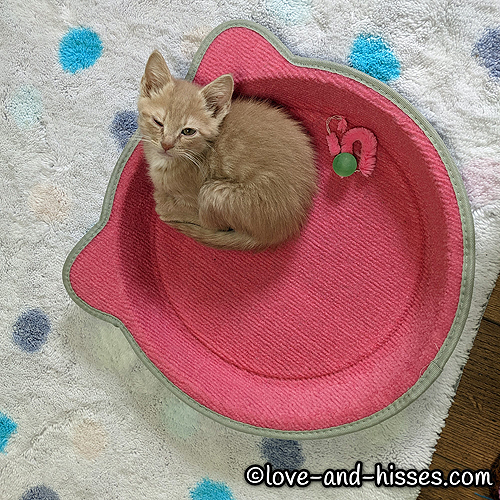