From Jess in Bedford, Texas:

I found a stray calico cat a couple months back and brought her home, unknowingly she was pregnant. I found out too late for a procedure and have hand raised the kittens in an attempt to get them into a better home.

They’ve been raised with my two sons, so they are kid friendly little ragdolls who are snuggly and able to be handled by anyone. I just can’t find homes for them. I am also losing my house at the end of the summer (Landlord is selling, there’s nothing I can do about it) and so I am facing having to take them to the shelter which scares me because I don’t want them put down.

I live in a Suburb of Ft Worth Tx and I was hoping that you could ask your readers if anyone was looking for a kitten.

I’m in Bedford Tx but I’d be willing to drive 20-30 miles anywhere to get these guys a home.

They were born on april 20th so they are nearly two months old. The mom is in the final weaning stages. I also have people who are willing to spay them for free if that would help (we’ll have to get them to Irving for that to happen but I’m willing to help there as well).

I’ve tried freecycle, no kill shelters and even the people who work with petsmart but everyone is full here and I just feel sick about the thought of taking healthy friendly kittens to the shelter.

Edited to add: HOLY COW, THEY’VE BEEN ADOPTED! AND they’re all going to the same home! That was fast! Thank you, Grace, who passed the message along to Angie, who’s adopting them.

I love the internet. 🙂 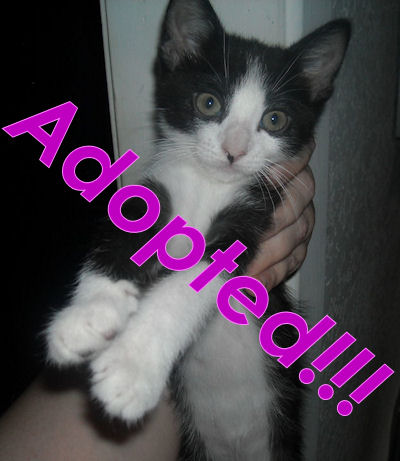 George is a female.
George is my fearless wanderer..
she’s the first out of the box and into the new areas of the house. 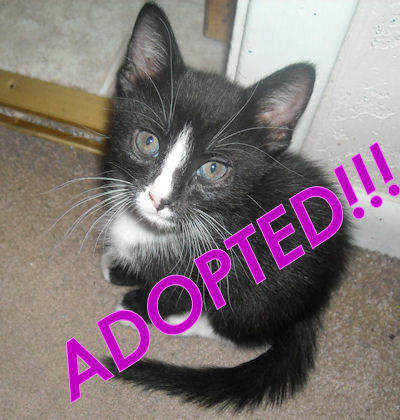 Snip is a male.
Snip is more quiet and laid back than the others..
but he likes to be held and petted when things are calm.

Ollie is a male.
He’s the biggest, and he’s the most gentle..my eldest son wraps him up in his
linus blanket and carries him around like a baby and Ollie loves it. Ollie
just adores being played with. He’ll hang around my son and drape
himself across his lap for attention so I just let them play…so long
as Ollie doesn’t act like he minds I figure that they are doing fine.

If you or someone you know is in the Bedford/ Fort Worth, Texas area and are interested in adopted one (or two…or all three?) of these sweet kittens, please let me know ( mizrobyn AT gmail DOT com) and I’ll pass your email along to Jess.

Remember the feral family of bobtails SNAP needed funding for so that they could spay/ neuter and relocate them?

I wanted to give everyone a quick update on the Grant bobtails. They have all been trapped, treated, fixed and gone to their new barns! There were 5 girls and 2 boys so you can imagine the kittens we saved in the long run! Thanks so much to all of you!!!!!

How amazing is that?! Thank you so much to everyone who donated, who spread the word, and who sent good thoughts for these cats. Because of you there are 5 girl kitties who won’t be bringing more kittens into the world!

By the side door lives a container of cheap cat food. I keep it there to refill the food bowl on the side stoop which feeds the occasional stray who comes around (okay, and Maxi and Newt partake as well, occasionally). The Bookworms are OBSESSED with this container, and every time they hear me getting a scoop of food to put out there, they come running like a herd of elephants.

Yesterday, Bolitar got to the container while I was in the process of scooping, and without hesitation, well, you’ll see what happened. 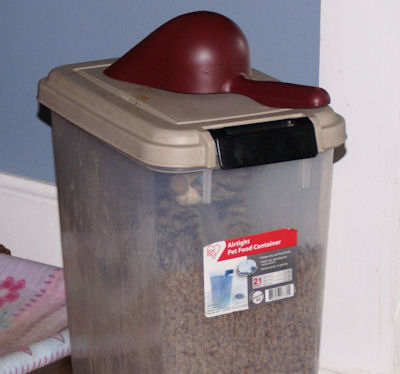 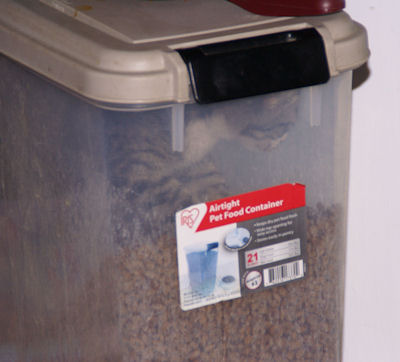 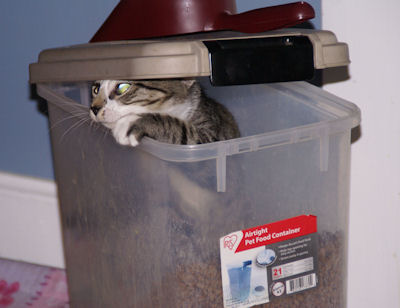 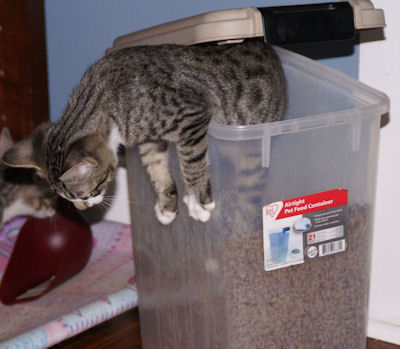 You better believe I make sure that container is latched and locked at all times! 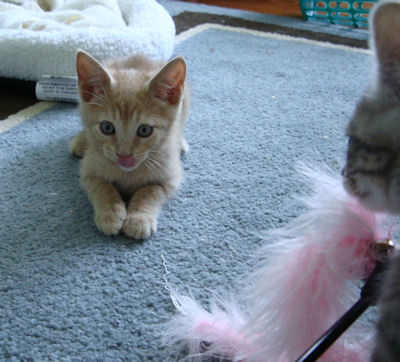 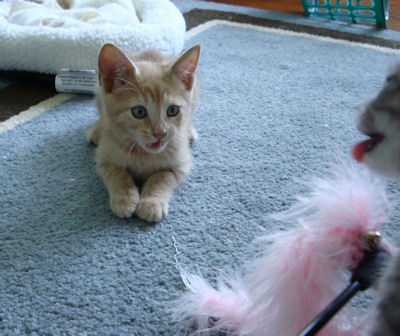 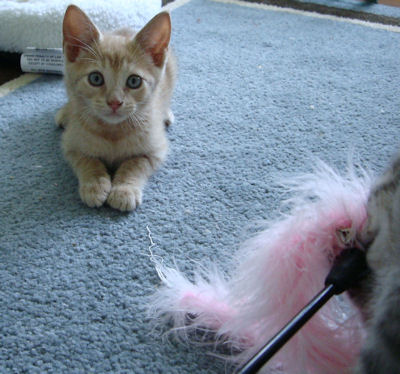 I’m always trying to get a good picture to show the size difference between Jake and Elwood. Elwood is HUGE and Jake is pretty small. 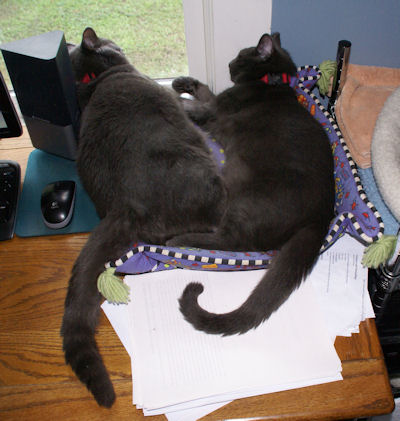 Elwood on the left, Jake on the right.

Last weekend, one of the other cats dug up a mole in the back yard (Fred said last night “I feel like moles are the bane of my existence!”) and then Elwood took it away from whoever caught it (or whoever caught it got bored and abandoned it, is the more likely scenario) and was playing with it. Jake decided HE wanted the mole, but Elwood wouldn’t give it up.

This was Jake’s solution. 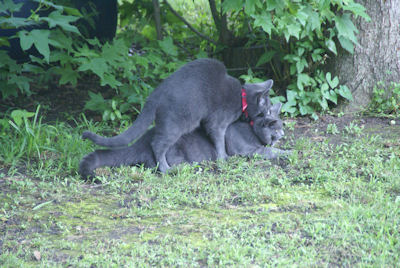 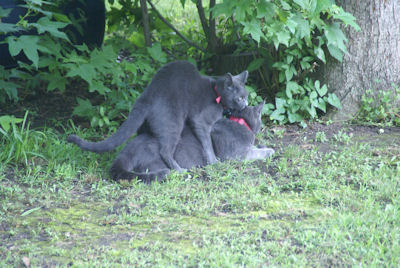 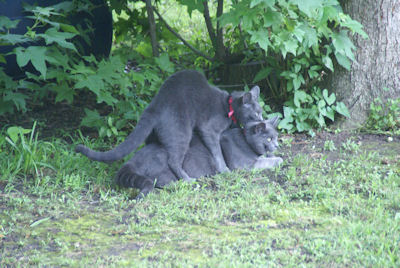 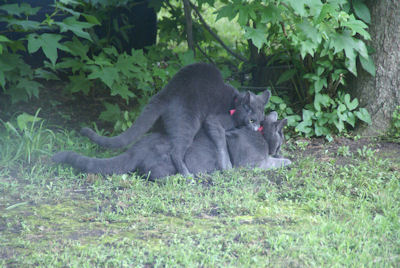 “I will stand here and bite your neck until you give me the mole!”
“Fine by me! I’m not giving it up!” 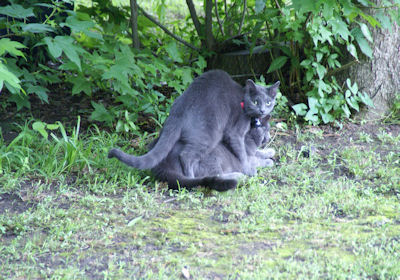 “Mooooom! Elwood’s got a mole and he won’t SHARE!”

(Eventually they both got bored and wandered off without the mole.)