I’ve had a few questions about whether some of these kittens have extra toes or bobtails – they’ve all got the regulation number of toes, and regular-length tails. No extra toes, no bobtails in this bunch! 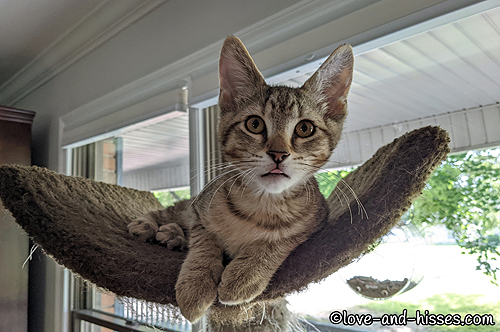 Clover’s favorite place to hang out and sleep (when he’s not racing around or snuggling with me) is the top of the big cat tree. 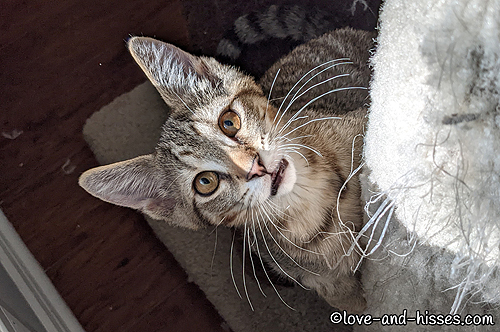 The bottom of the big cat tree is okay, too. 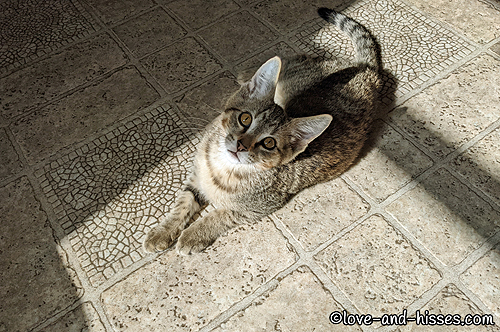 And of course there’s downstairs bathroom, where he can cool his belly on a hot Alabama day. 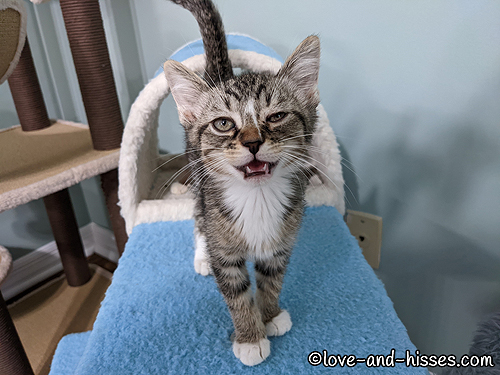 Marsali is very pleased with herself. 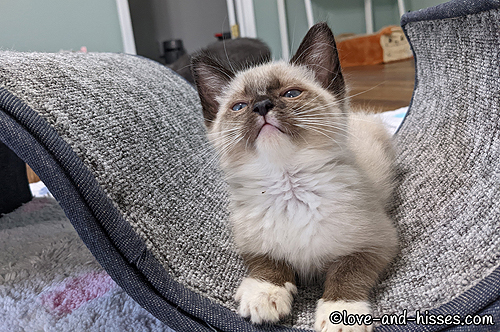 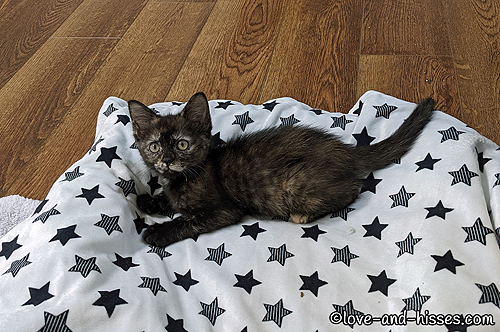 Jenny rests for a moment before she goes racing wildly across the room. (Jenny is the MOST cheerful kitten ever, I swear.) 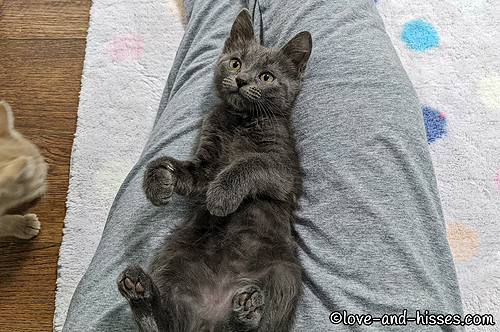 Lord John Grey in my lap, with Jamie approaching. 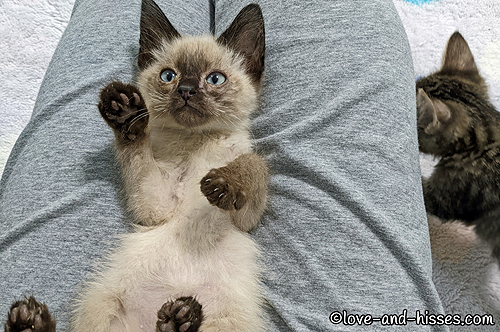 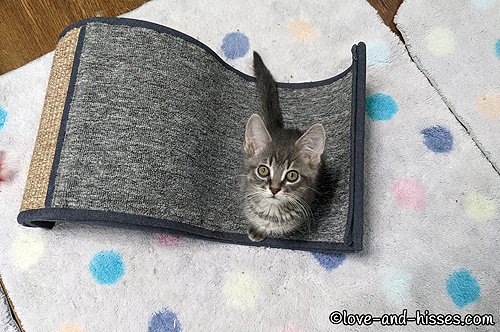 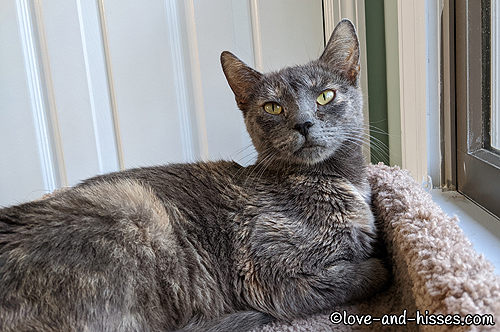 Just like mamas before her, Jocasta loves to sit and look out into the back yard. 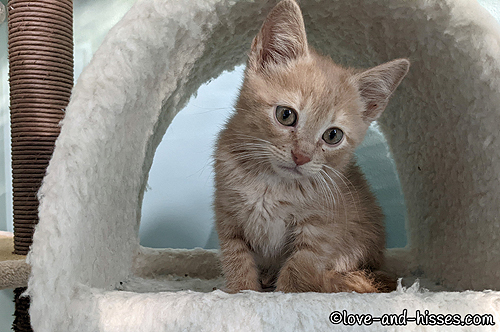 Jamie has a think. 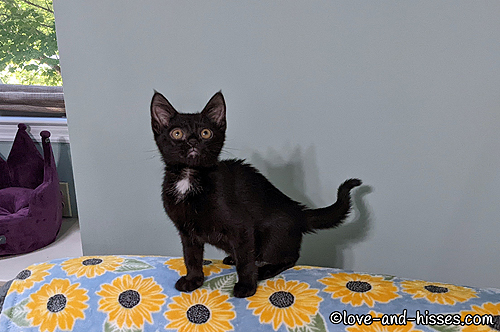 Lizzie’s face KILLS ME. (There was a feather teaser up there.) 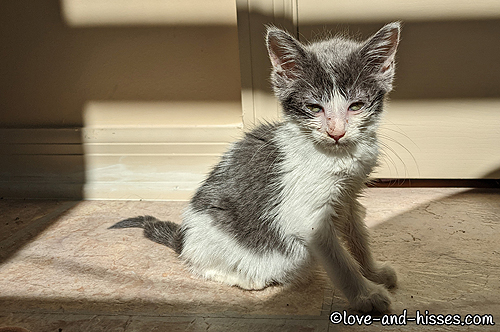 Breanna is continuing to improve. I walked into the bathroom yesterday to find her in the litter box, chasing her tail! She’s so much more interested in the world around her than she has been. I’m giving it one more day, and will move her and Roger into the foster room tomorrow. 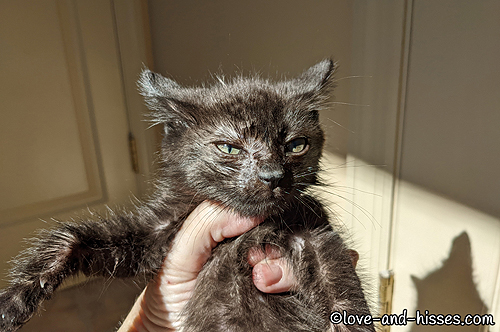 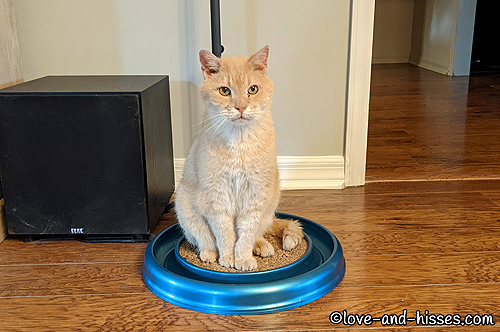 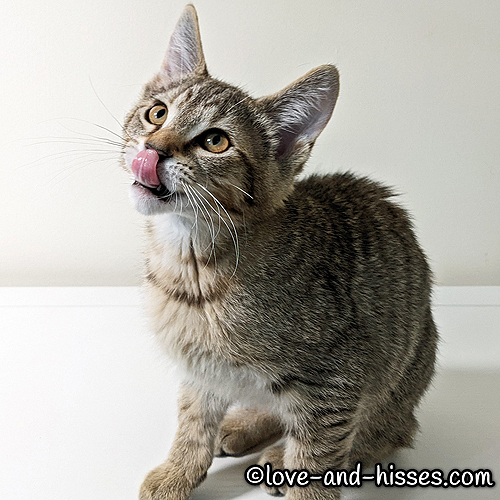 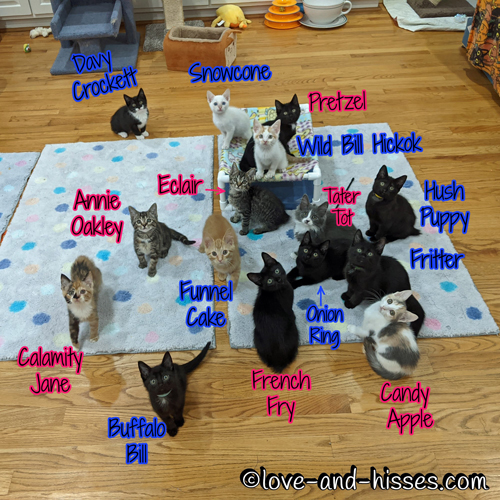 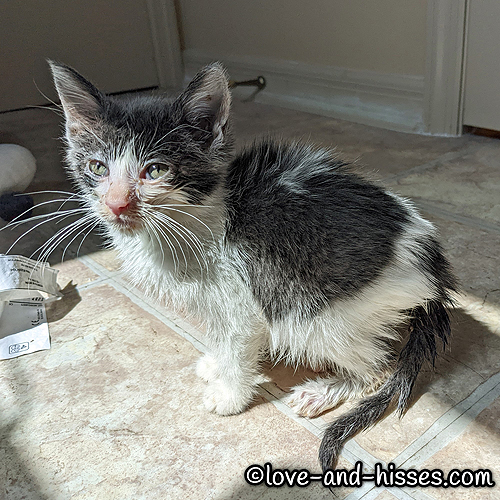 Brianna update: she is doing GREAT! She’s gaining weight, eating on her own (and eating very well!) and she’s starting to be curious about the world around her. She’s even played a little bit! I’ll keep her in the bathroom with Roger for a few more days, and assuming she continues to do so well, I’ll move them both into the foster room. This is the first time I’ve been able to actually see the color of her pretty eyes (her eyes were so swollen and goopy before now).⁠
⁠
Roger is doing great, too (but he’s been doing really well). His eyes are a bit goopy, but he’s otherwise perfectly healthy, active and happy.

YouTube link
Throw Back Thursday: in 2020, when we had 15 kittens in the foster room, I had to scrub down the room nearly every day because they had ringworm and I didn’t want it to spread. I was able to vacuum and wipe down the room with the kittens in there, but couldn’t mop with them running around – I didn’t want them to run through the cleaner I was using on the floor. So I’d put them in a very large crate, mop, and then set them free. Of course I had to make videos of them coming out of the crate.

I love how they come trotting out of the crate with their tails straight up in the air. (Those who HAVE tails, that is.) 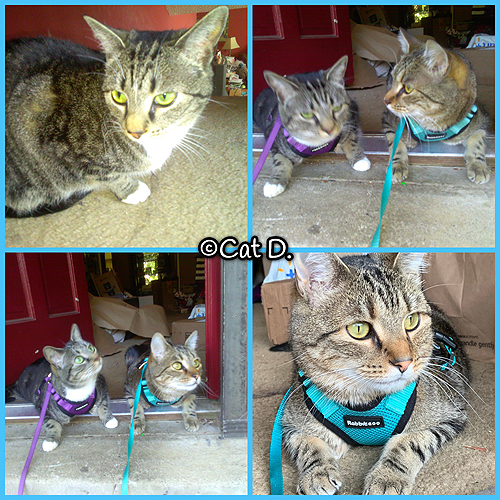 In 2020 we fostered a litter kittens known as the Mewsketeers, which included Constance (now Oleander/Ollie) and Rochefort (now Rhus)! Today’s their birthday, and look how beautiful they are!

oleander and rhus continue to be the light of the house.

recently oleander has taken to slapping the doorknob when she wants to go out on the porch in her harness, and when rhus hears her doing it he jogs over to the door to join her in waiting for me to come and put harnesses on them to go on the porch.

rhus is an excelent little hunter,and this time of year dad is in and out of the house alot so flys and moskitos get in somtimes. but never fear rhusy is here! he will catch those buggys and have a ball doing it.

speaking of balls, there continues to be sparkleballs all over the house, i frequently find them in my bed,the laundry,my purse,and my shoes,and one ended up on a bussness trip with dady. so the muffins clearly were making sure he packed the important things for his trip.

they have also taken to unpacking our amazon deliversy for us, they are very helpful by taking the things out of the bag and crawling inside them instead! (evidance of this is behind them in this photo)

we love them bunches and dont know how we ever did anythign without them ! 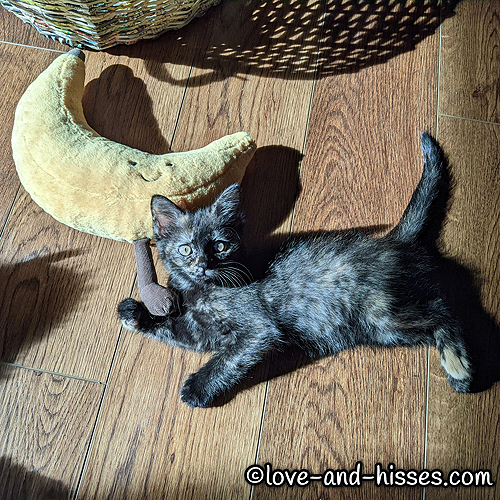 A girl (Jenny) and her banana, hanging out in the sunshine. 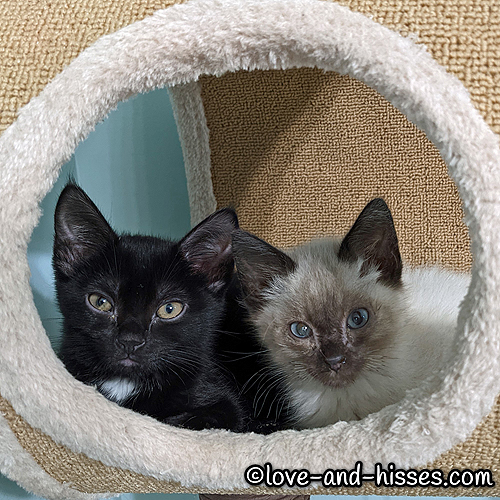