Bramble and Hollyhock, and Kudzu and Mondo went home on Saturday! Bramble and Hollyhock went to the Atlanta area to join new big brother Stompers, and Kudzu and Mondo went to Nashville to be the lords of their castle (but they are cousins to Charles and Caroline’s kittens Willie and Albert, and there may be a play date in their future once they’ve acclimated to their new home. They’ll also pop up on Albert and Willie’s Instagram from time to time!) All kittens are keeping their names.

Clover, of course, is still here with us. He’s adoption pending, but his family is out of town, so he’ll go home around June 20th to join new big brother Leo (former foster Athos.) Until then, he seems to really enjoy having the one-on-one time with me.

As mentioned, we’re having work done on the house this week, so we’re checking into a hotel this afternoon and will be spending a few nights there. Clover will come with us, and the permanent residents will stay on the screened porch (which is where they spend the vast majority of their time anyway.) Fred will return to the house to work each day (we moved his office into the garage.) We will ALL be very glad to have this week behind us!

So there’ll be no more blog posts this week, and though I MIGHT occasionally post on social media, posts there will most likely be few and far between.

Keep your fingers crossed that all goes well and, hey, maybe they’ll get done sooner than expected! (A girl can dream, right?)

Here are the rest of the pictures I took of the kittens before they were adopted. 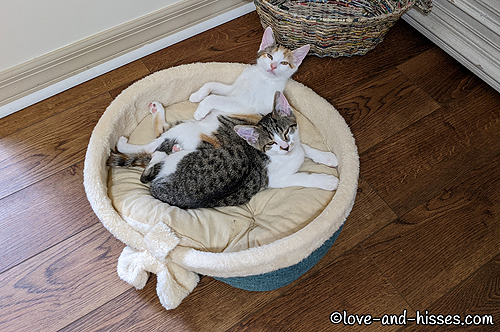 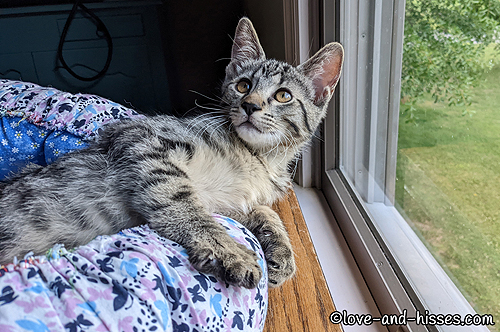 Mondo’s all “There are birds out there!” 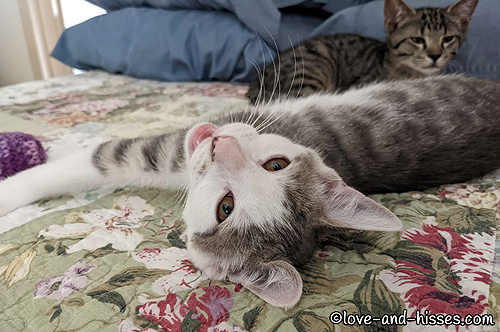 Kudzu has an opinion. 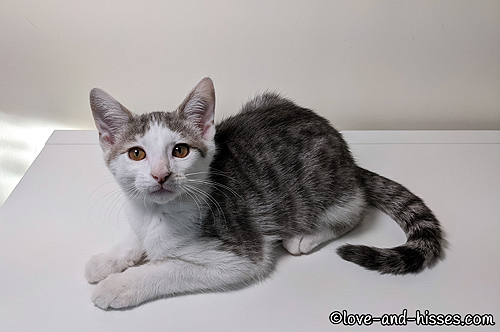 Kudzu is just such a pretty boy. 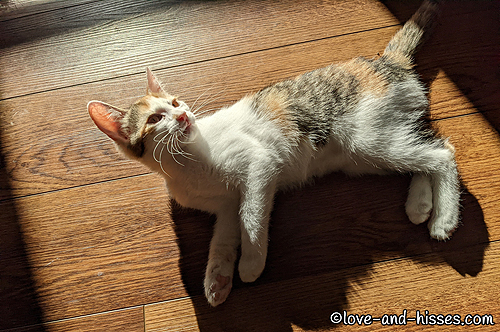 Hollyhock in the sun. 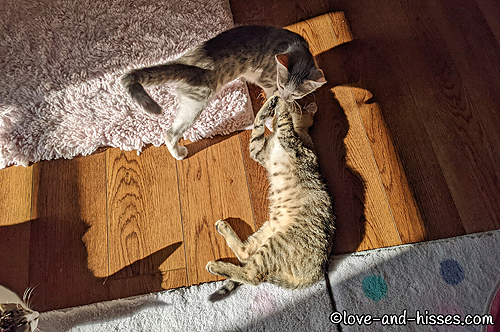 Kudzu and Clover have a tussle, with Bramble looking on. 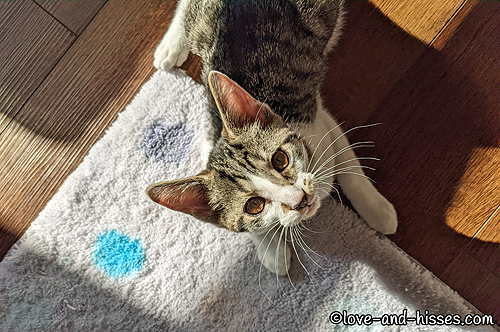 Bramble shows off his beautiful eyes. Oh, and those whiskers! 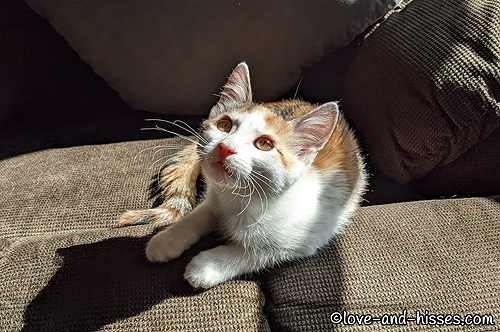 Hollyhock in the sun again. I love how her eyes match her orange fur. 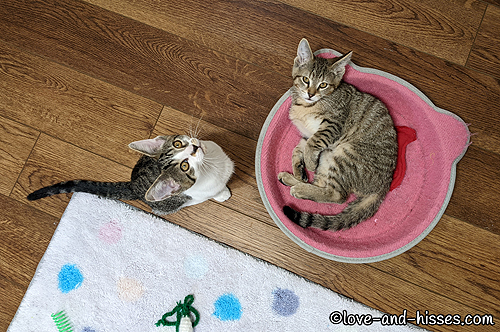 Clover pie! (And Bramble staring off into space.) 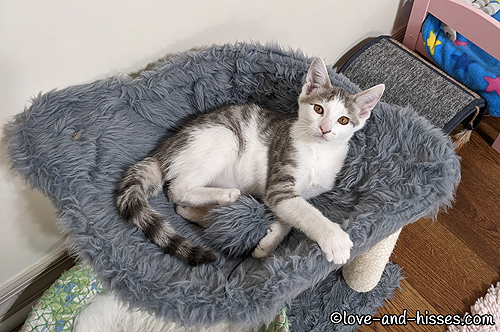 Everyone else was racing around, but Kudzu was just like “No, I’ll hang out here in the hammock, thanks.” 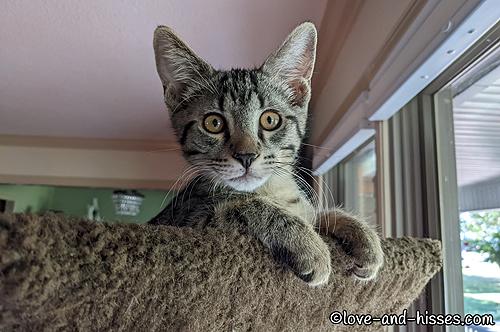 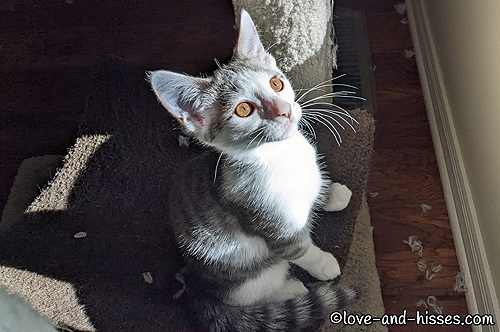 Another shot of Kudzu’s striking eyes. 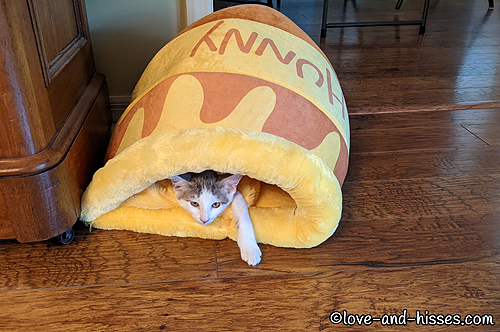 They discovered this bed/cave and Kudzu really liked it. (Hollyhock and Bramble both snoozed in it for a while, too.) 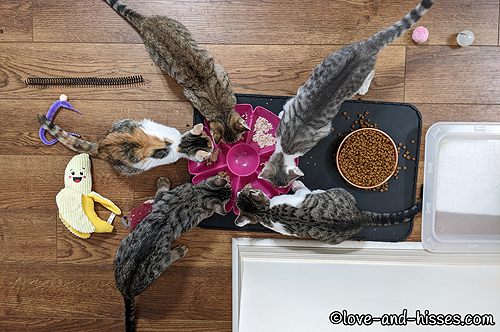 One last breakfast (please note that they’re all eating from separate compartments!) 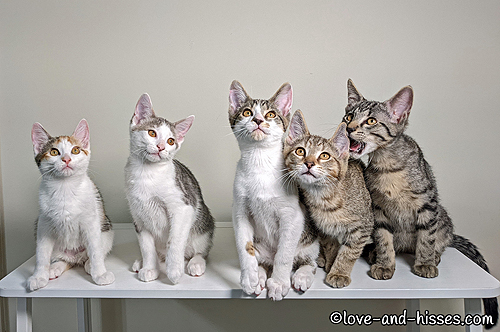 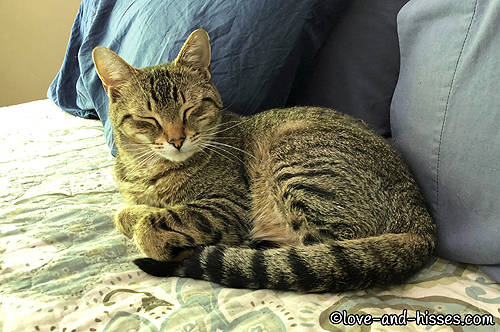 An old picture of Dewey, so y’all don’t forget what a pretty boy he is. (For newer readers: Dewey doesn’t like to have his picture taken, and after many frustrating attempts to take his picture, I finally decided to stop trying.)

YouTube link
Mondo and Clover have complaints. It’s a very complain-y start to the day, if you hadn’t noticed.

YouTube link
I was trying to make a video of Mondo purring (so I could use it as the soundtrack for the videos of the kittens as they go home this weekend), but Bramble had somethin’ to say. (I wasn’t petting him enough.)

(He was purring, but the loudest purr was coming from Mondo, who was sleeping to the left of the camera.)

YouTube link
If you can’t trust your brother to keep your toeses clean, who can you trust? (That’s Mondo, giving Kudzu’s toes the ol’ slurperoo.)

YouTube link
Time for the daily toy toss! I love how Clover is hanging out in the pie plate, doing some cleaning, watching the toys fly by, and then suddenly he HAS to get involved!

YouTube link
Bramble has opinions, and he’s just not shy about sharing them!

YouTube link
I couldn’t get her to talk, Hollyhock was far too busy makin’ biscuits. She is such a SWEET little thing! 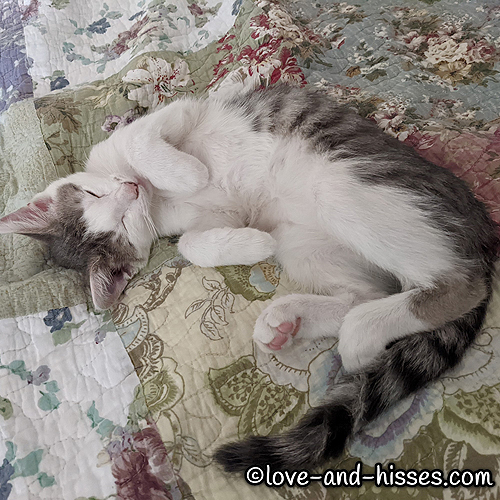 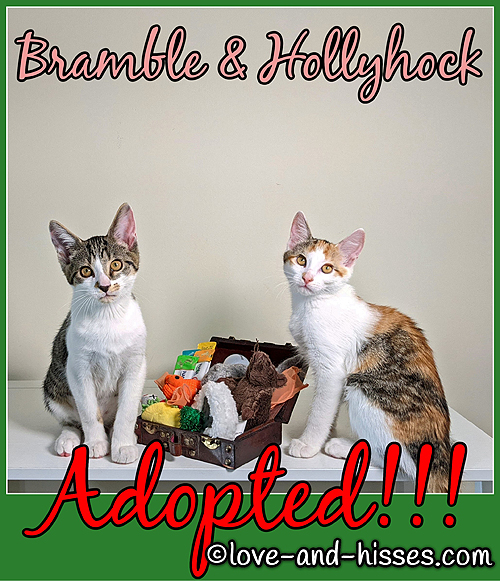 Hooray, hooray, Bramble and Hollyhock were adopted and have gone home today! They’re going to the Atlanta area, and are joining Stompers (who we fostered 10 years ago!) They are keeping their names, and I’ve been promised updates. ⁠
⁠
Happy life, sweet babies! ❤️ ❤️ ❤️ 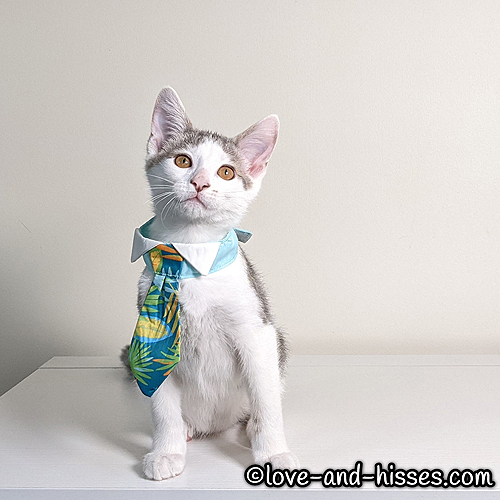 That tie looks good on you, Kudzu. 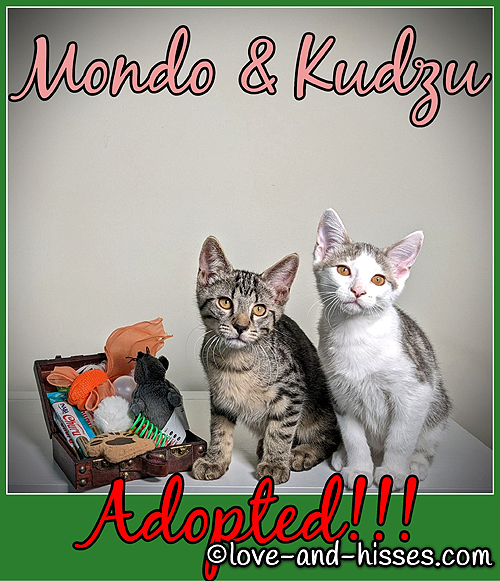 Hooray, hooray, Mondo and Kudzu were adopted today! They are headed home to Nashville, TN right now. They’ll be the only kitties in their new home, BUT (fun fact!) they are going to be cousins to Albert and Willie (Charles and Caroline’s kittens, fostered in 2019)! In fact, they went home in the same crate Albert and Willie used when they were adopted. ⁠
⁠
Happy life, sweet boys! ❤️❤️❤️ 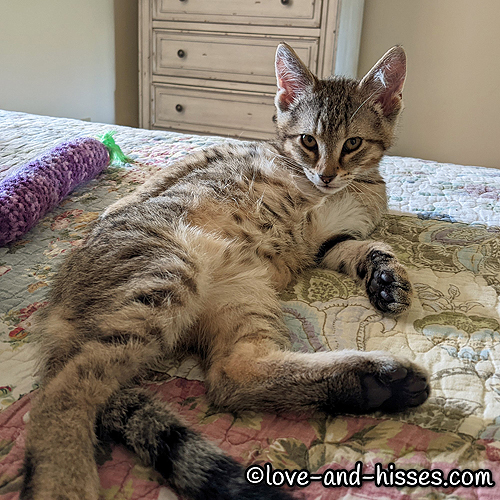 “How YOU doin’?!”⁠
⁠
Clover is doing okay – after his brothers left, he raced around and played like crazy for a few hours, and now he’s napping. He is clearly confused as to where everyone went. He and Uncle Charlie touched noses, and then he watched me clean the foster room. It’ll take him a few days to adjust, but I think he’ll be fine.⁠
⁠
*Note: Clover is adoption pending, but his new family is out of town until mid-June. He’ll be here with us ’til then, out in the house with us and the permanent residents. 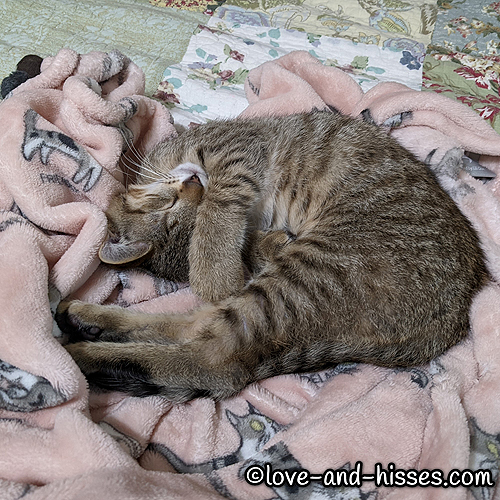 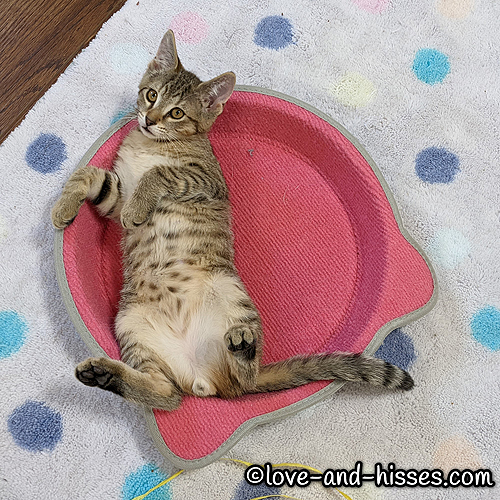 It’s a Clover pie! (My favorite!)⁠
⁠
Clover spent his first night without his siblings sleeping with me. He wandered off at one point in the middle of the night to play (or stare at the permanent residents perhaps; I don’t think he’d realized there were 7 of them until now) and then came back to sleep with me. This morning he played a lot, “discovered” the birds through the window, and is currently napping on the big tree.

YouTube link
Bramble and Hollyhock were adopted (together) yesterday and went home to the Atlanta, GA area. Here they are in pictures from the day of their birth (March 2, 2022) to the day of their adoption (June 4, 2022), backed by a soundtrack of purring kittens.

YouTube link
Mondo and Kudzu were adopted (together) yesterday and went home to Nashville, TN. Here they are in pictures from the day of their birth (March 2, 2022) to the day of their adoption (June 4, 2022), backed by a soundtrack of purring kittens. 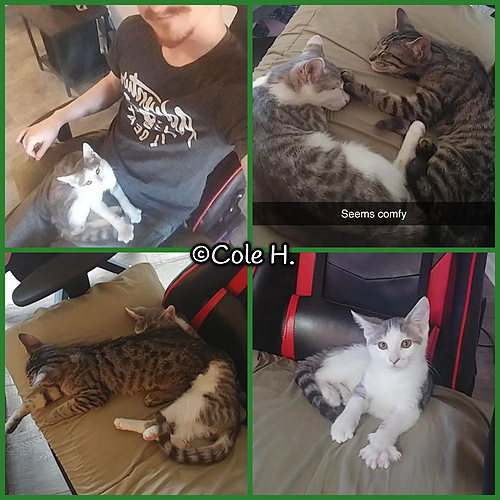 Kudzu and Mondo are settling in! 2 am zoomies, playing in the litter box, Kudzu makin’ biscuits. It’s taking no time at all for those boys to make themselves at home! ❤️

(Thank you to Cole for the pics, and to Mikaela for passing them along! Did I mention that Mondo and Kudzu are cousins to Albert and Willie? Rumor has it they’ll make the occasional appearance on the Albert & Willie Instagram page!)

YouTube link
Remember those weekly collages of the kittens? Here they are in a video (with the purring soundtrack, of course) so you can watch them grow. (And yes, I missed weeks 5 & 8, but that’s the way it goes sometimes.) 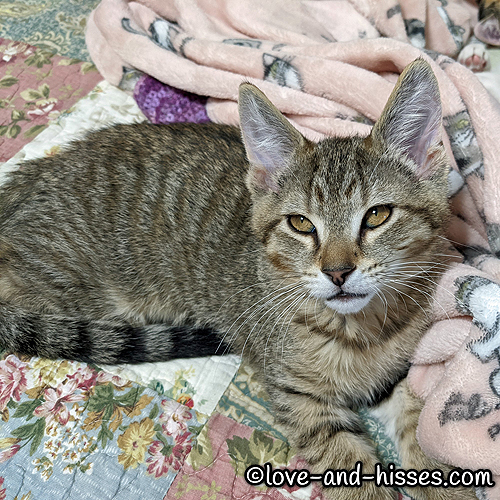