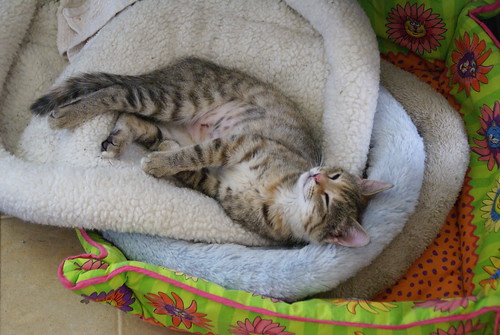 Hangin’ in the pile o’ beds by the back door. 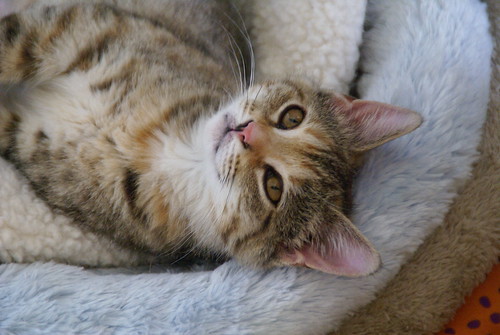 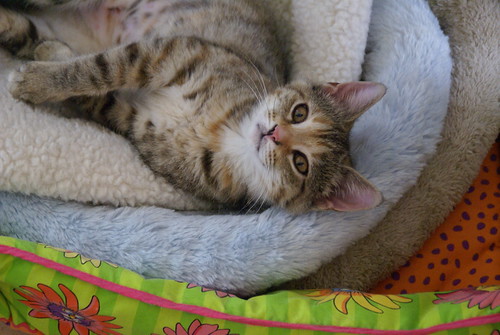 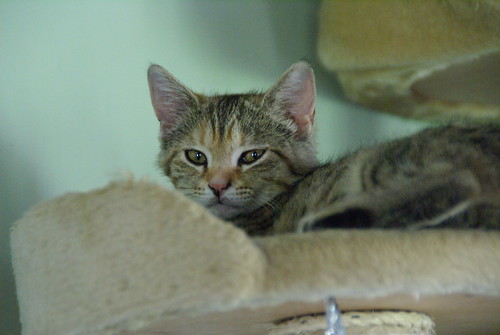 A few minutes before I unceremoniously stuffed her into a carrier. She was suspicious.

Miss Dorfy has gone to her forever home in… (drumroll) St. Louis! Andrea (who comments at Love & Hisses as Luanne) saw Dorothy and fell in love and emailed me to see if it was a possibility. St. Louis is – we were both surprised to discover – six hours or so from Alabama, which is a long drive but not insanely so. We met at the shelter Saturday afternoon, and Dorothy was all “What the what now?” as she met her new Mom, and then when she went into her fancy new carrier she was all “Um, what?”, but she is such a sweet girl that she didn’t howl all the way to St. Louis (which was what I feared), instead she was quiet most of the way and curious about what was going on.

She joins her new brothers Oliver and Teen Baby and her sister Luanne, and I suspect that it won’t be long before they’re all thick as thieves. It was really nice to be able to meet her new Mom (you know I don’t get to meet the adopters very often), and I have no doubt that she’s going to be one happy, spoiled girl! You can see pictures of Dorothy as time goes by over at Facebook or on Flickr. (There’s not a lot at Flickr, but Andrea promises that once things are settled down (she recently moved) she’ll do her best to live up to her New Mom obligations!) 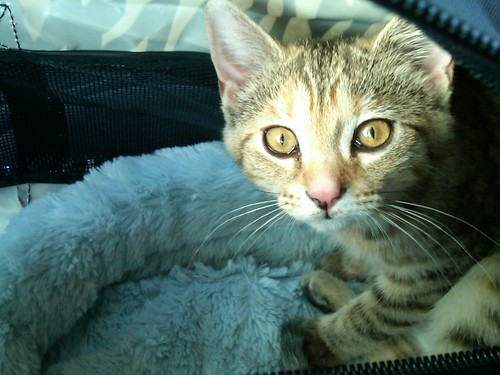 (©andrea) Stopping in Paducah on the way home. 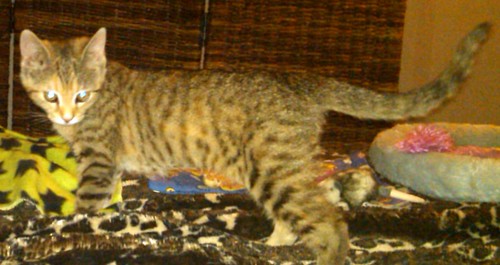 The Spice Girls are doing well. They are three bright-eyed little monkeys, and every time I walk into the room, all three of them rush the door. Then they stop at the barrier (which is there specifically to stop the flow of kittens) and sniff around wildly. Luckily, there are only three of them and they’re small and easy to pick up at the same time.

They kill me with how cute they are! 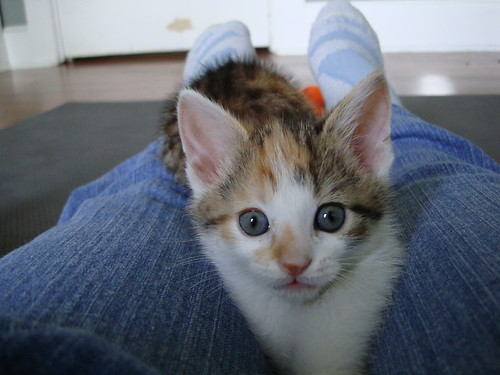 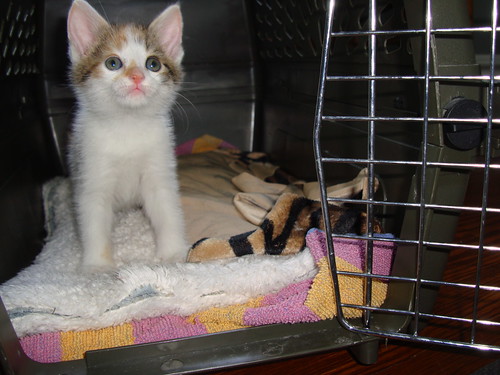 “Welcome to my home! Would you like a tour?” The girls like to sleep in the carrier most of the time – though sometimes they conk out in the middle of the floor. 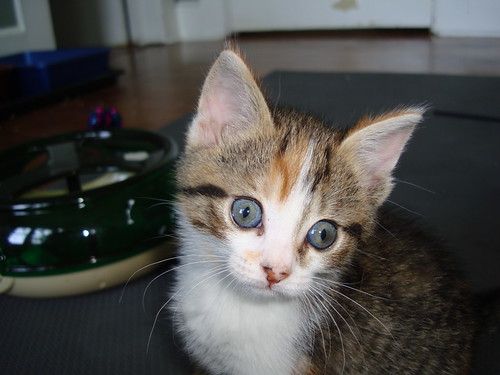 (Cilantro) I find it endlessly fascinating to see the way their eyes change color, from the pupil outward. 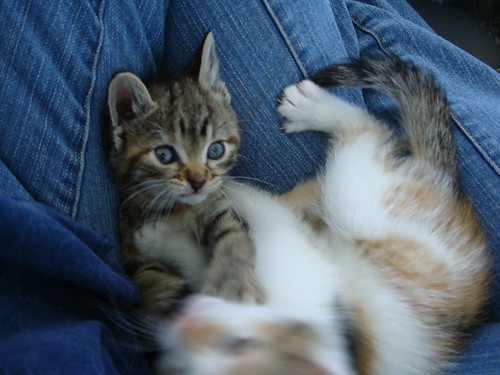 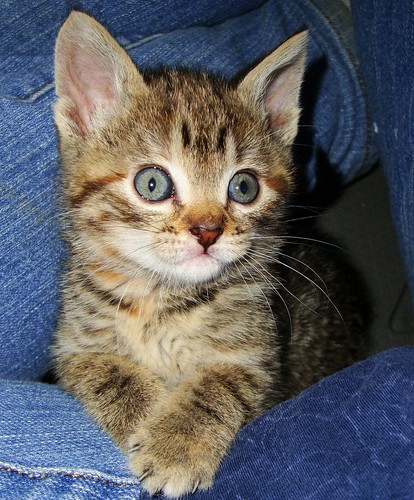 The McMaos got their vaccinations Friday afternoon, and they were sleepy for the rest of the day. 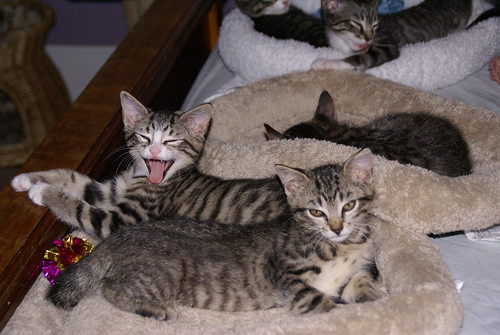 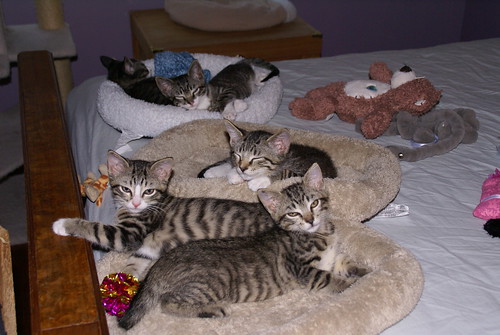 That Fergus Simon, he always gives me such attitude. 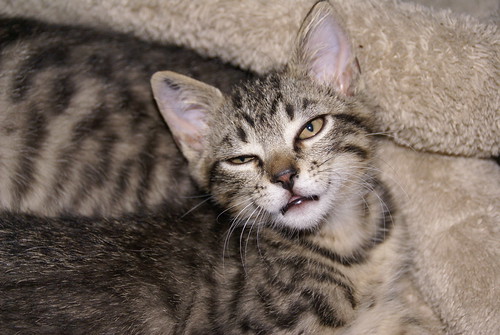 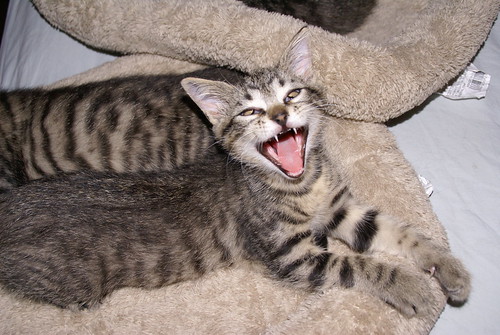 “I said I WILL CLEAN MY ROOM! LEAVE ME ALONE! GOD!” 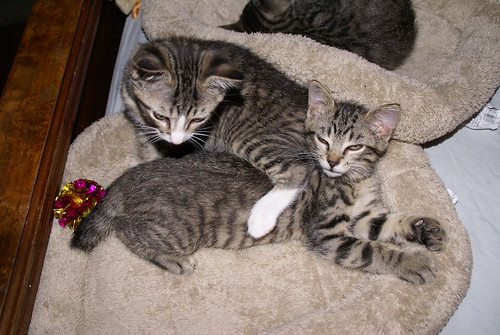 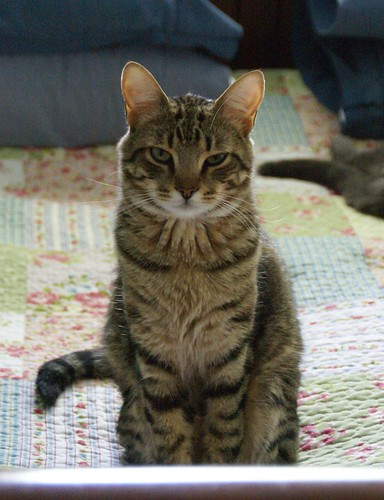 Have I told you how beautiful you are, Corbie McGee?
“Not in the last ten minutes.”
SO beautiful.
“I know.”