Next up, nursing pictures!

And lastly, various pictures of the whole bunch. Every kitten isn’t present in every picture, but they are in lots of them, and every picture has several kittens in it. That is Susie on the left at one month old, and on the right at almost 3 months old. It’s amazing how much they grow in a relatively short period of time, isn’t it?

What the heck, there’s some sort of kitten network going on here. Three kittens from three different shelters fostering together? Will they end up going to their shelters after a month or so? Will they have to go three different clinics for spay/neuter?

No, they all came from different places, but they’re all under the care of Forgotten Felines now – well, I mean they’re under my care at the moment, but they belong to FF and will be going back to them when Brittany gets back.

And what did Newt have to say?

Newt often doesn’t bother to join in on snack time for reasons known only to him. Sometimes he’s right there, but when I was reviewing the food from Chewy this month, he wanted nothin’ to do with it. You’d never know that he’s a picky eater, but apparently he is!

I have a few questions about the snake incident. How did he get in by himself with it? If you have a “doggie door”,aren’t you afraid of other critters coming in-like skunks, possums or raccoons? And, why do you have a surveillance camera in your kitchen?

We have a cat door leading to the back yard, which is fenced in. Possums, skunks and raccoons don’t come into the back yard – and we close the back door at night, so nighttime critters couldn’t come inside even if they wanted to. The only other critters who’ve come inside are brought by cats (Stefan and Kara are the worst offenders) and are usually birds, mice, and moles. The was the first (and last, please) snake.

The camera in the kitchen is to catch any activity going on – we used to have a problem with cats who sprayed, and needed to know who was doing it. That’s not as much an issue any more, but we leave the camera there just because I like having it there. We have a camera in the front room and one in the foster room, as well.

That chef’s hat on Susie is the best thing EVER! Where did you get that? Stefan has also sported that hat, FYI. As did Tony Soprano! Question: There’s “tabby,” “toritie,” “torbie,” “calico,” “tuxedo,” plus the basic white/black/grey/orange cats. What’s the term for cats like Chanandler Bong, Ken Adams, Art Vandelay, and Susie: mostly white, but with patches of grey, black, or darkish tabby, typically with a “raccoon tail.” My cat Eddy has similar markings, including an ineffective camouflage patch on the inside of his leg. I like to say his coat was made up of bits leftover from other cats. Thoughts?

Pic of Eddy’s Moment of Glory (in the I Can Has Cheeseburger Calendar): 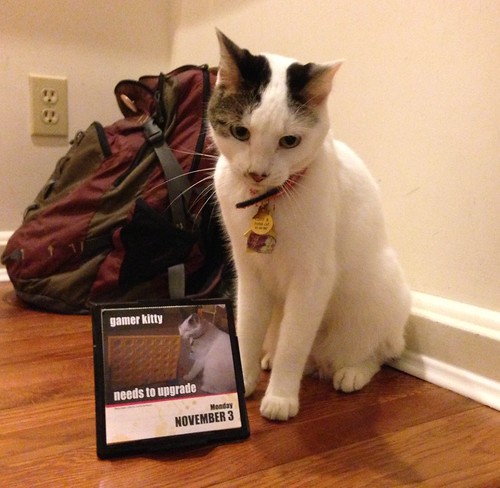 Especially cute pic of Eddy and his girl (he’s five months older than she is; they both turn 12 this year): 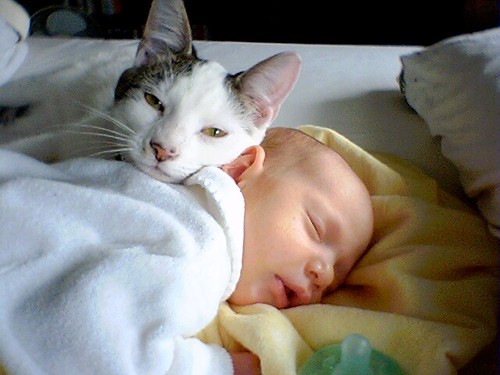 First of all: OH GOOD LORD is that an adorable picture. I LOVE IT when kitties and kids get to grow up together – one of the things I love about Periwinkle and Patches (fmr Bert and Art)’s new home is that they get their very own little girl to grow up with.

I would call Chanandler a cow kitty (because her markings are similar to those of a Holstein cow), and the rest, I would refer to as tuxies. I don’t know that Susie would be considered a true tuxie – maybe she’s more of a cow kitty, too? – but that’s what I called her.

I’d love to hear input on this topic, y’all! She looks like she’s spoken her piece and counted to three, doesn’t she? “Not sure about this whole being up on the bed, lady. But I’ll pose! You want a pose, here ya go. Now put me back on the floor!” “This bed smell fabulous, lady. And it’s just my color!” I don’t know – the door to the room was open, but they went back into the playpen to hang out. Sometimes you’ve got to return to home base, I guess. “Behind you, lady! An armed intruder! Or nothing at all! We’ll see!” I have a Loopy case on my phone (and I love it), and these kittens think the loop is just the MOST FUN TOY EVER. They’re forever smacking at it or biting it. Squeek and her Precious Moments eyes.