Did you notice that in the cat tree pic, one little monkey is in mid-air?!?!? LOL

Indeed I did! That’s Fergus Simon, and that describes his personality completely – he’s always flying through the air like a wild thing. Nothing slows this boy down. 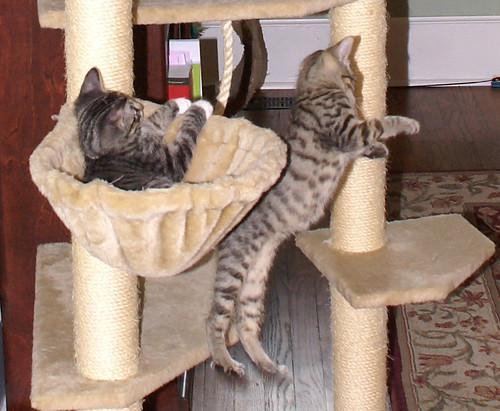 I keep on thinking that Coriander is actually Alice!! They have quite similar, gorgeous coloring, and are both small! 🙂

It’s my goal in the next week to get a picture of Cori and Alice side by side, so y’all can compare. They do have the same colors, but Alice is not nearly the tiny thing she used to be – in fact, I’d say she’s pretty much an average-sized cat now.

Reminds me of a story here where a woman was arrested at a casino when someone found about 35 animals (cats, dogs, and kittens) in her CAR in the parking garage. She’d been kicked out of her apartment (go figure) and was using the casino’s computer to look for new housing. She’d cracked the windows of the car–this was in summer! None of the animals were hurt or harmed or sick from the heat.

As for your (non-hoarded) cats and kittens, Robyn, I swear they get cuter everyday… or maybe that’s just the hats! I swear that Alice has become a full-size cat based on how big the collar power supply is. Is that true?

It really is – I’ll see if I can’t remember to weigh her in the next week so I can see just how big she’s gotten. I had kind of hoped that she’d stay tiny, but I guess she needed to get bigger to fit all that personality in!

I went back looking because I remembered a video of him saying hi. Isn’t it nice to have videos to remember with?

It really is nice to be able to see him again and hear his voice. I actually posted two videos of him – one recent, and one from 9 months ago. I called them both “Coltrane says hi,” as a matter of fact!

By the way, I noticed the traffic noise in the video of the baby robins. Is that “the” road? Sounds like there is quite a lot of traffic.

The road in front of our house is actually busier than you’d expect. It’s the main road leading to one of the area’s biggest employers, so at shift change there’s a lot of traffic. The tree is also very close to the road – here’s a shot from the end of the driveway. That tree near the mailbox is the one with the nest in it. 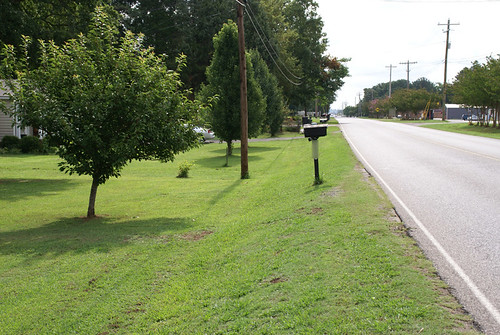 And here’s a shot from the end of the driveway to the house (you can’t see the tree, but you can see the shadow of the tree on the ground). 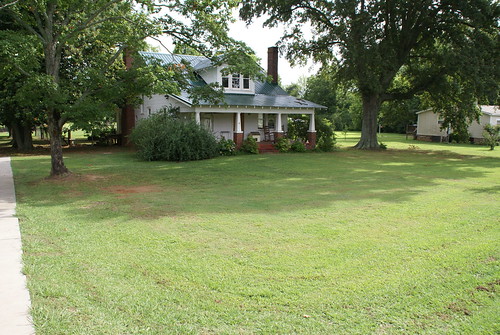 In the meowy Spice Girls video, I can distinctly hear two girls yelling for food, but then there’s one who has a teentiny adorable little squeak! Who is that? I almost melted from the sheer cuteness of whoever was going meep! ee-eep! meep! eep! meep!

Not to be a busybody or anything, but in future years you’ll need a more hefty support for the grapevine. Think about vineyards in France with wooden fence posts and heavy wire supports — the vines get so heavy that they need that strength of support. Hope this helps. Thanks for letting me be a know-it-all.

Doodle, anytime you want to be a know-it-all, I’m listening. 🙂 I don’t know about needing a heftier support for the grapevines, though – we’re growing muscadines on a similar fence, and they seem to be okay. 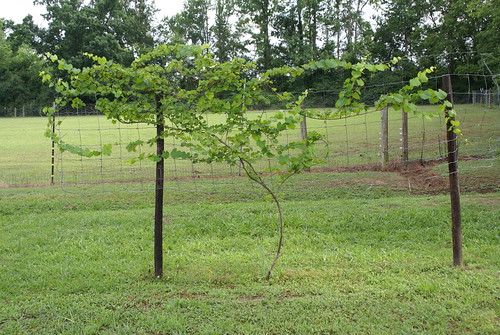 Though they are only about three years old. In any case, if we need something sturdier in the future, I’m sure Fred can figure something out. The main reason we planted grapes in the back yard is that we hope they’ll spread out along the fence and provide us with some privacy (the house next door is very close). If they get to be too much for the fence, we can always trim them back.

This has been around several years. Have you seen it? I was able to download this song & it’s always on my playlist!

I had not; that’s very cool. And here I was all impressed with myself for cutting a few holes in a big box and getting Spanky to think it was pretty neat! 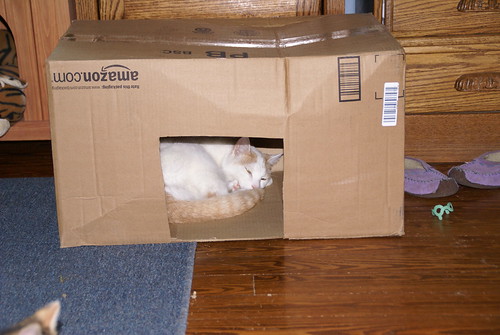 Do you recarpet your cat trees? I have a couple that need it, and I have a nice piece of carpet my neighbor gave me when he recarpeted his bedroom, but I’ve never done it before. Do you take off the old carpet? Do you glue it down (what kind of glue?) or staple it or both? I figure if you don’t know, some of your readers will! 🙂

I have never recarpeted a cat tree, so I’m posting this in hopes that someone will have some words of wisdom!

I bought a t-shirt from icanhascheezburger.com a couple months ago, and every time I wear it, it makes me think of poor little Maggie (and I laugh at the same time!). I’ve been meaning to post a picture of it for you for ages!

That is AWESOME! (And in Maggie’s case, SO true!)

We were wondering when Maggie’s babies will go up for adoption?

They’re all set now – we’re just waiting for room to open up at Petsmart. Could be any day. I am going to seriously miss these guys when it’s time for them to go. 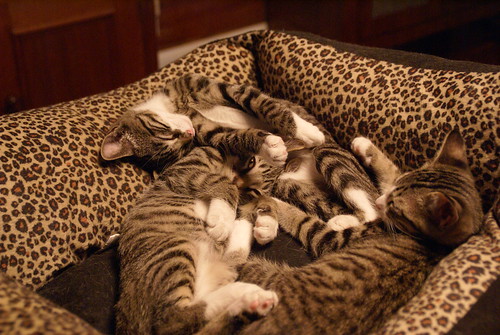 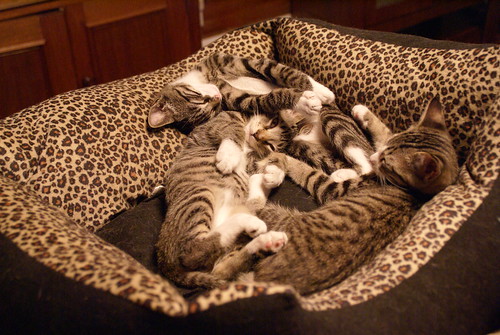 “Are you sure these Declan hats are all the rage in England?” 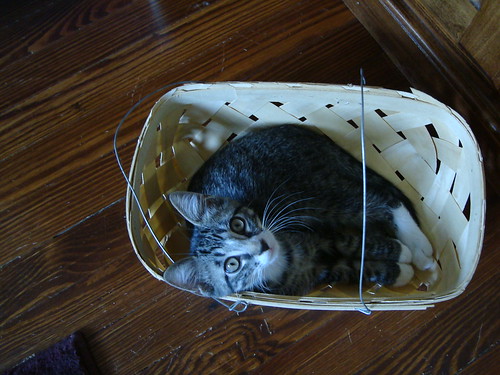 Macushla in a basket! 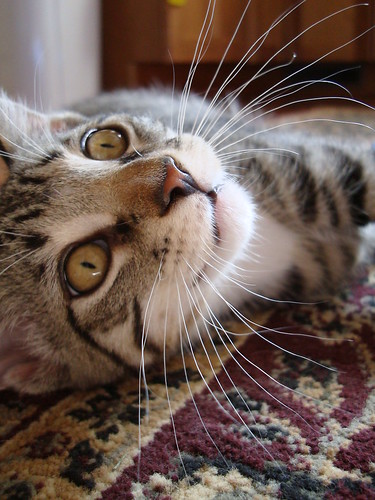 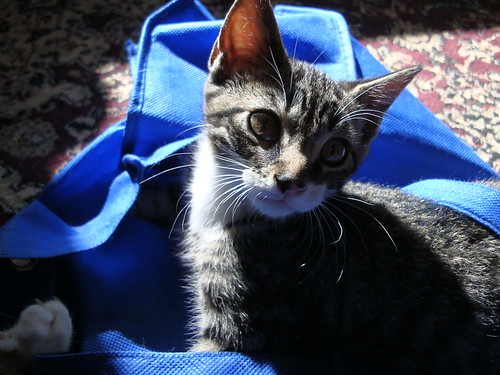 Declan’s a helper, making sure there are no groceries in that bag. 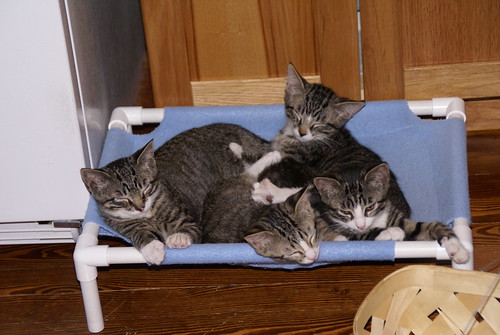 I wonder if we could have fit a few more McMaos in that ham-mick. 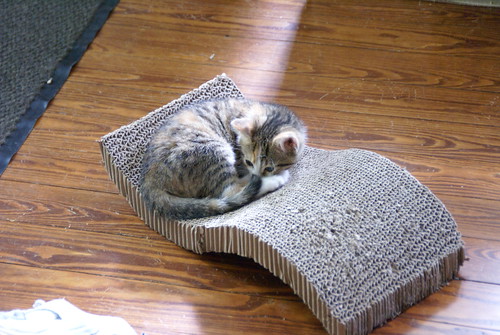 Cilantro on the scratcher, keeping an eye on her tail. 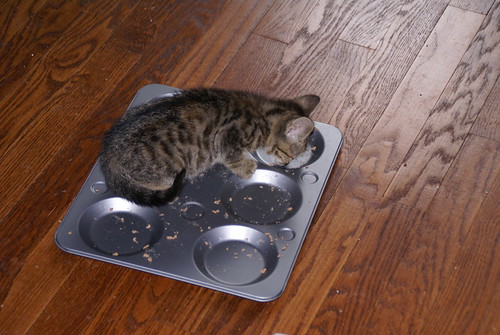 Clove, batting cleanup. (In the morning, the Spice Girls get their snack upstairs in their room while I’m scooping litter boxes. Usually by the time I’m done scooping, they’re done eating, so I let them out. Then I go downstairs and give the McMaos their snack, and on this particular day, Clove wandered along and realized there were leftovers to be taken care of.)

Dorian suggested, a couple of weeks ago, using a muffin top pan to give the McMaos their snack. It works wonderfully (I usually put a couple of dabs of food in the middle in case Maggie wants to join in – which she doesn’t, lately.) and it’s a lot better than having to juggle an armload of dishes! Thanks for the suggestion, Dorian! 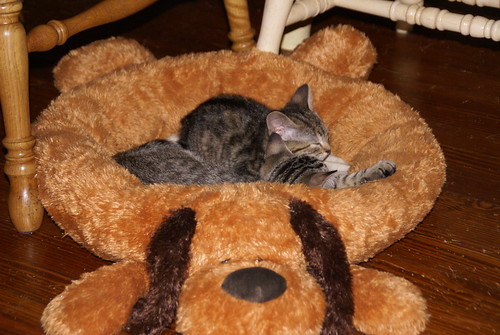 Clove and Fergus Simon, in the cat bed under the table. That cat bed was originally on one of the chairs, but they kept knocking it down, so I gave up and left it there. 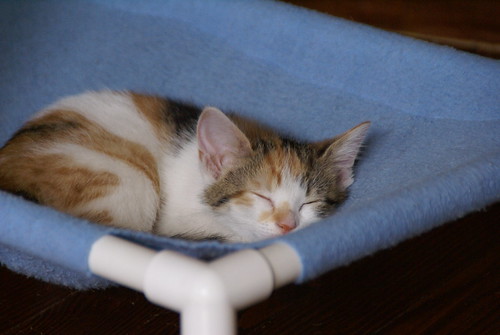 Sweet Miss Cori, on the ham-mick in the kitchen. We have three ham-micks in this house, and that one’s the most popular by far. 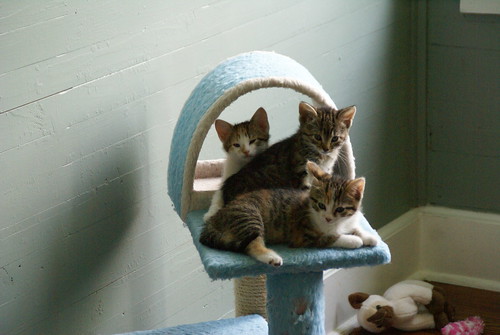 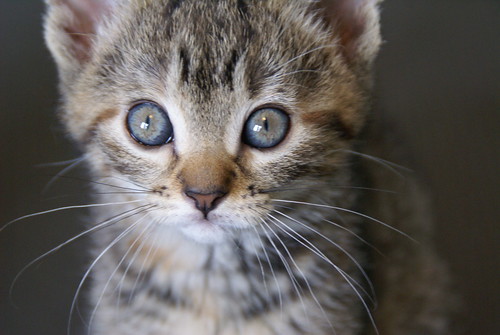 She looks oh so sweet and innocent, doesn’t she? Don’t be fooled! (Clove) Loony Jake and Alice snuggle up.