Yesterday, I got an email from the shelter manager reminding me that I was slated to do a segment on the 4:00 news with Bev from the North Alabama Spay Neuter Clinic. I’d agreed to it weeks and weeks ago and had immediately completely forgotten, but luckily it wasn’t a big deal because I had no plans. I decided to bring Leia because I thought she’d show up best on camera and because she tends to be a bit less skittish than Aslan.

I swung by Petsmart, picked up Leia, and off to Parkway Place Mall we went! I wasn’t on the news myself this time because it makes me so nervous that I opted not to. So you won’t see me in this clip, but rest assured that I was just off-camera in case Leia decided to lose her mind (she didn’t – but she had plenty to say!)

If that embedded video doesn’t work for you, this direct link may or may not work.

Unfortunately, no Royals were adopted last night. I suspect that adoptions will be slow this week due to the holiday, but hopefully they’ll pick up!

Cydney reported to me yesterday that Charming is doing great! He’s playing, purring, climbing up into his mama’s lap when he’s sleepy. He and his new brother (Harley) sniffed at each other under the door with no drama, so after a night apart, they were introduced yesterday morning. Charming went a bit floofy, but calmed down quickly, and there was lots of running, playing, talking, and being watched by his big brudder. I bet they’re going to be BFFs really, really soon.

I’m not surprised at all – that Charming is certainly well named!

Guess who’s headed off to be spayed on Tuesday? 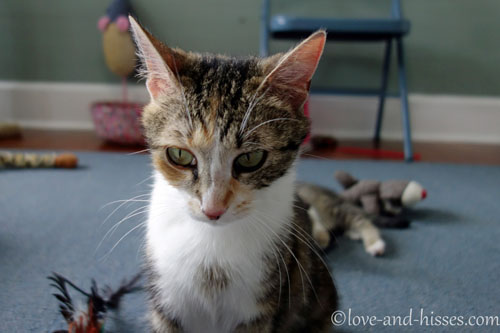 That’s right, it’s Mama Khaleesi’s turn! Her kittens are 8 1/2 weeks, and so I feel like I’m racing the clock on getting Khaleesi spayed before she goes into heat. I was able to get Kate done before she went into heat – will I be able to this time, too? I hope so! 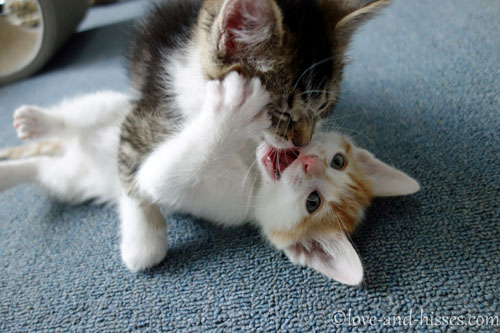 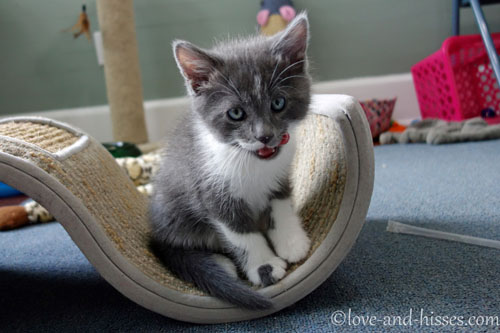 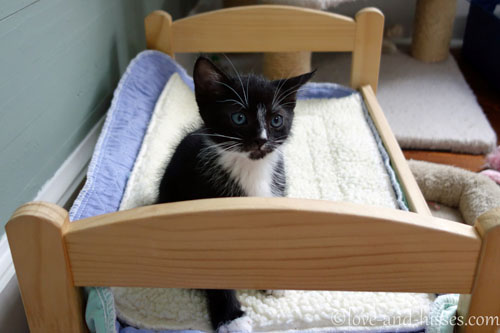 “Why you always harassing me when I’m hanging out on my bed, lady?” 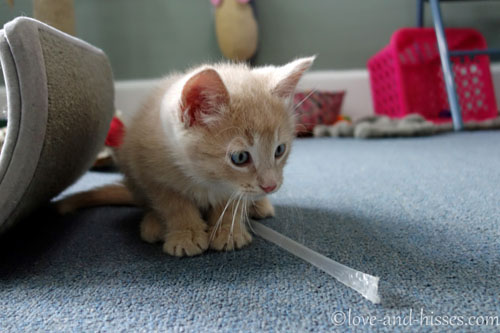 Scorch keeps an eye on that straw. 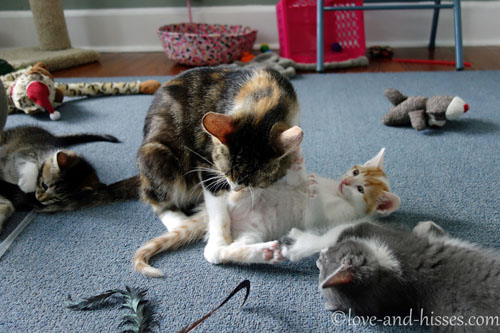 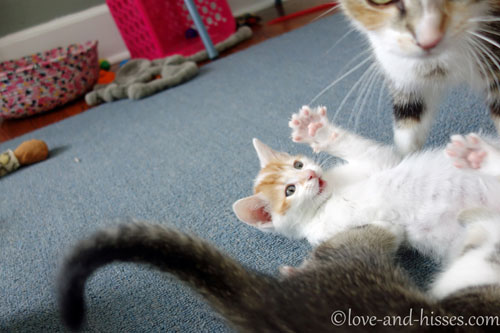 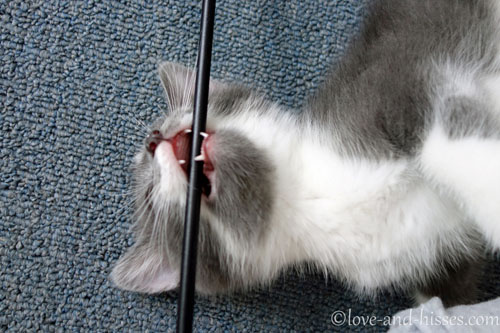 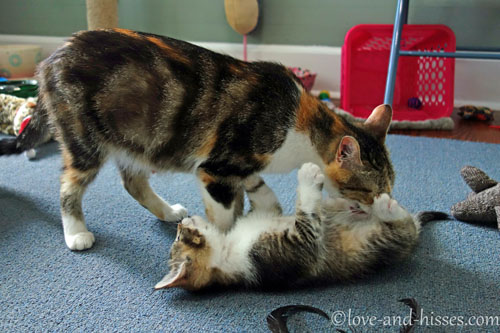 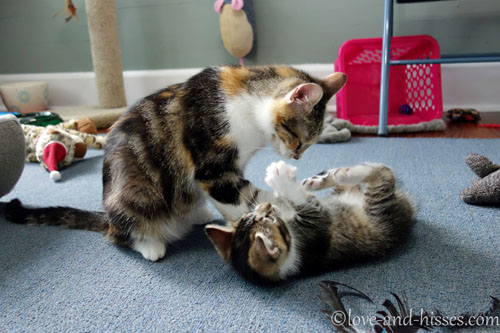 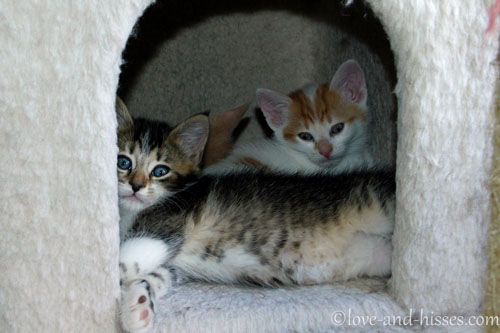 Ember and Ruth, hangin’ out in the cat tree condo. 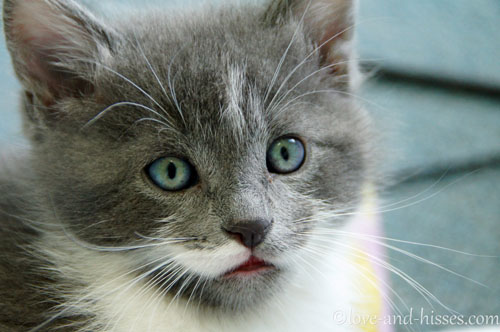 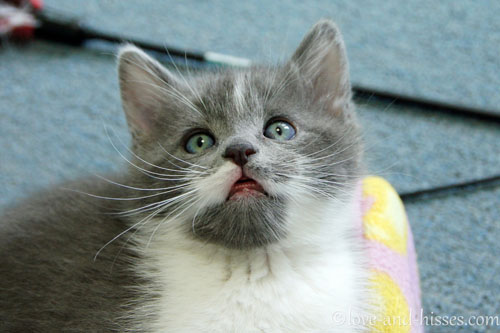 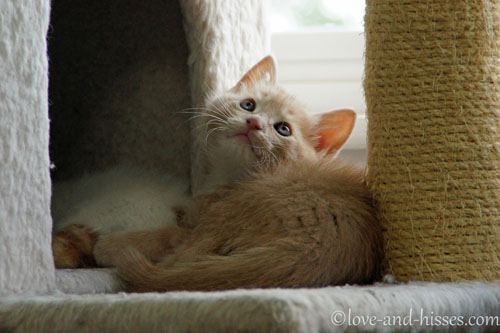 After the Dragons rushed the door for the millionth time on Thursday, I decided it was time to give them a little more room to roam. I put the barrier up across the hallway, and opened the door so that they could have the bathroom and Fred’s room to explore. The kittens aren’t sure what they think, but Khaleesi thought it was AWESOME. It took her maybe five minutes to realize she could jump to the top of the barrier and then jump down onto the floor on the other side. She spent more time away from her babies than with them, but went back and checked on them every once in a while. She certainly liked having the freedom to roam the house. There was some hissing between her and Corbie, but for the most part it was drama-free. 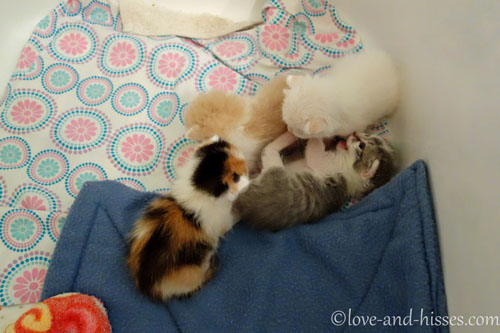 I moved the Starks from their carrier to the tub, so they’d have more room to stretch their legs if they want to. Of course, every single time I’ve peeked in on them, they’ve been curled up on the heating pad, or not far from it. They get plenty of exercise racing around the tub howling when it’s time to eat, though. I take them out of the tub, one by one, feed and potty them, and then set them on a blanket on the floor. Whoever is the last to eat (it varies – no one always gets to eat first, and no one ever eats last every time) usually paces back and forth, trying to figure out how to get out of the tub.

After everyone’s fed and pottied, I put them in my lap and they roll around and gum each other and just generally look fat and happy.

(Speaking of fat and happy, Jon Snow weighed in at 11 1/2 ounces yesterday. He’s more than doubled his weight, and he’s almost an entire ounce heavier than Bran, the next largest kitten. Arya’s the smallest at 9 3/8 ounces. What she lacks in size, she makes up for in lung power! Their weight chart can be seen on their page, here.) 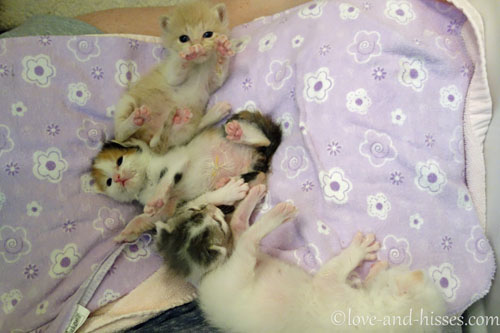 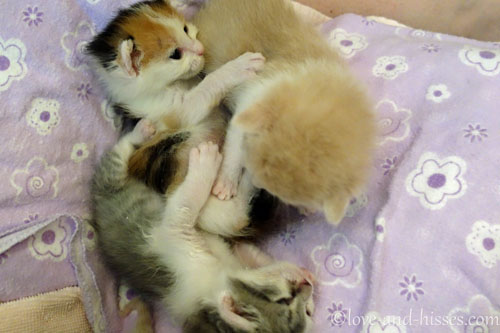 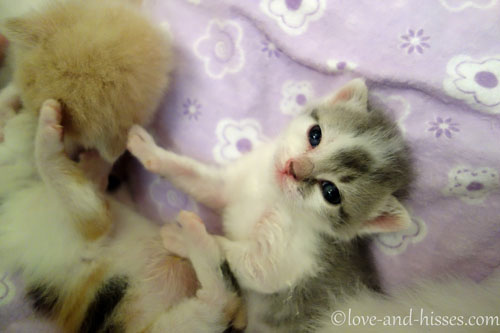 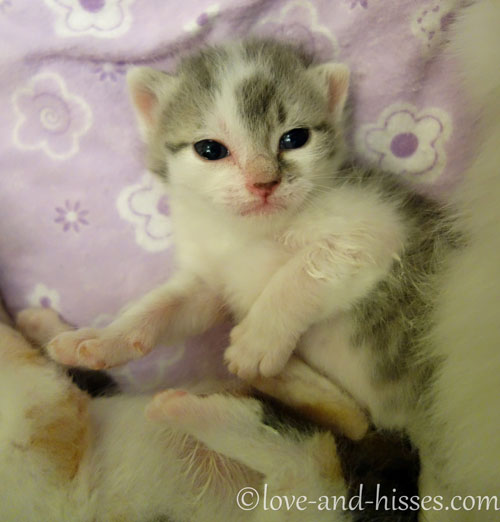 I got a short video of Jon Snow, howling because he’s starrrrrving. I was holding the bottle for Arya with one hand, and trying to get Jon Snow’s “voice” with the camera, so it’s a bit shaky. Toward the end, when he really gets going, he sounds like a seagull to me! 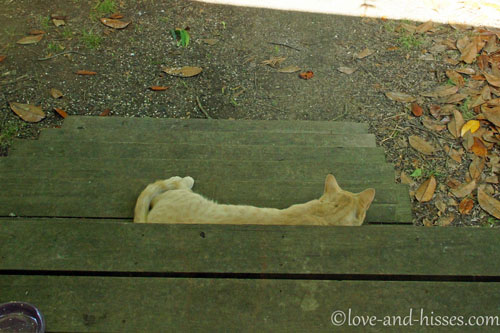 Current nickname for Stefan: Stringbean, because he’s so long and thin.