I picked up a bunch more cards yesterday at the post office and scanned them in!

They can be seen here, or you can scroll through them below. 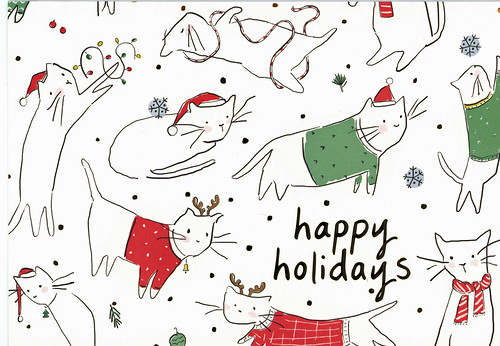 (Thank you again, everyone who sent cards. I love them so much!) She likes that teaser that Fred is, uh, teasing her with. Her favorite favorite FAVORITE toy is the packing strap. We won’t have kittens tonight, I can just about guarantee it. I don’t think we’ll see kittens ’til mid-January (though I might revise that opinion if she suddenly gets bigger.) My birthday is January 9th, so that’s a good date to shoot for – but I really think it’ll be longer than that.

For those who didn’t catch it on social media yesterday: Moira has met Charlie, and she thinks he’s fabulous. She trills at him and follows him around. He ignores her and eats her food. It seems to work well for them. Charlie’s all “Christmas is over, lady. When you gonna put the tinsel away?”