In case you missed it, yesterday… 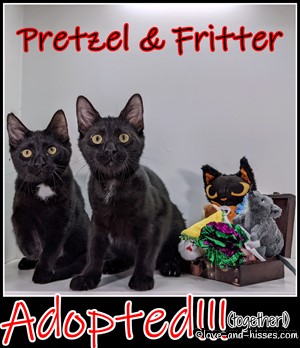 Pretzel and Fritter went home to Atlanta! Pretzel is still Pretzel; Fritter is now Peanut. I LOVE that they’re now Pretzel and Peanut. Or Peanut and Pretzel! We sure enjoyed getting some extra time with them, they are such sweethearts.

(And Jill said they’re going to have a page! I’ll share that when it’s up and running.)

Today’s post includes the last of my Pretzel and Fritter/Peanut pics. Pretzel making sure Fritter’s clean for the trip home. I went out on the screened porch to refill the food bowls, and the kittens (who have not been allowed out there because (1) it’s Alice’s only place to get away from kittens, and (2) I’d be too worried about them figuring out the cat doors to the back yard) were all “WHAT ARE YOU DOING OUT THERE?!” Pretzel was like “Uncle Newt, you scoot over a little so I can watch birds with you?” (Uncle Newt declined that request.)

“Enjoy your break,” some people said on Facebook yesterday when I announced that Pretzel and Fritter had gone home. “Hope you get some time to relax between litters!” We got her over a week ago – she’s been hanging out in the guest bedroom ’til the foster room was empty – and at first she did a lot of this. Now she’s still a bit nervous, but thinks that petting is maybe not so bad. Yes. I do believe she’s got kittens in there. I’ve had several cats in the past that I thought were pregnant, but turned out not to be. So I’m not 100% sure any cat is pregnant unless they’re actively giving birth. But I’m like 75% sure that she is. I think we’ve got at least a couple more weeks to go. (Not that I ever really have a CLUE.)

She came from an outside colony of cats, is clearly not feral, and is about 10 months old. (Yes, that’s young. Caroline was younger and smaller.) Moira. Give us the bébés. Khal’s like “Oh, what a relief. I was afraid we might go without fosters for half a second. More screamy newborn kittens? I am joy-filled.”