So were you feeling a little short in the perm residents dept?

Charlie/Chuck/Chuckles/Aramis has been my favorite all along. That nostril freckle of his kills me dead. I know it isn’t likely, but I hope he always stays a long lanky boy.

We weren’t feeling at all short in the permanent resident department, which is probably why adopting Charlie was such a difficult decision for us. The most cats we’ve had was 14, when we lived at Crooked Acres, and as the cats started passing away people would say “You have room now, you should keep (every single foster we’ve ever had)!” Well, no. No we didn’t. We never intended or wanted to have 14 cats. If I had to pick a number out of the air, I’d say 4 is a good number to have, but that’s just theory. (Having said that, of COURSE I have loved every one of our cats and wouldn’t have traded any of them for the world.)

I think Charlie is going to be a big boy – his paws are BIG and Ryder’s kittens Axel and Piper (formerly Dynamo) (who we think are related to Charlie somehow, because they all came from the same area) are big kitties. We shall see!

Hey Robyn, I spotted good sized photo of a close-up photo of a cat face, I think in a frame, on a white background, in your room——any particular cat?? or just a great picture?? That is our dear sweet Dennis. A few years ago, Helen (see her site here) drew this lovely picture of Dennis (which was included in her book 101 Cats, volume 2), and sent me the original. I absolutely adore that picture! (Which still needs to actually be hung on the wall… one of these days!)

That long green springy toy? If Malcolm saw that he would lose.his.poop. He thinks the small spring toys are the best thing ever, so a super, foot-long one? No comin’ back from that.

Sorry, If you’ve answered this already, but where did you get the sherbet bed?

By the way, in my house, I have like 3 to 4 beds or toys that I found and purchased Because I saw them in your house! I recently acquired, the much desired, hard to get taco truck scratcher !!! I never would’ve known about it if I hadn’t seen it at your house, so thanks !!

I got that bed from AmazinglyCat – it’s the XL (23″) size, and took about a month to get here.

Has there been a litter with bigger ears than these guys?

Is it me or the camera, but all these kittens seem to. have large ears, remind me of one of the smaller breeds of wild cats–servals, maybe. Since all of them have the ears, did the gene came from Mom? I do not remember her ears as being semaphore like. So maybe she had the ears but grew into them.

Alexandra has pretty average ears – these guys do seem gifted in the ear area. I’ll be curious to see if they grow into them or not. I do wonder if they possibly have some big-eared breed in their genetic background, they – especially d’Artagnan – are very sleek and long and have smallish heads and big ears.

Aw, I love that photo of Jake and Khal! Are they always hanging out together?

Jake and Khal are so adorable! Was there ever a clue that these two would be a “couple”?

Jake and Khal can often be found cuddling, but they’re not always together. It mostly seems to depend on whether Jake needs a snuggle. I’ve never seen Khal initiate a cuddle session with Jake, but Jake seeks out Khal several times a day. Jake is the one cat no one else has a problem with; he can be seen head-bumping and rubbing against most of the others, who tolerate it. (Almost no one has an issue with Khal except for Archie, who is NOT a fan.)

I’m not surprised that Jake and Khal are a “couple” – Jake likes attention from other cats and Khal’s happy to oblige. Charlie, on his trips downstairs, likes to follow Jake around and Jake seems to be okay with it. (Fred saw Charlie rub against Jake more than once. I think they’re going to be best buddies.) 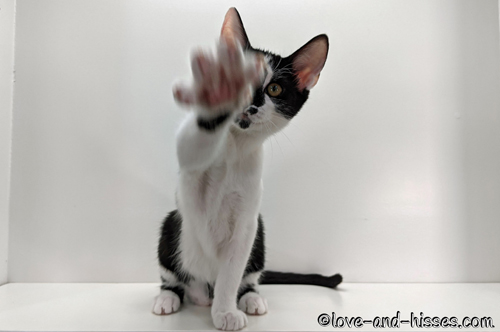 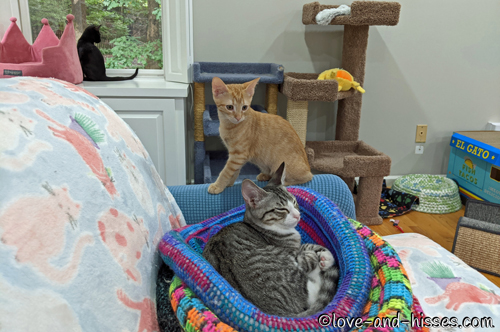 I haven’t exactly moved Charlie’s pile of beds out of the foster room yet, obviously. 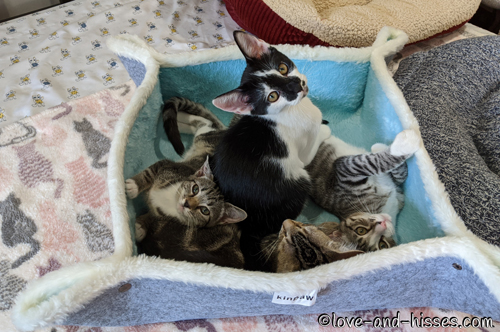 Constance’s grumpy little face kills me. “I was sleepin’ and then Porthos came and practically sat on my HEAD.” 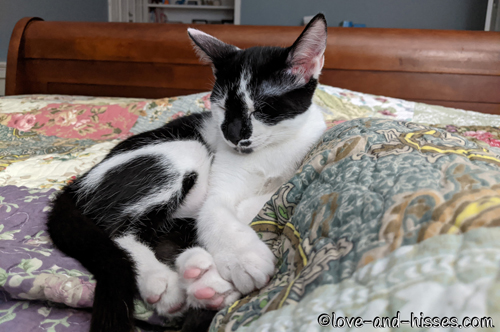 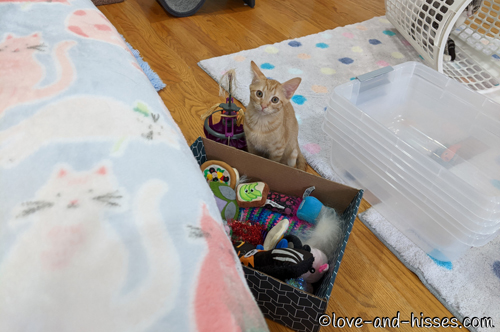 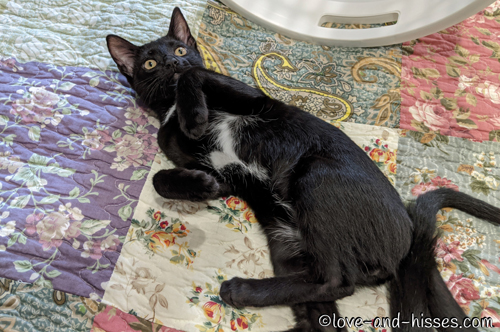 D’Artagnan wonders if it might be time for the belly rub. 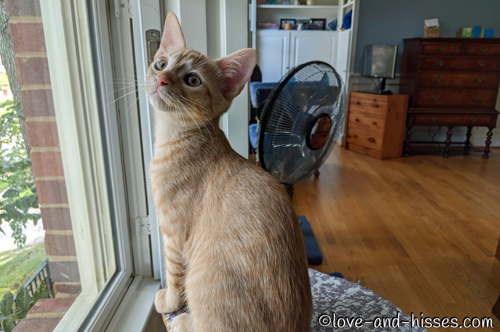 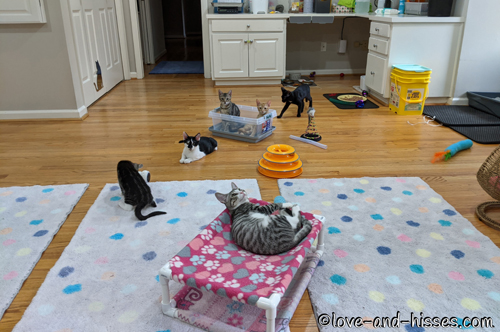 All 6 kittens, hanging out. 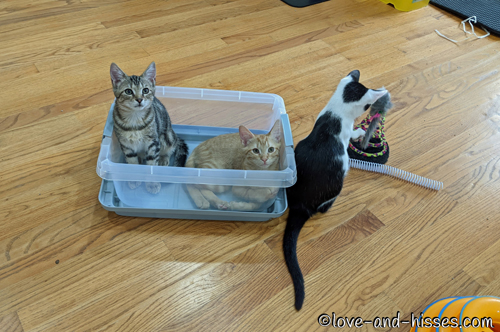 These kittens just think that storage container is AWESOME. 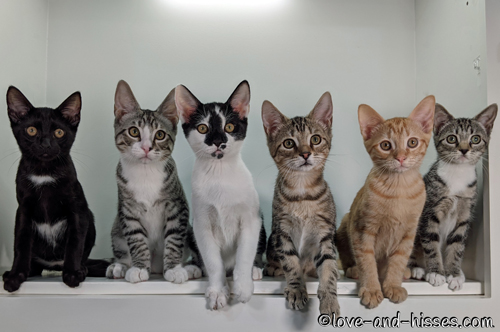 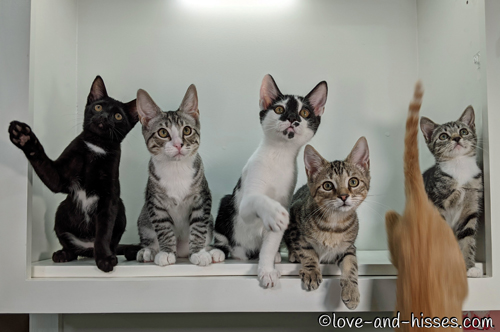 And Athos is OUTTA THERE.

Constance and Rochefort are headed home tomorrow! I have to tell y’all that letting go of fosters is one million times easier when they’re able to go straight from here to their new homes without having to stay at Petsmart. I have been exceedingly lucky that none of this year’s fosters have needed to go to Petsmart! 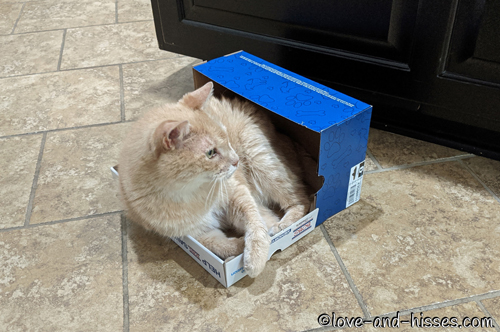 Newt is a man of many boxes.