Now, since I have to remember to change the post link every time I write a post, and since I’m 100% sure that at some point I will space on doing that, if you click on the link and you’re taken to a previous day’s comments, PLEASE let me know! 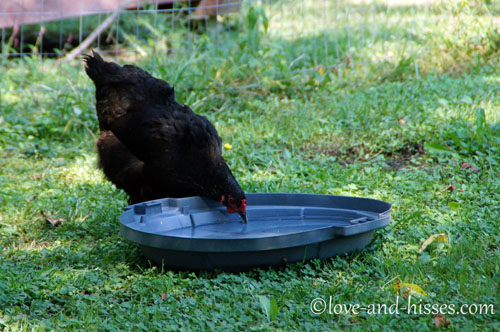 This is Wanda; I don’t remember if I’ve introduced y’all to her before. She escapes the back forty just about every day, and wanders (thus the name, get it?) around the property. She spends most of her time eating bird seed under the bird feeders in the side yard. When Fred goes out to gather eggs and feed the chickens in the afternoon, he lets her back in. 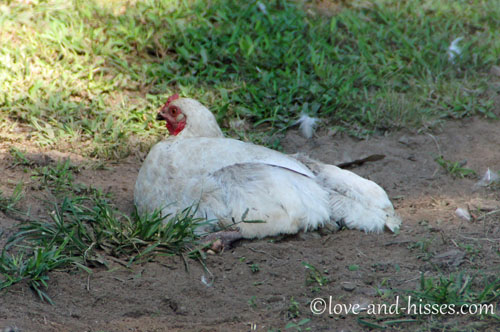 Time for a dust bath. 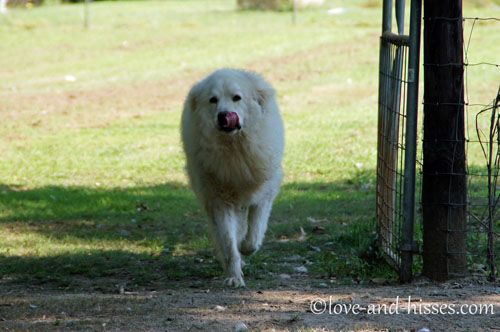 George and Gracie like to hang out in the pig yard (since we didn’t have pigs this year, Fred left the gate between the back forty and the pig yard open), and when they see one of us coming, they slink out, looking guilty. I don’t know why they’ve decided they’re not really supposed to be back there – and they haven’t gotten in trouble for it – but they still look SO guilty. 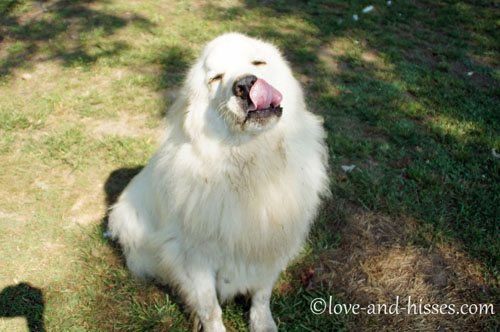 “Ah lubs it back there. It smells like bacon!” 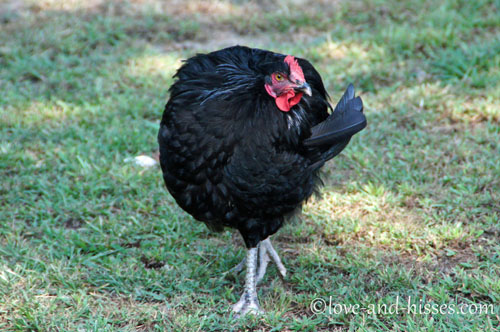 This is the hen we call “The Basketball.” She was one of the Cuckoo Marans we got at the flea market in the Spring. Fred started calling her The Basketball because she’s round, but it wasn’t until recently that he realized why she’s round – her back is severely curved to the side. She doesn’t seem to be in any pain, and she gets around just fine. I’m not sure what will happen if her body decides it’s time to start laying eggs, because I can’t imagine that her insides are constructed properly. All we can do is wait and see. She also manages to get up on the roost at night, and balances by hanging one of her wings over the front of the roost. She’s kind of amazing, actually. I hope she’s around for a good long time. 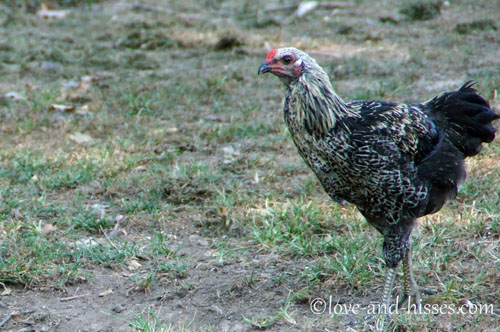 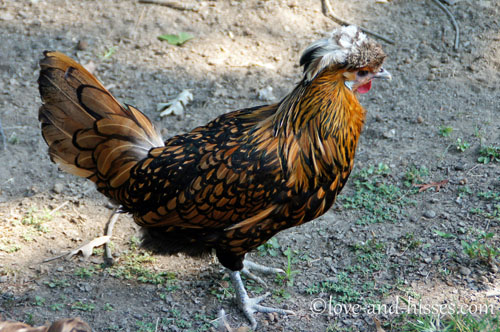 The Rock Star is still rockin’ that mullet. 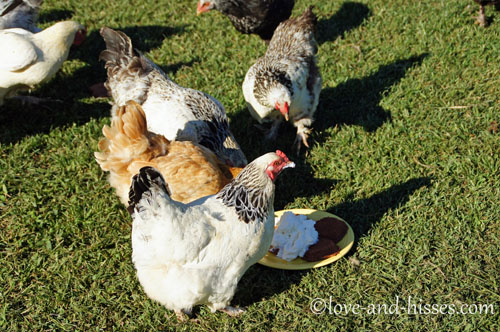 I made a recipe that neither Fred nor I cared for – but the chickens thought it was AWESOME. 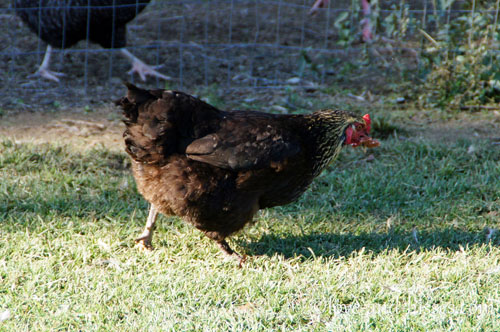 She got a big ol’ chunk of sponge cake and ran off to eat it in peace. 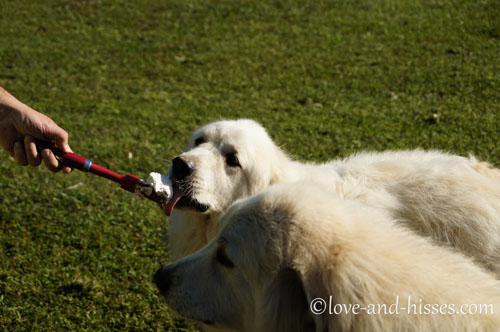 The dogs couldn’t have any of the cake (since it had chocolate in it), so they got whipped cream as a consolation prize. 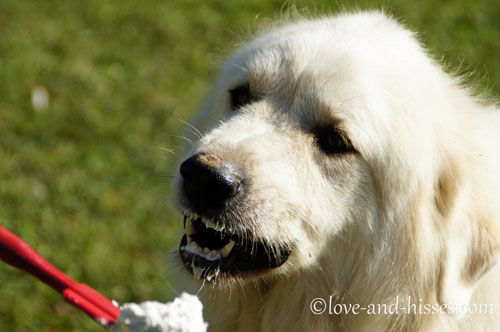 Gracie was like “WE NEEDZ TO HAVE THIS MORE OFTEN!” 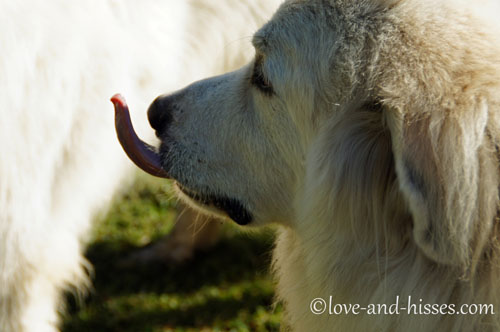 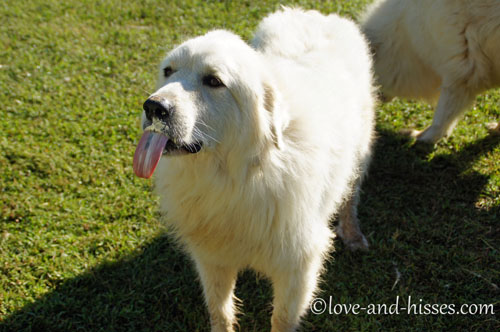 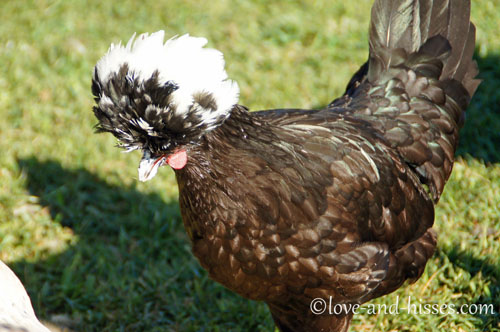 Cruella with a whipped cream-covered beak. 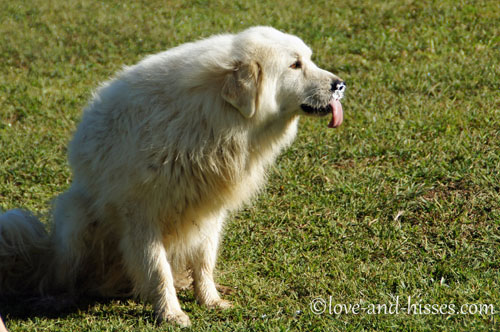 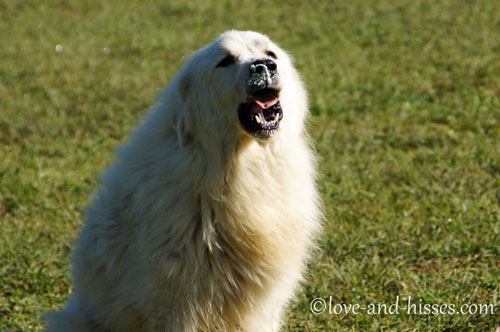 Okay, the next segment is a few creepy spider pics. Click here to skip ’em.

So you don’t have to see the spiders.

If you don’t want to.

Okay, I think the spider-haters have skipped by. 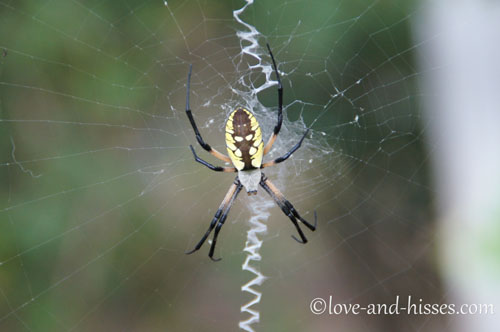 Dolores has come and gone. The instant the nights went below 60, ol’ Dolores was gone. I look forward to seeing her again next Summer! 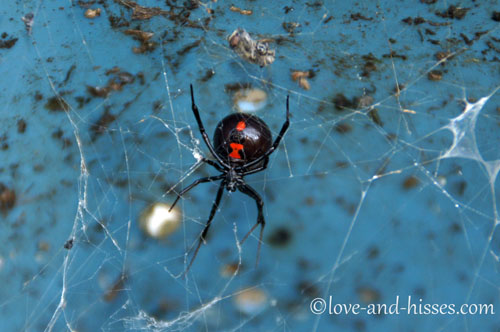 Black Widows just look SO freakin’ evil. This one lives in the compost bin in the back yard (it has a cover on it; the cats can’t get into it. STOP WORRYING.) I probably should kill it… but I haven’t yet, because I forget she’s there, and then I don’t have anything to kill her with. I don’t think Fred knows she’s there, and I’m not telling him because he’ll get all prissy about it. 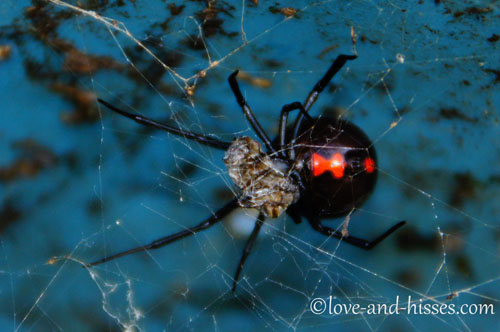 I’m not sure what she’s got all wrapped up here, but it looks… leggy. I hope she enjoyed it, and didn’t choke on any legs.

Hey, no one tell the skippers that they missed space spiders. 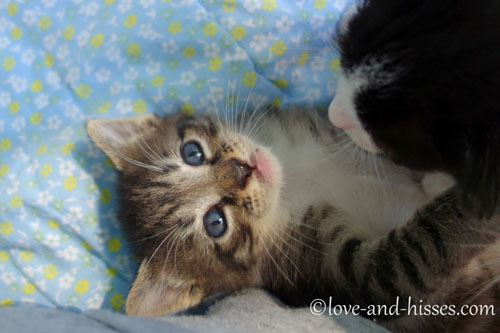 They look so sad and serious at this age, even though they’re the happiest little things. (That’s Dr. Melfi, pinned down by Meadow.) 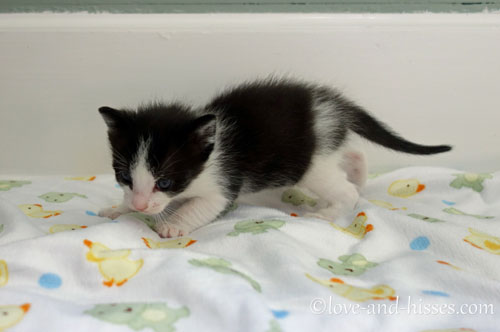 Meadow is just a tiny little morsel that will fit perfectly in your mouth and tastes like cotton candy and marshmallow fluff. 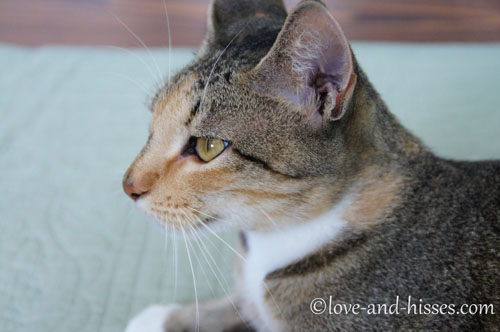 Livia appears to be having Funny Thoughts. 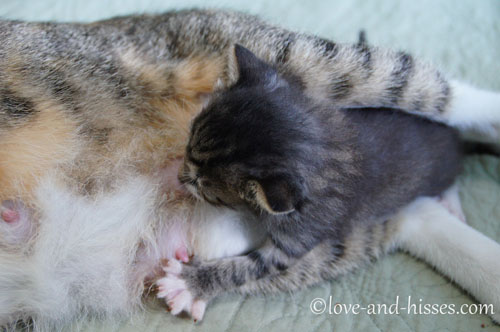 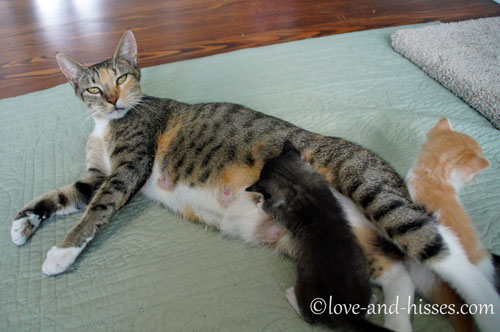 “Aren’t they too old for this nonsense?” 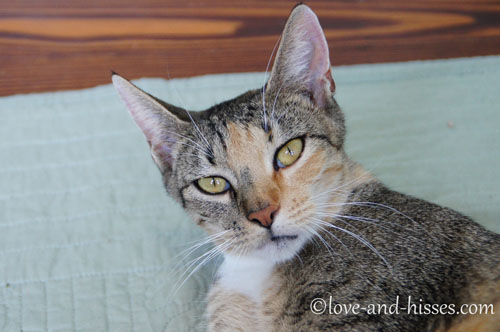 I put out litter boxes on Monday because I found that the blanket in the crate was soaked through (thankfully, I had a washable waterproof pad on the bottom of the crate!) Monday evening, Paulie Walnuts was acting whiny and like he didn’t know what he wanted to do, so I set him in the litter box. He looked around, whined some more, and then used the litter box. He did it again during the day Tuesday, and Meadow did too, so I think we’ve begun the figuring-out-the-litter-box stage. Which involves lots of litter-eating. Although I’ll say that I’m not sure they ingest all that much litter – they seem to get it in their mouths and then just walk around with it in their mouths. Then they spit it out, or let me dig it out for them. Silly kittens. 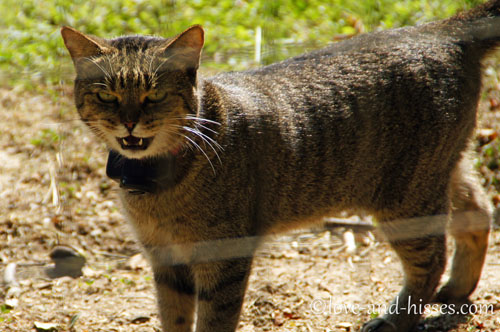 “EXCUSE ME, LADY, I’M GOING TO HAVE TO ASK YOU TO RETURN TO THE BACK YARD, WHERE I CAN PROPERLY PROTECT AND KEEP AN EYE ON YOU.” 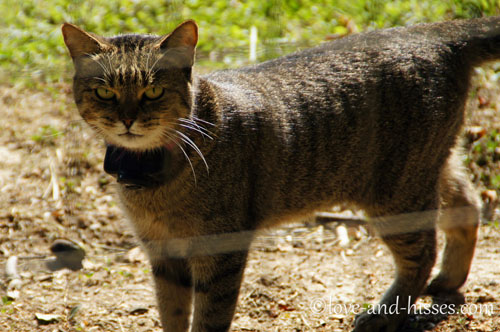 Those pictures came out pretty well, considering that I took them with the fence between us.

Yesterday, Kara had her annual trip to the vet (she’s perfectly healthy, it was just her turn). She is officially our smallest cat, at just over 8 pounds (Maxi’s the next-smallest at just over 9 pounds). She’s so small and light, in fact, that one morning last week she jumped up on the bed with me, and I couldn’t figure out where the kitten walking around on my bed had come from.