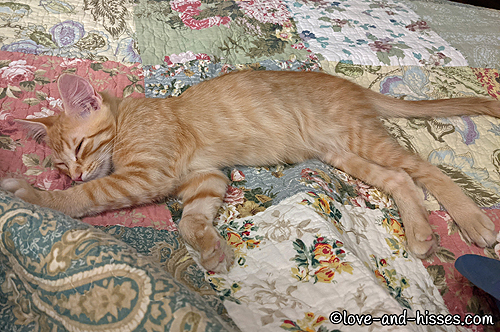 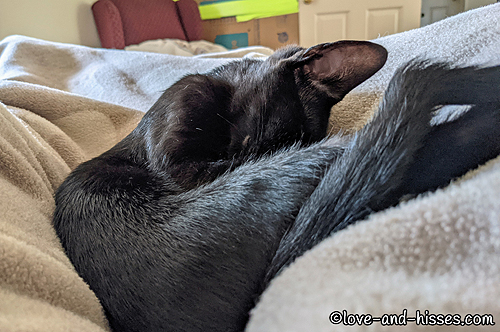 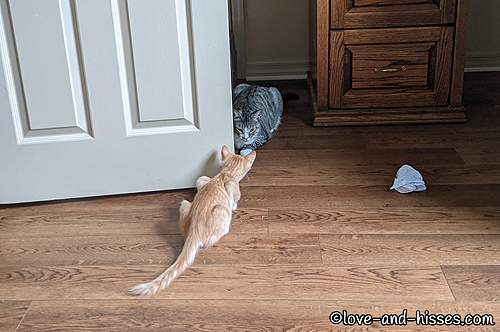 They are verrrrry slowly making friends with Uncle Charlie. Last night I was sitting in the living room and Charlie went running by… followed a few seconds later by Sofia! They’ll still occasionally hiss at him, but the hisses are much fewer and much less vehement. 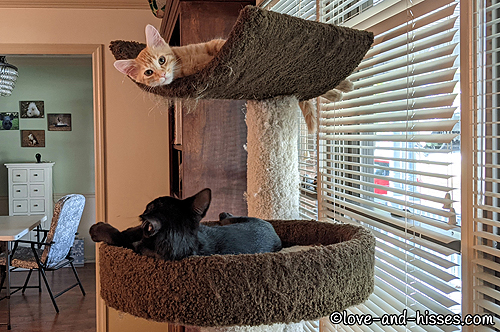 They love hanging out on the big cat tree downstairs. (Also, please note that we are using a folding table and folding chairs as our dining room table. Eventually there’ll be a real table and chairs there, but we’re in no rush. It works for now. You wish you were fancy like us.) 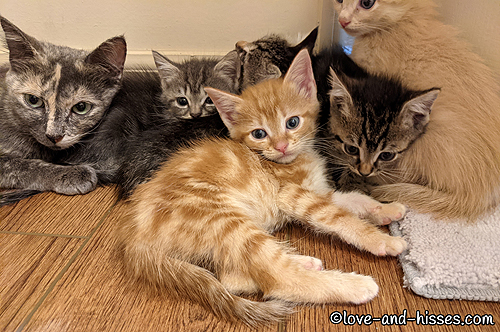 Please just let me point out the fabulous swirly markings on Ozzy Osmium. 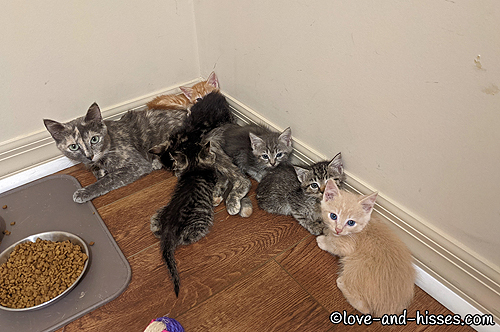 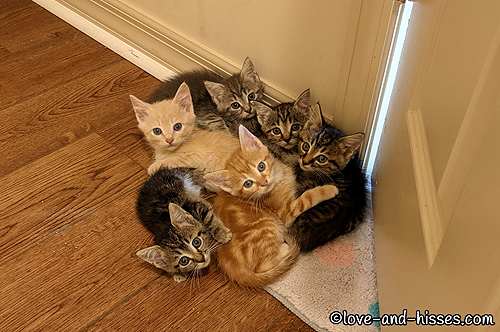 Curled up behind the door, still looking suspicious. 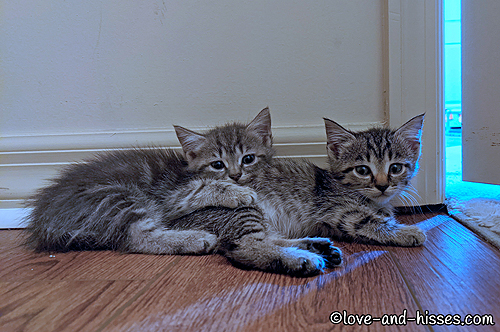 That’s Carli Calcium on the left, and on the right is… I have no idea. If forced to guess, I would say it’s possibly Nikki Nickel, since she and Carli were the last ones to venture forth from the closet. Edited to add: going by markings (thanks, Cat!) it’s more likely Ruthy Ruthenium! 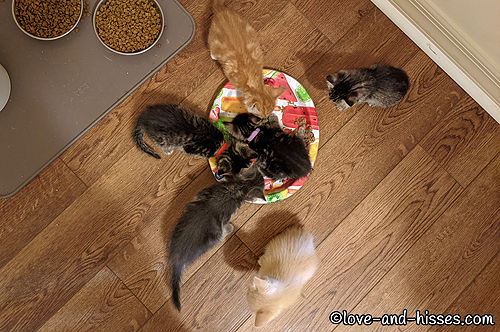 They REALLY enjoy the canned food. Please admire Nikki Nickel, who is sitting right in the middle of the plate. She’s the smallest, at 13 ounces. 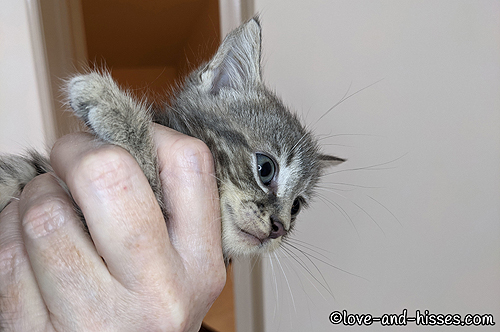 “This lady better put me down OR ELSE,” thinks Carli Calcium. (I did put her down, but you better believe I kissed her first.) 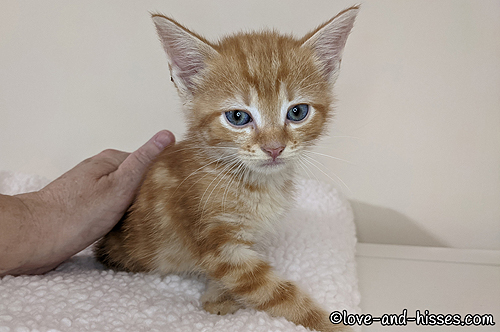 Ozzy Osmium is giving me a little attitude. 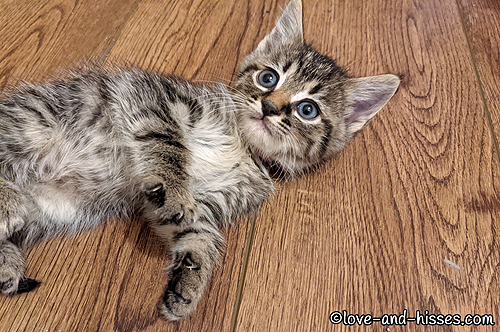 Barry Beryllium really loves a good belly rub. That boy will throw himself down on the floor and roll around on his back in no time flat. 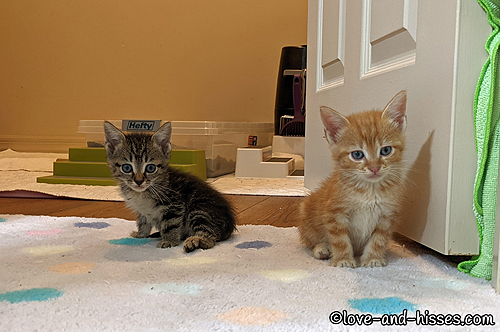 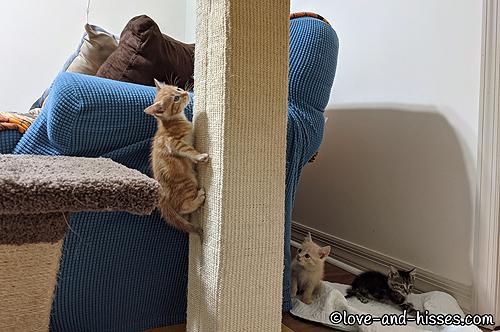 Ozzy goes for a stroll up the side of the scratcher while Sammy looks on.

1. This naming theme came from someone at some point in the past, and has been on my list. I don’t remember who suggested it, I’ve searched the blog and my email and all my notes, and I have nothin’. So if it was you, feel free to step up and take credit!

2. I mentioned weights up there (well, I mentioned Nikki’s weight.) The kittens’ weights range from Nikki at 13 ounces to Sammy at 1 pound, 6 ounces. (When I get their page up and running – won’t be soon, but will eventually happen – I’ll put the weight chart on there.) Nikki is a little thinner than I’d like, but she’s a good eater and as I will tell anyone, we don’t grow ’em small here at Love & Hisses headquarters. She’ll be packing on the ounces in no time flat. Maddy Magnesium is skin and bones, which is not unusual for this point in the mothering experience. When I got Molly Marinara she was skin and bones too – now she’s at a good solid weight, and I expect that Maddy Magnesium will be the same way. I certainly did buy her affections easily with the help of a Churu – the girl has an appetite, and good for her!

3. Maddy Magnesium (and side note: how often do you think I’m going to accidentally call her Molly? Two mamas in a row with the initials MM. Maybe not my brightest decision) and the kittens are spending most of their time out of the closet already. At this point, I have moved their food out of the closet so that it’s right outside the closet door (I don’t like having food too close to the litter boxes, because litter invariably ends up in the food and eww.)(“Eww” I say, as though these creatures lick each other’s back ends on the regular) and they had no problem finding it. They still return to the closet to sleep, but I’m sure that’ll change as soon as they realize just how comfy those beds in the foster room are.

4. A few people have asked why Sofia Soy Sauce and Theo Pesto can’t go into the foster room and hobnob with the new guys. I always quarantine new fosters from other cats for at least two weeks, just to be safe. (It’s usually longer than that, but 2 weeks is the minimum.) Also, Maddy might see the kittens (who are bigger than her own kittens) as a threat, and I don’t imagine Theo would take being attacked by a mama very well. This whole not being able to go into the foster room when I’m in there just CHAPS Theo’s hide, and he objects VERY loudly when there’s a door between us, poor (spoiled rotten) baby.

Lastly: this litter will be known as The Elements (There were a lot of great suggestions, so I presented Fred with the list, and that’s the one he chose.) 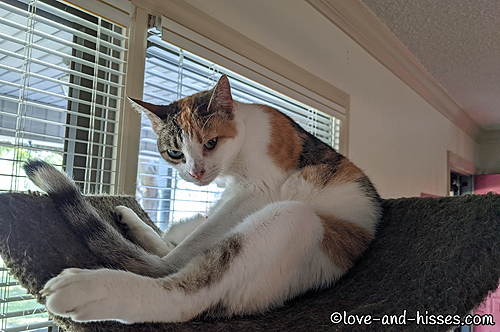 Alice Mo
the calico
don’t like those stinkin’ kittens,
no 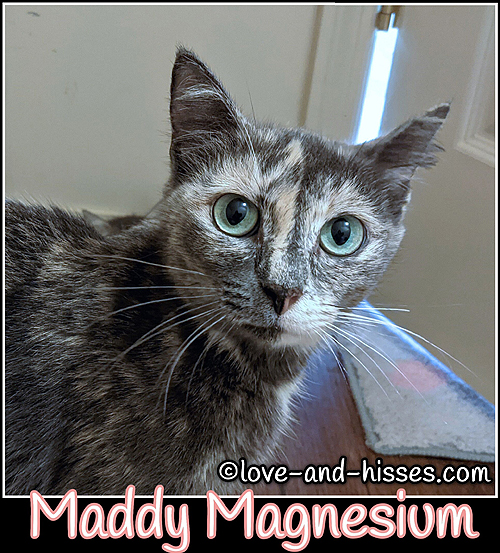 Say hello to our new foster mama Maddy Magnesium. She has 6 kittens (pictures will be posted in a couple of hours) and was trapped near the Facebook Data Center here in Huntsville, Alabama. She was believed to be feral, but as it turns out she’s just as sweet as she can be. She follows me around meowing and wanting love. (Note: Sofia Soy Sauce and Theo Pesto are now not allowed in the foster room – they have the run of the house and all their favorite toys, their litter box and their food is in my room, and they’ve been sleeping with me every night.) 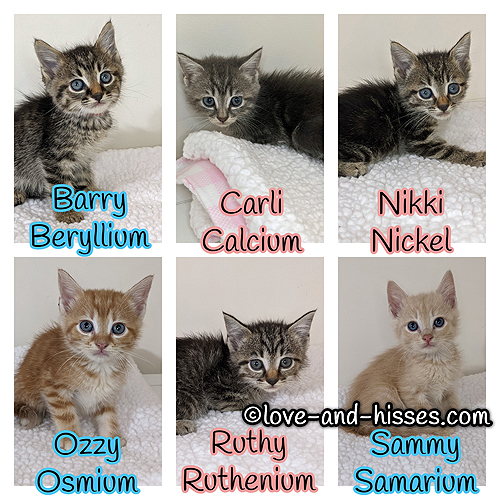 I’m going to call them The Elements unless someone out there has a better (catchier) suggestion. 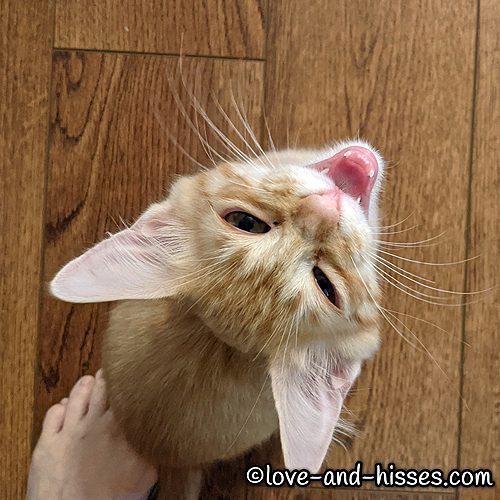 “I know you been in that other room feeding kittens, lady! I can hear you opening cans of food! If they’re eatin’ I should be eatin’, so hop to it!” Theo Pesto is always ready to eat. 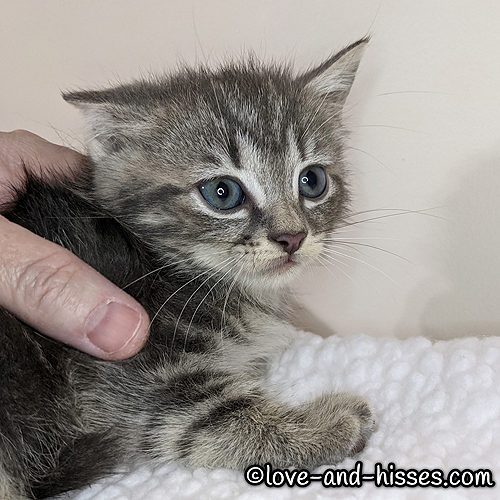 Carli Calcium is 100% over my nonsense already. 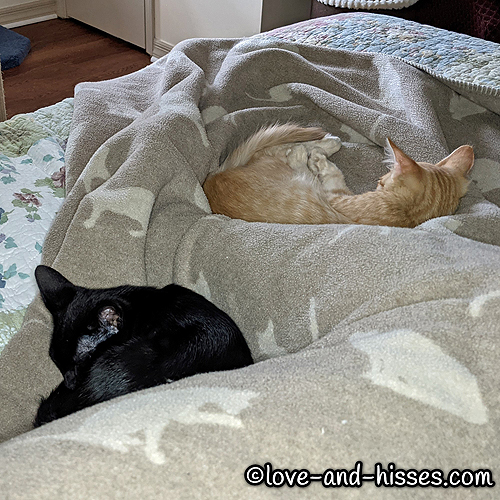