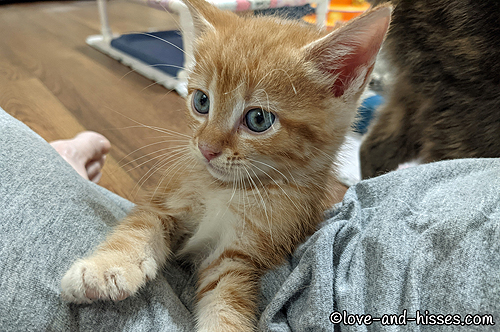 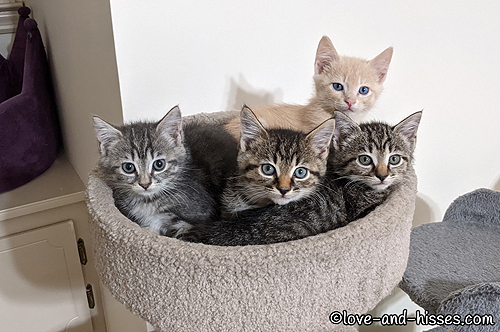 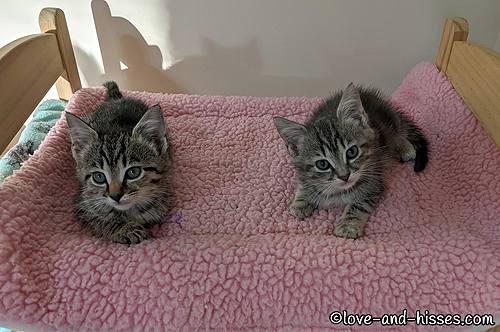 Barry (left) and Carli on the bed. Carli’s giving me a little of the ol’ attitude, as you can see. 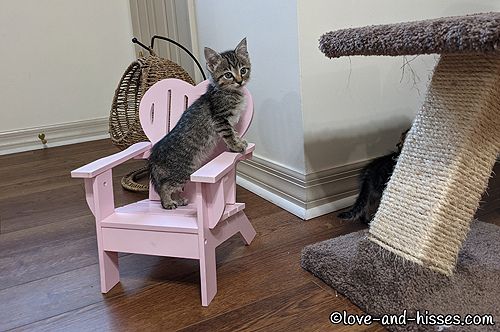 Ruthy’s considering her next move. 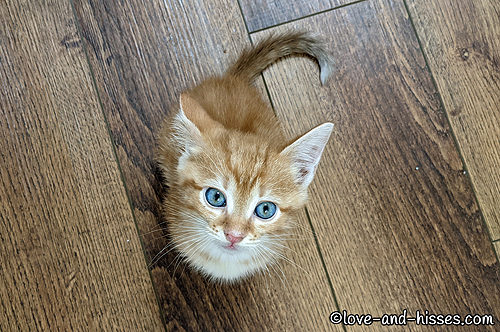 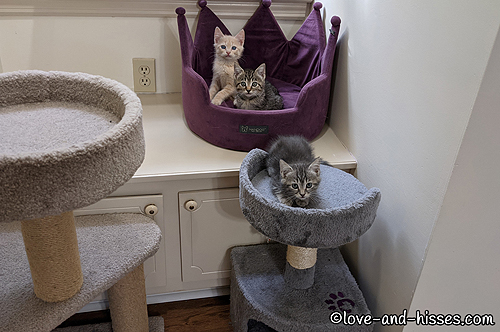 Sammy, Ruthy and Carli are ready for me to go away. (RUDE) 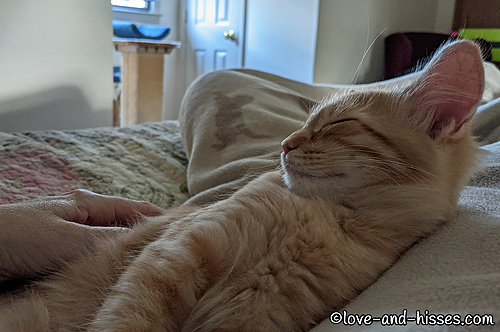 Theo Pesto is a snuggly bug. 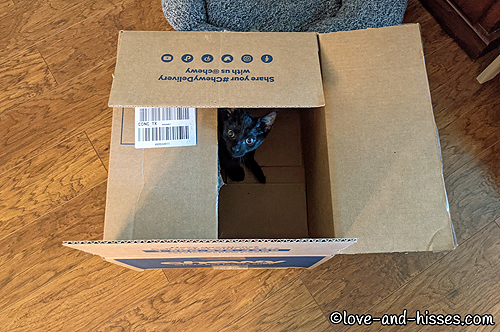 Sofia Soy Sauce is also a snuggly bug… when she’s not busy exploring!

We’re down to our last day with these two – they head home tomorrow! 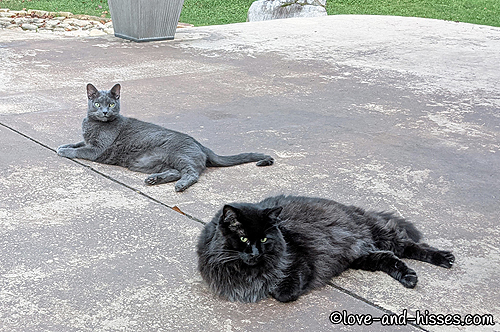 Jake’s got the crazy eyes going on – and Khal’s pretending he doesn’t see me. BRAT. 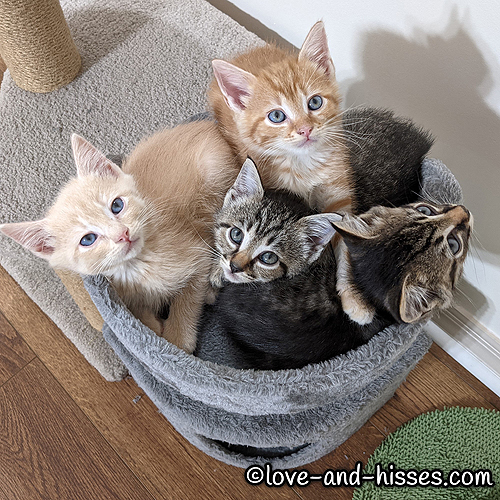 “Oh. It’s you.” With so many comfy places to sleep in the kitten room, naturally 4 kittens stuff themselves in the top of this little cat tree. That’s buff kitten Sammy on the left, orange tabby Ozzy next to him, brown tabby Ruthy in the center, and tiny brown tabby Nikki over to the right, studiously not looking at me. 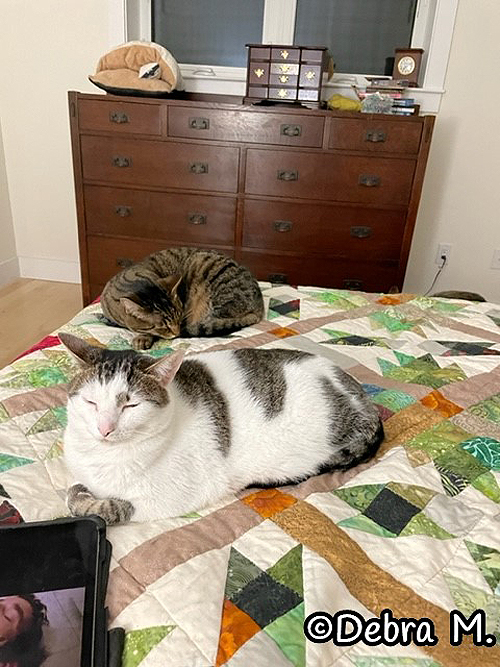 Former fosters Phoenix and Stardust (Mercury’s daughters; we fostered them in 2017) and just a tiny glimpse of Amber (our foster Ambercup in 2015). ⁠

Debra said: “Not the greatest photo, but I wanted to update you that we are in our new home [they moved to Maine from Alabama earlier this year]. It isn’t done yet, but we have the master bedroom and bath to ourselves while the work continues on the rest of the house. Everyone seems to be doing well, although Phoenix had a case of the hisses. This is Phoenix and Stardust, with Amber (who wasn’t phased at all by the move) just visible in the background (just the top of her back is showing).”⁠ (Thanks, Debra!)

YouTube link
I was moving a toy around to get their attention, and it did – they were like “What is that weird lady doing NOW?” 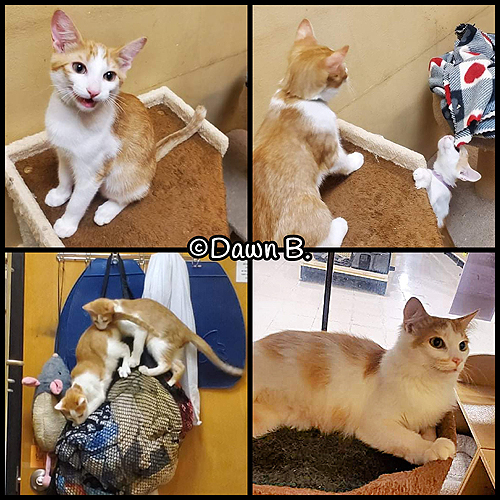 FYI, Molly Marinara and her three boys are still at Petsmart and have settled in pretty well according to the volunteers. There’s been an adoption application filled out for Franco Fondue that will hopefully work out, but nothing yet on any of the others. Sometimes it just takes time, and apparently that’s what’s going to happen here. In the meantime, they’re doing well. (Thank you to Dawn for letting me steal her pics!)

YouTube link
The kittens like to keep an eye on me because they never know when it’s gonna get CRAZYYYY. 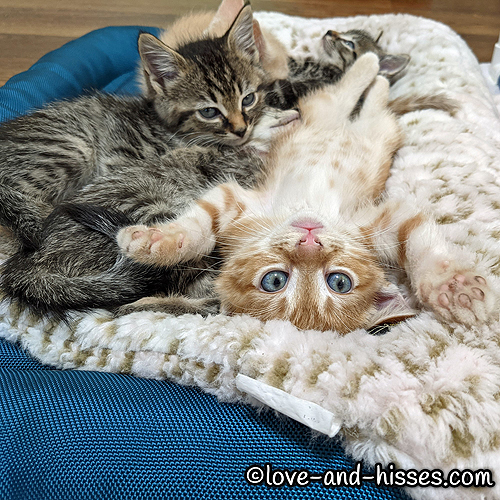 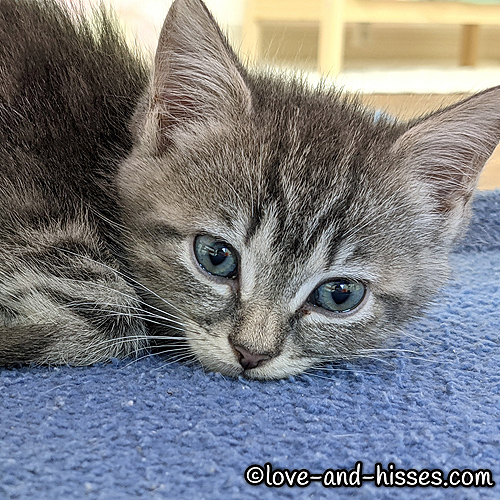 Previously
2020: This ham-mick gives Davy Crockett the Crazy Eyes.
2019: No entry.
2018: “I was SLEEPIN’ in the SCRATCHER BOWL, and then the ornj wave DESCENDED!” pouts Solenoid.
2017: She is a LAYDEE, you know.
2016: Charlotte really enjoyed being flea combed!
2015: The Swimmers, house panther division.
2014: No entry.
2013: No entry.
2011: I’m starting to think that Miss Molly has a bit of a crush on little Charlie Peppers.
2010: They would LOVE to have the run of the house, but they’re still little guys so it’ll be a few more weeks before that happens.
2009: I accidentally brushed Terry with one hand and woke him up, and he blatted at me until I started petting him, and then he purred and blatted some more.
2008: No entry.
2007: Peyton puts his paws in the air like he just don’t care.
2006: Where else is there to sleep in this horrid, uncomfortable house where there are three warm and cozy cat beds to every single cat?
2005: Also, there are little cinnamon footprints around the food bowl, because little Sugarbutt gets SO HAPPY when he’s eating that he has to dance around in the cinnamon and then drag it all over the r