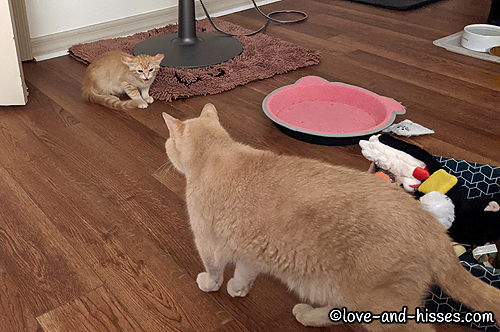 Newt came in to check out the kitten food situation, and when he headed for the door Theo Pesto started hissing at him. All the permanent residents are a little nervous about hissing kittens, so Newt wouldn’t go around Theo to go out the door. I had to go open the door all the way before Newt would go out. The kittens’ food and litter box is in my room for now (until they go home), and so the kittens think my room is THEIR domain, but the permanent residents would beg to differ. 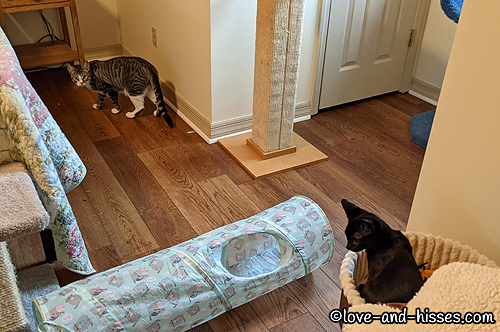 Charlie likes to hang out under the bed and watch the kittens. 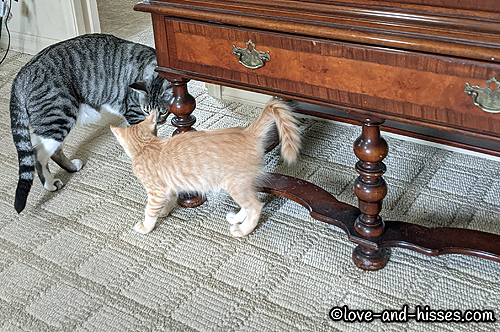 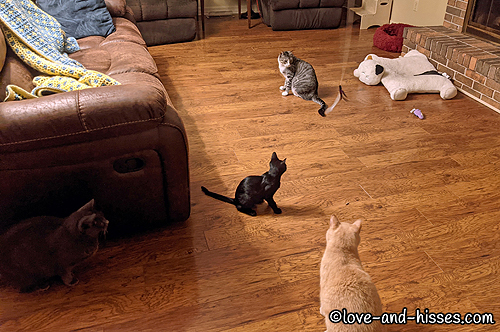 Fred got out the Da Bird teaser, which brought Newt, Charlie and Jake running, and Sofia Soy Sauce had to see what was going on. 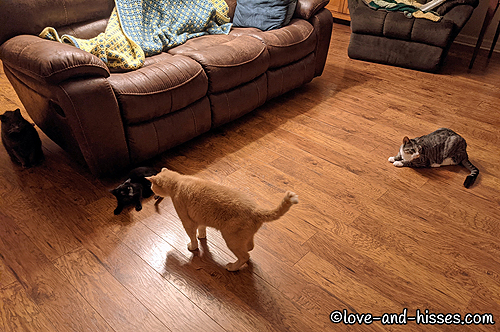 She got hissy with Newt, and Newt said “You want a piece o’ me?” and she said “No thanks, I’m good!”

If you didn’t get suspicious about the fact that I have moved Theo and Sofia’s litter box and food into my bedroom, you shoulda. They’re not allowed into the foster room anymore (I moved all their favorite toys into my room as well) because the room has new residents. 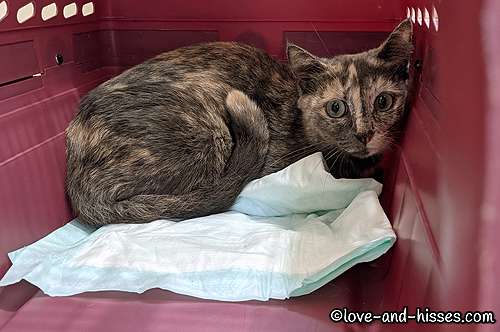 No, she is not pregnant. 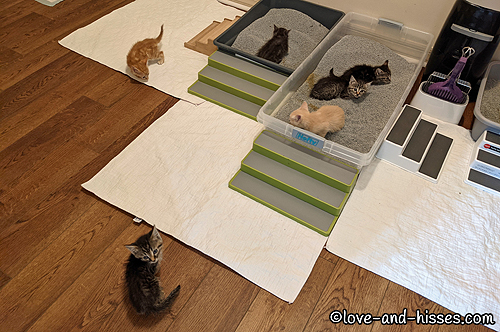 Because she came with 6 kittens! 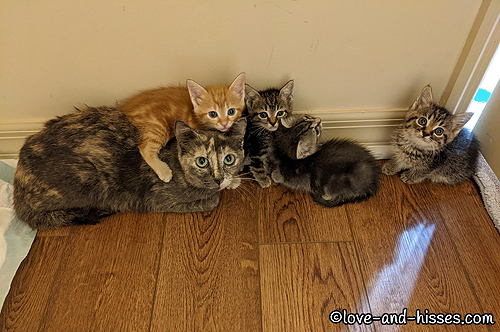 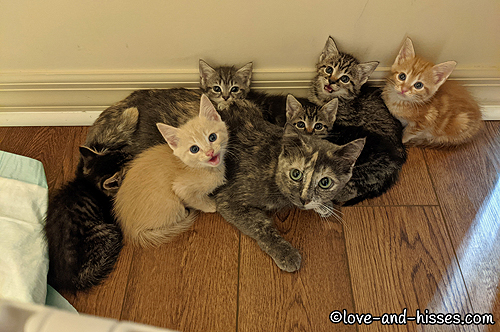 Those kittens are highly suspicious of me. 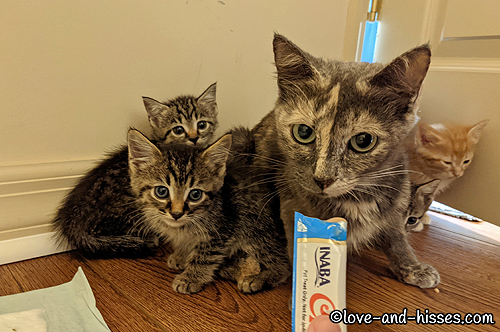 But I know how to make friends. 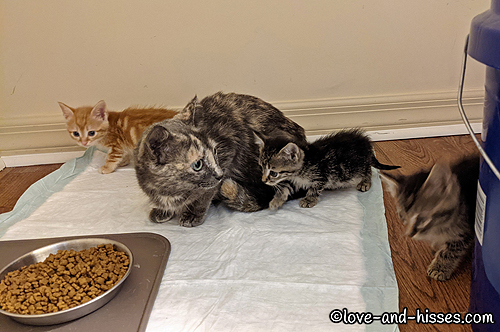 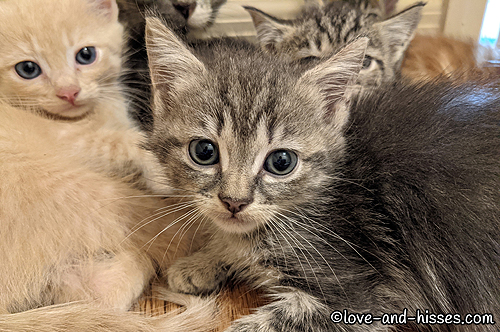 The very most suspicious is this gray girl kitten. 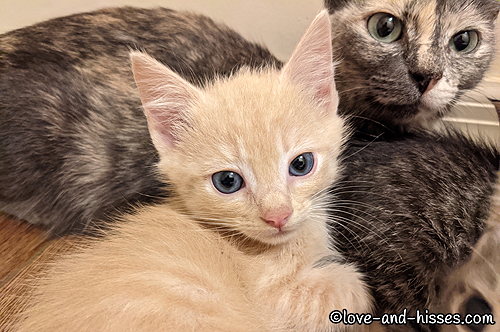 Buff boy is suspicious, but thinks I might be okay. 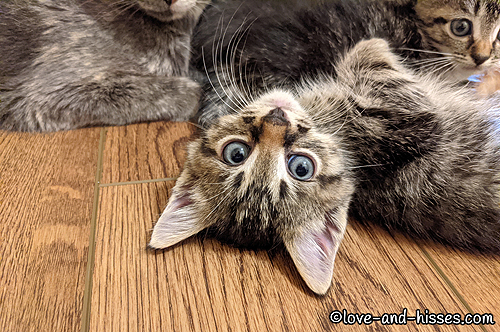 And brown tabby boy, it turns out, is kind of a flirt. 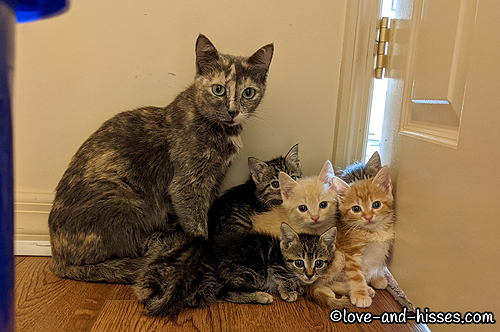 They decided that the best place for now is behind the door in the litter closet, but I’ve already seen them exploring the foster room, so I’m sure it won’t be long before they’ve moved from the litter closet to the room with all the beds and toys.

*I stuffed a cloth between the door and the doorjamb so the kittens won’t get their legs caught.

The story is that Mama and her kittens were trapped near where they’re currently building the Facebook Data Center in Huntsville. It was initially thought that Mama was feral because as soon as she saw people she was GONE every time, but once she was trapped it turns out that she’s nervous but very, very sweet. (I brought them home Monday morning, and by Tuesday mid-day Mama was coming over to be petted if I spoke to her.) The kittens are 6 1/2 weeks old, eating on their own along with nursing, and use the litter boxes with very few accidents so far.

We have a naming theme (it is not a Facebook naming theme; we are not naming a kitten Zuckerberg). I just have to decide which kitten gets which name, and will likely post them on social media later today (which means they’ll be here on the blog tomorrow morning.) 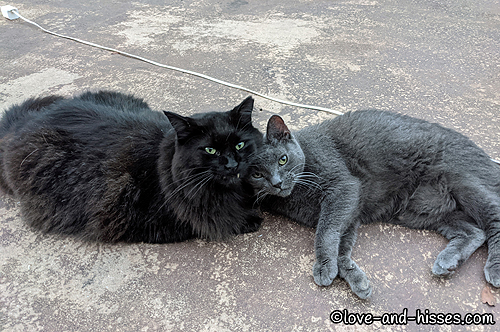 Khal and Jake have a snuggle. 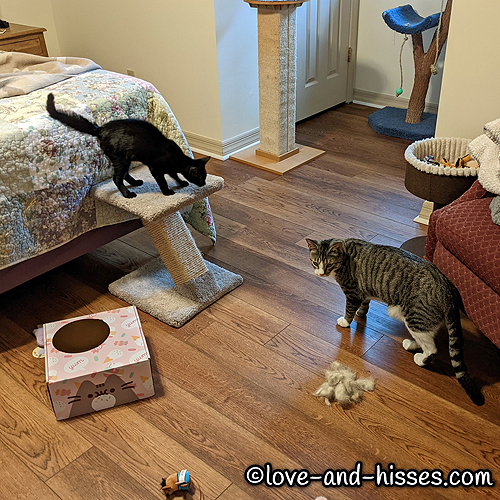 Look at Sofia Soy Sauce’s semi-floofed tail! She’s all “No, Uncle Charlie. No room on the bed for you!” Uncle Charlie so wants to be friends with these kittens, and they are mostly still in the hissy my-Mama-said-don’t-talk-to-strangers phase. 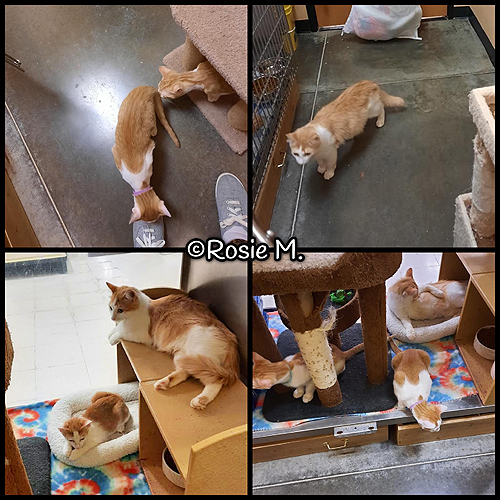 If you’re curious about how Molly and the boys are doing at Petsmart, here are some pictures courtesy of volunteer Rosie. They’re still a bit tentative, but I don’t think it’ll be long before they’re racing around like the rest of the kittens in the cat room. In that top left picture, Christopher Chutney was sniffing Rosie’s sneaker while Cliff (who totally looks like he could be one of the Dippers) was sniffing from behind. (Thanks Rosie!) 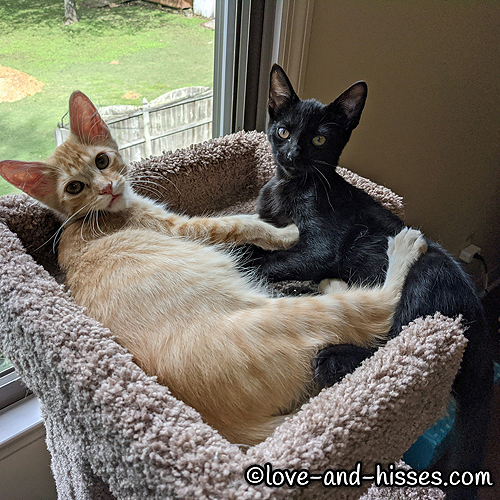 “What?” My assistants are taking a break from filing, apparently. 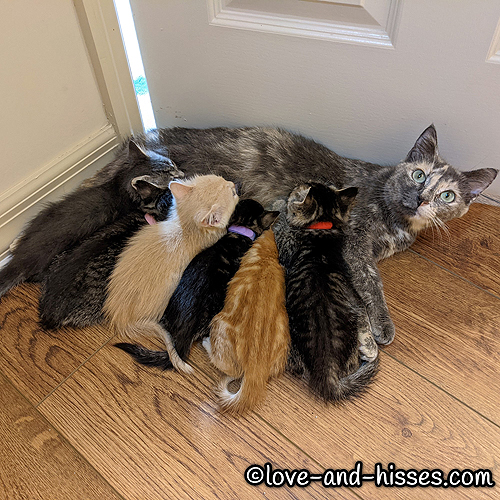