Question for when Robyn gets back, or if anyone wants to chime in: we waited until our kitten was 6 months old to have him neutered. Our vet wants him in a cone for **14** days. A kitten. In a cone. I am only asking who else has had these instructions, and of those who did not, did you have problems with the surgery area rupturing?

I’ve never had to cone a kitten for that amount of time since our vet uses surgical glue to close incisions (and I have never had a kitten mess with their incision). Hopefully someone else will chime in here, but if it were me, I’d probably take the cone off after a couple of days and just keep an eye on the kitten. (Okay, that’s a lie – I’d probably take the cone off immediately and keep an eye on the kitten. But I’m a rebel.)

Y’all, please chime in here – kittens in cones? Anyone done it for fourteennnnnnn days?

HA. I love that idea!

Can I just say that it makes me a little sad that, on the social media posts, you have to add something like “I check their collars every day, so they’re not too tight.” But I know if you don’t, you’ll have all sorts of accusatory strangers jumping all over you for kitten endangerment!

I try to remember to include information in the caption that deflects the panicked/judgmental/angry comments because those comments drive me nuts sometimes. And, really, those comments tend to come from people who have no idea who I am or what Love & Hisses is about – they just happened to wander over from someone’s share, and since they’ve never heard of me before then clearly I did not exist until that moment and need to be schooled in how to Do Things Right.

(How I deal with those comments generally depends on my mood – I am doing my best to at least view all the comments and will block any nasty or trollish comments and answer questions (and I have done SO MUCH banning lately), but when there are 1,000+ comments on a single post, I know that I miss a lot of them. I sincerely do not know how Hannah Shaw – The Kitten Lady – deals with all the nastiness that comes her way. She is so much more patient than I could ever hope to be.)

(Also, those of you who answer questions from other people on my social media (usually Facebook) posts – I APPRECIATE YOU!)

I remember suggesting this theme! I’m a chemist, and I love science names for kitties.

(I promise, when you guys suggest great names/name themes I might not use them right away, but I get around to them eventually!) 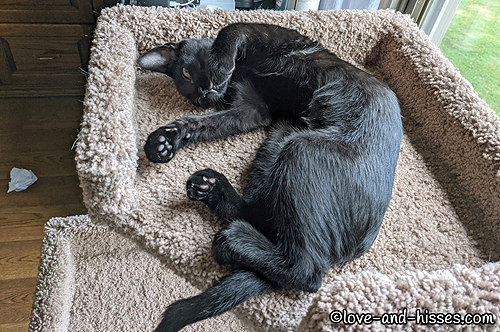 Sofia is such a gorgeous slinky thing. 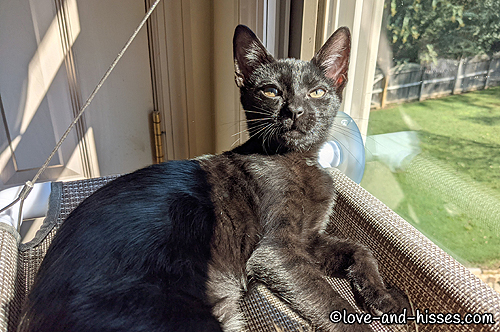 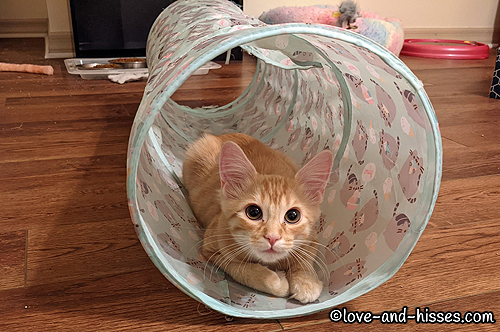 And Theo Pesto’s awfully cute too!

(They’re headed home next Wednesday. I’m going to miss that silly duo, but am so excited for them and their new family!) 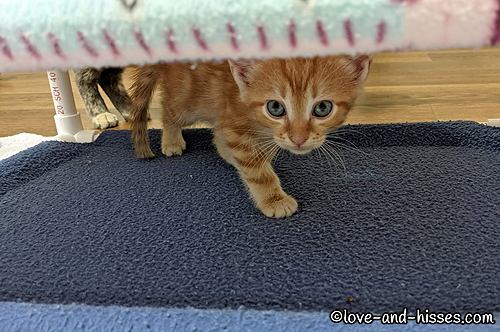 I love how this picture of Ozzy… 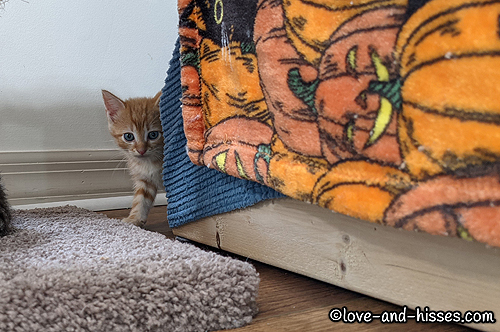 And also this picture makes it look like he’s wary of me. In fact, that boy is just as friendly as his mama and will climb right into my lap without hesitation. 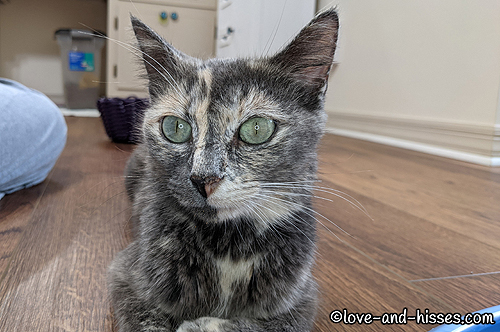 Maddy is so, so pretty. 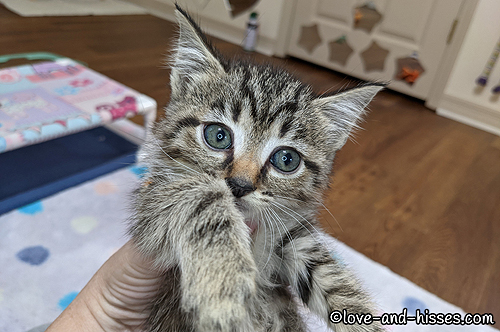 Ruthy, however, is not so friendly. She’s not as NOT friendly as Carli, but she does tend to run from me. 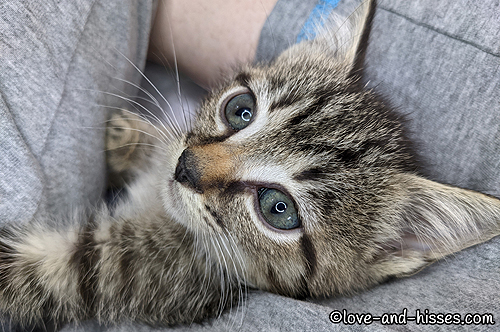 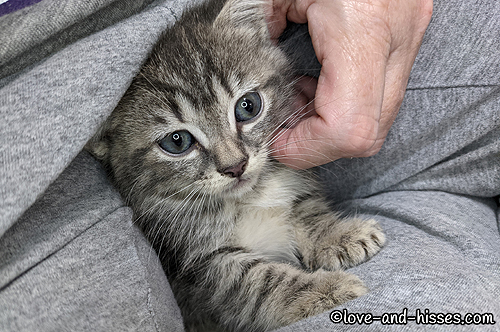 Then I snuggle with Carli for a bit. (Carli would deny it, but she purrs for me.) 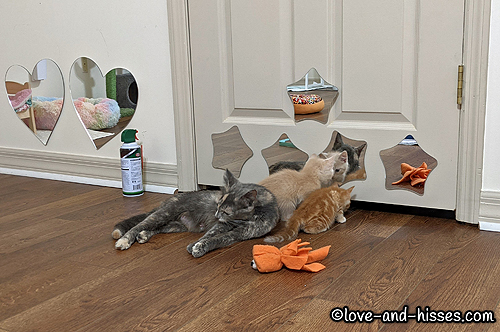 Ozzy and Sammy heard Theo outside in the hallway, playing. 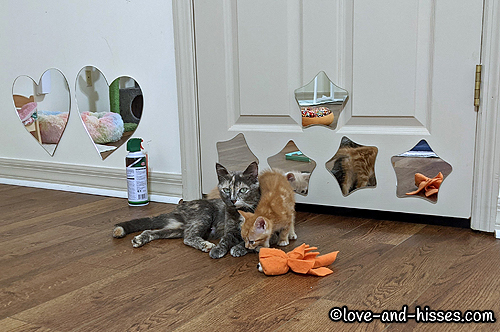 Maddy’s all “Why is this child sniffing my paw?” 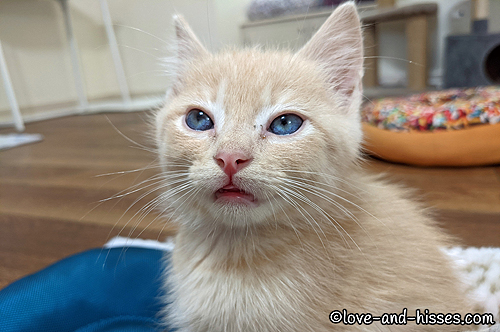 We have a lights-on-no-one-home situation here with Sammy.

I’m hoping to get the page for this bunch up and running this weekend – including their weight chart. But I can tell y’all that everyone (including mama Maddy) has gained weight, and the tiniest kitten (Nikki) has passed the one-pound mark. (Sammy remains the biggest kitten, at 1 pound, 12 ounces.) 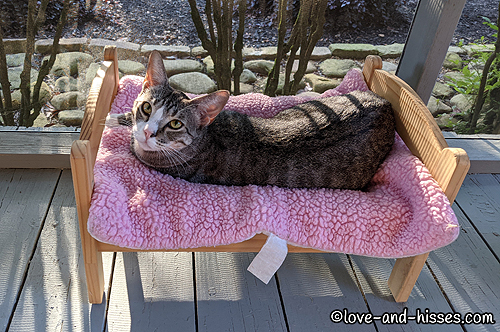 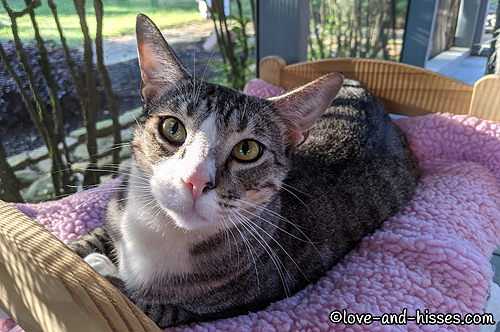 He is just SUCH a good-looking boy! 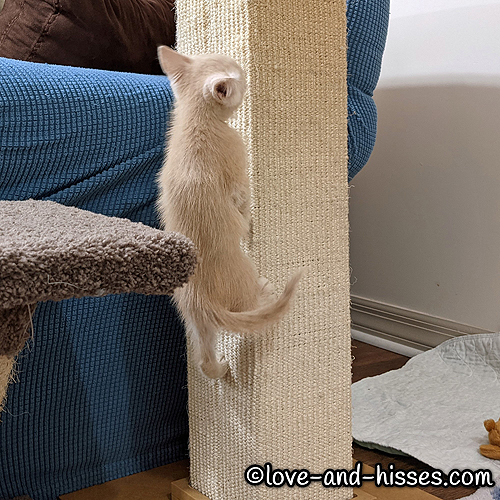 I’m out of town for a few days so Love & Hisses social media will be very quiet. Posting will resume when I get back later this week! 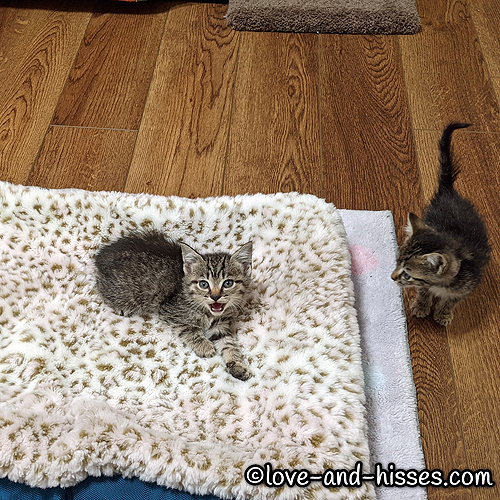 Barry Beryllium is all “LADY IT IS TIME FOR BREAKFAST” and Nikki Nickel is all “Ooooh, that’s a good idea!” 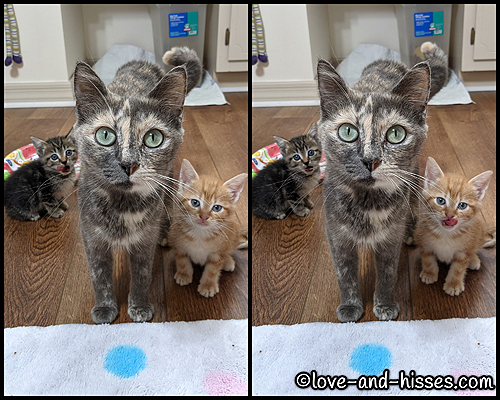 It is #Thlurrrpsday, after all. (That’s brown tabby Nikki on the left and orange tabby Ozzy on the right – with mama Maddy just keeping an eye on me in case there’s more food headed her way.) 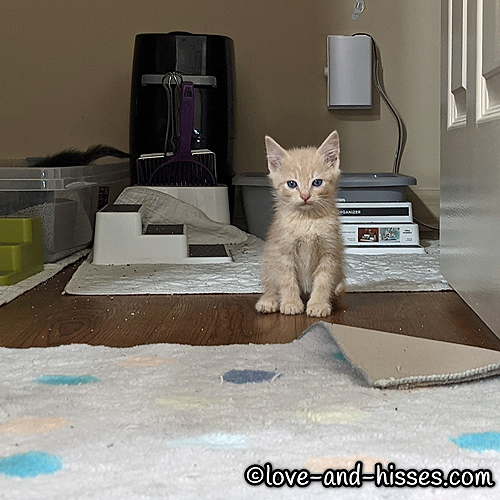 Sammy Samarium is keeping an eye on me. 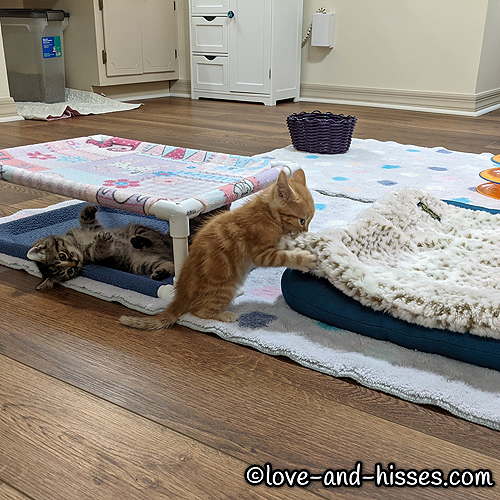 Ozzy Osmium is all “Oooh, this smells fabulous!” 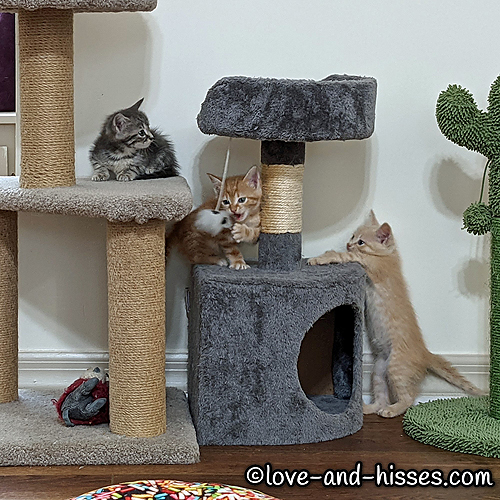 Carli, Ozzy and Sammy are enjoying the little cat trees! 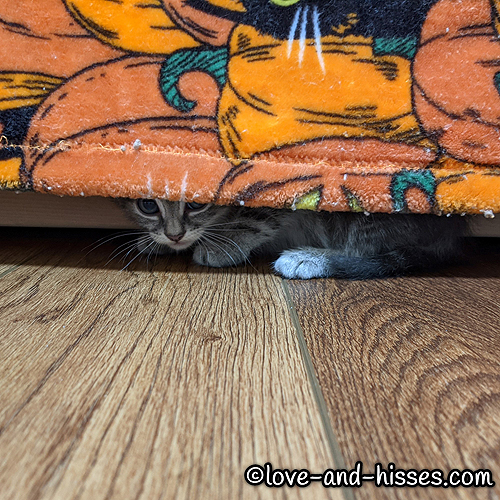 Carli Calcium is still suspicious. We’re making headway, though – when I go into the room, I pick her up and cuddle her for a few minutes. She’s not sure what she thinks about that, but she does purr! 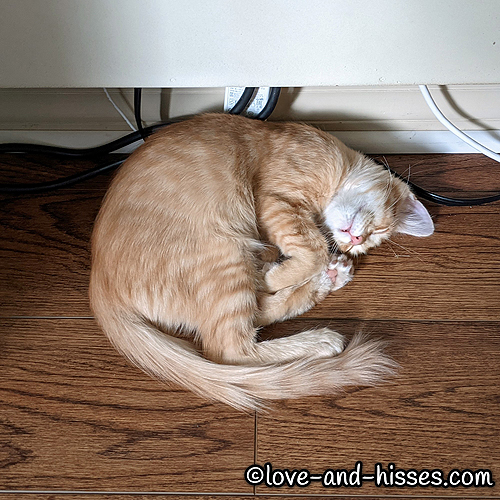 Good night innernets. (Theo Pesto likes to sleep under my desk at my feet when I’m at my computer. He makes an excellent foot rest.)