In case you didn’t see it on the Facebook page Saturday, this happened: This leaves Zuke and Ambercup at Petsmart waiting for their people to come along. They’re handling their stay at Petsmart just fine – Teresa posted a video of them playing before she went in to clean, and I shared it on the FB page.

I have an update on a former foster! This time last year, this guy was charming us all: That is, indeed, the Sherman formerly known as Trader Joe. Lilly drove all the way to Alabama from Wisconsin to adopt him, and on the way home she sent a picture that makes me laugh every time I look at it. Now here he is, all grown up and gorgeous! Sherman turned 1 on August 6th and he continues to get more handsome and more floofy! His fur is still kitten soft and SO luxurious! He is VERY long and lean and I think he’s going to keep growing for awhile. He’s still got a lot of kitten energy and he makes me laugh all the time with his antics. He doesn’t meow very often but he does make a lot of other noises all the time–lots of chirps and trills and talking (especially when he’s feeling “zoomy”!). The sad news is that Charlie the tripod (pictured above) passed away just a few days after Sherman’s birthday. It was unexpected to some degree and totally devastating. Charlie was Sherman’s #1 kitty friend and since his passing, Sherman has been trying to win over the girls…without much success! 🙂 The girl kitties think he’s still too much of a wild boy! At the end of the day, though, when he’s all tuckered out from his own shenanigans, he can sometimes convince Pearl to cuddle with him. I still can’t believe I drove all the way from Wisconsin to Alabama to fetch little Shermie…but it was TOTALLY worth it! He is a one of a kind kitty–so funny, such a nut, so handsome, and SO dang sweet! Oh and in case you’re wondering…his OFFICIAL, formal name is Sherman Joseph–a nod to his beginnings as Trader Joe! 🙂

Thank you so much for the update, Lilly – I sure do love seeing his sweet, gorgeous face. I knew he was going to grow up to be beautiful, and he did NOT disappoint!

By the way, you can follow the adventures of Sherman, Pearl and May (and Lilly!) on Instagram. That’s Skinny Pete, Combo, and Badger. Kathie reports that they are doing great! Kathie said that it’s hard to get pictures of them – they’re at that age when they’re always on the move and don’t sit still for a second. They’re fat and happy little muffinheads and love the feather teaser, laser light, and climbing the cat tree.

So, I have actually been back from Myrtle Beach since last Tuesday evening. I had pre-written and scheduled posts through Friday because I’m always a bit discombobulated when I get back from vacation, even when the vacation is only a few days.

On Thursday I took the Swimmers for their spay and neuters. They came through surgery just fine, and they should be headed off to Petsmart soon. They’re a quartet of super-sweet, super-friendly, extremely confident kittens, so hopefully they won’t be at Petsmart long. 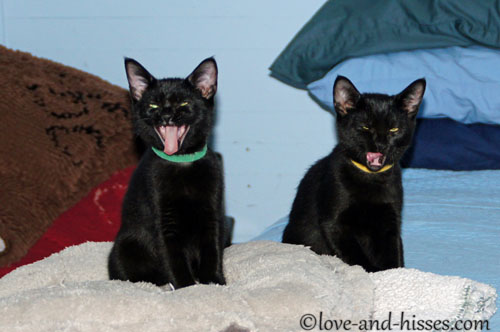 Louganis and Phelps, guffawing at their own jokes. 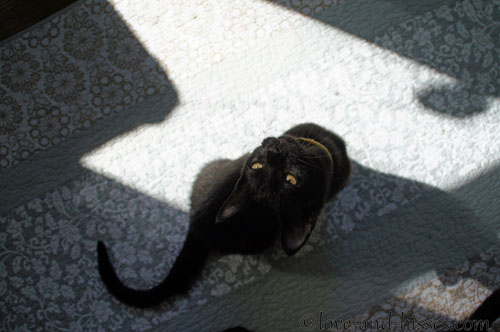 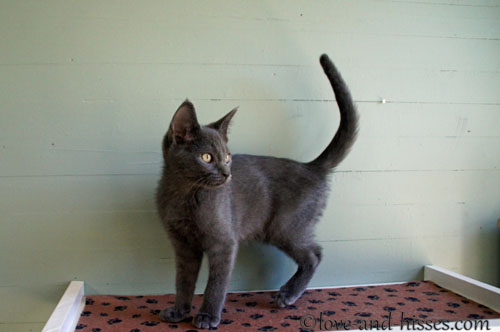 These kittens walk around with their tails straight up in the air at all times. I’m not kidding when I call them confident kittens. Very little scares them! 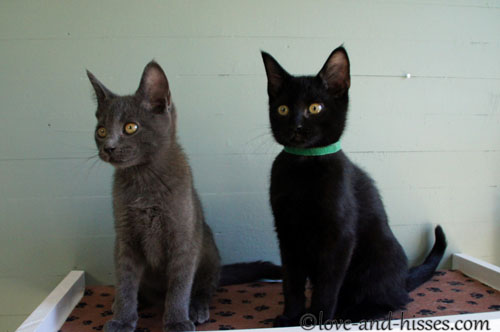 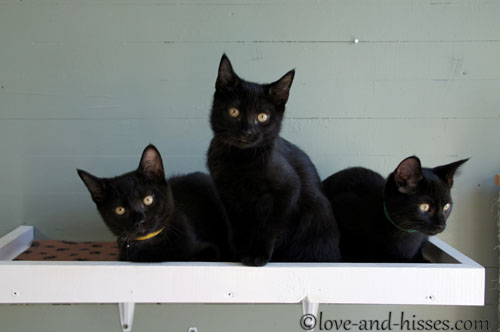 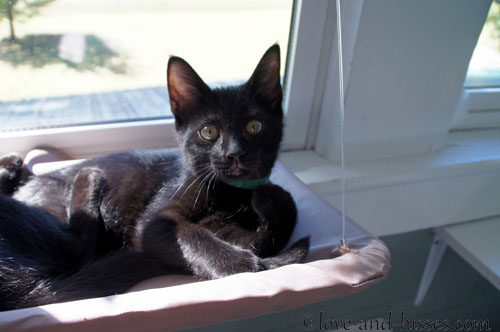 Louganis is amazed by those window beds, too.

The kittens jump from the top of the cat tree to the window beds, and the beds don’t budge. They are the Sunny Seat cat bed, and you can find them at Amazon. I can’t swear to it, but I’m pretty sure I’ve also seen them at Petsmart and Petco. They’re rated to hold up to 50 pounds; I can’t speak to that, but I can tell you that Tommy used to sleep in one. He weighed 14 pounds, and he got into the bed by jumping up into it pretty hard, and it never budged. 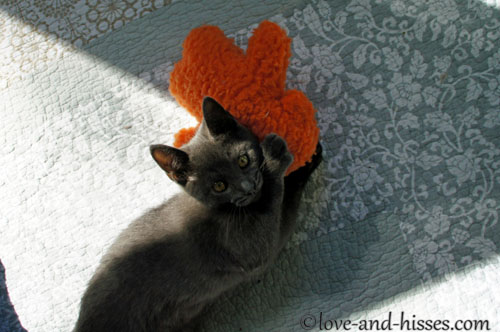 Spitz, showing the orange teddy bear who the boss is. 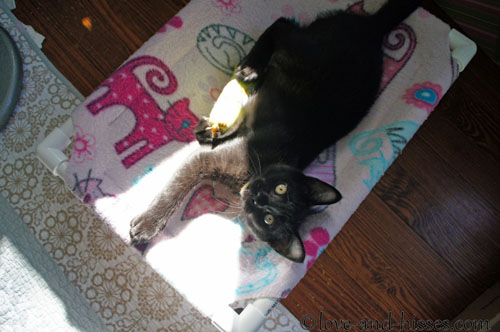 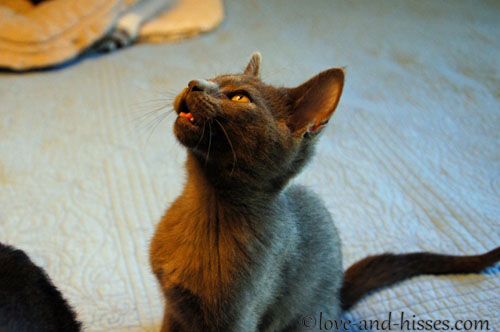 Spitz likes to talk to the ceiling fan. 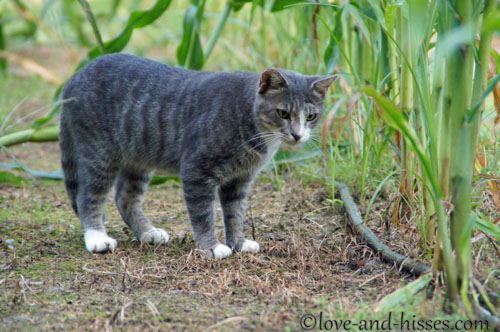 This picture is from July, before we harvested the corn. Archie was following me around, and when I turned the water on, the hose made a hissing sound and Archie found it fascinating and a little scary. 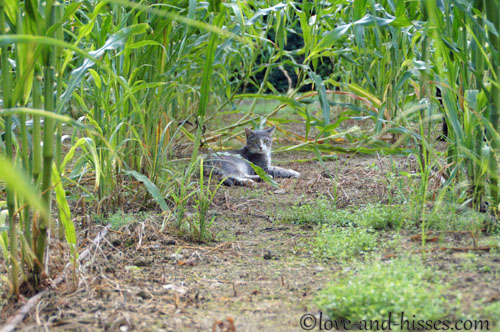 Archie of the corn.

Previously
2014: No entry.
2013: No entry.
2011: I’m starting to think that Miss Molly has a bit of a crush on little Charlie Peppers.
2010: They would LOVE to have the run of the house, but they’re still little guys so it’ll be a few more weeks before that happens.
2009: I accidentally brushed Terry with one hand and woke him up, and he blatted at me until I started petting him, and then he purred and blatted some more.
2008: No entry.
2007: Peyton puts his paws in the air like he just don’t care.
2006: Where else is there to sleep in this horrid, uncomfortable house where there are three warm and cozy cat beds to every single cat?
2005: Also, there are little cinnamon footprints around the food bowl, because little Sugarbutt gets SO HAPPY when he’s eating that he has to dance around in the cinnamon and then drag it all over the room.