We initially made the appointment to say goodbye to Kara for this morning because I wanted one more night with her. But she had such a good morning yesterday that rather than take the chance she might start to go downhill, we decided yesterday afternoon was the time. (She’s been suffering from Chronic Renal Failure for a couple of years now, as mentioned in this post.)

She left us as peacefully as we could have hoped for, the very best girl to the end. This post is my tribute to her.

Kara came to us as our foster in 2008, hugely pregnant. She was the first pregnant cat we’d ever fostered, and so we were both excited and nervous about the experience. We thought we might be in for a bit of a wait, but the very next day after we got her, Kara went into labor. In the course of just a few hours, she had four tiny kittens. (We were watching Survivor while she had her kittens, and I surprised to this day that we didn’t name the single boy kitten Jeff Probst.) She was a wonderful mama to those kittens, always vigilant, though we had to make a point of not going into the room if we knew the kittens were nursing. She was always so excited to see us that she’d run over to greet us and leave her kittens complaining.

As they grew, she continued to be a wonderful mother to them, and we were surprised that she never completely weaned them from the milk bar. They were nearly her size before they left us, and it amused us to no end to see those giant kittens nursing. Kara’s kittens left when they were about 4 months old. Kara was with us a bit longer, and then she went to Petsmart. In my memory she was at Petsmart just a few days, but upon looking back through pictures, she was actually there for nearly two weeks before we decided we missed her too much, and Fred brought her home.

(A note: at the time we thought we were going to rename her, but she remained Kara her entire life. We nicknamed her Sheriff Mama, but when we talked about her to each other, she was always Kara or Mama.)

Kara settled back into life with us as though she’d never left. I had high hopes that she’d help with the mothering and care of foster kittens, but she wanted absolutely nothing to do with any kittens, not ever. If any kitten made the mistake of approaching her, they were told in no uncertain terms that they needed to find somewhere else to be. She didn’t actually have much use for the other permanent residents either, though she and Newt had some sort of mutual respect society going on – they could often be seen sniffing noses – and she tolerated Jake’s occasional need to mind-meld. When we lived at Crooked Acres, we had an electric fence around the back yard. Most of the cats needed to wear collars that responded to the electric fence, Kara included. Before Fred would open the back door in the morning, he’d put the collars on the cats, and when he’d hold Kara in place to put her collar on, Jake would come over and rub against her because he knew she’d put up with it. She was the absolute sweetest girl, but she was also the most frustrating. When we lived at Crooked Acres, she was constantly testing her collar. The instant she realized that the battery was dead, she’d be over the fence and gone until we realized she was gone. (But she always came when we called.)

She considered herself our protector – that’s how she earned her nickname Sheriff Mama – and she absolutely hated it when she could see us on the other side of the fence but couldn’t get to us. She’d glare at us and walk back and forth, her tail whipping, and give us all kinds of hell. She was always testing everything – when we first put up the cat fence here at Shady Cove, she nearly immediately found a way out of the back yard, under a spot in the fence where the ground had washed away. We thought it was too small to worry about, but she was a tiny cat and squeaked through with no problem. And as at Crooked Acres, the instant we called for her, she’d come to us.

She absolutely adored being outside, and I loved looking out to see her striding across the back yard. Even when it was cold outside, she’d curl up in one of the cat houses and watch yard. She was just the sweetest girl. Everyone at the vet’s office just absolutely fell in love with her, she was always just so SWEET.

She wasn’t sure what to think about our move from Crooked Acres to Shady Cove. At that point, Crooked Acres had been her home for nearly 10 years and she knew the ins and outs of life there. But she adapted quickly to our new home, and found some new favorite places. It was hard for her to not be able to go outside for a few months, but once she was allowed out and she discovered the joys of tasty, tasty chipmunks, she was all in. 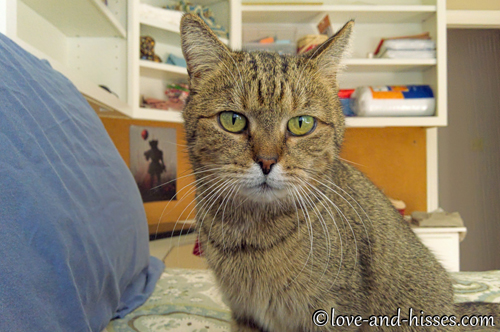 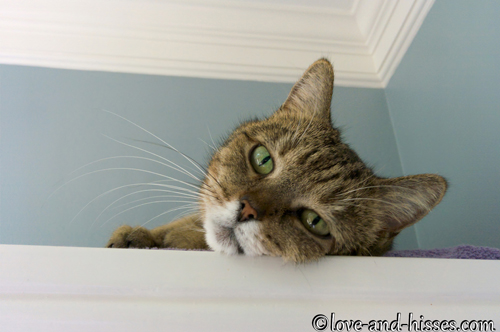 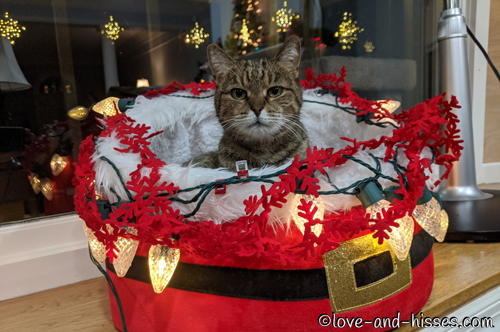 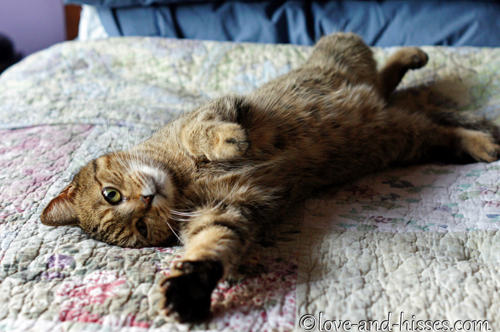 We could do just about anything to her – she never fought being medicated, she loved having fluids as long as you sat next to her and petted her, you could pick her up and flip her onto her back, and she’d just purr and purr and blink up at you. Even in this past week, she still went outside to run the perimeter of the back yard, she killed a chipmunk as recently as two weeks ago, she told Archie to watch his manners; she never stopped sheriff-ing. She never stopped loving us. She never stopped doing her best to keep us safe. 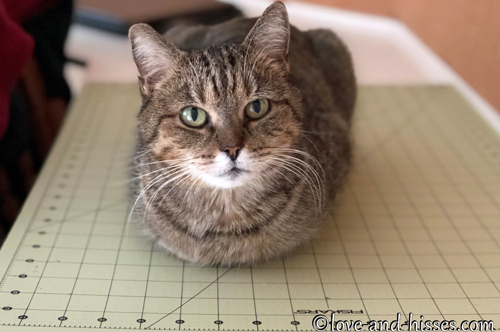 And now her watch has ended.

They accept donations by mail (check or money order), by phone (Mastercard/VISA), or at their Paypal address challengershouse (at) mchsi.com