Mariette looks similar to our Viola, the one Niblet foster we adopted ourselves, and that reminded us to ask if you’ve ever had a bobtail or manx permanent resident? They are very, very special! *hint hint*

I’ve noticed that Viola and Mariette look like they could be sisters!

Our dear departed Mister Boogers was a bobtail, actually. And what he lacked in tail, he more than made up for in personality. He was chock-FULL of personality, that one. 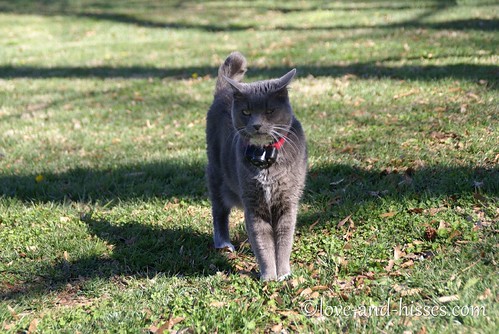 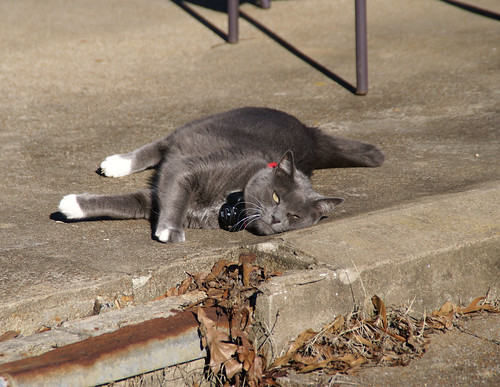 And one of my favorite pictures of him: I can’t imagine a marble countertop being warm. they use those for fudge because they tend to stay cold.

why are you torturing those poor cats by making them sleep on cold marble and not cozy, snuggy catbeds Robyn? 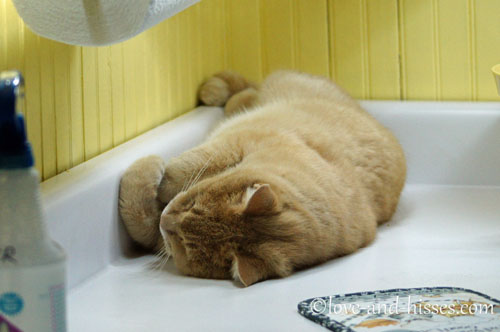 MARBLE. Does that really look like marble? Because if so, my photographic abilities are way better than I thought they were. That’s not marble, it’s whatever the cheapest, crappiest countertop material is. I dream of replacing that countertop (and, okay, all those cabinets), but it won’t be anytime soon. (Especially with Stinkerbelle pretty much living on top of the cabinets!)

But aside from that, that corner where Newt likes to sleep is probably the warmest place in the kitchen (well, aside from the oven, maybe). Which is why he sleeps there, of course. I’d like to say that I’ll never put a cat bed on the kitchen counter, but I am SURE it’s only a matter of time.

You have to wonder about those tails….seems the extra long ones make up for the “no tail” kittens. there was a weird tail memo going on with this crew 😉

I think the guy in charge of tails in the kitten factory was sleeping on the job, and when he realized he’d forgotten one kitten’s tail and only given a little nub of a tail to another kitten, he panicked and over-tailed the rest of them!

That is really well done!

We’ve all seen cats inside boxes, but there are a couple new riffs on the theme here.

Love it! I really need to get a clear glass bowl and take it into the foster room. Those are my favorite pictures! Bath time for EVERYone! “They’re always LICKIN’ each other. Horrifying! I do not approve!” Grumpulous Dennis. Orlando and… I don’t know. Maria? Orlando shows that he desperately needs a claw trim. Is it time to fight? Corbie would like you to know that it was 70 degrees here yesterday, and there were NO complaints from him.