Frankie did not improve at all last week (in case you missed it, he was diagnosed as “probable leukemia” (the cancer, not the virus) on Tuesday), and Friday morning we decided to take him to our old vet in Athens for a second opinion and to see if the vet thought there was anything we could try. After an extensive examination and looking at Frankie’s bloodwork results, the vet said that he wasn’t sure that he agreed with the diagnosis of leukemia, but that Frankie’s body was clearly shutting down. Even though he was on an antibiotic, he had a fever of almost 106. The vet said that even with hospitalization and IV medication, he didn’t think there was really a chance Frankie would pull through. So we made the decision that it was time.

He went quickly and peacefully. This post is my tribute to him.

Frankie showed up in mid-January 2017. I was in bed and could hear the VERY loud sound of a cat from the front porch. It was an unfamiliar voice, and so I got up to see what was going on. When I opened the front door, a little orange tabby came shooting out from under the bushes in front of the porch, with Archie in hot pursuit. The little orange cat ran so fast that I couldn’t really tell where he’d gone, and though I called and called, he didn’t come back.

About a week later, Fred and I were getting ready for bed, and he said “There’s a little orange cat in the side yard!” That was Frankie. 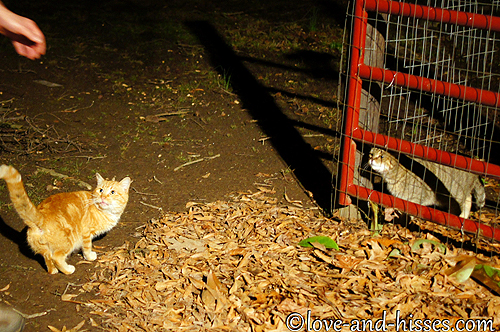 The night he showed up (and stayed), with Kara looking on from the back yard. 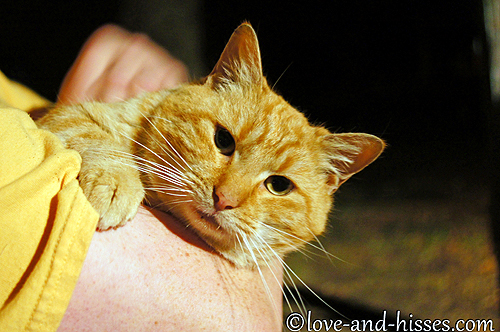 It was our intention to foster him briefly and have him adopted out via Challenger’s House, but a combo test showed that he was FIV positive. We were still going to try to find him a home, but as it turned out he was so sick that we decided it was best for him to stay with us. (He and Dewey became very good friends, very quickly.) Also, though he was a small cat – and so I assumed he was young – they aged him at about 6-7 years old. 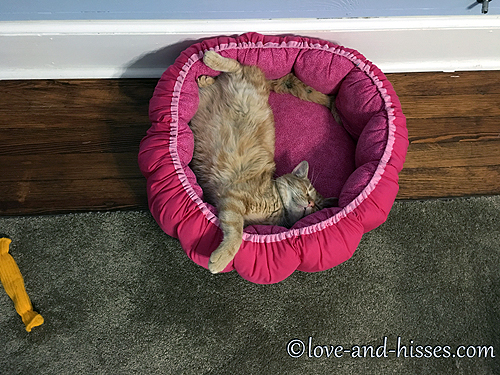 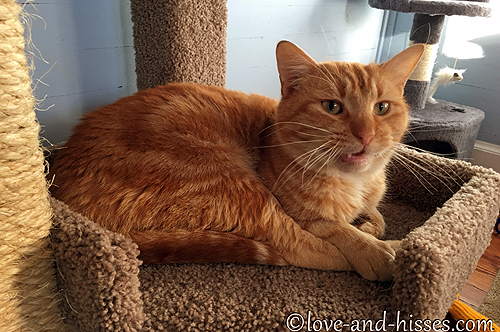 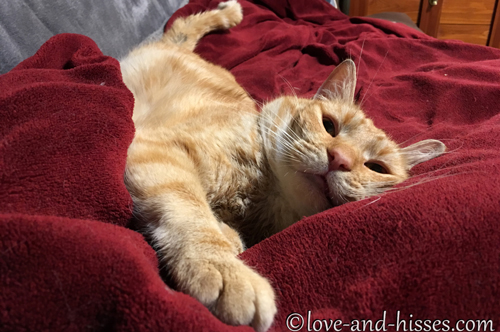 Poor Frankie was just a complete mess. He was anemic, had Bordetella, heartworms, and stomatitis so bad that the vet said his mouth looked like hamburger. Our first job was to get him past the Bordetella and get his mouth to a stage where he wasn’t screaming every time he yawned or ate. That took… a couple of months, I think. Then he had a bunch of his teeth removed, since that often solves the stomatitis issue. Unfortunately it didn’t, and he had to go back for more surgery to have most of his teeth removed. That still didn’t solve the issue, so after keeping him on steroids to heal his mouth, we put him on Atopica which worked to keep the stomatitis at bay.

At the time we decided to put him on Atopica, the vet pointed out that as an immunosupressant, it would likely end up shortening his life. But given the choice between a longer life full of pain and a shorter life with little to no pain, the decision was obvious. 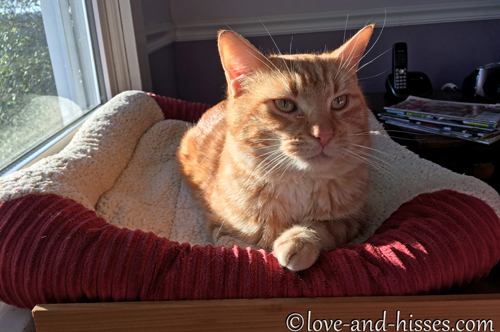 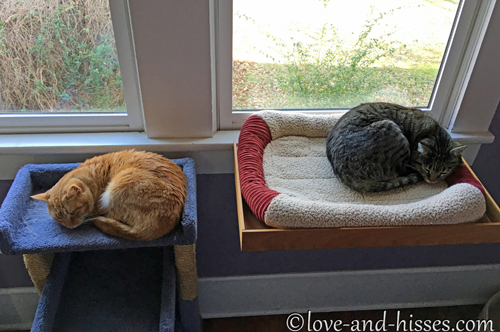 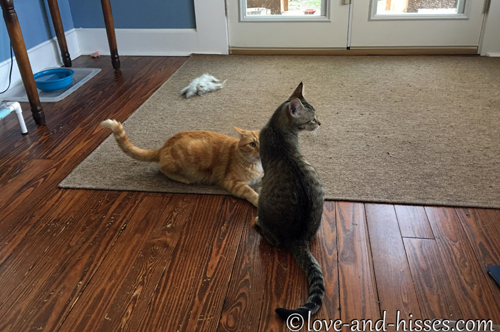 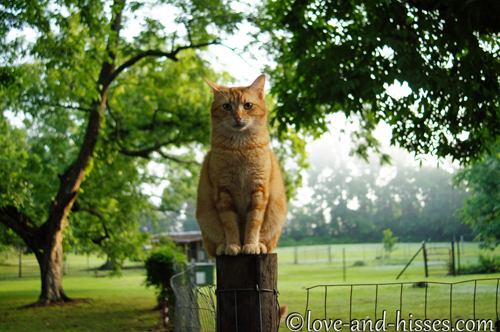 After some initial kerfuffles, Frankie settled among the permanent residents pretty smoothly. Except for Alice and Archie, Frankie got along with everyone pretty well. He was buddies with Dewey, and then Dewey decided he was a loner, and so Frankie became best buddies with Jake. 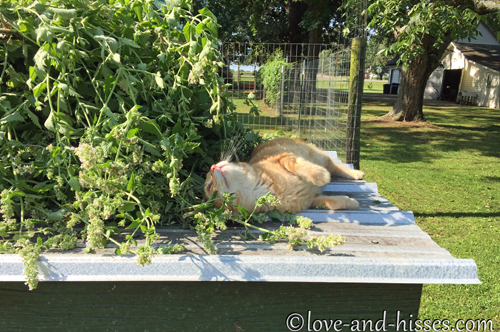 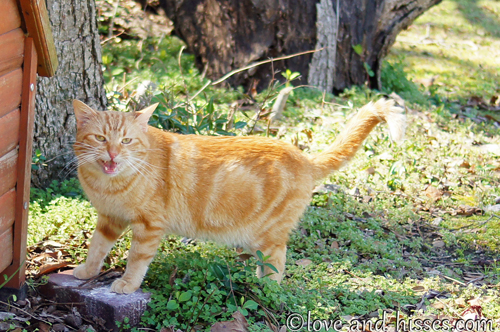 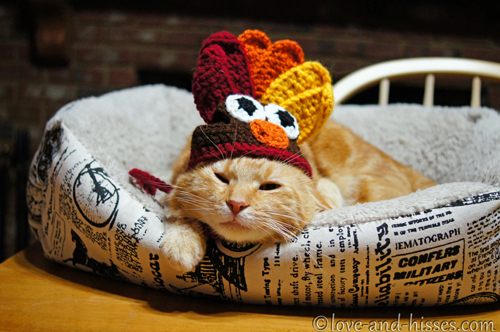 He absolutely loved his people – we could pick him up, flip him on his back, kiss him on the face, and he’d just look up at us and purr. He had the softest, silkiest fur and just loved to be petted and snuggled.

He handled the move from Crooked Acres to Shady Cove pretty well – not a lot phased that boy. 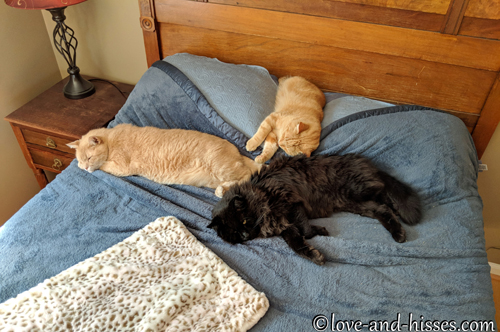 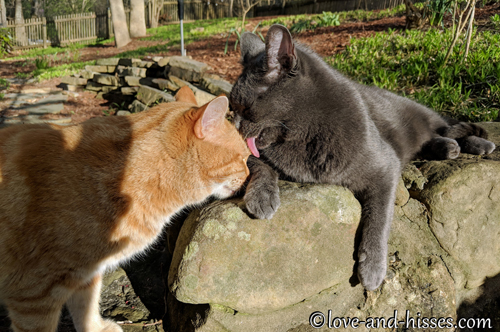 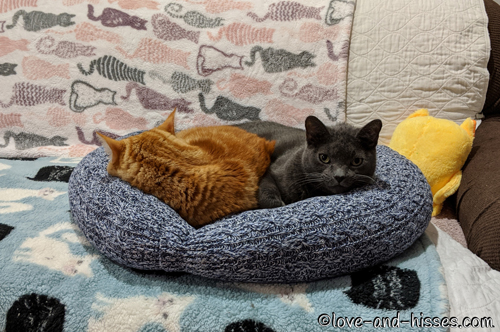 Ironically, a few people have asked who would be the sheriff now that Kara is gone. I would have said Frankie – any time two permanent residents got into a scuffle, Frankie was there in a flash to get in the middle and break it up. He was an excellent deputy (though he was fond of chasing the Sheriff and making her squeak) and would have been a fine upholder of The Law among our feline residents.

He loved: his people, his Jake, watching squirrels, hanging out in the sunshine, being kissed, pinning me down at night and melting me alive with his 10,000 degree body temperature, drinking fresh shower water off the floor of the shower, kicking litter all over the place, making sure Alice Mo knew that she had to share her Daddy sometimes (yo.)

The worst part of this is how very fast it happened. I’m writing this on Sunday afternoon, and last Sunday afternoon he was Frankie. Just hanging out, trying to put his butt on Jake, wondering where his crunchies were, wondering why the humans kept making it rain outside. And now he’s gone. I keep forgetting that he’s gone – I walk into my bedroom at bed time expecting to see him sitting by the window or tussling with Jake, and then I remember. I don’t think his absence is a surprise to the other cats – they all seemed to know he wasn’t well; Jake didn’t try to get him to play in the days before we said goodbye, and didn’t even ask for attention from him. But it’s still a surprise to me.

I am so glad that he showed up on our doorstep, so glad that he was ours for three short years. He was a sweet and amazing boy and while I wouldn’t have done anything different in this last three years with him, I am so very sad that that’s all the time we were given. 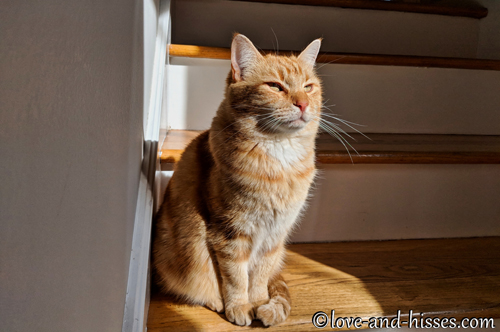 Goodbye, our sweet ornj boy. We miss you terribly.