A summary of the weekend: 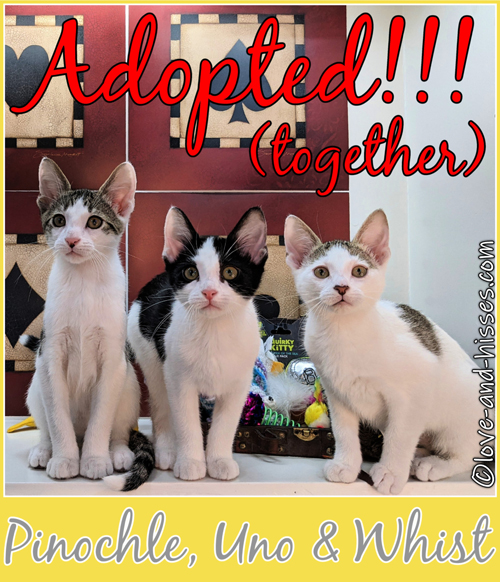 On Friday, Pinochle (now P-Kitty), Uno and Whist went home. I said in the post about it on social media that they were going to live in Florida, but ACTUALLY they’ve gone to live in West Virginia (Brian, their adopter, just accepted a new job in West Virginia). Not only did they make it to their new home safe and sound, but also they’re on Facebook, right here!

We had a quiet Saturday (okay, Fred and I went shopping and I am getting a new desk to replace the 20 year old behemoth I am currently typing at, but that’s only exciting to me I suspect), and decided to let Rummy and Slapjack out to run around the house. They were excited and confused, a little nervous and Rummy kept getting “lost” and crying until one of us would call out to her, and then she’d run to us (CUTE.)

We had a quiet Sunday morning, and then… 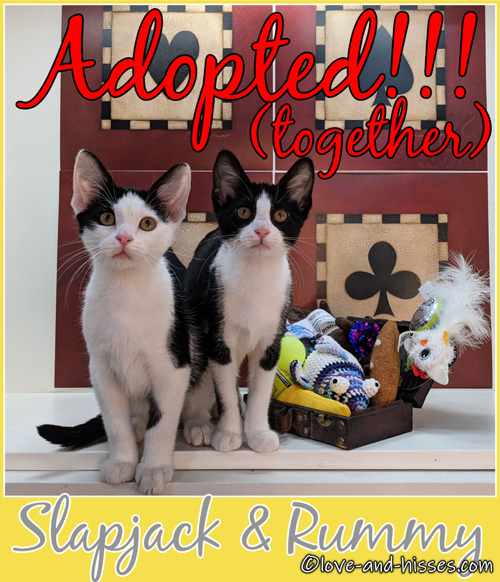 In the early afternoon, Rummy and Slapjack headed home… to Phoenix, Arizona! They’re keeping their names and they join two older kitty brothers, Cheeto and Franklin. THEY ARE ON INSTAGRAM, HERE, and FACEBOOK, HERE.

It is very very quiet around here, and no – we don’t have new fosters in place. We are taking a break from fostering for a bit. (I will continue to blog, though. We do have permanent residents, you know!)

Now sit back and enjoy the rest of my pictures of the Cardsharks, because they are one photogenic bunch. 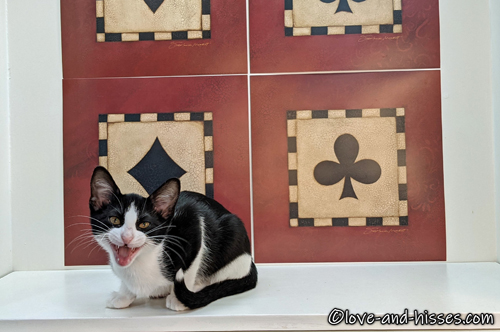 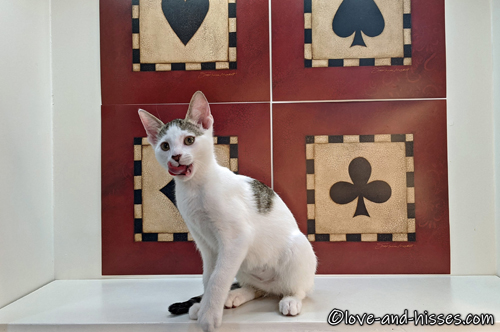 And Whist with a thlurrrp. 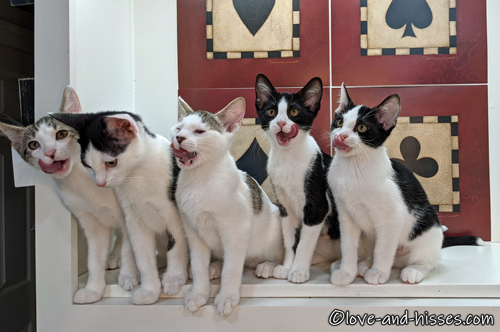 These thlurrrps brought to you by a syringe of goat milk (which they love nearly as much as Churu.) 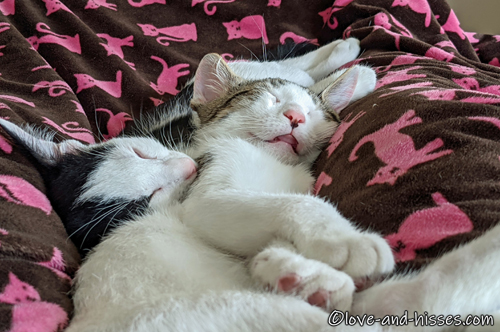 Slapjack and Pinochle at nap time. 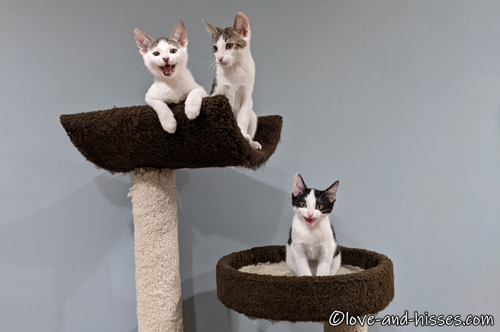 I love that both Whist and Uno were talking to me, and I also love Pinochle looking at Whist like “There she goes again.” 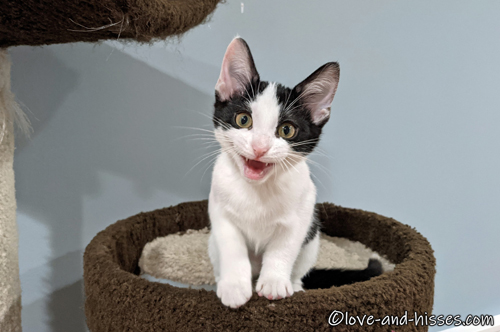 Uno with the twirly eyes. 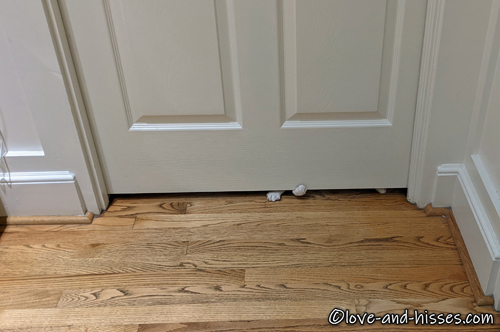 “You comin’ out of the shower soon, lady? We STARVINGGGGGGGG.” 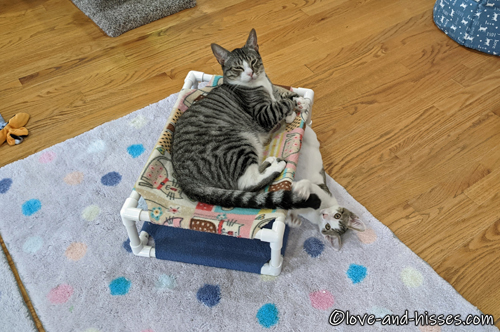 Charlie was flicking his tail and driving Pinochle craaaaazyyyyy. 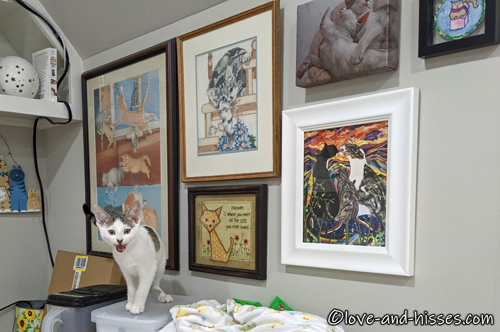 Whist doesn’t approve of how I’ve arranged the artwork in the kitten room. 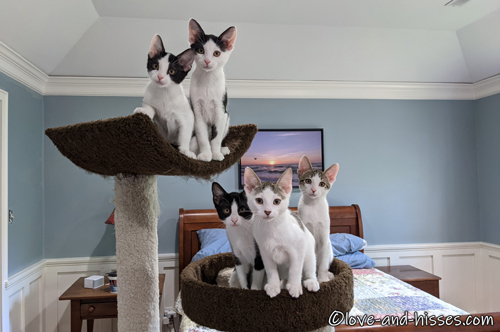 A shot of all 5! (Top: Uno and Slapjack. Bottom: Rummy, Whist and Pinochle.) 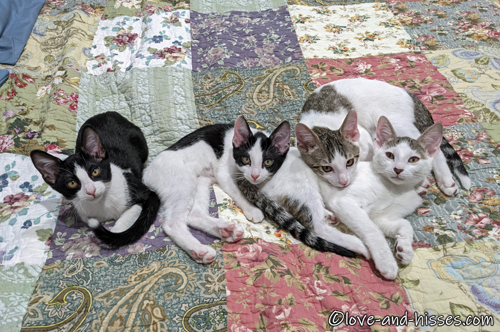 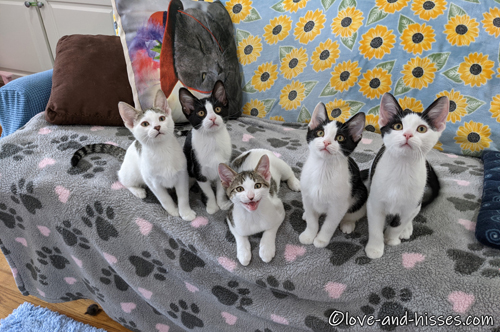 And the very last shot of all 5 kittens – Brian was literally sitting across the room filling out the paperwork for Pinochle, Whist and Uno when I took this picture. Left to right: Whist, Rummy, Pinochle, Uno and Slapjack. 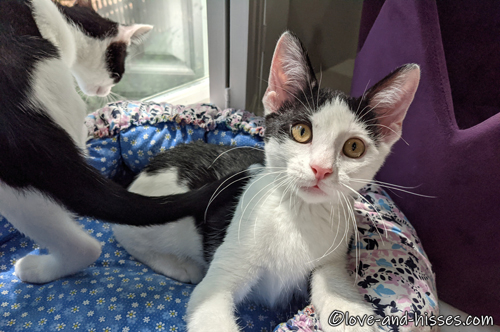 Slapjack in the sun. 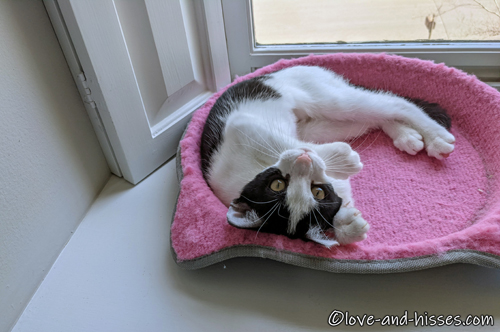 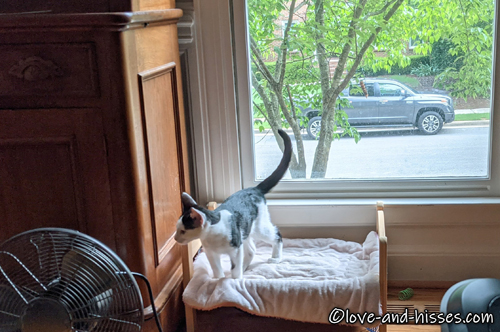 As mentioned, we let Rummy and Slapjack out into the rest of the house Saturday, and it didn’t take 10 minutes for Slapjack to discover the windows and heated bed in the computer room. 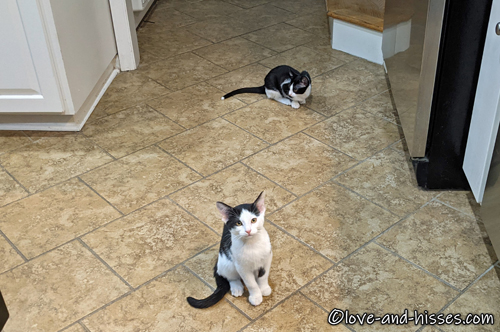 They knew IMMEDIATELY where their breakfast and dinner (canned food) is prepared, so Saturday evening I got this look from Slapjack while I was opening cans. I guess I wasn’t moving fast enough. 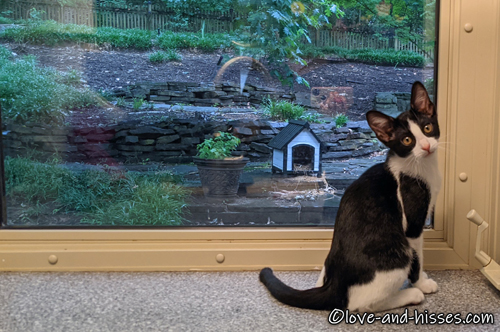 Rummy liked the view (there’s a bird feeder right outside that window, and she was obsessed with watching the birds flit in and out.) 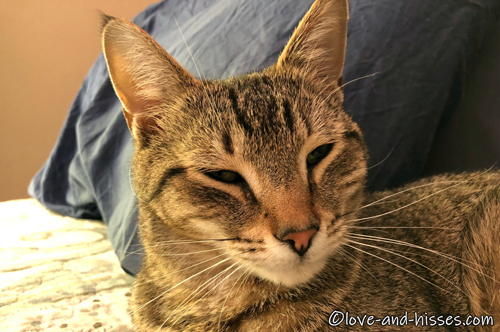