I have 3 cats. A female tortie, a male orange tabby and Flanery- a male gray tabby. The tortie is 10 years old. Orange tabby about 14 & Flanery is about 2 years. We’ve had Flanery since he came to us as a foster at 6 weeks old and only 6 ounces. He had some physical delays and I believe some Neuro issues due to the severe malnutrition and emaciated state he was in. Well all has been well up until night before last. Flanery attacked Lytning. Since then he has attacked her 3 more times, the orange tabby once, my son and came after me. He has this almost “war cry” howl and looks possessed. He’s calm on some Benadryl right now but the others are shut in my bedroom. Any thoughts? I’m taking him to the vet tomorrow. I just don’t know what is going on. My son has a deep 4-5 inch gash on his foot from Flanery.

What comes immediately to mind is that it sounds like Flanery could have been reacting to something he perceived as a threat, which could have caused the first attack, and in his mind it’s still a threat. Possibly something that happened right before the first attack? Maybe he have seen a strange cat or been startled by a noise? That’s all I can think of off the top of my head, but I suspect that some L&H readers will have suggestions – as well as possible suggestions on how to deal with the behavior. Readers, got suggestions? I’d love to hear them!

I saw a video of an Abyssinian mother with her litter – she was chomping those babies UP! (at about the 1:00 mark) The narrator described it as “wrestling” but I was really surprised by how rough it looked. Do your mama cats tend to play that roughly with their babies, or is it maybe a somewhat breed-specific thing?

Oh, my mama kitties definitely play that roughly with their kittens and it drives me NUTS. The first time I saw it, with Kara, I was like “OH MY GOD SHE’S TRYING TO KILL THEM!!!” and freaked out. Now I’m used to it – I’ve seen it happen with all the mama cats – but I still don’t LIKE it. It looks scary, but the kittens barely even seem to notice it and she doesn’t actually hurt them. I’m sure there’s some sort of explanation for it (“It’s a rough world out there, kid, and I’m going to teach you to defend yourself!”) since it does happen with all the mamas and their kittens, but I don’t know what it is. I will say that I haven’t seen it go on as long as it does in that video – it’s usually a pretty short grab-bite-bunny kick session.

And Tiny is killing me dead, when he watches his mother wrestle with the other kittens. DEAD. Oh, that face.

I was just scrolling through the “popular” screen on Pinterest and found this. Robyn you may want to change Khaleesi’s name. omg Now, this is awesome. I checked your past posts, like the ones with Creed, Dwight and Phyllis (one of my all-time favorites, that Phyllis) and guess what? Creed is just like Norbert! Black tuxie, white streak on his nose and forehead, white whiskers, attitude, same time of the year fostered in Crooked Acres. I mean, it’s wonderful, isn’t it?

It certainly is! And for that matter, Buttercup kind of has that same look, too – though she doesn’t have as much white on her nose. Here they are, side by side, Creed, Norbert, and then Buttercup.

Yikes! We have our first kittens to foster! Three little boys about 4 weeks, and a mom. They were only in the shelter two days and haven’t even had their combo test yet so that is high on the priority list, but for now they all seem to be thriving! I hope mine do as well as yours do!

First time commenter here, I’ve followed your site for a real long time and I’ve always so enjoyed your pictures, I love Crooked Acres! I hope you can offer some wisdom regarding traveling with cats: we are moving from Denver to LA, it’s a real long car drive, after weighing our options, me and my husband will have to drive with both of my cats in the backseat, it will be many hours, we will be driving during the day and stay at a motel at night. I’m curious if you have ever done a long drive with cats, should I keep them in the carriers the whole time? How will they use the litterbox? I thought it might be better for them to be out of the carriers and have some room to stretch out. My cats are pretty big, 12lb and 15lb, the carriers I have fits them pretty snugly, they can turn around but barely. Any insights would be helpful, I just want to make sure to make this as low-stress for them as I can. Should I consider getting a mild sedative from the vet? I am planning on putting a litterbox on the floor of the backseat. I’m hoping after the first 2 hours (ok, maybe 3 or 4 lol), they would settle down and not be too stressed. Any thoughts would be appreciated, thank you!

Oldcat had some great advice here.

I myself have only traveled with a cat once, when we moved from Rhode Island to Alabama. It was just the one cat, and my intention was to leave her in her carrier for the entire trip (it was a two-day drive), letting her out at regular intervals so she could eat and use the litter box. But she howled so loudly and so piercingly that after 10 minutes that plan went out the window. I let her out of her carrier, whereupon she IMMEDIATELY used the litter box (which was set up in the back seat), necessitating an emergency stop so I could scoop the litter box because OMG the SMELL. She was a general pain in the butt – she thought she should be sitting where Danielle was sitting, in the passenger’s seat, and if Danielle shifted even the tiniest bit the cat would claim the space for herself. I was continually having to pull her over to the side of the seat so Danielle could sit comfortably. That said, it actually wasn’t a bad way to travel, and we all made it safe and sound. I’m not sure I’d do it that way again, but it worked out okay so I’m not saying I wouldn’t, either – except, of course, that I no longer have ONE cat, and I can only imagine what traveling with 12 cats loose in a car would be like. I’m sure I’d end up on the news.

So how about it, y’all – got advice for Joy?

Whoa, Ruth has the most amazing blue eyes. Practically Fremen blue. How lovely.

I actually had to Google Fremen to figure out what Fremen blue is (it’s been a long time since I read Dune).

I like to say the father of Khaleesi’s litter must have been a White Walker!

Robyn, you don’t have to answer this… What’s up with Stefan (I think that was his name)?

I was actually going to do a whole post about Stefan, but I can’t seem to get a picture of him and I’m about to be busy for the next week and a half or so, so I don’t want to put it off ’til I do have the time. So, meet Stefan: 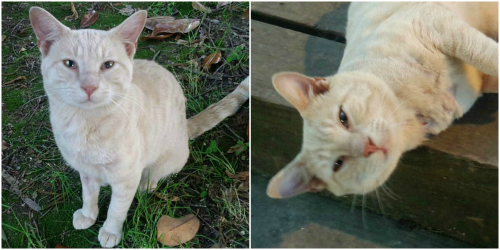 Those pictures are stolen from Fred, who posted them on Facebook.

We first saw Stefan back in, oh – sometime last Fall, I guess. We didn’t see him in person, we just happened to catch him on the gamecam a few times when I set it out to see who was showing up at the feeding station. Then we saw him in person in February. It’s been a very slow process, but Fred finally befriended Stefan, and last week he was able to grab him and put him in a cage overnight until we got him to the vet for an exam and neutering and his shots.

Fred was SURE that Stefan was going to be positive for Feline Leukemia, but his Combo test came back clear. He had worms in a bad way, but no fleas or ear mites since we treated him for fleas and ticks a few weeks previously.

So I guess we’re adding him to our outdoor cat population. I would have liked to perhaps tame him and have him adopted out, but he’s really half feral. He shows up a couple of times a day to eat and hang out on the side porch. Now that he’s neutered, perhaps he’ll stop SPRAYING (if there’s anything that smells nastier than unneutered male cat spray, I don’t want to know about it. GAH.) Maxi has no problems with him, but Newt would like him to GO AWAY NOW, PLZ.

I have no idea where he came from. The vet tech guessed him to be 1 – 2 years old. That actually puts him in the right age to be related to Stompers. And he looks a LOT like Coltrane. I have no idea if he actually has owners around here somewhere, but he was skin and bones and loaded down with worms. Hopefully he’ll gain a little weight.

So, that’s the story on Stefan, who has lately started to become known as Stefonzie (you can blame Fred for that.) “Bring down the hand for the belly rub!” Is it just me, or does it look like Scorch told a stupid joke and is proud of himself as everyone around him groans and rolls their eyes?

(My favorite stupid joke: Q: What’s brown and sticky? A: A stick. I can’t help it, I snort every time I tell that stupid joke. I’m sitting here smirking right now.) Scorch bites Ember’s paw while she bites his ear. While Ruth bites Ember’s leg, Ember looks around confusedly trying to figure out just WHAT is going on. “Wah! Make him stop BITING me!” Stressing out on top of the cat tree. Those toes are killing me. Aslan just LOVES that condo on the cat tree in my room. It’s the perfect size for him. Did I mention that the cat tree hammock is popular? Yeah, THEY don’t look guilty, do they? Leia loves to show off her delightfully spotted belly. I do believe we’re moving into the lanky stage.