The holiday cards are still arriving at my PO Box! I picked up about 10 the other day, and scanned them in yesterday. You can see them all here at Flickr, or scroll through them below. 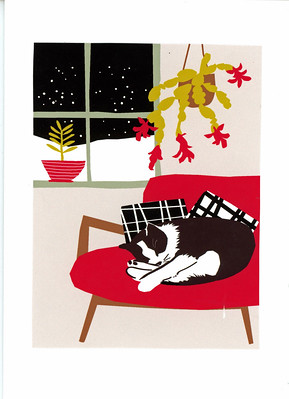 I am absolutely loving the cards – thanks once again, everyone! Uncle Charlie snoozing on the ham-mick… and Moira all “Excuse me, that is MY ham-mick.” “Lady, he’s on my ham-mick!” (Yes we do have another ham-mick, and yes I am going to bring it into the foster room.) Giving me the skeptical eyes. Considering coming up for a snuggle. Yes, her tail looks super long here, but I assure you, it’s the angle. In person it’s neither particularly long or short. So here’s where we are now with Moira: she does come asking to be petted, but she prefers it if you’re sitting (she doesn’t like it if you’re standing over her and lean down to pet her. She will allow the petting if you’re standing over her, but she skitters away pretty quickly.) She’ll now climb across my lap, but doesn’t stay there. She likes being petted – particularly on the head and around her face – but will often just turn and slap my hand (and when she slaps, it’s always my hand, she’s never slapped my leg or any other body part). She’s gotten better with the slapping – she used to slap with her claws out, but now slaps without claws. She knows I don’t like to be slapped, and gives me a guilty look when she does it. (When she was doing it with claws, I would immediately get up and leave the room. I don’t know that that’s why she stopped using her claws, but it could be.) I think she just gets easily overwhelmed, and now when she slaps me I stop petting her, she retreats a little way and looks at me for a bit, then approaches again for more petting.

(She slaps Fred too – it’s not a dislike of me or what I’m doing, she’s an equal-opportunity whapper.)

She likes it when I lie on the couch and hang out with her – she likes to hang out in the space between my legs and the side of the couch. She’ll walk back and forth across my stomach while I pet her.

Fred and I have both picked her up and held her – Fred’s done it more than I have – and she doesn’t love it, but she’ll tolerate it for very short periods of time. I’ve gotten the odd feel of her belly here and there, but she finds my attempts to touch her belly very RUDE.

Basically, she’s made a lot of progress in the past 2 1/2 weeks. I know we’re all anxious for kittens, but I think the longer she’s with us before she has kittens, the better. She’ll get used to us, get plenty to eat, and get a lot of play time in. She likes her visits from Charlie, but if he’s got important snoozing-elsewhere to do, she is perfectly happy entertaining herself. I heard the distinct sound of a cat licking fabric, and turned to see Archie with this catnip toy. Doesn’t he look GUILTY?