I received more holiday cards from y’all at the post office last week, and scanned them in over the weekend. You can see them over at Flickr here, or scroll through them below. If I receive any more I will, of course, add them to that Flickr album. (Y’all send the BEST cards!) 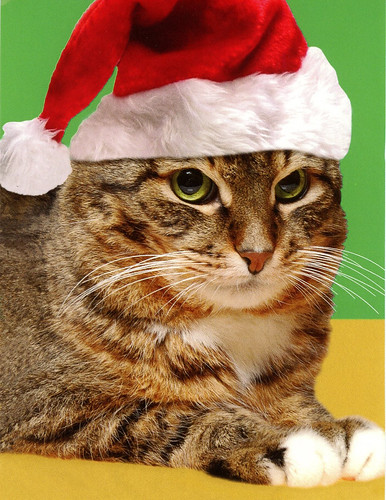 Since we’re now officially out of foster kitten pics, I figure I’ll clear out the folders in which I store my permanent residents’ pictures so y’all can see their sweet faces, and which will also force me to take more current pictures of them. In the sun on the covered porch. Hanging out in the back yard, all “What?” In a cleared spot near the covered porch. In the back yard with the Ears of Annoyance. Stomping across the yard (clearly in mid-summer.)

For the newer readers, Frankie is FIV positive and has stomatitis. He gets medication a couple of times a week – Atopica (cyclosporine) – for the stomatitis, and it’s working wonderfully. He’s doing well, sleeps snuggled up next to me some nights, and on the nights he doesn’t sleep with me, he sleeps on the recliner or the cat tree in my room.

In the past few months, Frankie and Jake have become buddies. We actually thought at first that Frankie was picking on Jake, because while they’re tussling Jake is pretty vocal, but as it turns out Jake starts as many tussles as Frankie does. They’re nearly always near each other, and Frankie will follow Jake around the back yard and hang out with him.

I think that in this relationship, Jake might be the wise old man imparting wisdom, lord help us all.

When they play-fight – which is every evening when they’re waiting for Fred to give them their evening sprinkle of Babycat as their night time snack – Frankie does this move which always cracks us up. He stands up, looks down at Jake, and then turns around and does his level best to put his back end on Jake. Sometimes he’s successful for a few moments, but most of the time Jake rolls away. Then Frankie tries it again and again and again. I desperately need to get it on video, because it’s hilarious.