Yesterday, GD asked if she’d offended me, because apparently I’d unfriended her on Facebook.

If we’ve ever been FB friends and currently are not and YOU didn’t unfriend ME, let me know! I don’t know the last time I unfriended someone on FB (I don’t think I have ever actually unfriended anyone), and I sure wouldn’t unfriend one of YOU guys, because you are my people. Either Facebook is randomly unfriending people in hopes of causing a brouhaha (POSSIBLE), or I accidentally hit something and unfriended you (ALSO POSSIBLE) or a cat ran across my keyboard and somehow hit the correct sequence of keys to make it happens (also POSSIBLE, but probably not likely. Okay, wait. I just looked at Sugarbutt. I’m going to call this a definite POSSIBLE.) So if you’ve said to yourself “I hate Robyn because she unfriended me for NO REASON”, rest assured: it wasn’t me! Friend me! I’ll friend you back! Promise!

Who knows who THIS is? Any guesses? Anyone? 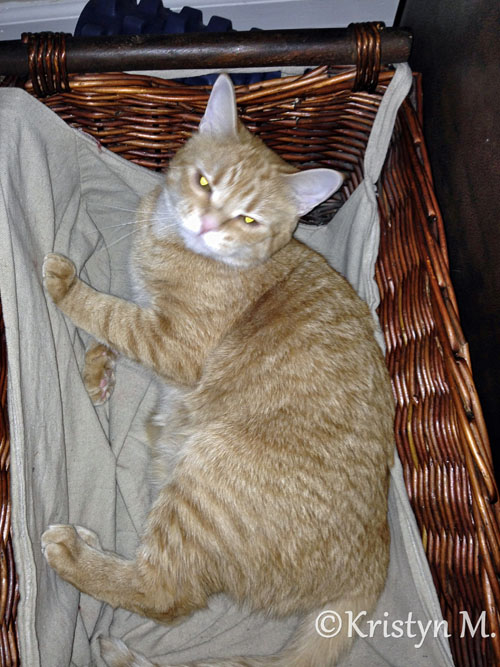 That would be our beloved Stompers, all grown up!

Kristyn said: All the recent updates made me realize it had been a while. Stompers is still happy, healthy, and as affectionate as ever. We got him and his sister, Wisp, those cat hammocks and they have been quite a hit. So much so that I taught my sons to sew by letting them make a Christmas cover for one of them. Which Stompers heartily approved of. He is a gigantic love bug!

Thank you for all you do for these amazing cats! 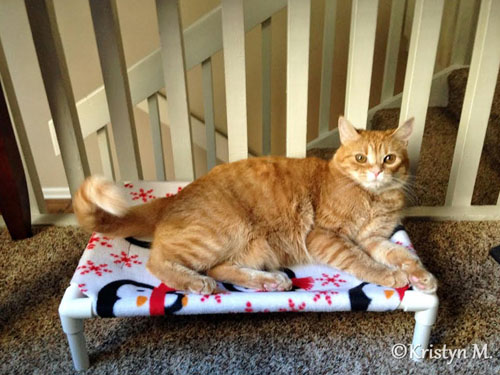 Thank you for the update and the pictures, Kristyn! I sure do love seeing his sweet face again. 🙂 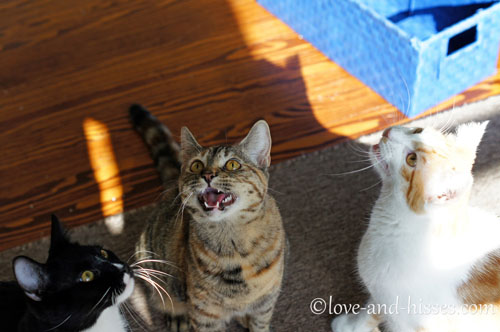 “Feather teaser! You get down here!” 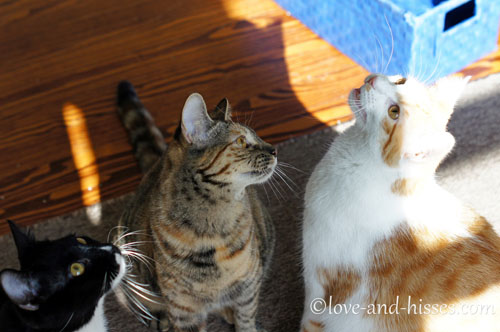 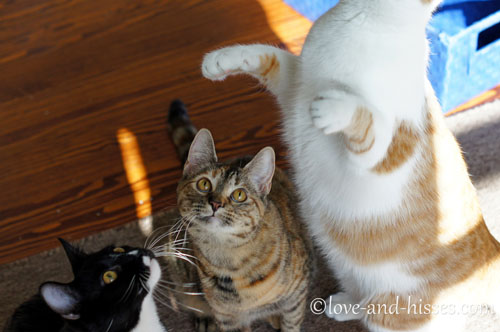 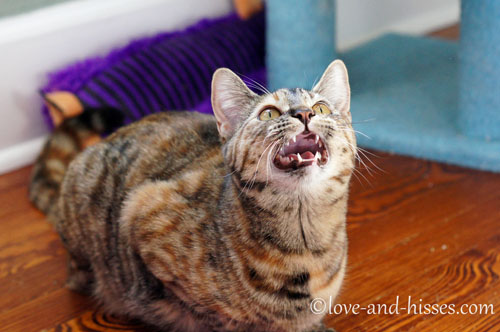 So Bunnie scolds the feather teaser a little more. 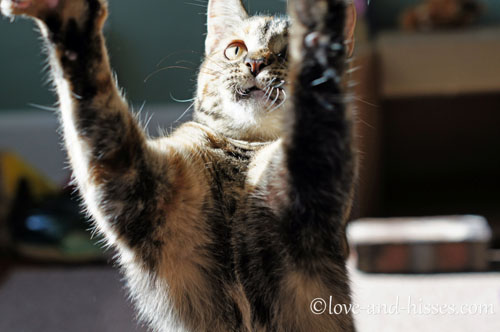 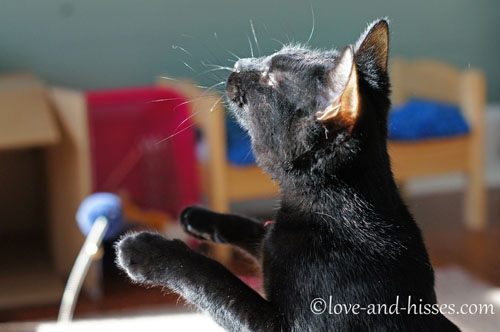 Tricki went after the feather teaser, but no dice. 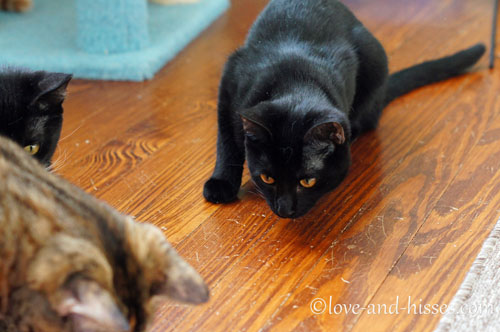 I’m not sure what Tricki’s staring at so intently, but I suspect it was probably the red laser dot. 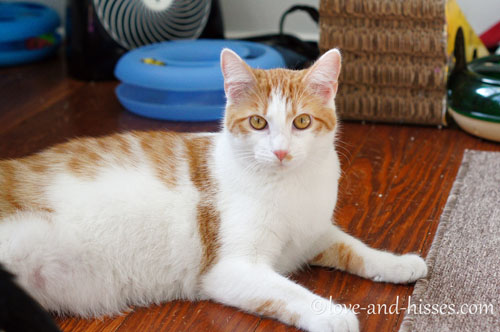 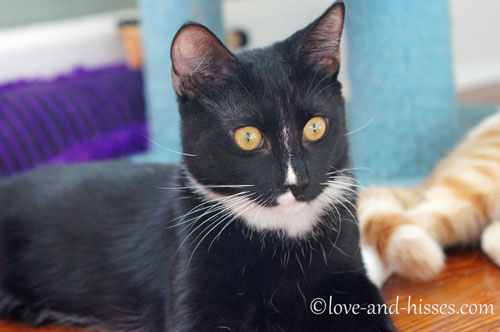 Toto kills me dead with his wide-eyed gaze. 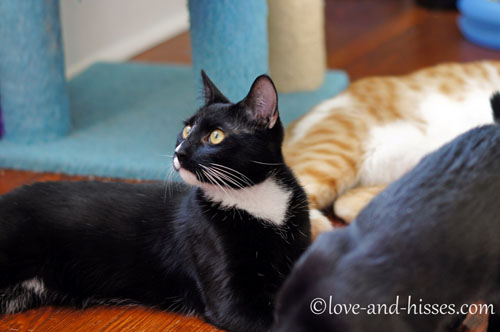 I decided yesterday that it was time to open the door to the foster room and let John Smith, Bunnie, Toto and Tricki have the run of the upstairs. I initially wasn’t going to do that because after the summer and fall we had, I figured the permanent residents needed a little time where they were the only cats who had the run of the house. But yesterday I realized that the permanent residents really aren’t spending any time upstairs, so we put the gates up across the bottom of the stairs and opened the foster room.

Except for Bunnie, who made one very quick, nervous foray into the bathroom and then immediately ran back to the foster room, none of them even left their room. So I shut the door (because Alice was giving me the eyes of “I don’t want to STAY upstairs, but I want to know I can get there if I want to!”) and took down the gate. We’ll try again tomorrow. I’m sure it won’t be very long before they decide that it’s not so scary out there! 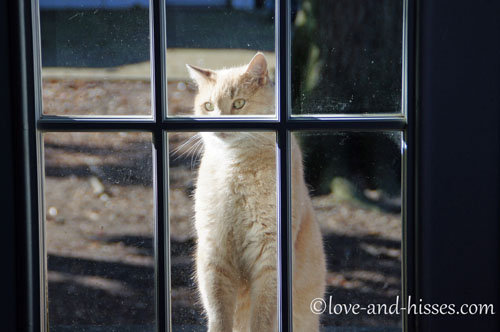 “Hello? Anyone in there?” 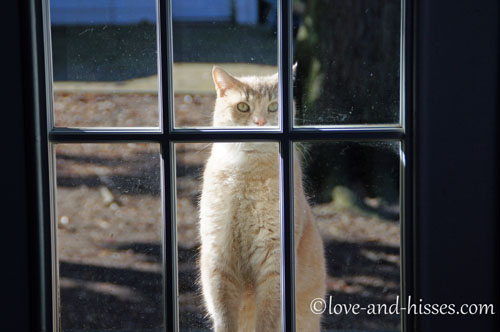 (Note: Those pictures were taken a few weeks ago, before it got cold out. In the past couple of days, Newt’s been flopped across the heating vent in the dining room pretty constantly. I just didn’t want y’all to think I was letting him take his silly self outside to get all frostbitten!)