I have 2 10-year-old-ish cats. I currently live in upstate NY and just took a job in GA. It’s a 15-hour car ride (2 days). My SO is staying up here.
I’m contemplating bringing one of the cats down with me. But, I’ll be going back up North for the summers. The cats get along and play, but don’t seem particularly bonded. I realize we would have to do a full re-introduction every time we return.

Is this just a terrible idea? I love both my kitties, but she’s just my special bean. She greets me every morning for a snuggle, and comes to snuggle every night before bed (I’m allergic, so she’s not allowed in the bedroom). Now that I’m working from home, she also demand an afternoon snuggle.

This is going to be a hard year for me and I hate the idea of being all alone, but I’m also afraid that the travel (and reintroduction) will just be too stressful for my (ahem) middle-aged cat. I’d be interested in hearing if anyone has experience or informed thoughts on the matter (particularly with regard to the well-being of my Bean).

It’s my opinion, having never attempted to do anything of the sort, that it’s worth a try. If you get to GA and she absolutely hates it (the kitties might be better friends than you realize) or the reintroduction to the other cat is really hard on the first trip back, you could just… not do it again. I actually don’t have a lot of advice/much of an opinion on this, but I’d love to hear what others think!

Have you heard anything about Charles and Caroline?

Not recently – they have an Instagram page and a Facebook page, it’s been a while since there were any posts there, but I expect that they’re doing just fine.

The Cone of Silence post from Love Meow was re-posted today over on Cutetropolis.com. I said to myself, I recognize that cat mama and kitten! Bunny and Clyde!

If you aren’t following Cutetropolis, you should be.

That is too cool – and I agree completely, Cutetropolis is definitely worth a follow!

How has life resumed for the permies now that Kara and Frankie are gone? I have an older cat that has suddenly come out of her shell after one of my even older cats passed and I can’t think of why. It’s strange, sometimes, the dynamics of the clowder. Just when you think you know them well, something like that happens and you get a wonderful surprise.

Hope your permies are coping well. By the pics it seems as if they are. Life goes on…*deep sigh*

Khal, Dewey and Newt haven’t changed at all. Jake is seeking more attention from the other cats (especially Khal); I am sure he misses his BFF Frankie. He’s not doing it in a desperate way, it just seems to be that he wants attention from another cat, and so he goes to the cat who is willing to give him that attention. (Newt will tolerate Jake for a while, but gets annoyed pretty quickly.)

Archie seems to be a bit calmer – he’ll still occasionally pick a fight with another cat, or I guess I should say he TRIES to pick a fight with another cat. He tries it with Khal, lord does he try, but Khal is the epitome of live and let live and just looks at him like “What?” The other night Fred saw Archie LICK KHAL ON THE HEAD, so I guess I’ll say that’s a relationship that’s going in a different direction than I would have expected.

The biggest change has been Alice. I think Frankie used to try to play with her, which would freak her out (she didn’t consider it playing, she considered it threatening when he’d start following her), and she would spend a lot of time hanging out in her house on the screened porch. Ever since Frankie and Kara have been gone, Alice spends nearly her entire day in the back yard, checking everything out. This year – as opposed to last year – we got a lot of live chipmunks brought onto the screened porch and into the house. Last year they were dead before we ever saw them, so I think Alice is quite the hunter, she’s just not the killer Kara was. If Archie starts to follow Alice around, she’ll either ignore him – whereas before she would have run from him – or if she’s not in the mood for his nonsense, she’ll smack him. Occasionally, she’ll even pounce at him like she’s playing, and he doesn’t know how to react. Alice and Jake have always been buddies, and that continues.

Life does go on, and the cats are adapting to the change pretty well, as they always seem to do.

I love how all of the blankets on the couch are cat-themed. Come to think of it, I can’t imagine it would be any other way.

I have to stop myself from buying more blankets for that couch because there are SO MANY cute blankets out there. But I have three pairs of blankets, and I think that’s enough… for NOW. Prince Benjamin has a snooze. Bugs is still enjoying that scratcher. Clyde’s all “What you DOIN’ down there, lady?” Lola and Honey are enjoying that tree. (That tree is the Molly and Friends Picasso – link for reference, though I spent about $150 on it. I bought it several years ago at Home Goods with money I got for my birthday (it should not surprise you in the slightest that I would spend birthday money on a cat tree). I don’t see it available online anywhere, but it’s possible I just didn’t dig deep enough. It’s a great cat tree, nice and solid, and the fosters always love it.) Honey has a Face of Constant Existential Angst. Cutey has a think. Bunny’s fur is definitely starting to grow in nicely. 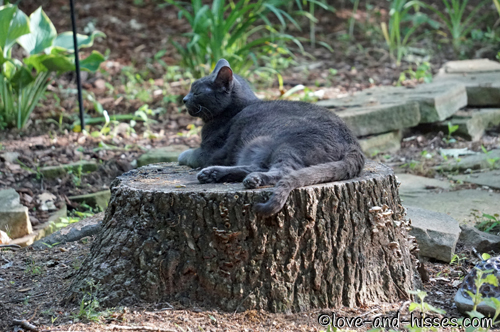 Jake on his throne, lookin’ smug.