Churu is? A supplement, or just a treat for kittens?

It’s a treat – it’s like a tube of baby food-consistency food that comes in a tube, and you tear off the end and squeeze the food out and they’ll lick it off the end (or you can squeeze it onto a plate if you prefer.) The majority of the kittens I’ve offered it to think it’s AWESOME (I think I just started with Los Mewchachos), and Jake and Archie are also big fans.

It’s made by Inaba and you can find it at Chewy, Amazon, Target and Walmart (I haven’t seen them in Target, but I also haven’t looked for them there either, since I get them with my cat food auto-ship.)

And it’s our annual Baby Stompers throwback!! If you can (and want to, I mean it is your blog!), you should do a daily link-throwback to a random Stompies post and introduce your new readers to the marvel that was Stompers.

I was TOTALLY going to do this, but I (as you may have noticed) completely forgot that I was going to!

Do cats ever have conjoined twins?

Interesting question – I haven’t heard of them, but I would imagine that in most cases they don’t live beyond a few hours, if that. (A Google search says that there are conjoined twin kittens born, but I didn’t look beyond that because I’m pretty sure pictures would make me sad.)

The Fluffles page says that Bunny gave birth to SIX kittens. There were FOUR. Just in case you want to fix that.

Deb said: Hi, she gave birth to 6 but 2 of them died before they got to Robyn. Cutie and Clyde came in about a week after the Fluffles and they are about a week younger than Bunny’s kittens. Their whole history is documented here, good reading.

Deb’s correct, Bunny did have six kittens, which is included on their page. One passed away pretty soon after birth and the other passed away just a day before they came to me. Bunny was in such rough shape that it’s amazing any of them made it, but they’re definitely thriving!

Oh I teared up again over Dennis’ adoption post…what a sweet boy. I know you still miss him. ❤️ 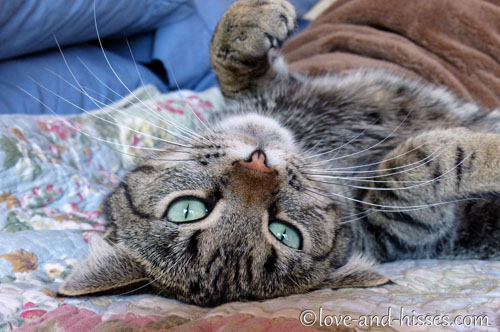 I miss that boy so much. He was the BEST, and he would have loved living here (and he was such a good uncle to the fosters!) For those of you who are newer readers, Dennis was one of our fosters back in 2014, added to the Players litter. When they went to Petsmart, he didn’t react well and ended up coming back to us while we waited for his people to come along. It turned out that we were his people.

In 2017 we were having work done on the house. We locked the permanent residents in the bedrooms while the workers were here, but I thought Fred had gotten Dennis and he thought I had, and to our horror Dennis escaped the house and was struck by a car; I kick myself about that to this day. He sure was the best, sweetest boy. Clyde fills up the Cuties box. Hangin’ out with Mama. Honey looks like she is SO over my nonsense, but she was purring and purring. She has Resting Tortie Face. Benjamin, just hanging out by the washer and dryer. As you do. Bunny and Clyde have a snuggle. In the next moment, Lola smacked at Bugs’s tail. I feel like he knew it was about to happen. Clyde is such a proper little gentleman with his crossed paws. Lola looks so smug, and Bunny looks so “Tell her to get out of my box.” When Honey and Benjamin’s family was here the other day to meet them, their little girl filled up the mouse cave with toys, and the kittens thought that was AWESOME.

I don’t think I mentioned that Honey and Benjamin’s new family were coming to see them the other day. Honey and Benjamin will have two young children to play with as well as two older kitties (one 9, one 14, I believe). I never know how the kittens will react to strangers and to small kids, and Honey wasn’t bothered in the slightest. Benjamin took a little longer to warm up (that doesn’t surprise me), Cutey hid at first and then came out to see what was going on, and Bugs was all over the place checking things out. Lola wanted nothing – NOTH.ING. – to do with any of them, which did surprise me – though I don’t know if it was strangers in general she objected to, or the kids. I bet she’d warm up over time. Clyde was hiding under the cat tree, but if something was going on, he’d pop out so he could see it. Oh, that Newt. Such a serious face, such a pretty boy!