Bunny came to Forgotten Felines of Huntsville on April 11, 2020. Her story: A skunk had been coming into someone’s garage, so they baited a trap with berries and set it in their garage. It very quickly caught the culprit – only instead of it being a skunk, it was a very hungry, very thin long haired black and white cat who was horribly matted. She’d dug so hard at the fur under her chin that she had an awful looking wound there. When Michelle got her, she and Brittany started shaving the matted fur off. Brittany noticed that this was no ordinary cat, this was a PREGNANT cat. So pregnant, in fact, that 10 minutes later she went into labor!

When all was said and done, she gave birth to 6 kittens on April 11th. As you can see, they didn’t get much of her fur shaved off before she went into labor; they shaved the rest a few days later.

I suggested, since it was the day before Easter, that they name her Bunny. And they did!

Bunny wasn’t producing much milk at first, so the kittens had to be supplement-fed with bottles for a few weeks. Unfortunately, the smallest kitten, who was struggling from the beginning, passed away after a few days.

Bunny needed a little more space than she had at Michelle’s house, so it was decided she and her kittens should come here. Unfortunately, the day before they were to come here, the smallest kitten, Peter Cottontail (an absolutely gorgeous little house panther with a smokey undercoat), passed away. The remaining 4 kittens are doing great – to be honest, Bunny was in such rough shape when they got her that it’s kind of amazing these 4 kittens are doing so well.

Bunny’s fur is starting slowly to grow in, but the wound under her chin is taking its sweet time to heal. It looks MUCH better than it did, but has a way to go – and needs daily cleaning and redressing. (As of May 24th, Bunny is wearing a soft cone to protect her wound from scratching.) As her kittens get older and start to eat on their own, hopefully Bunny can retain some of the nutrients she’s expending feeding them and will heal faster. (She has been tested and is FIV and FeLV negative.)

A group of wild rabbits is known as a Fluffle, and could that be any more perfect? So the litter is known collectively as The Fluffles. But wait! There’s more! On May 22, the Fluffles gained two new add-ins. They were turned into a rural shelter as strays, and we thought we’d see if Bunny wanted to mother them. She very much did NOT want to mother them, but as the first week drew to an end, she’s tolerating them and they’re completely integrated with the other kittens. (I believe Clyde and Cutey are about a week younger than the other kittens.)

You can read about Bunny and her Fluffles beginning here. Cutey and Clyde show up beginning here. There are links at the top and bottom of each entry; click on the one on the right to take you to the next entry.

You can see all the pictures taken of the Fluffles here at Flickr, or scroll through them below. 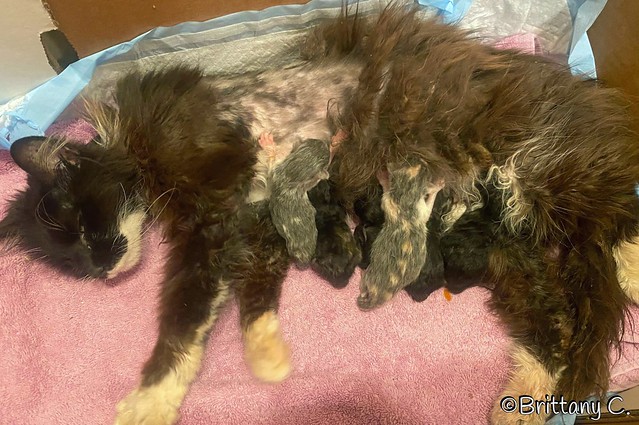