The Starks – named after characters from the Game of Thrones show/books – came to us on June 20, 2013. I happened to be standing in the vet’s office waiting for a result on a test, when a woman walked in with three little kittens in a plastic container. They were about 10 days old and had been abandoned by their mother. The woman who brought them in said that there was a fourth kitten that she couldn’t find.

(An hour later, she found the 4th kitten – Hodor – and the shelter manager brought him to me.) They’ve been with me for a week now, at the time of this writing, and are doing wonderfully well!

You can see all the pictures of The Starks over at Flickr, or view the slideshow of all their pictures at the bottom of this page.

You can read about the Starks beginning here (there are links at the top or bottom of each entry; click on the one on the right to take you to the next one).

Edited to add: On September 9th, Arya went to Charleston, SC to live with Kathy and Mike and their 3 year old kitty, Buddy!
On September 14th, Jon Snow was adopted (after only 1 1/2 hours at Petsmart!) by Nichole, who adopted Beans (formerly Baby Beans) in March!
Also on September 14th, Hodor and Brandon were adopted – together! 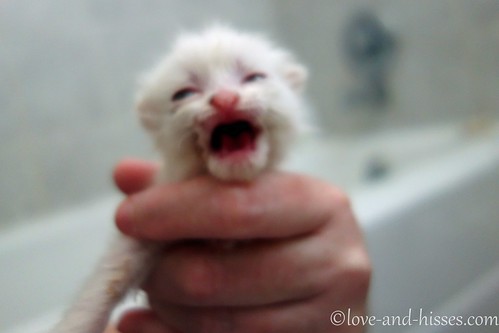